I only realized it was spring after seeing the google doodle (who needs a calendar when you have google? It’s become so rare to see the plain, unadulterated google logo).

So yes, spring it is, and, fittingly, the letter for March Alphabakes is “S”! Alphabakes is run by Ros, the More Than Occasional Baker (who is the current host) and Caroline of Caroline Makes.

That being said, while technically it is spring, it hasn’t really gotten around to the spring like weather and greenery that one might hope for here. (Nor does it usually, so it’s true that I don’t normally hope with a great deal of conviction).

This cake is a spring-sort of cake (and even a sponge cake!) as it’s for wishful thinking of spring. It has some spring-y flavours but all of them are preserved from other times of the year.

And no, I didn’t cheat, as the true ‘S’ ingredient is spelt flour. I’ve seen some lovely whole grain baked goods around as inspiration, including this recent stunning example from the multitude at With the Grains.

While the sponge cake had a pleasant, cotton-y texture, it was otherwise a bit of a disaster. My sponge cakes usually turn out quite stout (as I beat every last bit of air out when folding), but this time the batter remained quite light, rose to a billowy height in the oven, and then collapsed. I’m thinking a couple things: perhaps I needed to bake it more, use more flour (I liberally played around with the proportions this time), or try cooling it slowly in the oven.

I enjoyed the flavour of the spelt flour. And while initially I was too distracted by the spelt to notice, the rest of the flavours, orange, lavender, and chamomile, did come through as one floral sort of note.

I also can’t wait until the rhubarb has grown–texturally, the stewed rhubarb would be so much more pleasant with fresh rhubarb instead. Then it could be cooked until just tender and still a bit toothsome. However I did quite like the rose flavour with the rhubarb; that was a surprising discovery that I may revisit later.

Altogether, it was an appropriate way to start spring (if only due to the fact that I didn’t have any fresh ingredients to use). Both the creme anglaise and rhubarb are very sauce-y, so they work well with such an absorbent cake. I think it would be even better paired with a less flat (yes, yes, yes!) and drier sort of sponge cake, such as the old-fashioned sponge cake from Poires au Chocolat (which remains one of my favourites).

A bit in retrospect, it seems I borrowed inspiration from the rhubarb soup with chamomile cream from Bar Tartine by Nick Balla and Cortney Burns.

The proportions are adapted from a sponge cake my sister made once; I have it noted down, but without any indication of the original source, unfortunately! The methodology was adapted from “the foolproof sponge cake” in The Baking Bible by Rose Levy Beranbaum where, if I recall correctly, the flour is beat into the egg yolks and then the egg white is folded in. I think the methodology is quite nice, it just didn’t seem to work out for me this time.

zest of half an orange

Beat the egg whites until frothy, slowly add the sugar and continue to beat until you reach stiff peaks. Set aside.

Beat the egg yolks with 60 g of the sugar until thick and ribbony. Beat in the orange zest, tea and lavender. Beat in 1/3 of the flour at a time, alternating with the milk.

Fold in one scoop of the egg whites to lighten, follow by the remaining egg whites.

Scrape into the prepared pan and bake until well browned and an inserted skewer is removed clean.

Remove to a wire rack to cool.

Stewed rhubarb with orange and rose

If you have fresh rhubarb, cook until just tender (and call it poached rhubarb). Since I was using frozen rhubarb from last summer I cooked it until heated through—it’ll be a bit mushy regardless.

juice of ½ an orange

a few spoons of sugar

Slice the rhubarb thinly. Heat the orange juice, sugar, and dried rose in a pan until sugar is dissolved and mixture is steaming. Add the rhubarb and enough water to partially cover. Bring to a simmer, then turn down heat and remove once cooked.

The proportions were a bit arbitrary, but I figured I could keep on cooking it until it reached the consistency I wanted. I ended up cooking it over very, very gentle heat for around 8 minutes.

Heat milk in a small saucepan until steaming. Sprinkle in the chamomile tea and set aside to steep for around 10 minutes.

Strain the milk and return to the saucepan. Whisk in 2-3 tbsp of cream. Heat until steaming.

Whisk the egg yolk and sugar until combined. Slowly pour the hot milk mixture in while whisking to temper the eggs. Return to the saucepan and cook over gentle heat, stirring constantly, until the crème anglaise is at desired thickness and at least coats the back of a spoon. 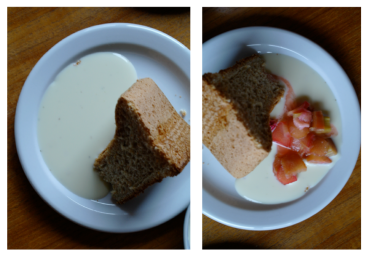 Serve all three components together. The crème anglaise is nicest when warm. I think it looks best when the plate is flooded with creme anglaise and then some of the stewed rhubarb is placed on top. Garnish with some additional dried lavender.

8 thoughts on “a spring-sort of cake”

I haven't decided what to write here yet. I'll leave it until later then. But for now, more here