I think previously it was the combination of the price and popularity that made me sort of wary of macarons and a bit skeptical about sincerely liking them. I got serious about the circles.

It always starts off a bit stressful when we carefully cut each one (each a different flavour of course) into quarters (which I love doing) and then insisted that someone else have the last piece (which can be a bit more tiring, but also a time-honoured family tradition). The fact that each macaron cost a fair amount only made it the more imperative that they be enjoyed–and eating something while focusing on how much you really ought to be enjoying it is not the best way to actually enjoy something. Then there’s the popularity. Things often become popular for a reason, but I also couldn’t help wondering whether I was only interested in eating macarons due to subliminal pressure from their fetishized status. Sort of like cupcakes–I loved them when I was little until I realized that I sort of prefer big cakes more. (Maybe because I could cut whatever size slice I wanted with minimal parental disapproval…) (I still like cupcakes though. Since, you know, they’re cake.)

However after making this batch of macarons I’ve finally realized why they’re so popular. Texturally, the shell is thin and crispy and wonderfully chewy on the inside. Once they’ve been refrigerated, the shells take on a softer texture, they seal together with the filling so the slight textural contrast comes from the very outside of the shells, while the rest is soft through to the middle. Macarons serve as the perfect canvas for highlighting flavours.

These are things I only truly noticed after having such a ridiculous abundance of macarons of one flavour that I didn’t have to be so tense and careful while eating them. In fact I could eat multiple in a row. And I did.

This is also why I like big cakes and messy cakes: my horrid piping skills!

This is not to say that I prefer making macarons at home–knowing that I actually like them, I can feel less guilty about buying them! And the variety of flavours you can find at a bakery is something very difficult to replicate at home all at once. 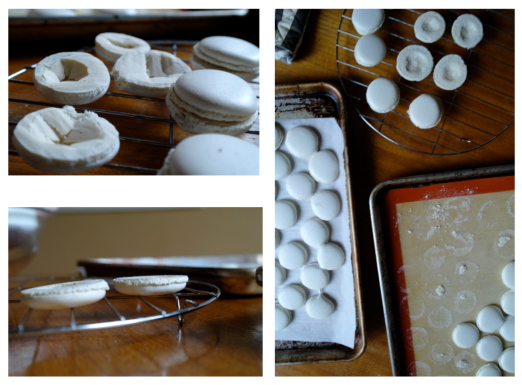 But I’m very glad that I’ve made them–so thank you to Lili’s Cakes for the inspiration and lovely Italian meringue macaron shell walkthrough!

I also remembered, in this process, why I only ever made macarons once a few years ago and then never again: the grinding and sifting! I might get a bit faster next time though: I experimented using a food processor, blender and spice grinder. In the end the food processor is still the best bet. The blender did a decent job, however it can only grind a very small amount at a time and so it was a bit tedious emptying it out and refilling it. The spice grinder did rather well too, but it also has a small capacity and it started to smell a bit like burning plastic so I got a little bit worried and quickly unplugged it. The food processor was able to take everything all at once–it just took a while before the almonds were sufficiently ground.

The rhubarb hibiscus curd was lovely—sour and sweet and very buttery. The hibiscus was also very useful in colouring the rhubarb curd—otherwise, I likely would have chosen to infuse the rhubarb curd with rose instead. The hibiscus gave it a more citrus-y taste, for lack of a better word, but in retrospect I may have preferred the floral taste that rose would have given instead. But at least I was able to finish up the frozen rhubarb from last summer with this post (I also used a bit of it here)! I’ve made rhubarb curd of some manner a few times now (this is one of my few truly original ideas, so I’m quite pleased to finally post about it) and I’ve noticed that the colour is very dependant on your batch of rhubarb. One of our plants produces really pretty red stems, and the colour of that curd is also usually a pleasant pale pink. Other times though, even while the syrup is so incredibly vibrant, it can’t stand up the egg yolks and turns into that dreaded unappetizing beige.

Since I don’t love food colouring, I put 2 g finely ground hibiscus in the macaron shells. I suppose I was vaguely hoping it might provide some colour; I’m not sure if you can see in the photos, but it left the batter a bit speckled—brown from the outside, but when you break one of the macaron open, the inside is sprinkled with dark red specks like confetti. It’s actually quite pretty. The flavour came out as well—the shells were a bit tart and fruity. I think it would be too overpowering if I were to add enough ground hibiscus to give anything closer to a uniform colour, or even just a more distinctive spatter. Speaking of which, I think it might have looked nice to sprinkle a bit of the more coarsely ground hibiscus over top of the shells before they were baked.

Finally, happy Fiesta Friday! Kindly hosted by Angie, the Novice Gardener, Julianna, the Foodie on Board, and Hilda from Along the Grapevine. It’s been a tiring week, so I hope these macarons are a good way to celebrate!

I made around 84 macaron shells and 33 fully assembled macarons (using 66 shells) from the amount of filling I had. These macarons, because the filling is so wet, are best eaten only in the next day or two after refrigeration.

This Italian meringue macaron shells recipe is from Lili’s Cakes–I recommend taking a look at the original recipe as it’s well annotated with lots of helpful details! I made a total of approx 84 macaron shells of varying sizes. I used 5 and a bit egg whites.

Line 3 sheet pans with parchment paper. Draw 4-cm diameter circles 2 cm apart on each sheet of parchment paper; flip over so that the pencil or pen is against the tray.

Grind together the almond and icing sugar in food processor. Sift through a fine sieve.

Grind the dried hibiscus in a spice grinder until finely ground.

Meanwhile, mix the sugar and water in a small saucepan and bring to a boil. Monitor the temperature until it is close to 240F. At this point beat the eggs a bit with a wire whisk to “refresh” them.

Once the sugar has reached 240F (softball stage is what we’re aiming for), remove from the heat. Pour it in a slow stream into the egg whites while whisking steadily. I found placing the bowl on a wet towel helped it keep from slipping, and agreed with Lili’s advice–it’s great if you can have someone pour the sugar for you or steady your bowl.

Once all the sugar has been incorporated, return the bowl to the mixer and beat until the meringue is stiff and the bowl is barely warm to the touch.

Mix the remaining 75 g egg whites into the almond and sugar mixture, followed by the ground hibiscus.

Lighten with a scoop of meringue. Then fold in the remaining meringue, all at once, using a rubber spatula. Continue to fold until the batter becomes a bit looser and shiny—ribbons of batter should slowly flatten out in around 30 seconds.

Fill a piping bag, fitted with a wide round tip, with the batter and proceed to pipe the shells.

Allow each tray to dry until the macarons have formed the slightest crust—20 minutes; less for me since it’s fairly dry where I am (it’s also lucky I’m a slow piper since I completely forgot about this step, and only coincidentally allowed the shells enough time).

Bake each tray for 6 minutes; then rotate the tray and bake for another 6 minutes, or until the bottom of the macaron shells have formed a thin crust and can be loosened from the tray.

Let the shells cool until they are a bit firmed before removing to a wire rack. Cave in the bottoms of the shells to create additional filling-space, and pair up with a shell of the same size.

Adapted from lemon curd recipe in Baking by James Peterson. This could be done using more egg yolks if you still have extra from your madeleine shells. I only barely got 125 mL from 310 g, so perhaps use some more rhubarb. The hibiscus can be left out, but do be aware that your rhubarb curd may or may not be pink! I made enough filling to fill 33 macaron of varying sizes to varying degrees of filled-ness.

Chop the rhubarb, place in a saucepan and heat gently until the juices start to come out. Bring to simmer and continue to cook until rhubarb is soft and falling apart. It may help to add the sugar if you’re using fresh rhubarb, or a bit of water or lemon juice.

Once the rhubarb has mostly drained, perhaps half an hour to an hour, squeeze the jelly bag to extract as much juice as possible. It would be good to get 125 mL of juice.

Place the juice in a saucepan and bring to a simmer, add the dry hibiscus, cover, remove from the heat and set aside to steep at least 10 minutes. I left the hibiscus in while making the curd to continue to add colour/flavour, but it could be removed after steeping.

Add the sugar and eggs to the rhubarb juice and gently warm, while whisking constantly. As it warms, stir in the butter in pieces. Continue to cook gently until rhubarb curd is thickened. This can also be done overtop of a double boiler, in which case you may be able to skip sieving the curd.

Once the curd is done, press through a sieve and chill until cool.

Fill a piping bag with the rhubarb curd and use to fill half of the macaron shells—leave a border around the edges. Top with the other half and squeeze slightly until filling squishes out to meet the edges of the macaron. 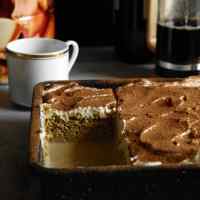 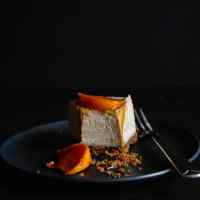