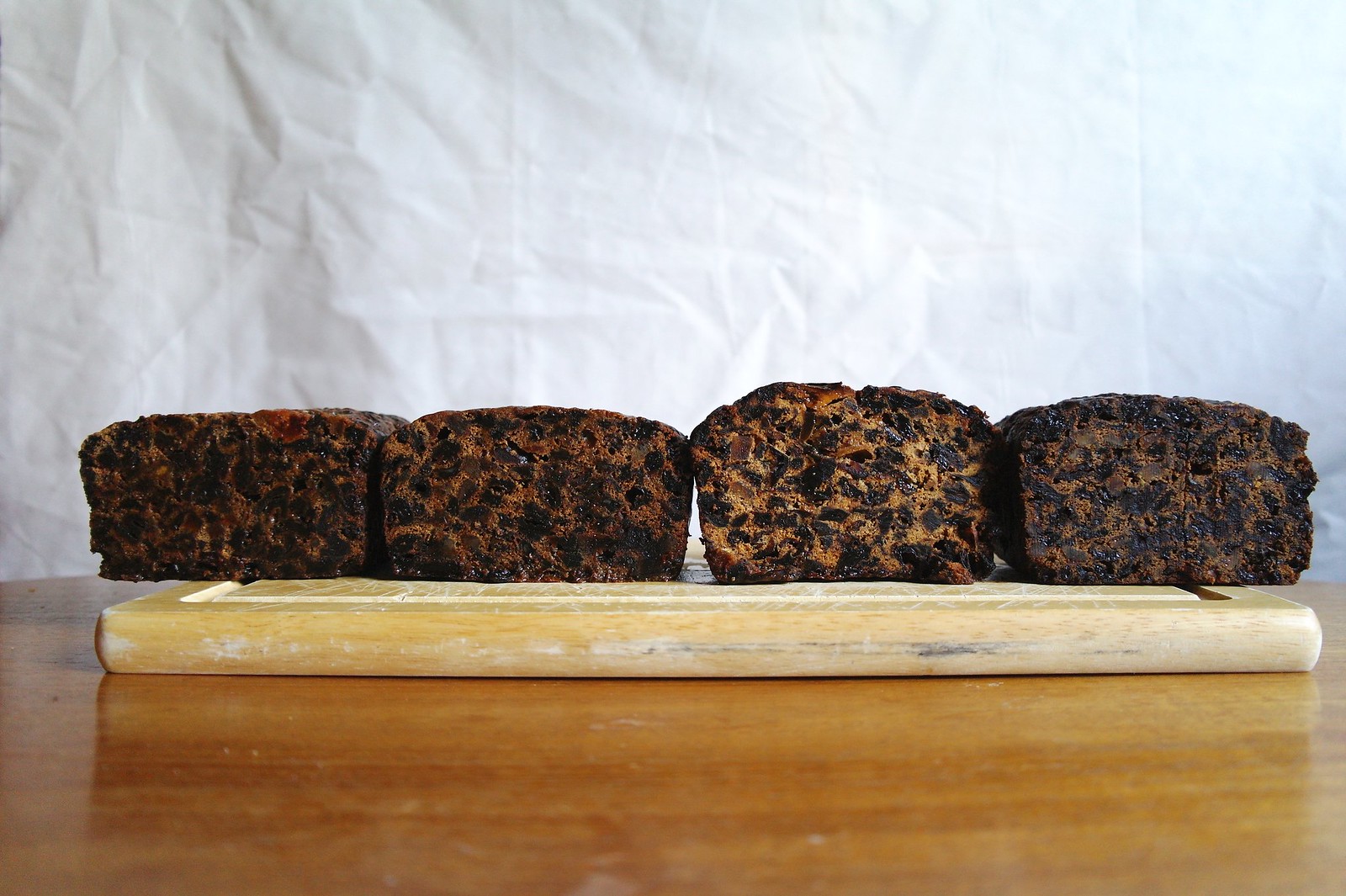 My mum began making fruitcake a couple decades ago, and since then the original grainy photocopy has been marked over and crossed out numerous times, black pen scratched over blue pen scrawled over pencil. I love that I’ve been able to step in a bit later into the development, at the point where the process already carries the familiarity, expectations, and experience of a tradition. 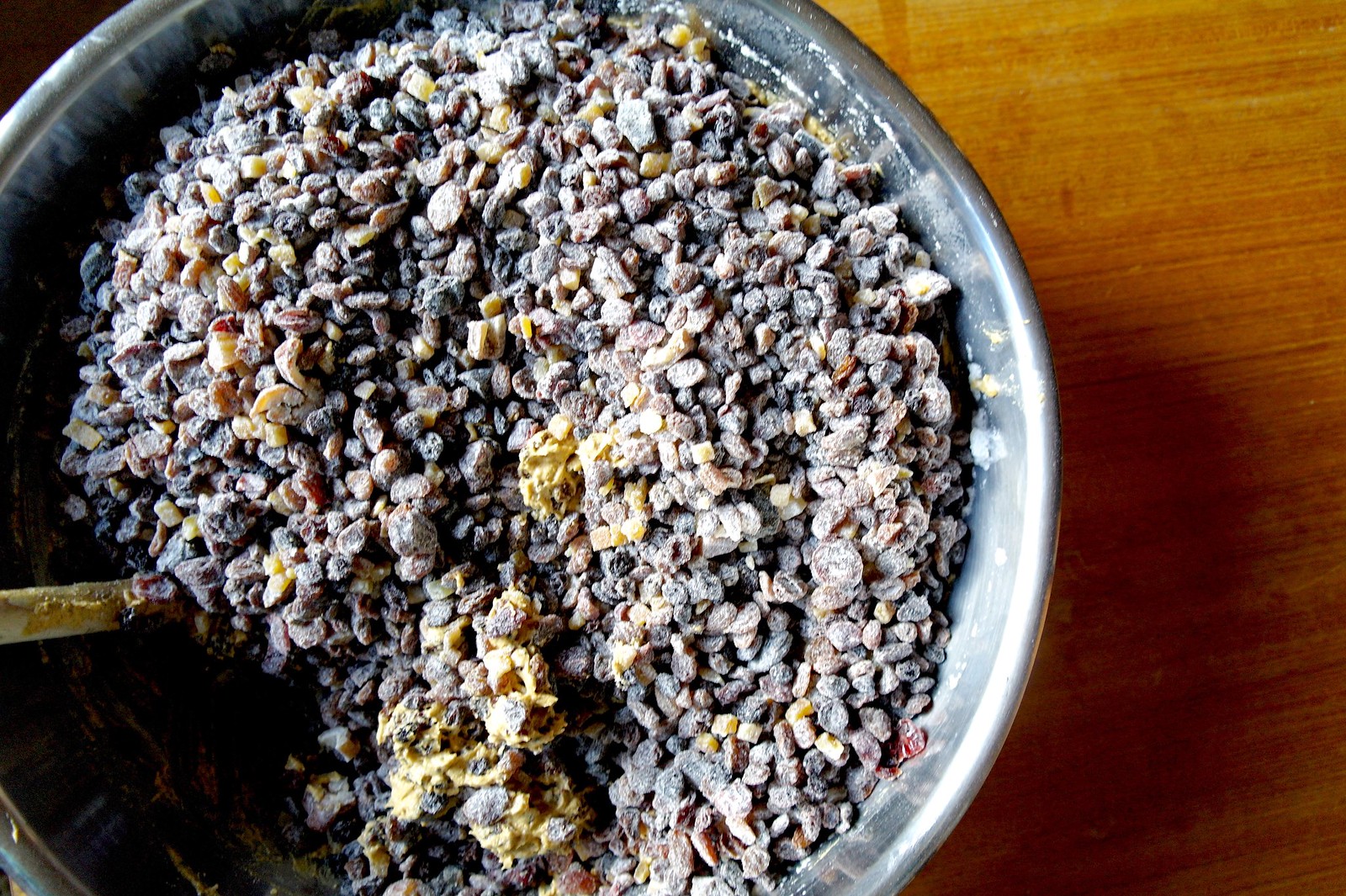 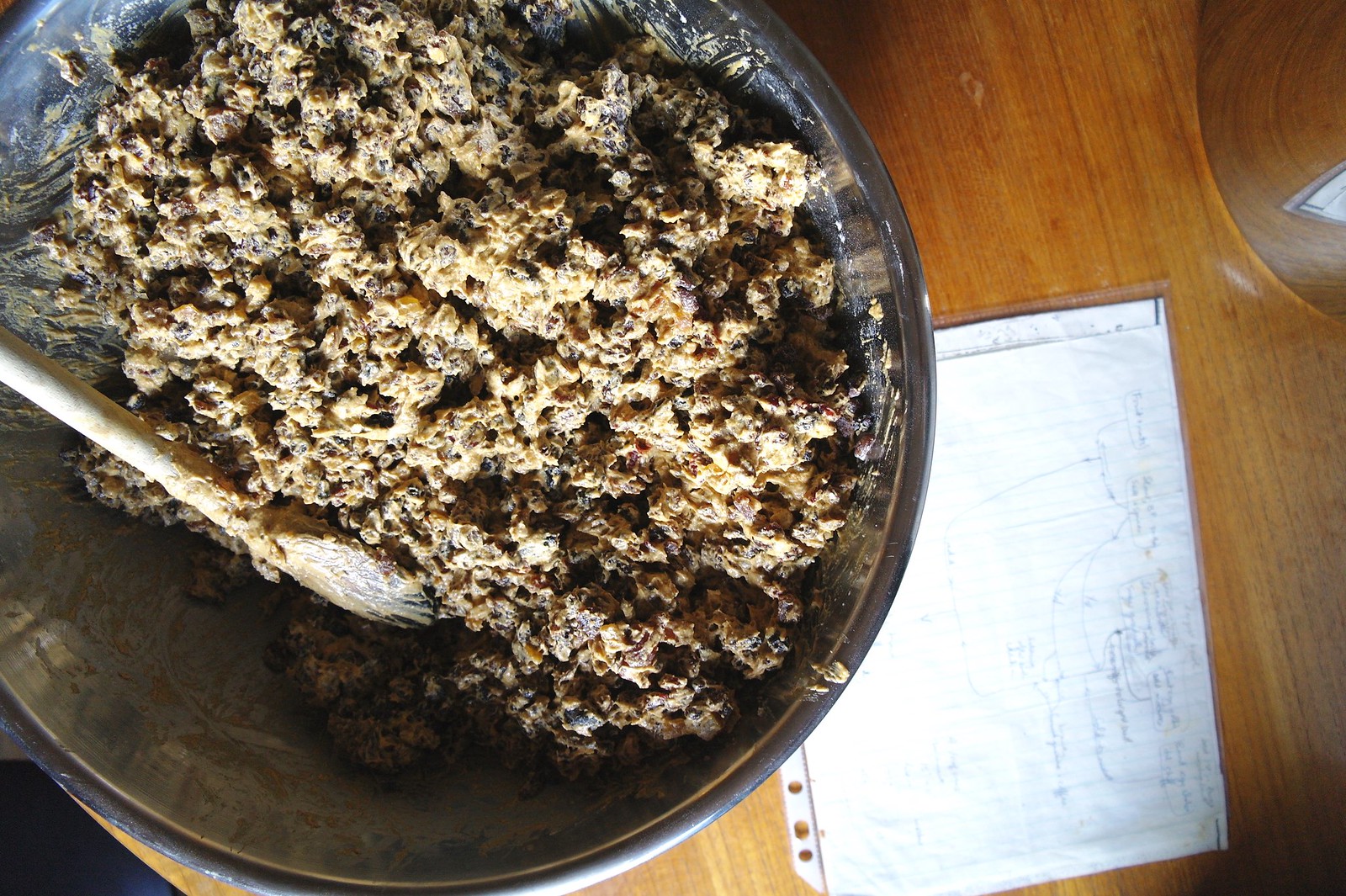 Fruitcake is somewhat magical. It looks a bit mysterious already–dark, ambiguously and blockishly shaped, heavy with aromas once unwrapped. I remember unearthing a fruitcake just barely my junior a few years ago, which, once peeled out of the crystal-encrusted cheesecloth was dry, musty, but (amazingly and unfortunately) somehow passable and might be considered edible. We sawed off a few slivers to sample before tossing it–though after reading this story, while they do have quite a head start on us, we really should have kept it! 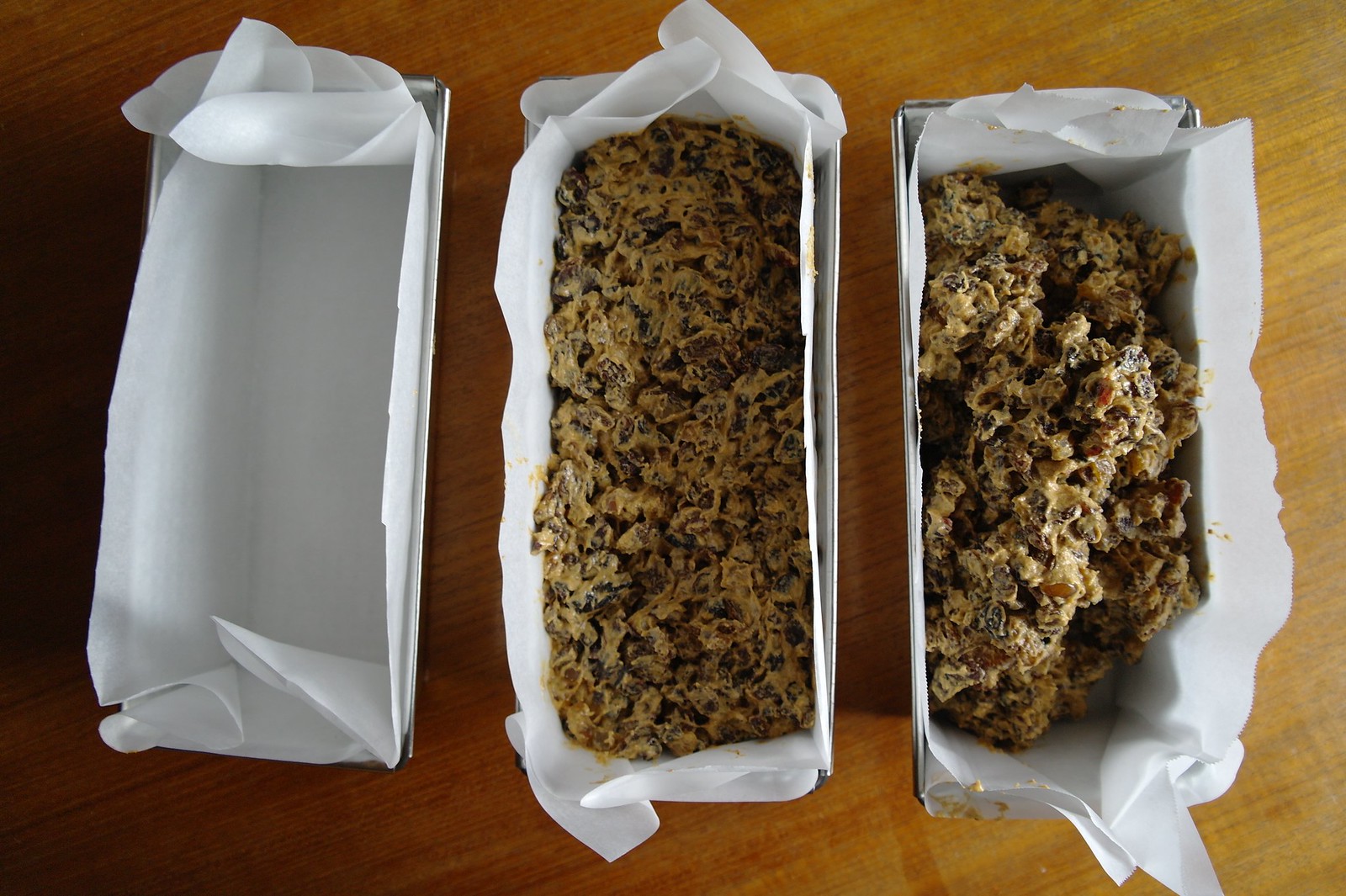 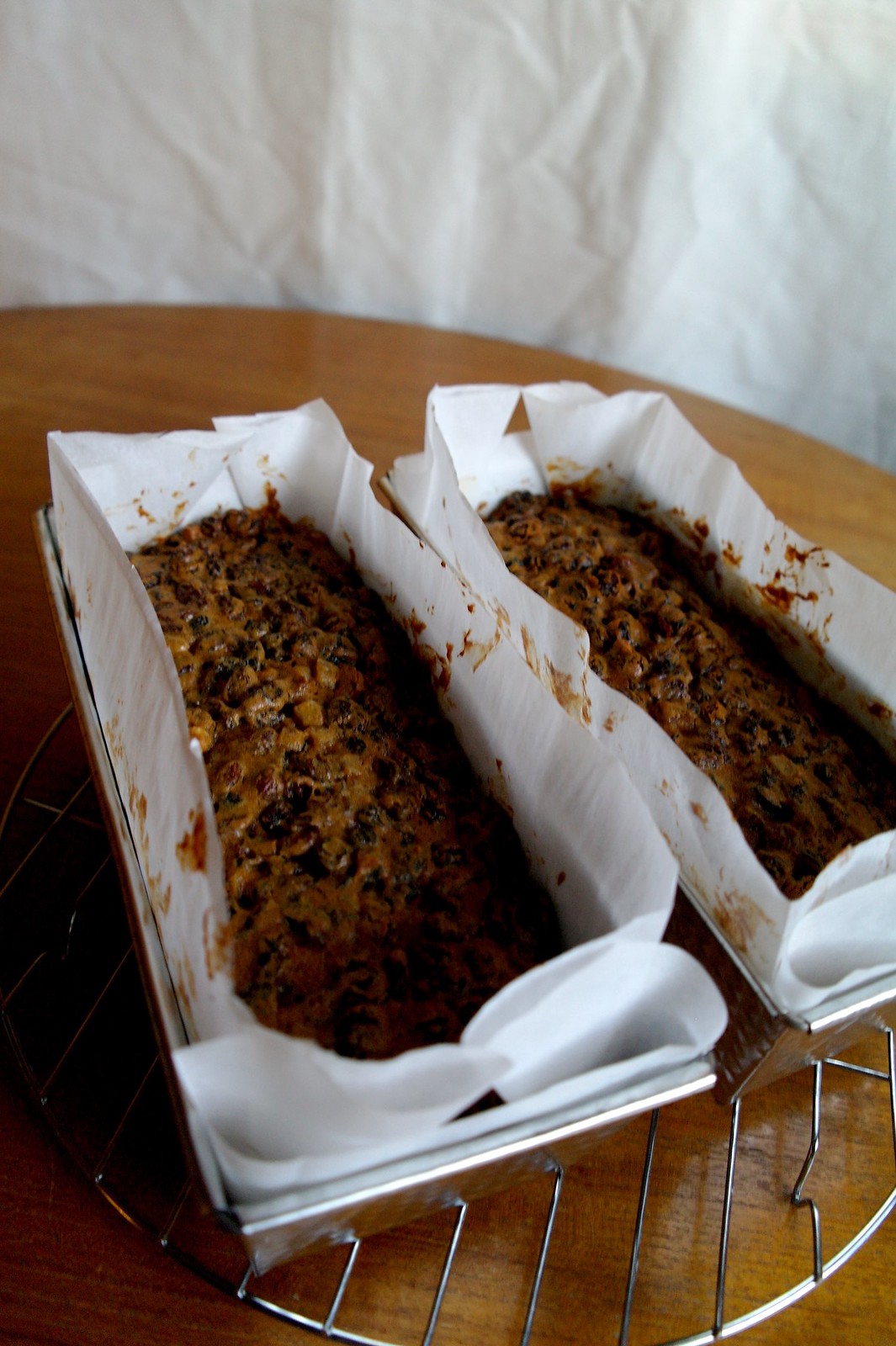 Fruitcake is a bit of a project, for the most part simply due to the mass of ingredients–a dozen eggs, a pound of butter and four kilograms of dried fruit. It’s a process best done with at least two people.

Since we never got around to making the fruitcake until quite a bit later in the year than usual, the current batch is still not ready to try. So while I can’t comment on this years fruitcake, I’ve compensated with the annual tasting of previous fruitcakes. We don’t use nuts to prolong the lifespan of the fruitcakes (nuts are prone to go rancid after a couple years). After that, it’s a matter of storage–in a cool place, perhaps refrigerated if you can, and the occasional hydration with spoonfuls of rum to keep them from drying out too much. We wrap them in paper, then some plastic and double bagged in snitched bakery bags. 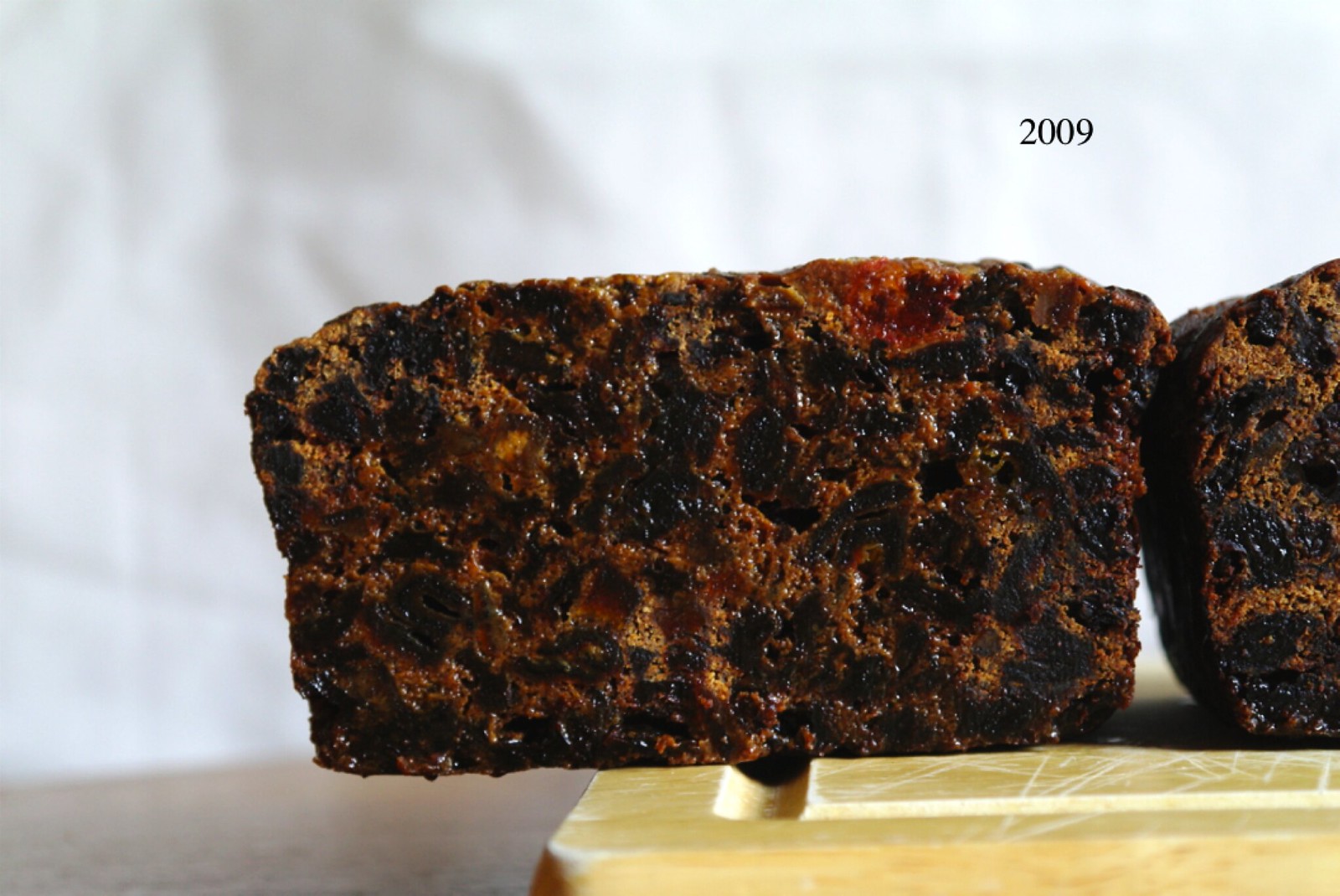 2009 is the oldest that we still have. It’s held up well, but it is definitely a little bit dry (it was also the last year we used maraschino cherries). 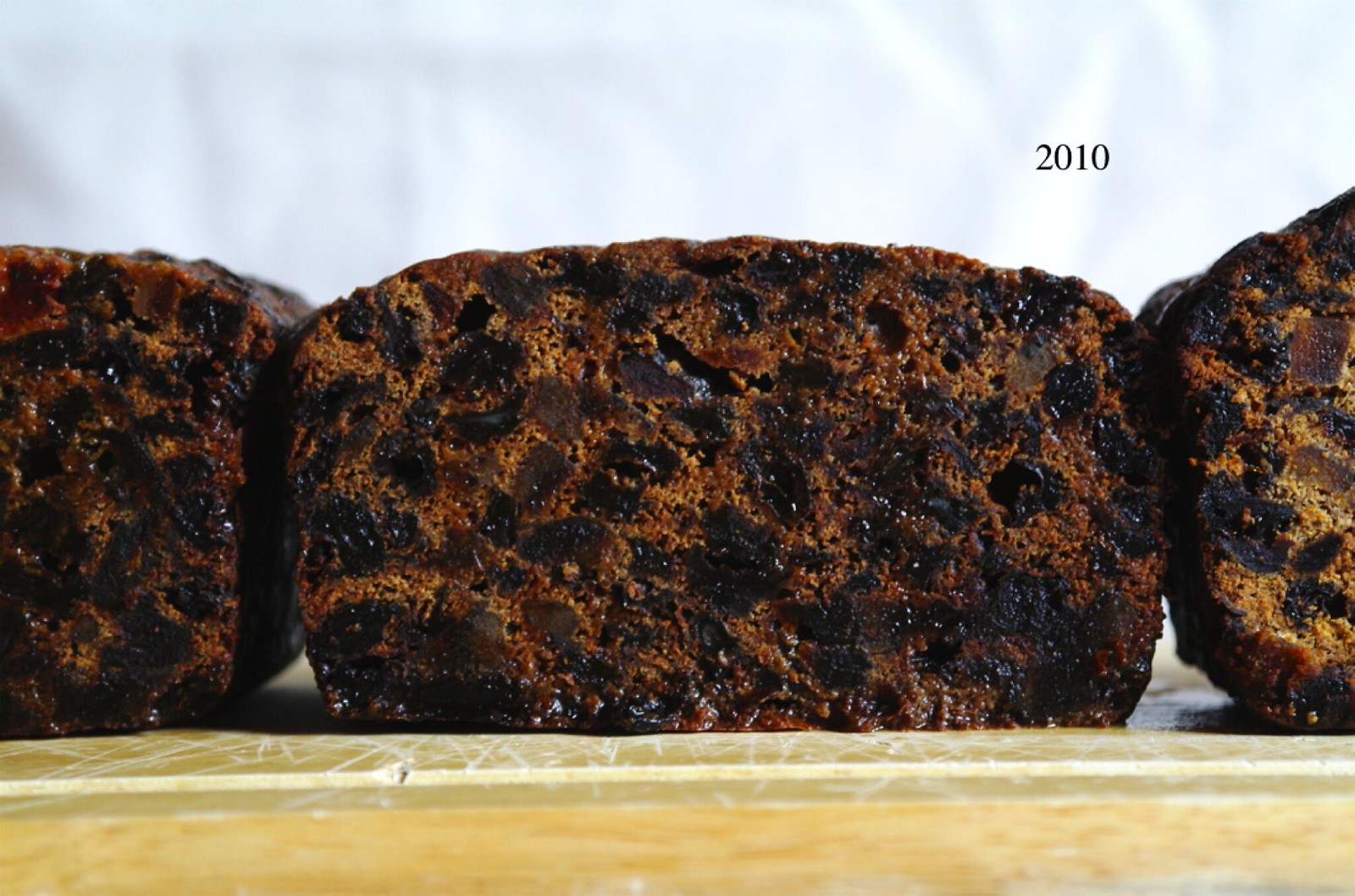 2010 was a very, very strange year. Drier than even 2009 and with occasional hits of very hard and intense candied ginger. 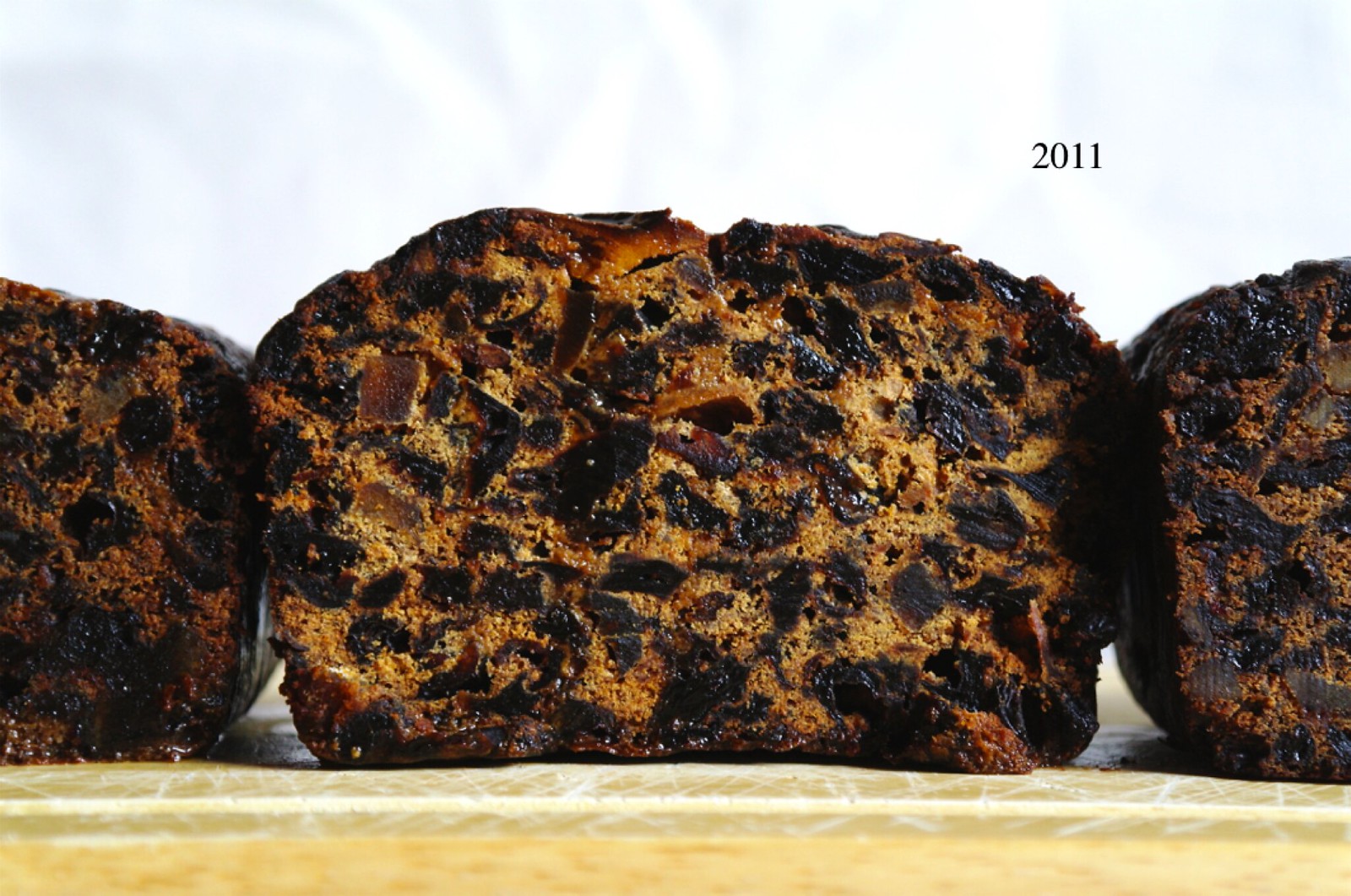 2011 was a curious experiment; we used an “orchard medley” of dried fruits: spongy dried apples and pears that formed tough and chewy disks scattered throughout the cake. The cake itself looks quite a bit lighter in colour as a result, and has never seemed as rich and well-saturated as the rest. 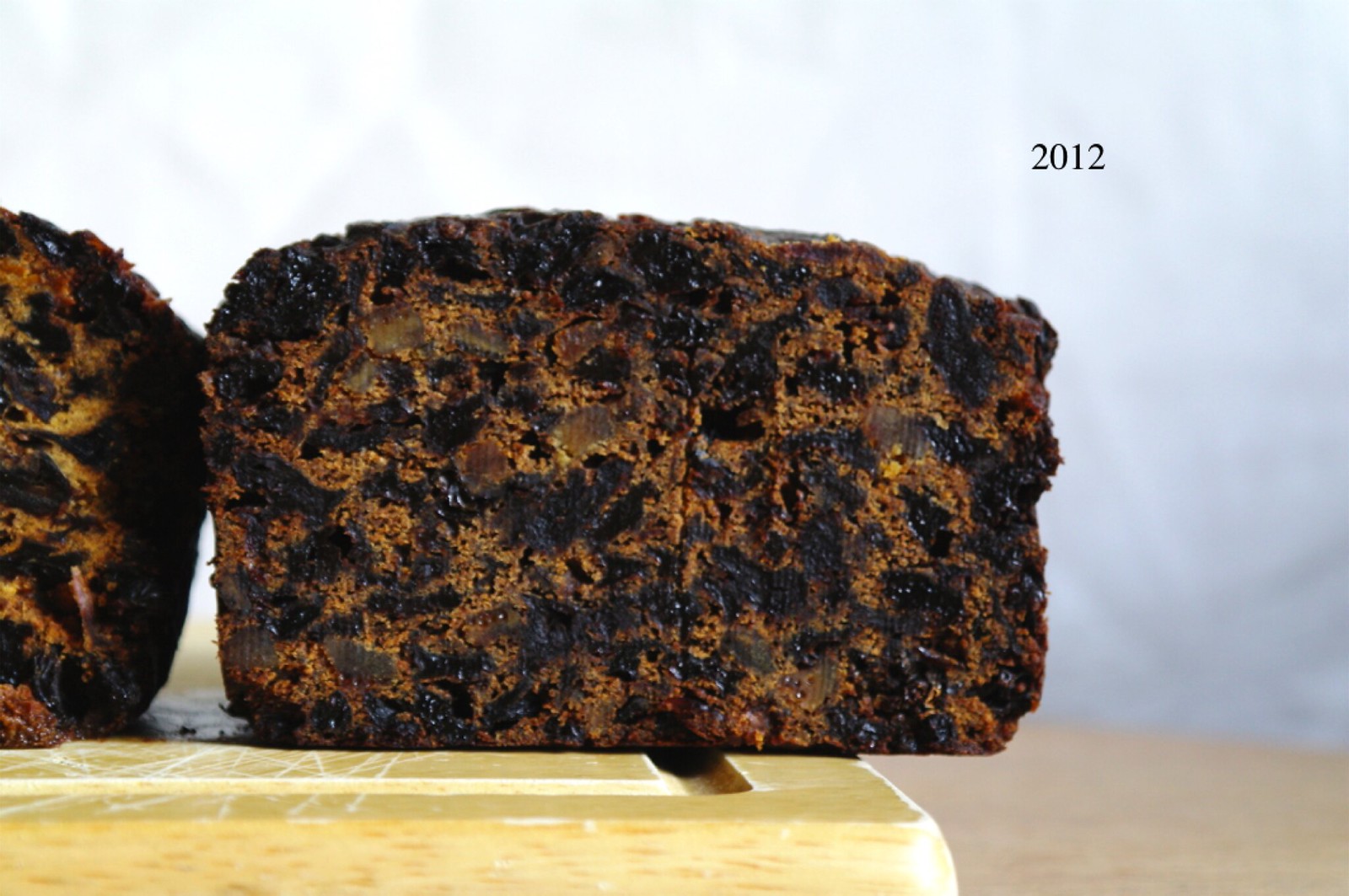 2012 is just about everything you could want a fruitcake to be. Dark and moist and compacted into a dense receptacle for boozy dried fruits. It may be a slightly strange simile, but I’d compare it to a brownie or fudge–it has the same decadent heft. 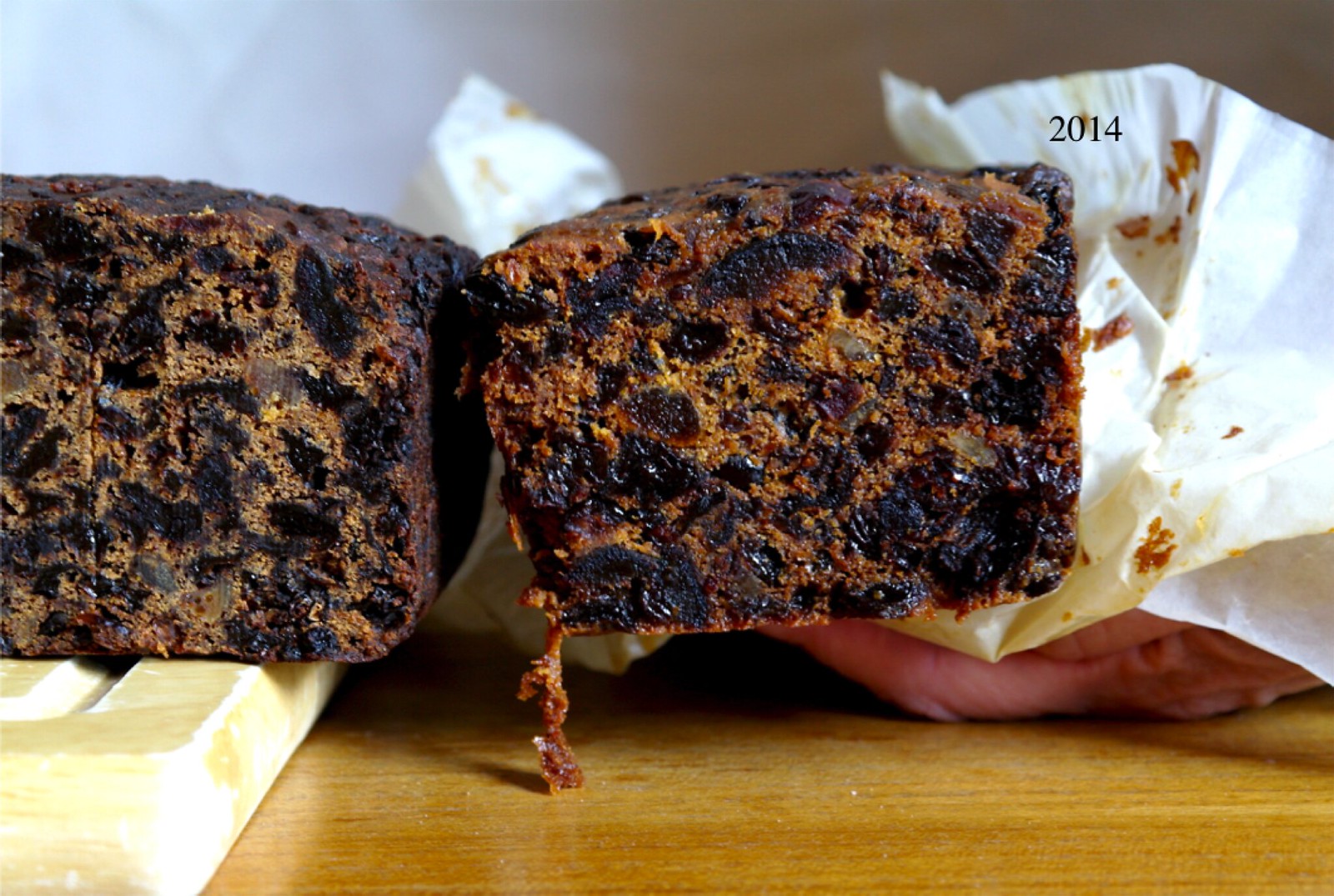 When you compare the taste of a 2014 fruitcake to a 2012, my dad put it quite well: you can taste the individuals fruits in 2014 (a cake of fruits, we might call it), but in 2012 it just tastes like a fruitcake. It’s quite a transformation that takes place–it becomes much more than a cake, or not exactly a cake at all anymore, in any recognizable sense of the term. While we don’t have any 2013 for comparison, I’d suggest a three year aging period seems quite agreeable, and one year still a bit on the younger side. 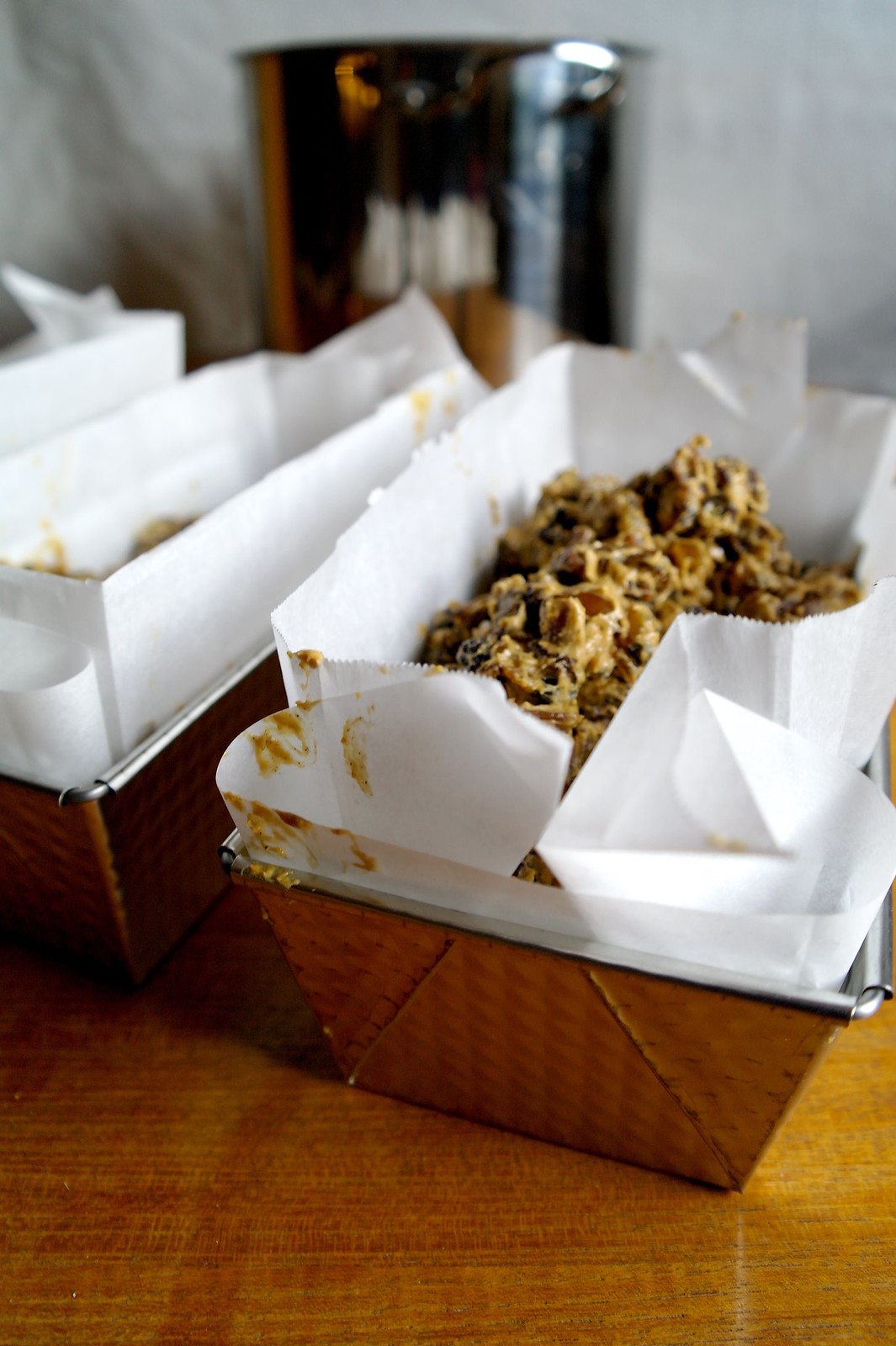 Fruitcakes make good gifts, especially when you end up with 6 kg worth every year. It generally goes over best when you give away the current vintage (though apparently aged fruitcakes go for quite a bit).

I’m sharing this fruitcake at Natascha’s fruitcake challenge! It’s fascinating to see the varieties that have collected as part of the challenge, spanning the spectrum from light cake-y fruitcakes to aged and rum-soaked dark fruitcakes.

So far I can’t say how this years fruitcake has turned out – that will be for later years – but hopefully you might be able to take something from the experience of previous years. A bit discouragingly, the moral seems to be something along the lines of don’t experiment! as I ended up regretting not only the crystallized ginger, but also the dried apples and pears… But even without more creative experiments, there’s always some variation every year. The main aim is always to clear out whatever old dried fruit we have in the cupboard, and so the fruitcake has proved to be quite flexible in absorbing whatever we throw at it. We’ve gradually cut back from the currants and dates to make room for dried prunes and cherries, and this year I also increased the amount of spices. (And we’re also looking at modifying the procedural details of the fruitcake, such as changing what stage the egg whites are incorporated.)

Besides, the experiments and the failures and all the variability from one batch to the next is what endows each generation of fruitcake with unique character. The fruitcake can act a snapshot (an aging and changing snapshot) of what transpired the last fruitcake session. Without these experiments the fruitcake tasting wouldn’t be quite as fun or bring up as many memories. 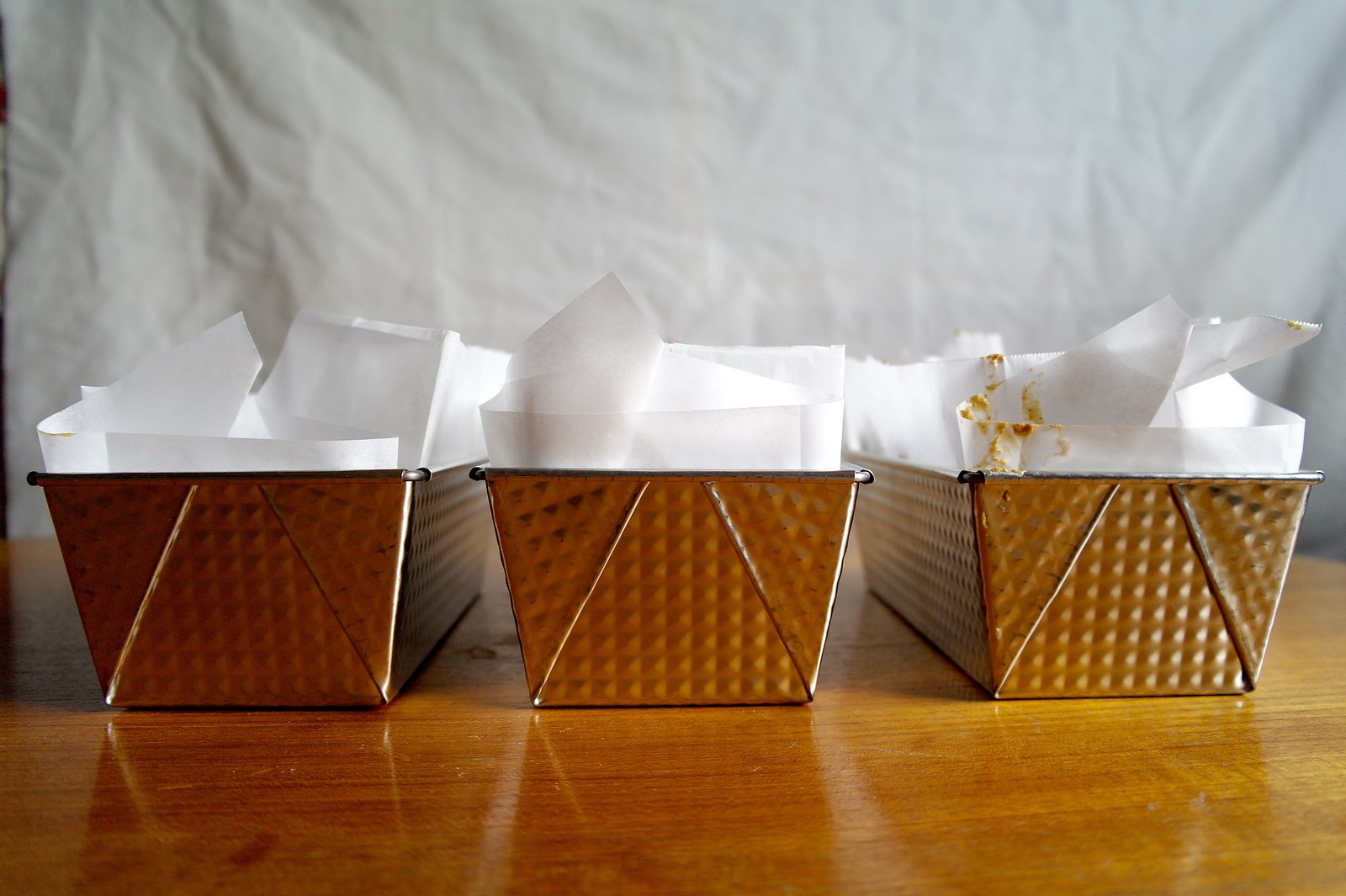 In a large pot, combine the fruit.

Whisk together all the dry ingredients for the cake. Add one cup to the fruit and mix until all the fruit is coated. Set aside.

Combine the brandy and coffee and set aside.

Cream the butter with the sugar and vanilla in a very large bowl until light. Slowly add the egg yolk mixture, beating constantly.

Bake 275 F for 2 hours or until an inserted skewer is removed clean. Let cool on a wire rack.

Douse each cake with 1-2 capfuls of rum or brandy. Wrap in paper, then plastic. Store in a cool place, hydrating every week or so, and it will be ready to eat in a couple months.

For long term storage, wrap the cake in several layers and seal it well in a bag. Keep in a cool place. Hydrate a few times in the weeks before you intend to eat some; otherwise it will keep quite nicely.