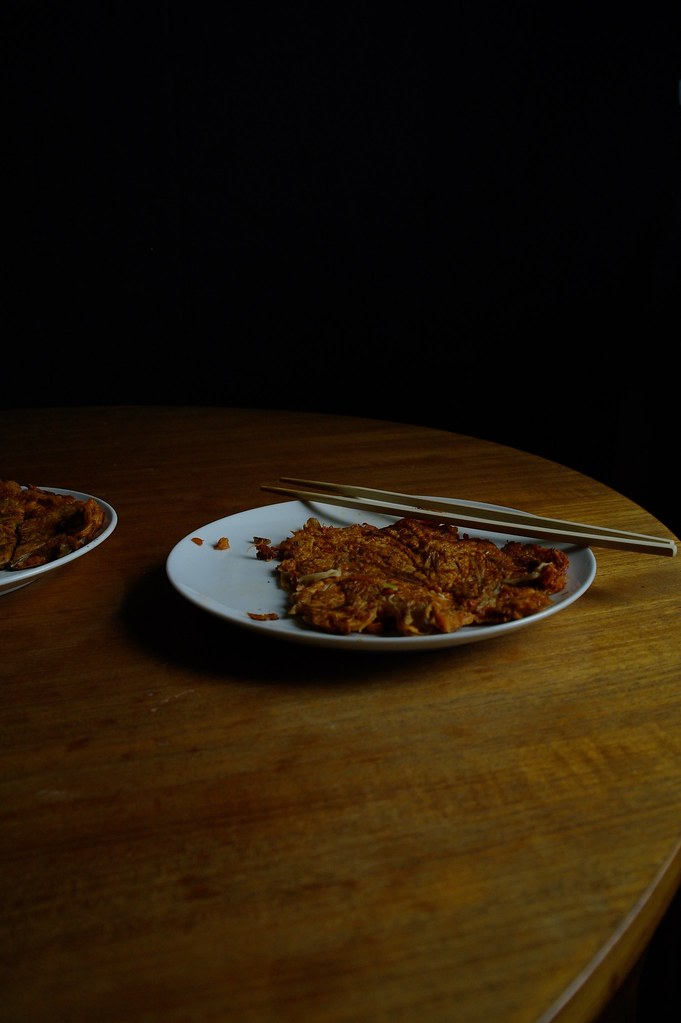 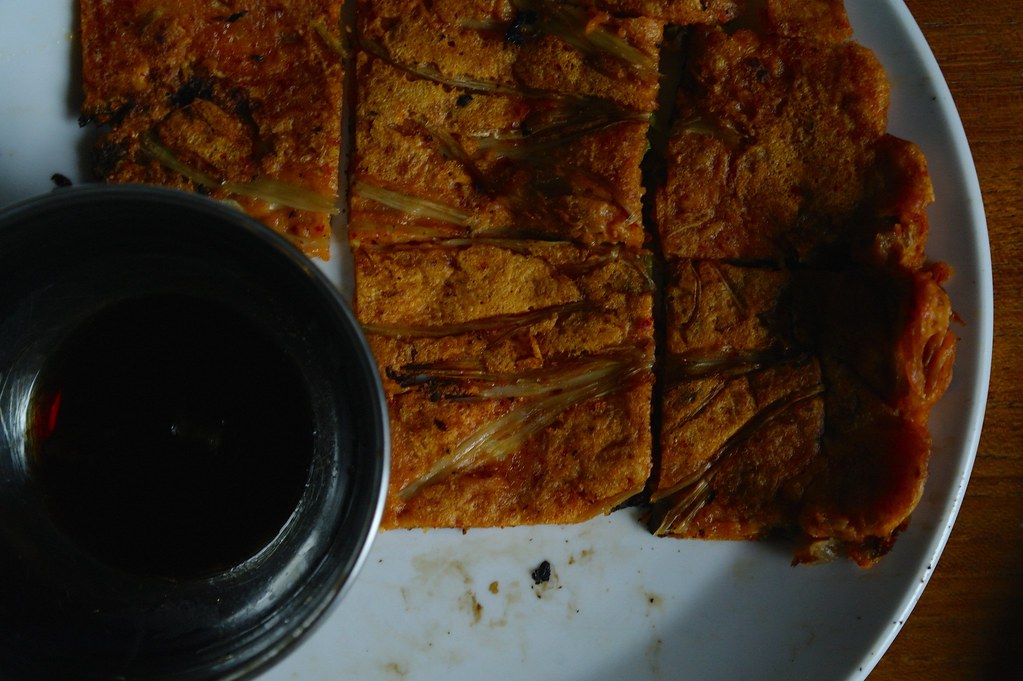 It’s been very foggy lately in the mornings (enough to make your photos dark even in the middle of the day). It’s the sort of gentle fog that accumulates into a milky horizon obscuring everything across the river–you look across, see only a line of trees, and completely forget that you’re in the city. The bridges stretch over to nothing. I love it, it feels deliciously mysterious and novel-like.

While I seem to always partake in it, who really is a fan of weather small-talk when it focuses around the forecast? The highs and lows, the oh-it-will-be-sooo-much-nicer-on-Wednesday (whether or not it actually is nicer) and a strange fixation on that falsity that is the wind chill. I think it is understandable that we focus so much on the weather, but the qualitative aspects are so much more exciting. It is beautiful or it is horrendous or it is both, and it is always affecting our daily lives. Sometimes we have to plan around it, sometimes we need to just march through it, and sometimes we celebrate it. More than that, it’s incredible how one day to the next and then one month to another, everything in the surroundings can change. 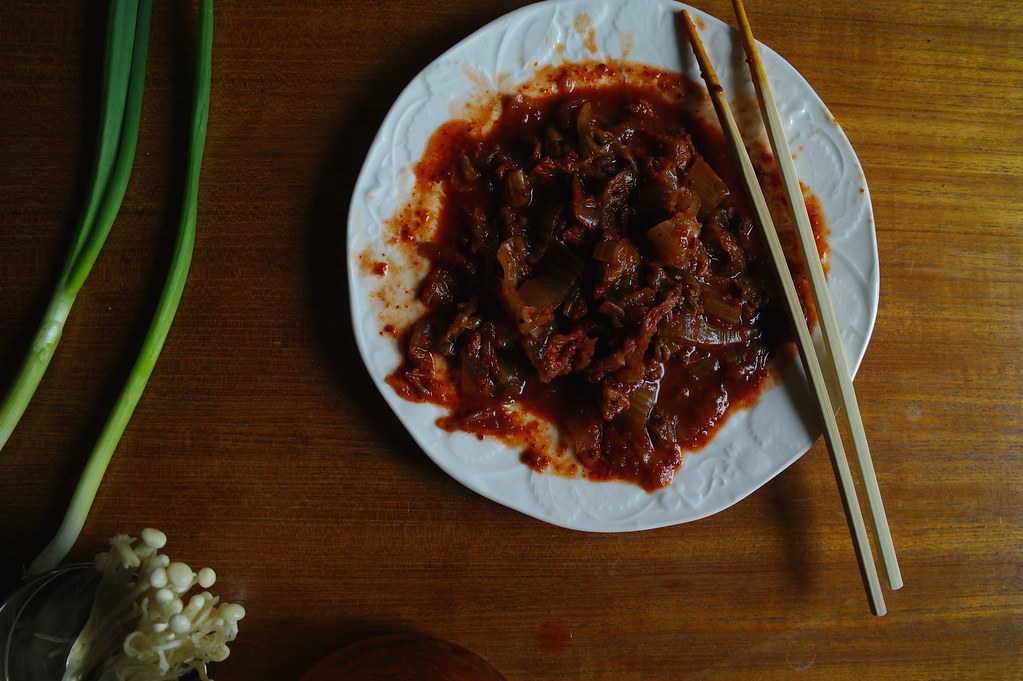 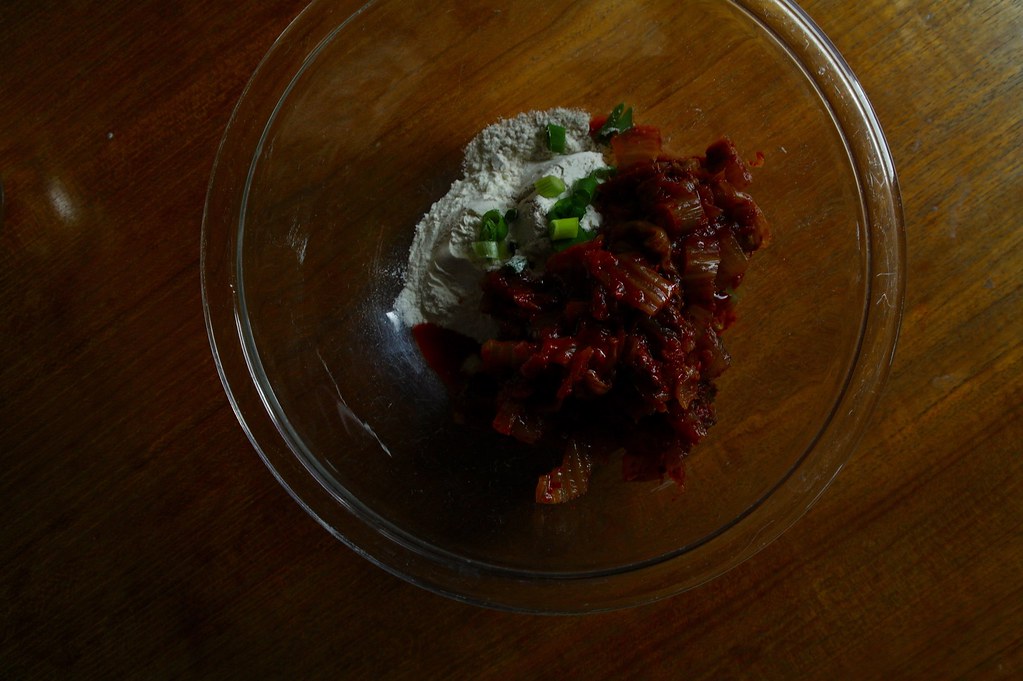 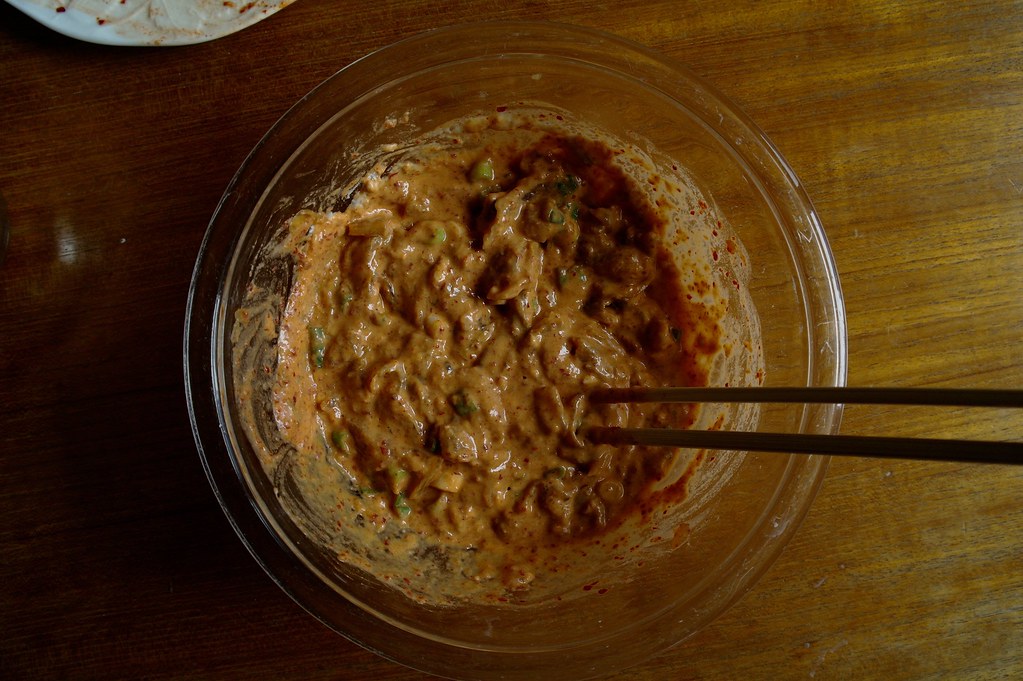 I understand the fog isn’t too good for those driving on the highways. But for short-sighted people like me, having fog obscure everything two blocks ahead isn’t too bad–it feels less like a fault of being imperceptive and more like an adventure.

Speaking of less figurative adventures, the kimchijeon. Okay, so making pancakes doesn’t exactly qualify as the best adventure, but I needed a nice segue to the topic. 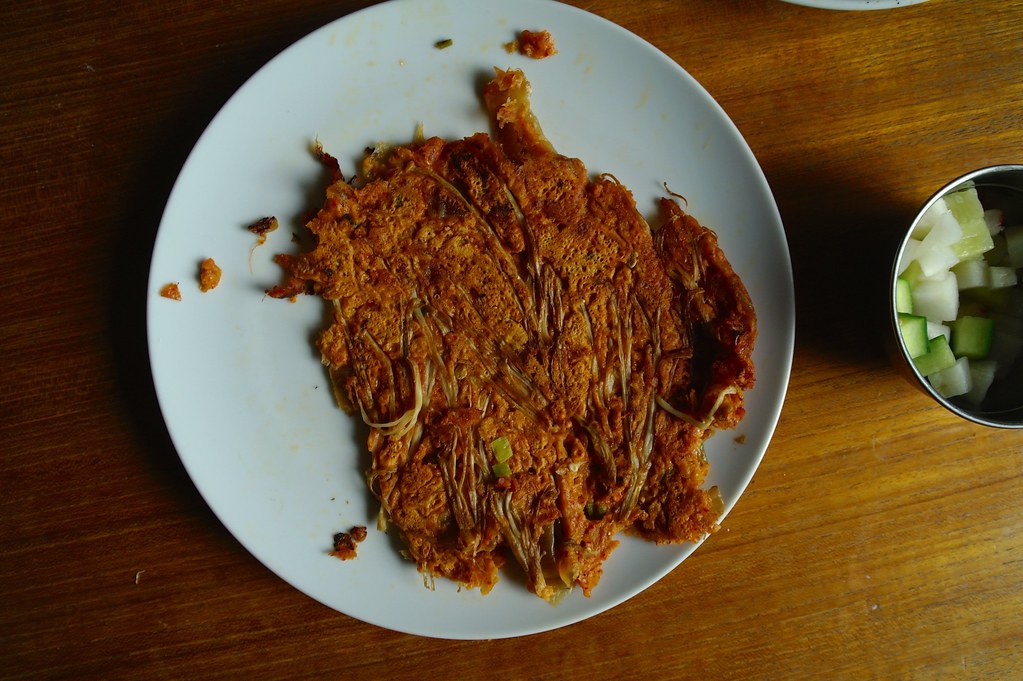 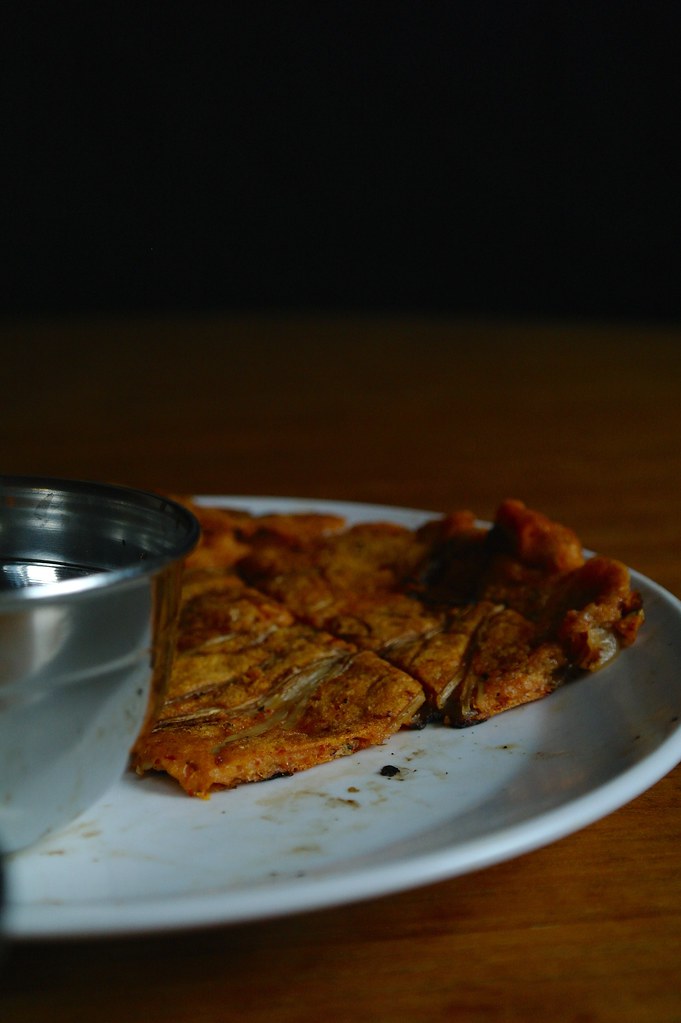 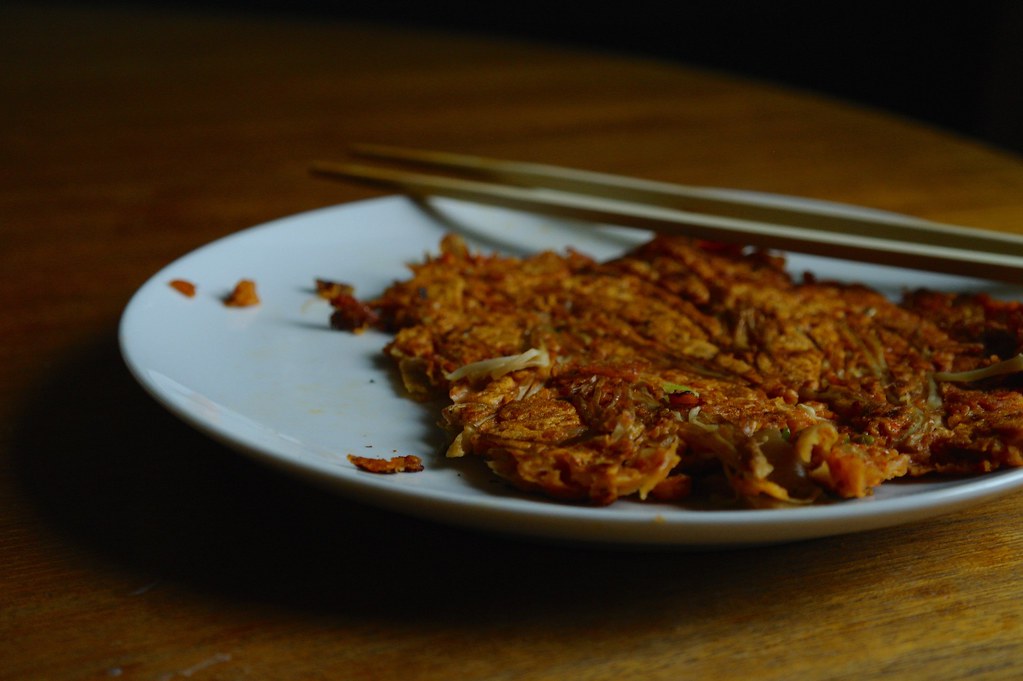 As I read from mykoreaneats, this is an example of anju, food for eating with alcohol (yes, now that is some good motivation to make it). Otherwise, it’s also fabulous for using up overfermented kimchi. I’m not well versed in kimchi, but I have noticed the colour changing a bit (we don’t go through it very quickly, so it’s been around for a while), so I appreciate this aspect as well.

I was convinced that the enoki would look pretty on the bottom of the pancake, as a sort of tree or leafy pattern. How I was wrong. Instead it came out looking like a veiny mass (I think it has to do with the red colour of the pancakes)–but quickly forget that horrible description. Lay out the enoki in straight parallel clumps on the pan instead and it will look nice. Possibly. 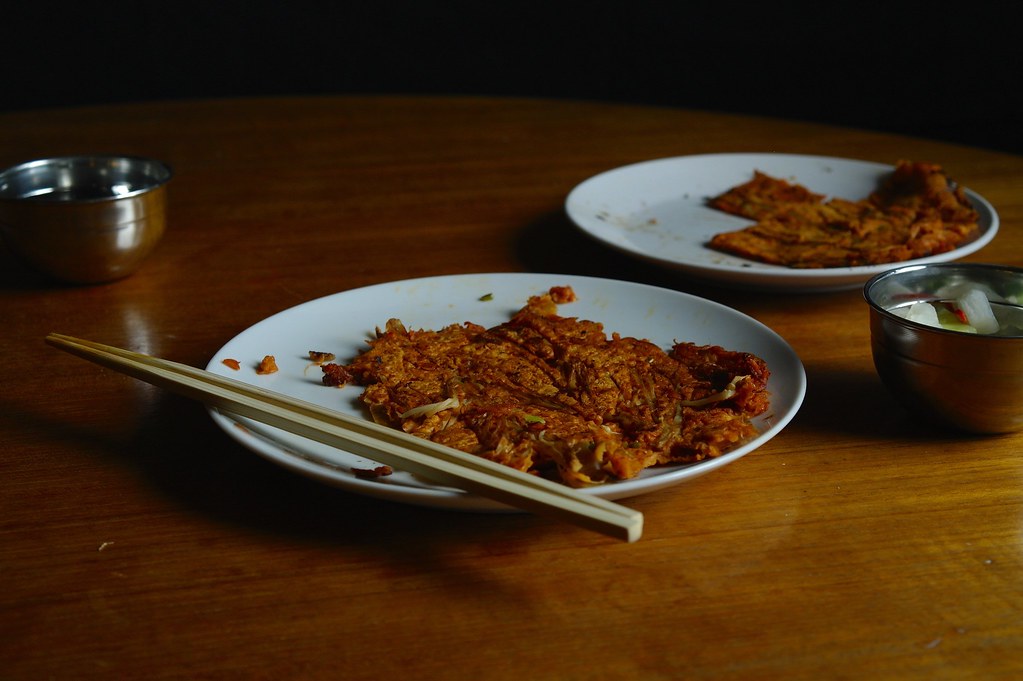 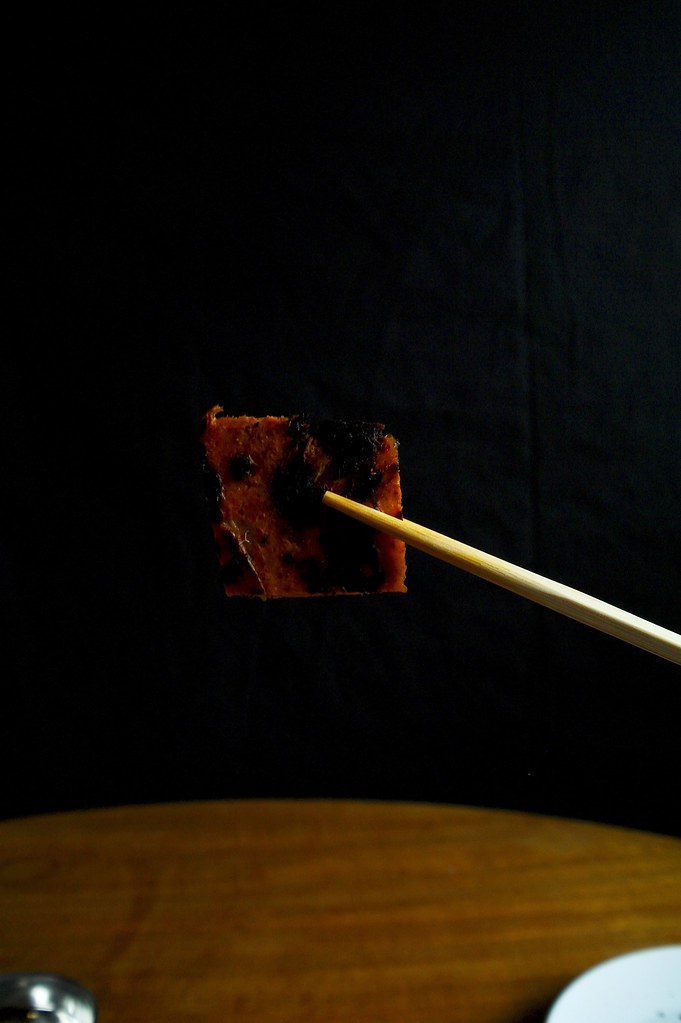 The flavour is strong and spicy. They are best when crispy (and maybe even a bit charred) and then they become that triumvirate of spiciness + saltiness + crunchiness. Cook them until quite crisp, cut into pieces or pull it apart instead. We ate it with some soya for additional saltiness and some pickled vegetables on the side.

What I’ve written for the recipe is a bit vague because the whole thing was made with a generously free hand. The first pancake I cooked had a lower batter to kimchi ratio and came out very delicate. It’s the sort of pancake that is easily to pull small pieces off, which makes it quite fun to eat. I added more flour and water to the second pancake. It was still flavourful enough, but also held together a bit better, and I ended up preferring the texture and consistency of this pancake. The recipe below is roughly akin to pancake #2. 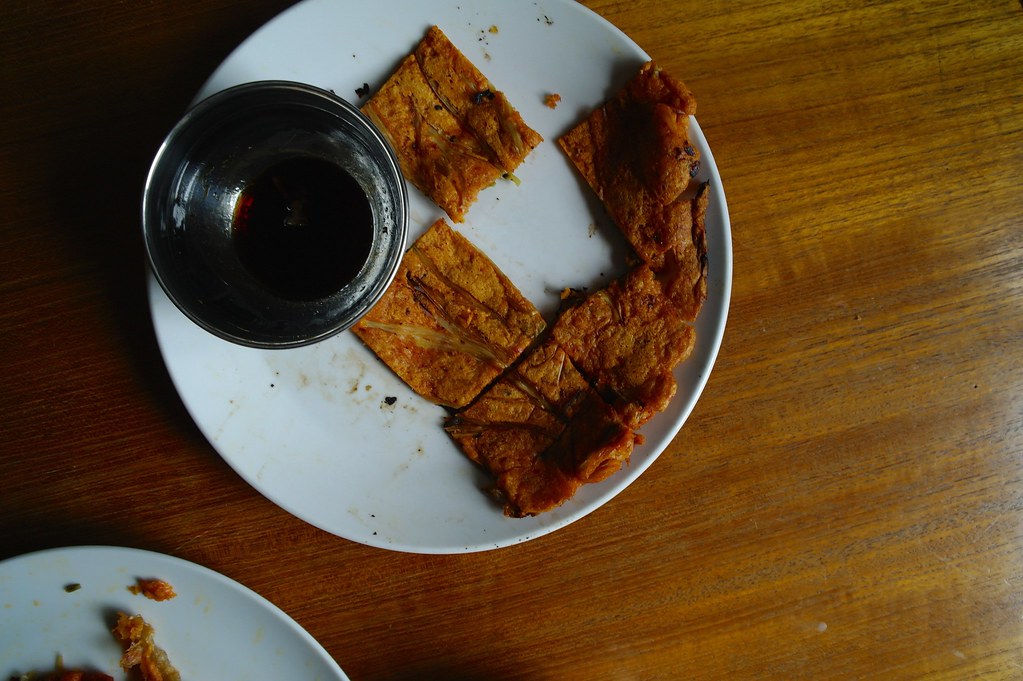 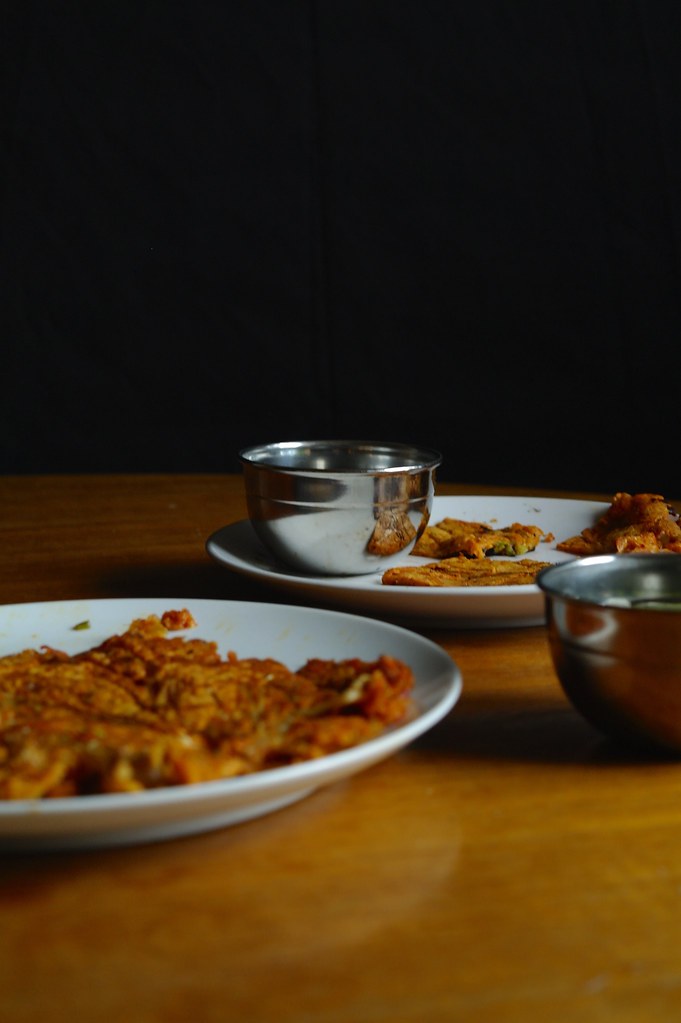 These are being brought to Natascha’s Pancake Challenge. Natascha and Lina put the challenge together along with a list of different pancakes to demonstrate the wealth of cakes that can be cooked in a pan. It’s a broad definition that is, excitingly, able to encompass a wide variety of different foods, the kimchi pancake being just one of them. There are quite a few different types and exciting flavours that I’m excited to see other bloggers bring! 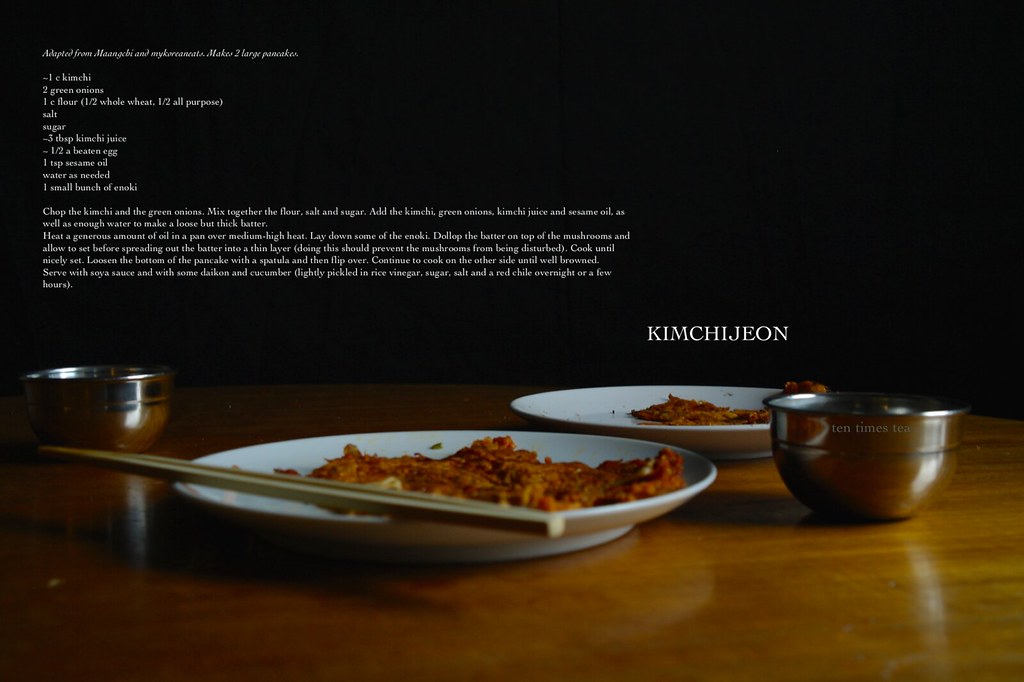 Chop the kimchi and the green onions. Mix together the flour, salt and sugar. Add the kimchi, green onions, kimchi juice and sesame oil, as well as enough water to make a loose but thick batter.

Heat a generous amount of oil in a pan over medium-high heat. Lay down some of the enoki. Dollop the batter on top of the mushrooms and allow to set before spreading out the batter into a thin layer (doing this should prevent the mushrooms from being disturbed). Cook until nicely set. Loosen the bottom of the pancake with a spatula and then flip over. Continue to cook on the other side until well browned.

Serve with soya sauce and with some daikon and cucumber (lightly pickled in rice vinegar, sugar, salt and a red chile overnight or a few hours). 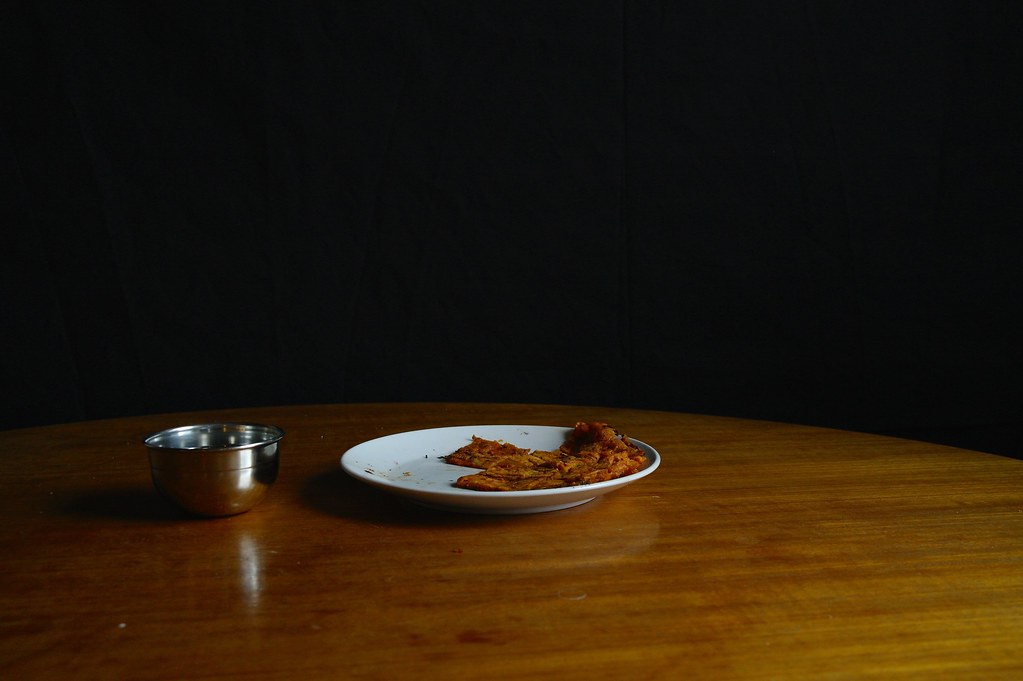