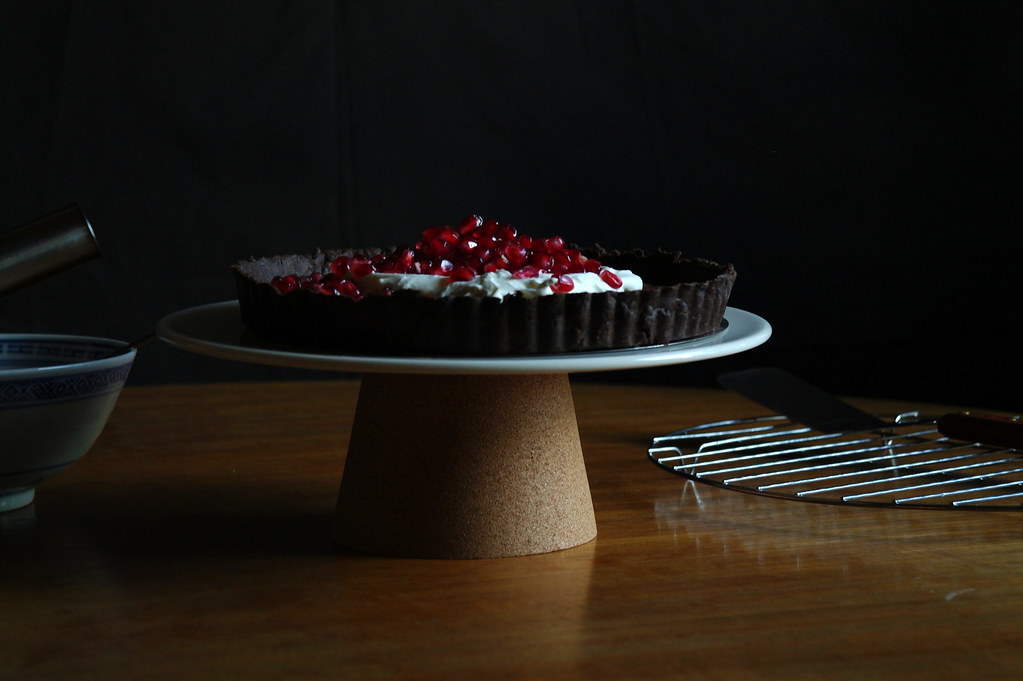 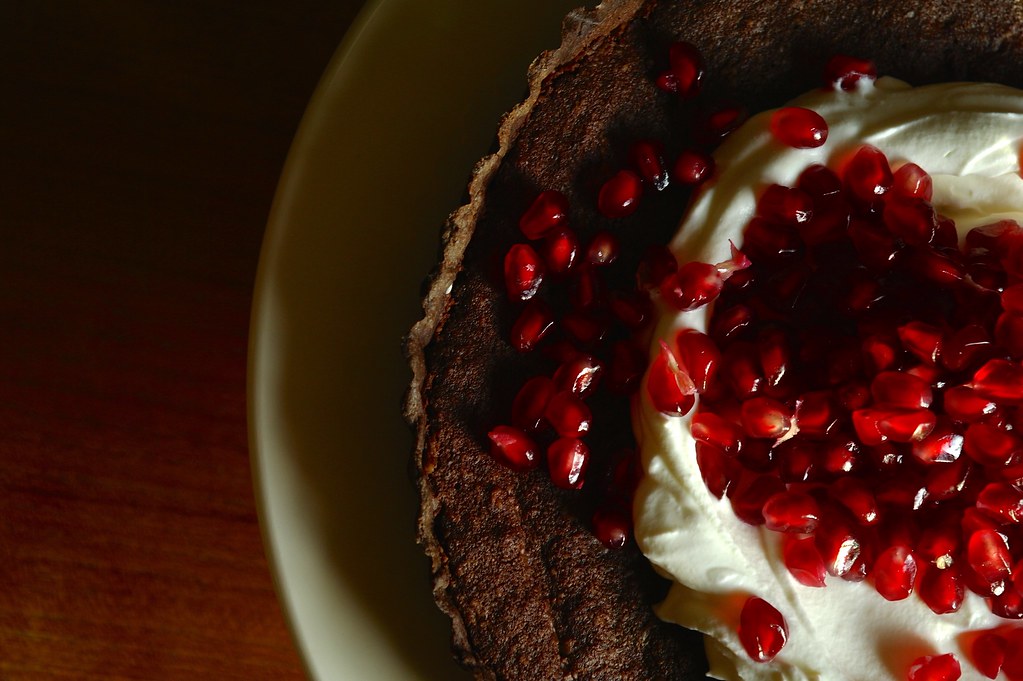 Lately it’s been buckwheat (and well, pictures taken a bit too late in the evening). There have been these pancakes, this other tart and plenty more in the drafts. What I really love about buckwheat is how much you can taste it. It’s so satisfying to choose a certain flour because you want to taste said flour, and then actually be able to taste it.

My introduction to the taste of buckwheat was rather ambiguous. My sister made these cookies. They tasted so very very good but I couldn’t tell where the bitterness and earthyness of chocolate ended and the buckwheat began.

That might be the point–the flavours go together just so well that one can seamlessly slip into the other.

I still really wanted to be able to taste the buckwheat. I’m not the most perceptive and sensitive when it comes to taste, but I also want to blame a bit of it on the particular batch of flour–at the time I had some one year-old buckwheat flour from Bulk Barn. I’ve been using Bob’s Red Mill flour lately, and it is surprisingly different. Even the colour of the flour is darker, and once moistened, the it becomes hearty and deep grey compared to the slightly more pallid bulk flour. I think the taste comes out a bit more as well (though without a side-by-side I can’t say).

Edit: The difference likely stems from different types of buckwheat –  “dark buckwheat” most likely explains the difference I saw between the two flours, not the source.

Anyhow, I tried the chocolate-buckwheat combination again in the crust, and this time the buckwheat taste is quite a bit more apparent (though somewhat lost with the walnuts and the pomegranates). 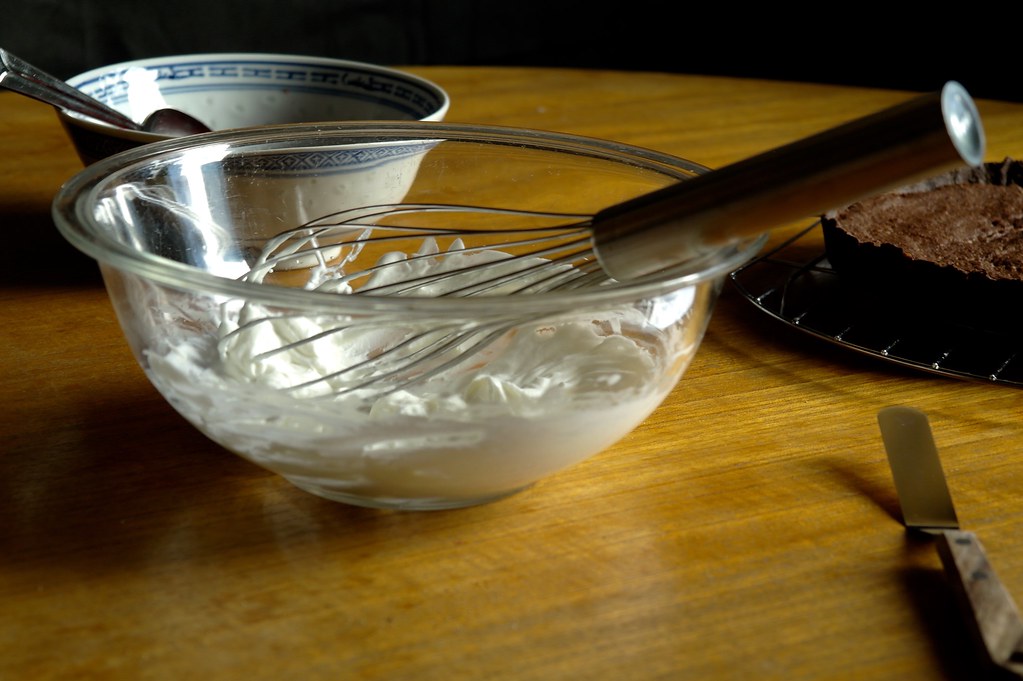 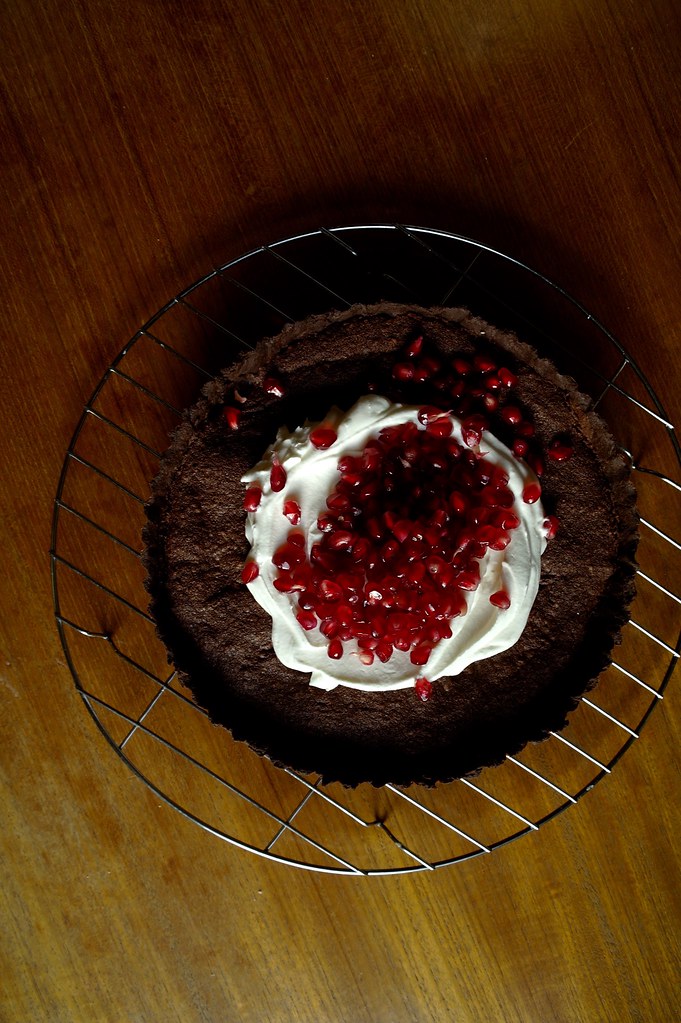 It turns out whipped cream and fruit is, as always, an infallible combination. Be generous with the pomegranate as it’s the only source of acidity and brightness against an otherwise rich dessert.

The tart is nice fresh, although I’m particularly fond of it after it’s been chilled in the fridge. The fragipane-like chocolate walnut cream takes on a bit of a fudge-y, brownie-y, ganache (I couldn’t quite make up my mind) type texture. However, the tart crust does loose some of its crumbly crispness.

I overbaked the tart a bit, and so the walnut cream came out a bit dry. To retain as much not-quite-but-almost-squidgyness as possible, it should be only baked until just cooked through and set. Luckily, after a day in the fridge the walnut cream was quite revived (moisture from the whipped cream? it suffered a bit from the time in the fridge).

So while buckwheat didn’t make it to the recipe title flavours, it did get a whole post dedicated to it…! 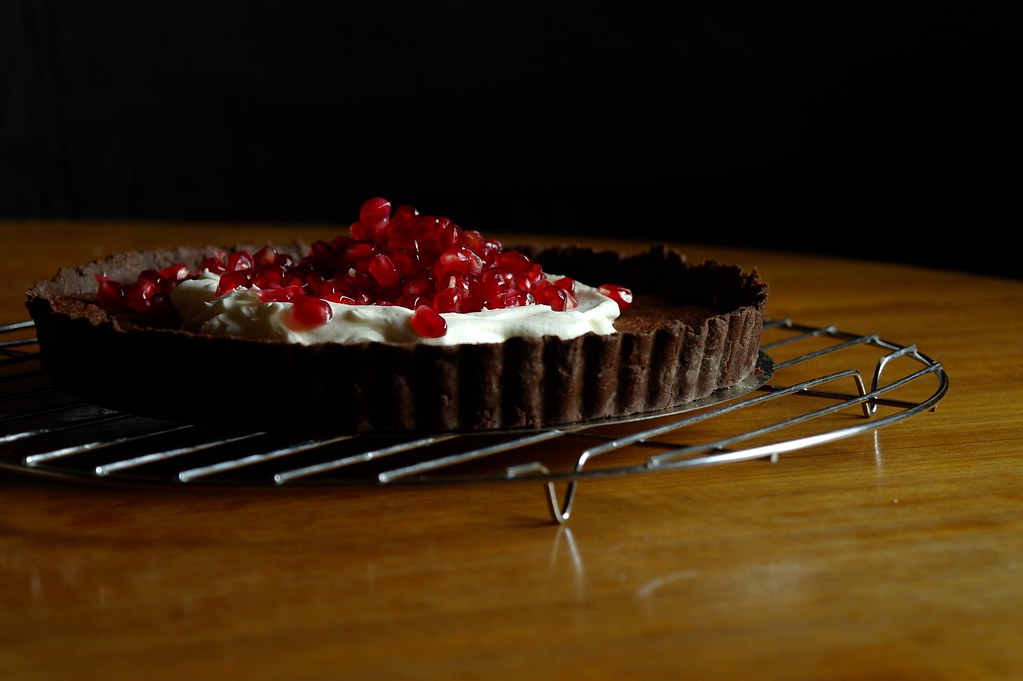 Cream butter, sugar, and salt. Mix in the flours and cocoa powder. Finally squish in the egg until it forms a cohesive and well-mixed dough. Wrap in plastic and chill.

The dough is very delicate and not very strong, so I think the best way to handle it is to roll it out on a surface until fairly thin, and then using a metal bench scraper to help you transfer over the pastry, line the tart pan piece by piece, pressing the pieces together to seal. It’s more the consistency of the sort of crust you press into the pan, so you could also try doing that if you prefer, using the bottom of a glass to pack down the crust.

Adapted from the almond cream in Richard Bertinet’s Pastry.

1/2 capful or so of Sambucca, if desired

Toast walnuts in a pan until fragrant. Let cool a bit before grinding in a food processor. The grind doesn’t have to be that fine, but there shouldn’t be any chunks of walnut.

Cream butter, sugar, salt with a wooden spoon until light. Mix in the egg a bit at a time. Beat in the walnuts.

Melt the chocolate over a double boiler. Pour into the mixture and stir until combined. Mix in the flour and cocoa powder, and, lastly, beat in the vanilla and some sambucca if you like.

Let it chill for around 15 minutes to slightly firm up, but not become hard. This can be done while the tart crust is baking.

Scrape into the baked tart crust and continue baking at 375F for another 20 minutes (perhaps less than that would be better) until it forms a nice crust on the top.

Whip the cream until it reaches soft peaks. Pile onto the tart, and then top with the seeds of half a pomegranate.