My cousin is visiting, and perhaps the one thing you have to do here is go for a walk through the park. The pathways are as crowded as they ever get in the summer, especially in the early evening, with small groups that move steadily along in a twisting circuit around the park. There are teenagers, young adults, middle-aged families. Most of them carry their phone in one hand, some with a wire looped under their arm, presumably attached to an extra backpack-tucked battery. Occasionally someone might step off the path and onto the grass, disturbing the already plenty-ruffled geese to flick at their phone screen.

The Cousin was amazed. “You don’t see this where I live,” she said as we dutifully caught our respective pidgeys. “Never so many people playing at once.”

It’s something to do with such a close bundle of pokéstops in my city’s main easily accessible public public, close but separated from busy streets. Lit up with lure modules all day long, it makes for a massive and centralized congregation of Pokémon hunters.

It’s fun, but a bit overwhelming.

A summer volunteer project recently finished up, and as we all departed one of my fellow volunteers wished me not a wonderful remaining summer, but happy Pokémon hunting. It seemed to be my dominant characteristic in the group (perhaps the fact that I was comparing Pokémon stats with some of the eight-year olds we worked with contributed to that).

I’m feeling the need to justify myself right now, so a question: Why do I play Pokémon Go?

An inconvenient game might be the best sort of game. It makes it tough for Pokémon Go to become that addictive, as you actually have to go outside and walk. I can’t stay home and play it all day (unless I were to live within range of a Pokéstop, perhaps). Instead, I need to go out, and Pokemon Go directs one towards local landmarks and public art, but whether or not the game really encourages visitors to appreciate said locations is debatable.

I watched Pokémon growing up too, though admittedly, only when I couldn’t watch Digimon.

(For those who claim that Digimon is a Pokémon rip off: perhaps, but some fundamental differences set it apart…

I seem to be meeting more people that play Pokémon Go or are at least ambivalent towards it than I’ve met people that distinctly dislike it. Still, there are, undeniably, some downsides to the game. It can also become very distracting and lead to potentially unsafe behaviours. While focusing on a small mobile device for any reason is distracting, the dangerous difference is that Pokémon Go in particular leads to these behaviours when you are out and about and actively travelling.

There are also some incredibly inappropriate Pokéstops (see this or this or this). Now, retrospectively, these issues are being rectified, but this is instead of avoiding these problems in the first place.

The park has fairly innocuous Pokéstops though. They’re mainly art and bridges, and even a swing set, so they’ll continue bringing in the players, the cyclists and joggers will continue being smothered until they shift to the quieter (Pokéstop-free) pathways, and the pidgeys will keep on coming.

What are your thoughts on Pokémon Go? Has it changed the activity of communities and parks where you live?

They varied even more than I realised. In the tables below, values are in grams and ratios are unitless (except for the egg whites which are counted instead, and the ratio expressed in a horrible unit of egg whites per 100 grams of butter). (edit: egg whites now expressed as a m/m ratio to be more consistent and more importantly, coherent).

I ended up deciding to do something like this:

But then changed things around once more while putting the friands together.

Eventually, with enough egg whites and butter and almonds, it would be interesting to try out a few different ratios and see what the results are.

The ratios aside, looking up friands was incredible fun. It seems every recipe has a different flavour: macadamia and coconut and lime, rhubarb and vanilla, spiced, mango and pistachio, fig and walnut and spice, hazelnut and chocolate… It’s such a simple cake and very quick to bring together, which makes it amenable to experimentation.

It is quite the financier: the chewiness, the crisp crust, the buttery and tight crumb. But the connotations of friand gives it so much more freedom to be whatever you like (though it hasn’t stopped me with financiers…like this or this).

For once I used only all purpose flour (it was by accident!), and so the financiers turned out a bit anemic looking…and a bit bland. While I’m disappointed it also made me quite happy: this gives me good reason to keep on making everything whole wheat or part spelt flour.

These friands were quite an exercise in forgetting things: not only the whole wheat flour, but the crème de prunelle (similar to amaretto) was completely forgotten until only the last bit of batter was left. The swirl of rosehip jam was iffy–it too often landed up on the side of the friand instead of being swirled through, and didn’t particularly contribute either.

So in the end these friands were simple and plain, just a vehicle for big oven-softened black cherries. 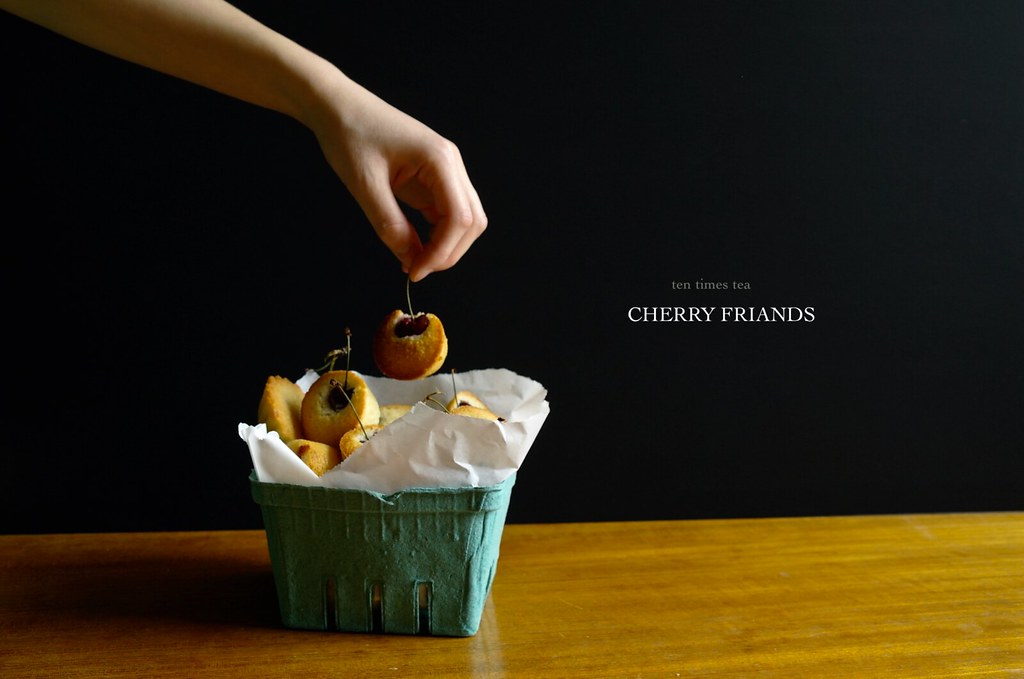 Melt the butter and set aside to cool.

Whisk the eggs until they are a bubbly froth, but not holding peaks. Sift in the flour and icing sugar, and whisk until combined. Stir in the almonds and then the melted and cooled butter. Stir in a few spoonfuls of creme de prunelle.

Put a bit of batter in each mold. Add a bit of rosehip jam, swirl with a knife, and top with some additional batter. Place a cherry on the top of each cake.

Bake for around 20 minutes or until browned and cooked through.