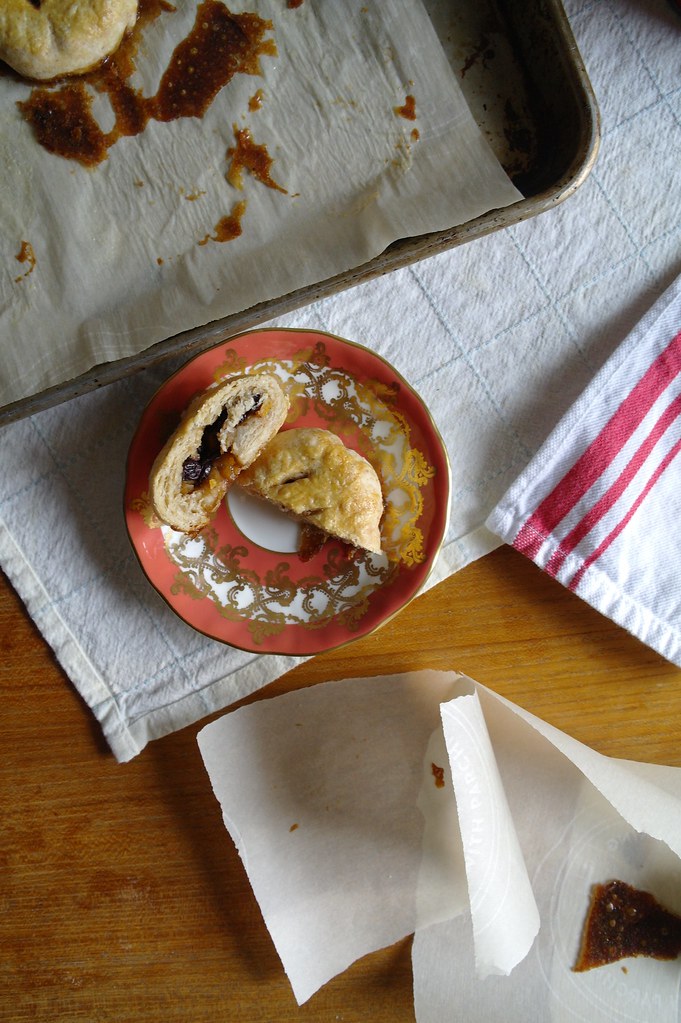 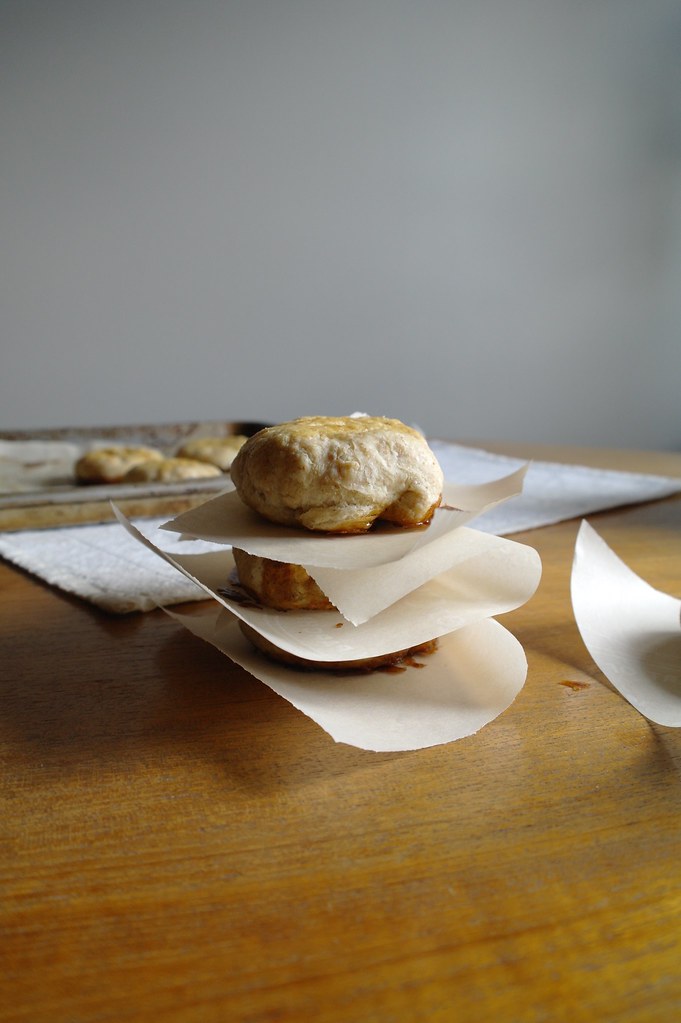 I was so happy when Lina of Lin’s Recipes, and commenced her return to blogging with a recipe challenge. Her previous challenges have been plenty of fun, a chance to learn, and an exciting way to bring other food bloggers together. This challenge is being hosted by Freda of Aromatic Essence!

For this challenge I made Eccles cakes, little pastries stuffed with currants, excitingly something I had wanted to try making for a while. 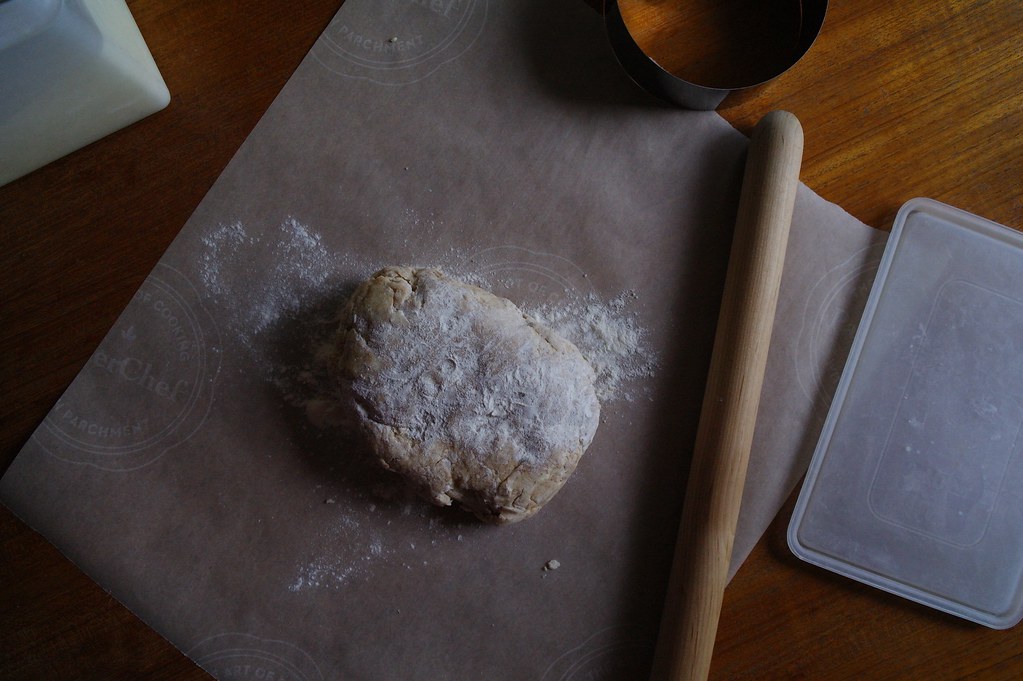 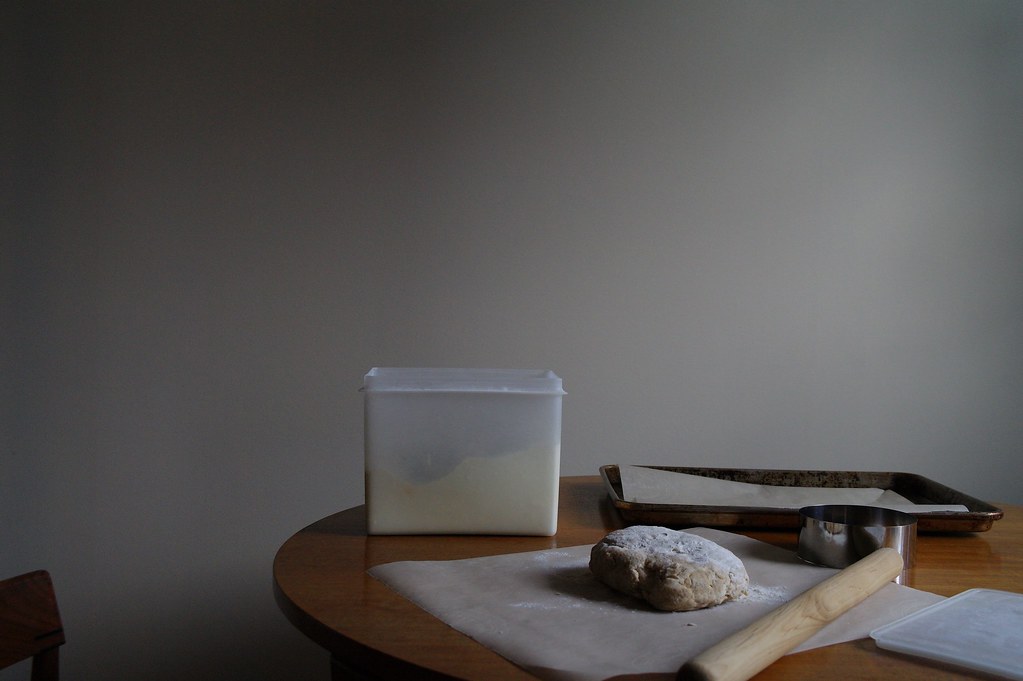 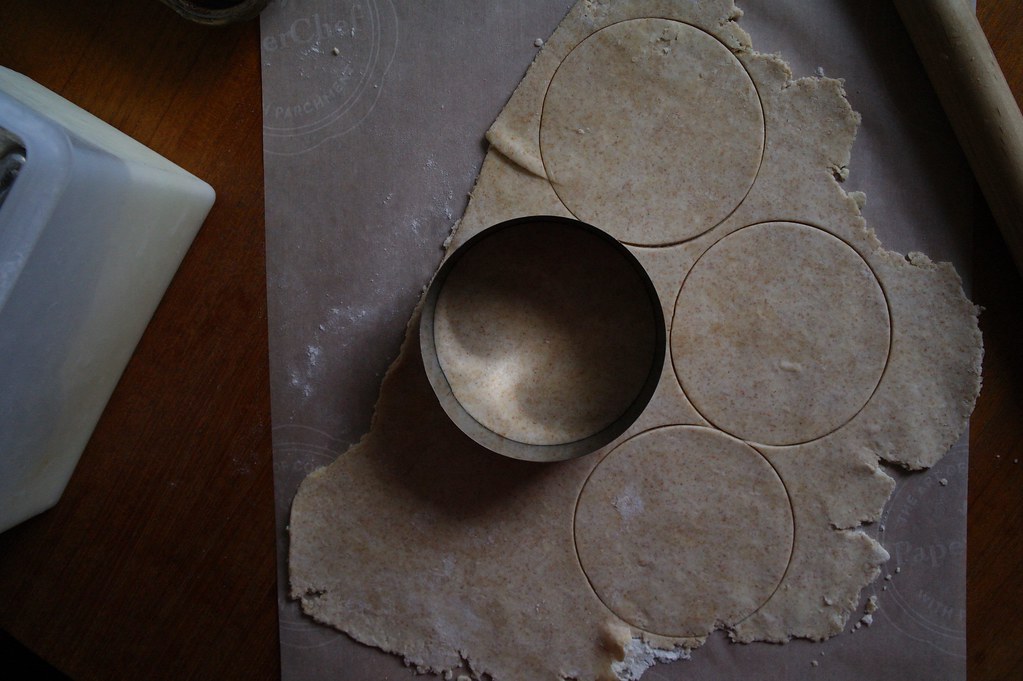 The history of Eccles cakes, as was spelled out from a couple of sources (the Salford government, Salford tourism, and a purveyor of Eccles cakes) goes that it picked up its name in the town of Eccles, though the exact origin of the original recipe is more debatable. At one point it was apparently banned (during Cromwell’s time), but now happily retains the charm of an old classic pastry. 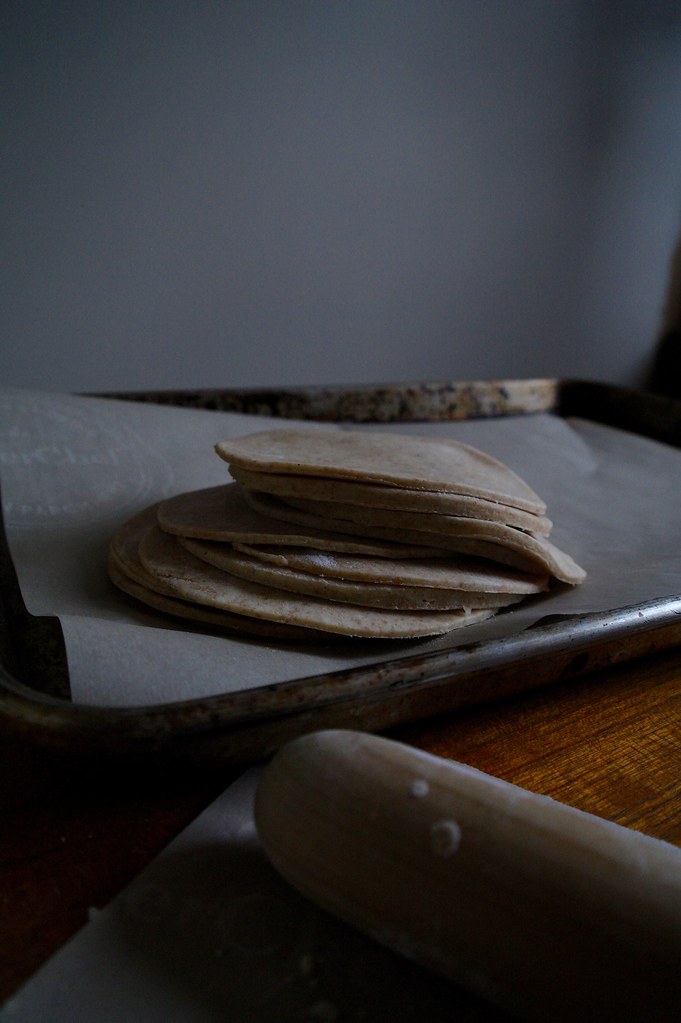 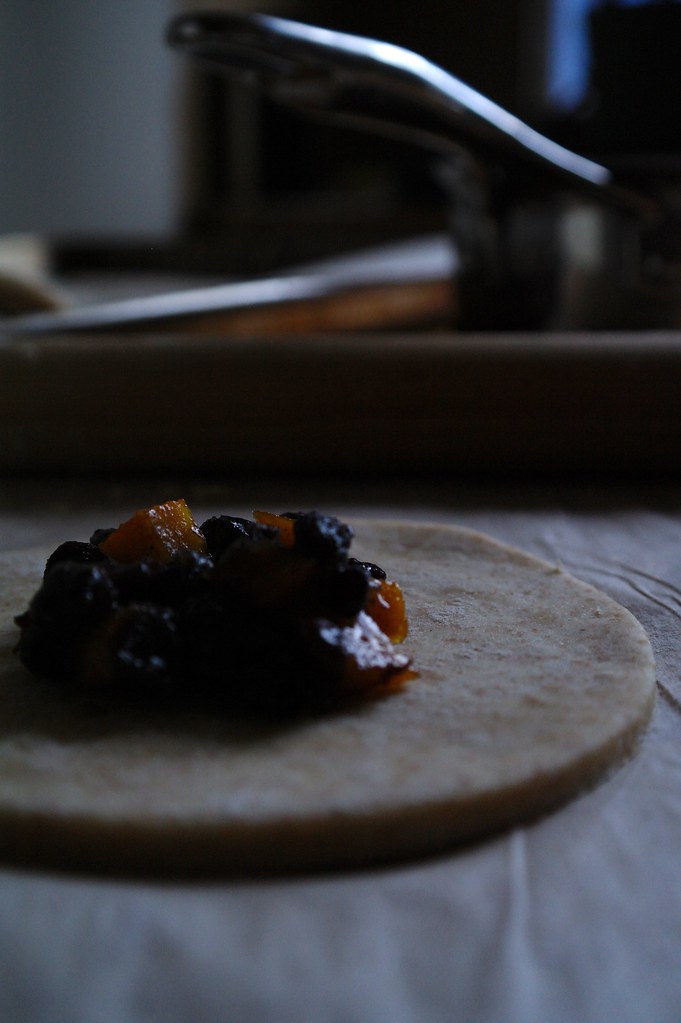 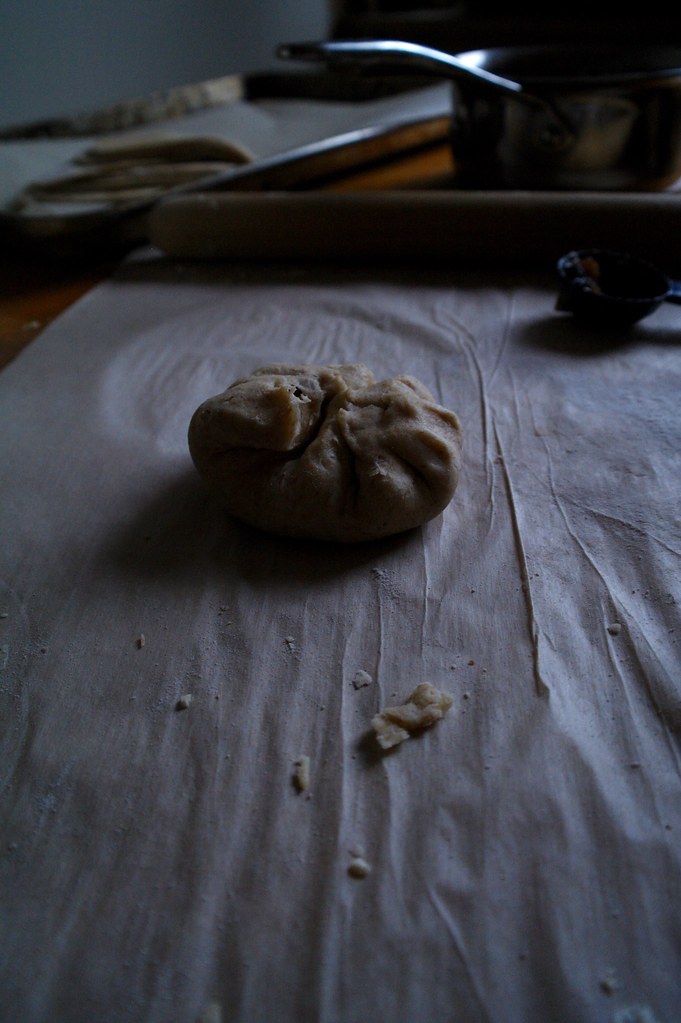 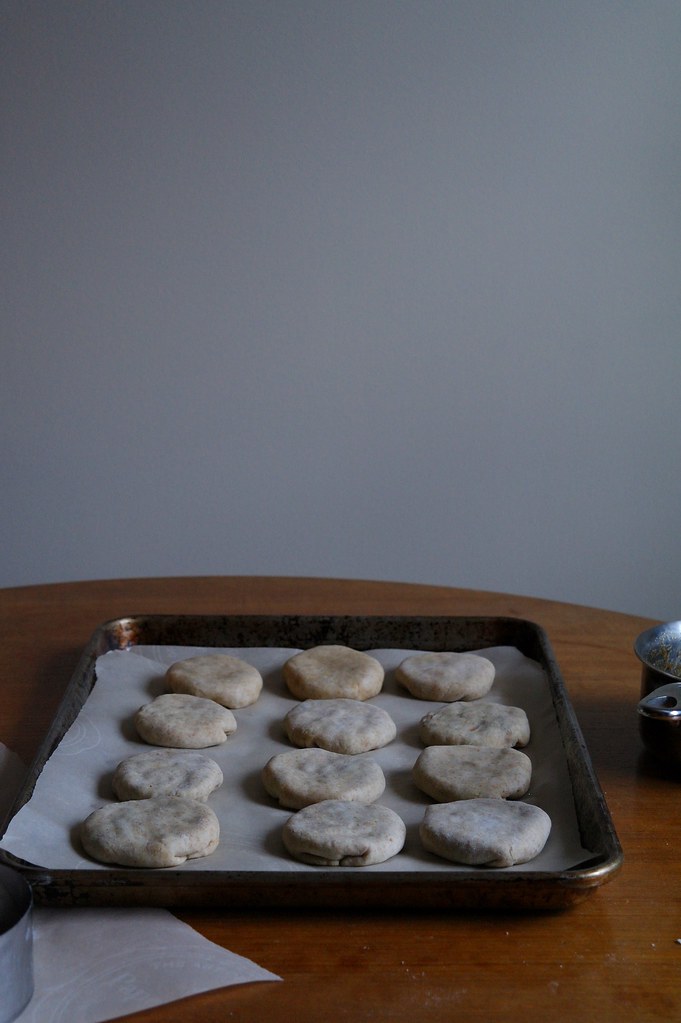 For this version I supplemented the currants (obviously soaked in rum) with candied orange peel and plenty of ground cardamom. I think the pastries would be delicious with any sort of dried fruit–maybe apricots–and even nuts–apricot and walnut?–and various spices, such as nutmeg and allspice I saw in another variation. The filling on its own was quite glorious, a sludge of squidgy dried fruit and candied peel held together by buttery and sugary mass. 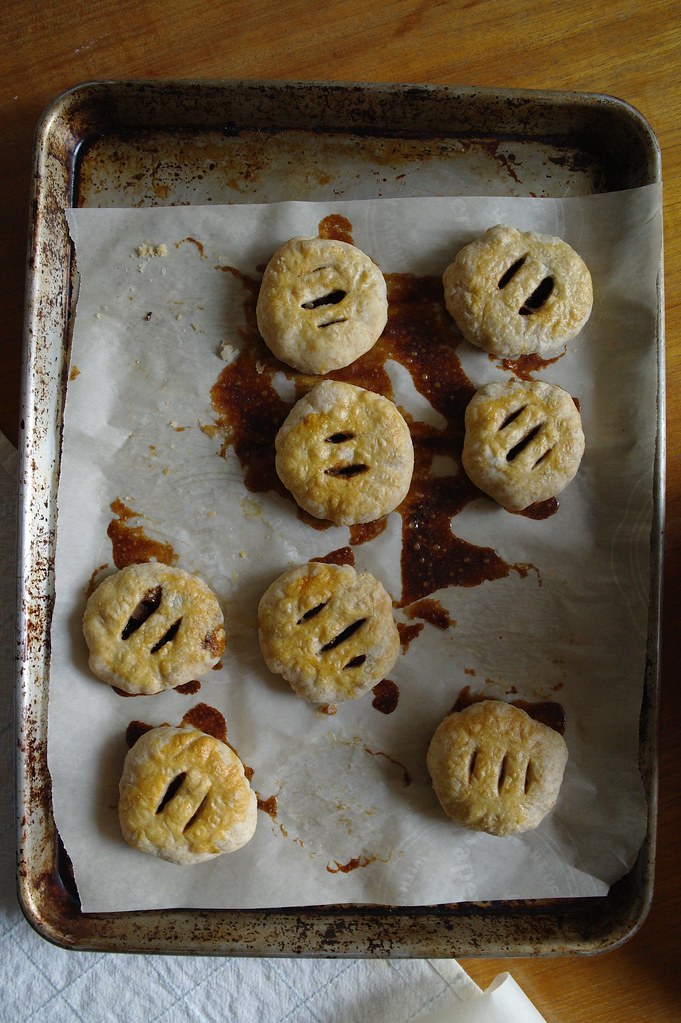 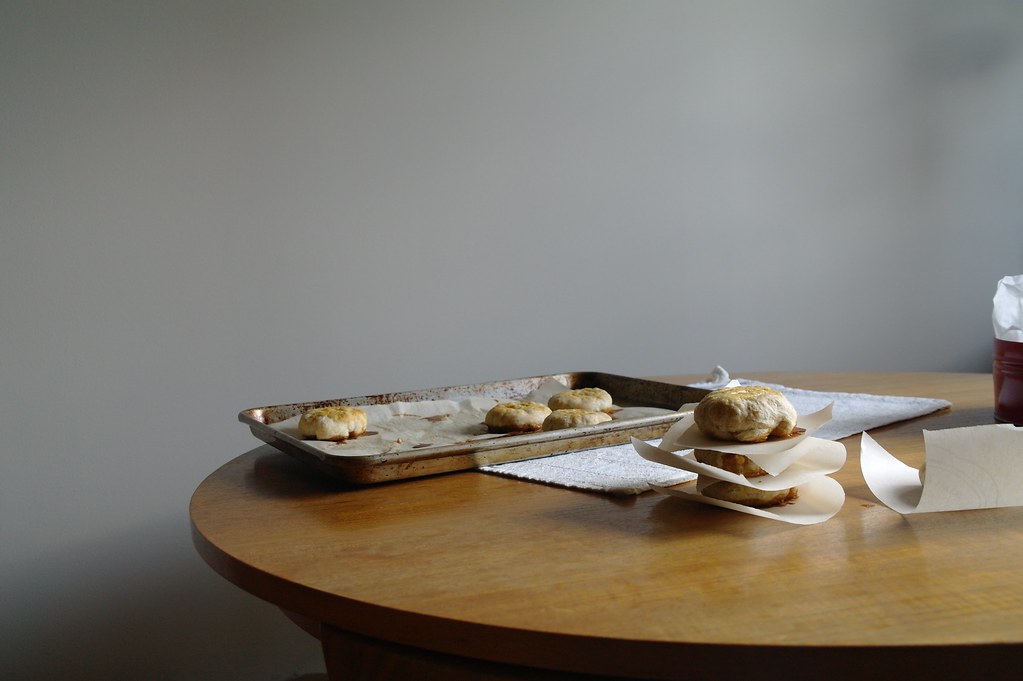 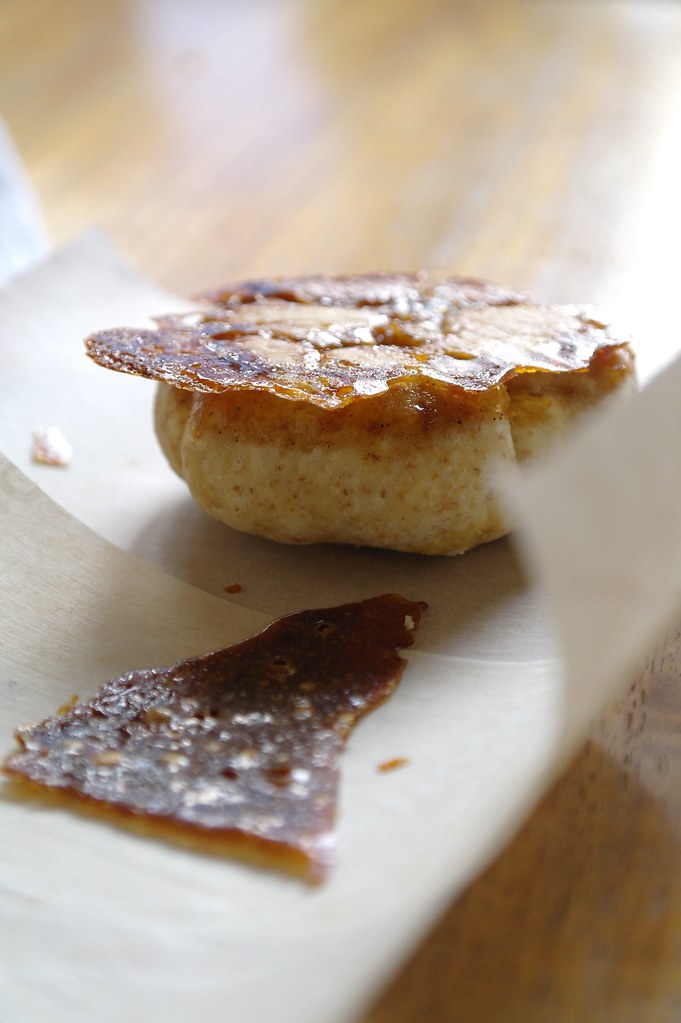 Then what was especially charming about these cakes was the leaky filling, which created a mass of dark sugary shards on the pan and caramel-glossed bottoms. Do try to seal a bit better than me to keep some of that buttery and sugary mixture inside the pastries, but a bit of leakage does seem to have its benefits!

I just made the usual semi-rough puff pastry, but any sort of pie crust or puff pastry would do the trick. 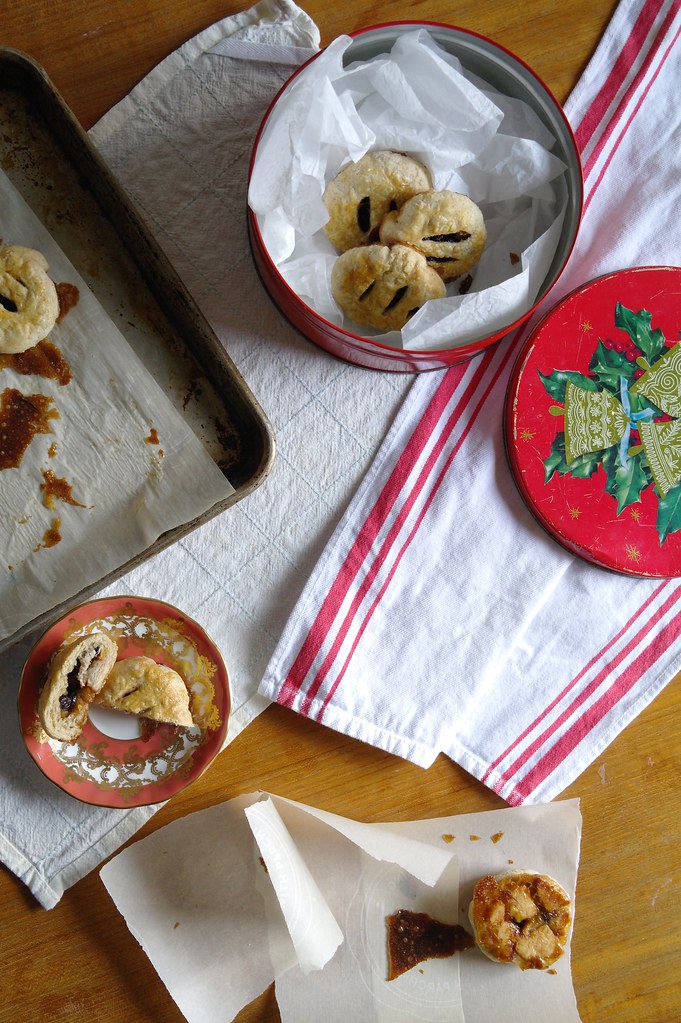 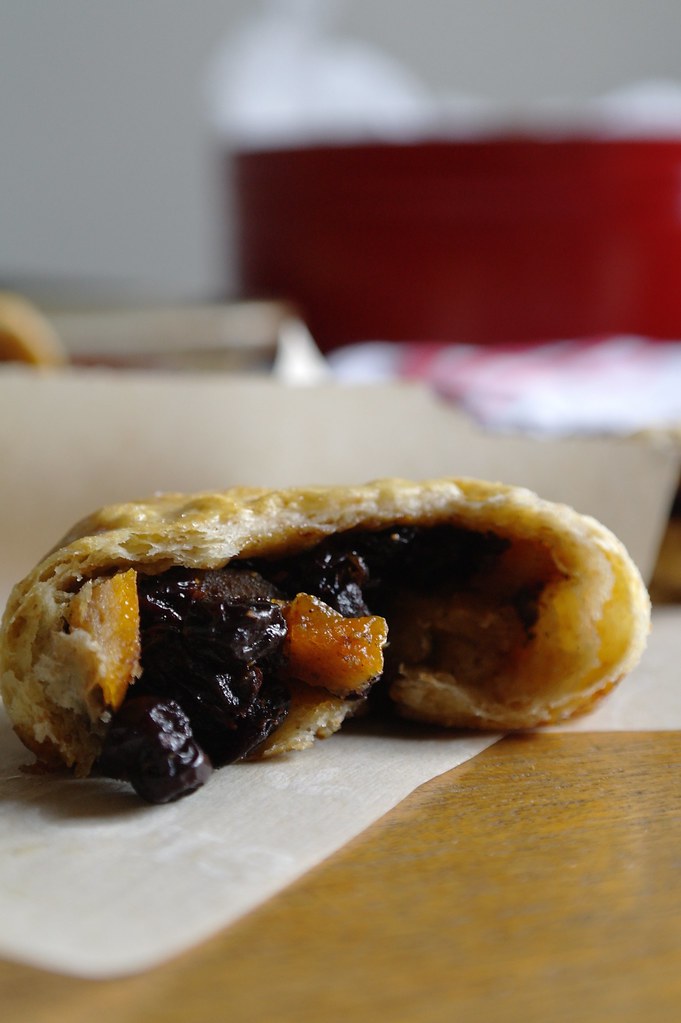 Thanks to Lina for the challenge…and sorry for such a late submission as well! There are other exciting recipes that have been linked up, which can be checked out here. 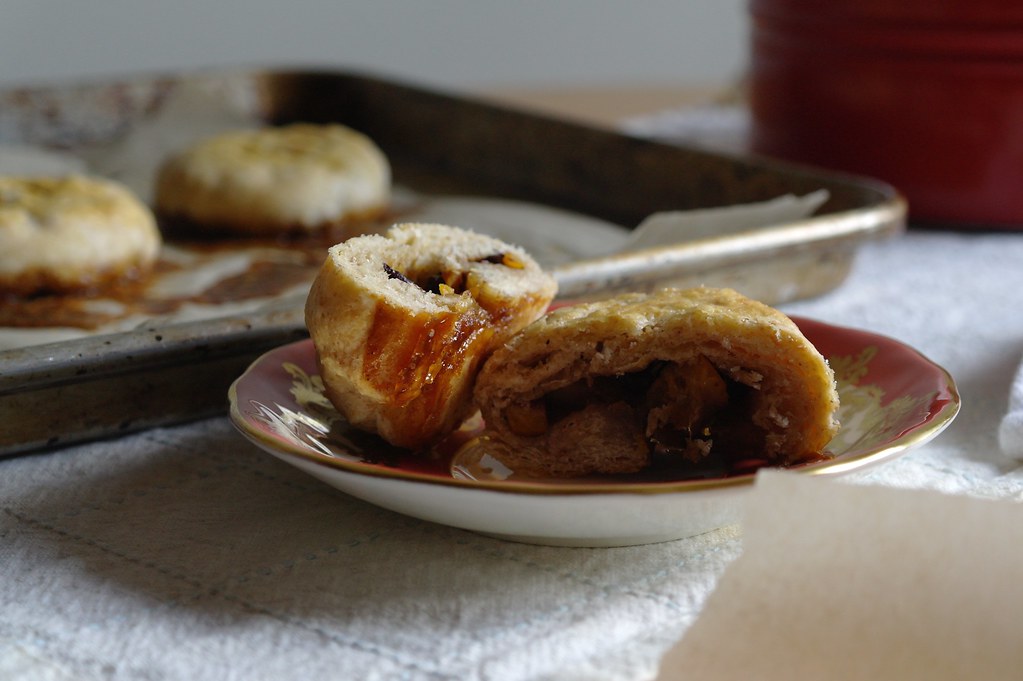 Cut the peel from the orange, including the rind and pith. Slice and then cut crosswise into small pieces. Place in a small saucepan and add enough water to generously cover. Add the cardamom pods, cracking them open, and a scoop of sugar. Bring to a simmer and cook until pith is translucent and tender. Drain, remove cardamom pods, and set aside.

Place the dried currants in a bowl with 2 capfuls of rum and enough boiling water to barely cover. Allow to sit and soak until plumped–as mine were quite dried out, I became impatient and then simmered them a bit on the stovetop. Drain.

In a saucepan, melt the butter. Add the spices and cook briefly until fragrant, then add the remaining two caps of dark rum and simmer to boil off the alcohol. Mix in the salt, brown sugar, currants, and 3/4 of the orange peel. Set aside and let cool completely.

Thinly roll out the pastry, working with one half at a time. Cut out 12-cm diametre circles. Gather up the scraps and re-roll. In total, I ended up with 12 rounds, but probably could have ended up with 14 had I rolled the pastry a bit thinner.

Place 1 generously heaping tbsp on top of each round. Bring up the edges and pinch together, then flip over so the seam is on the bottom. Patting the cake in one’s hands, shape into a fairly flat circle. Place on a baking pan. Cut 2-3 slits into the top of each cake.

Cover and chill briefly to ensure the pastry is cold before baking. Brush each with a bit of egg white and bake for 20-30 minutes or until browned on top.