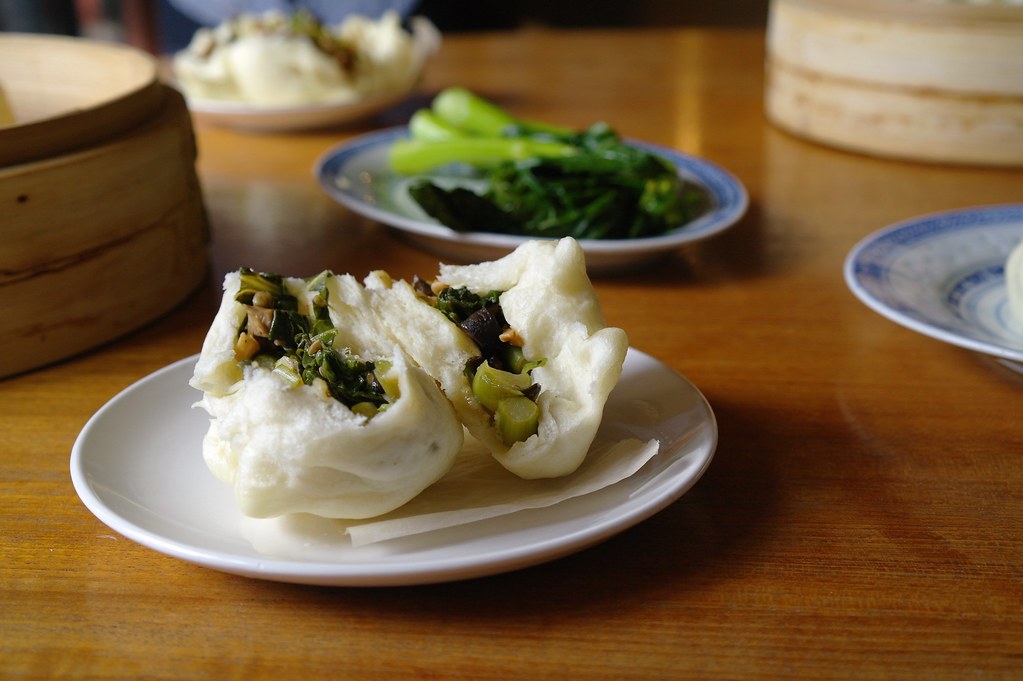 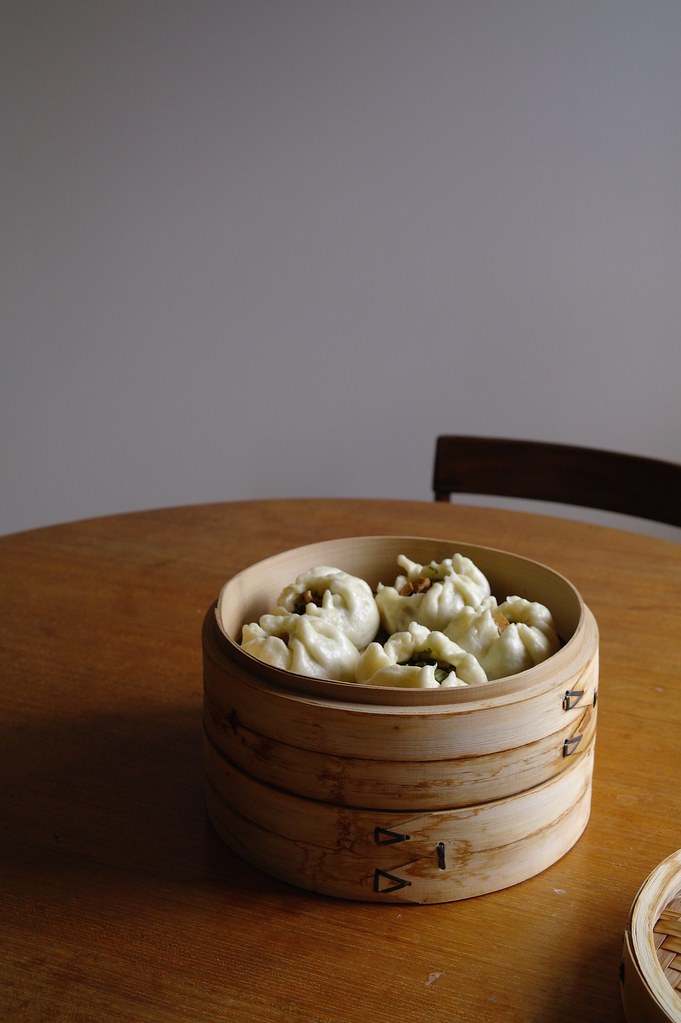 So there was this 100% whole wheat glue, a hideously poor excuse for a bread, palatable only when slathered with butter and sugar and cinnamon, and far more useful for stopping up the corners of drafty windows. And then there was steamed bread. 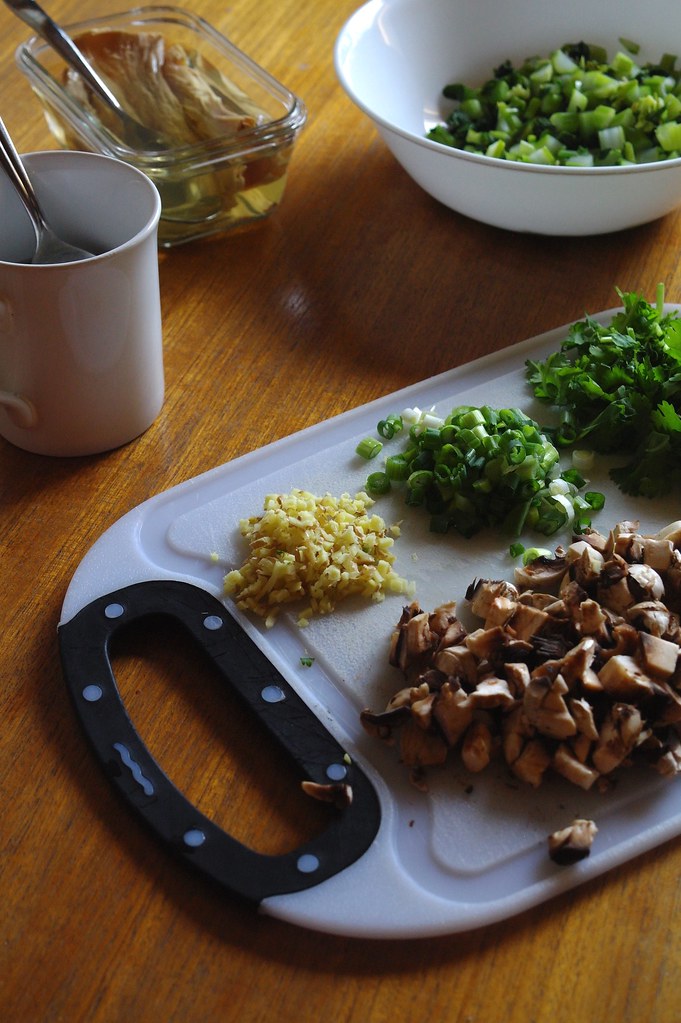 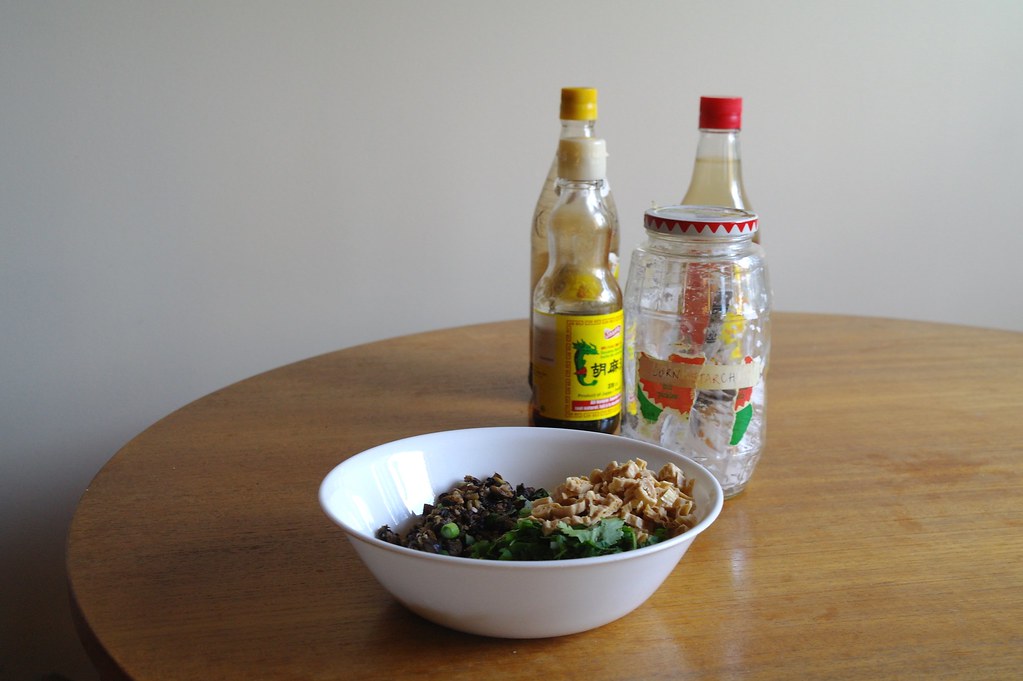 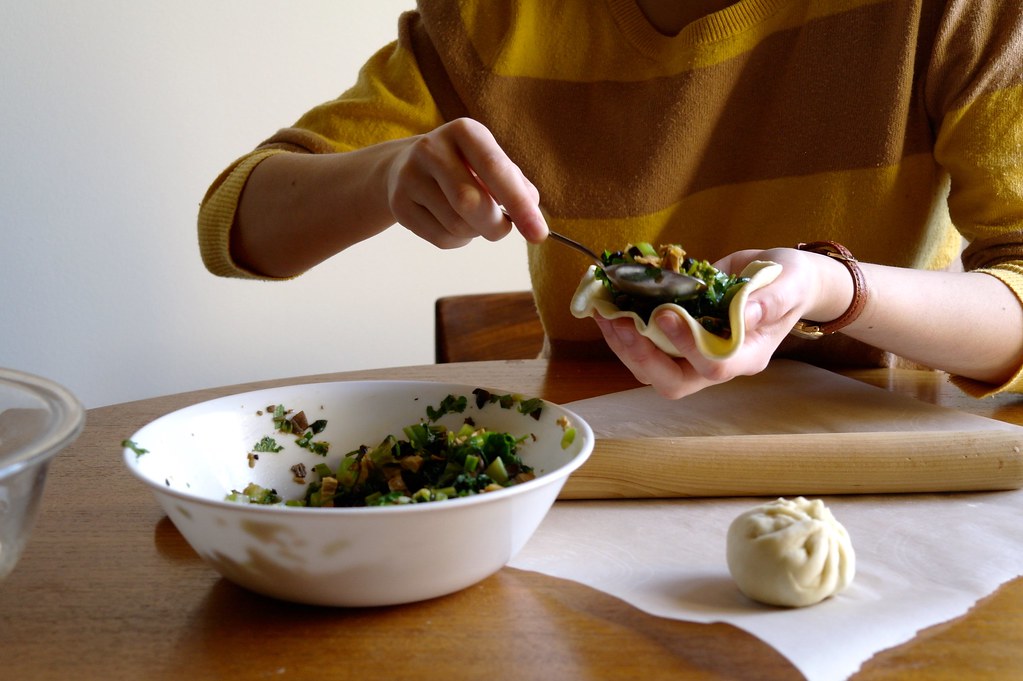 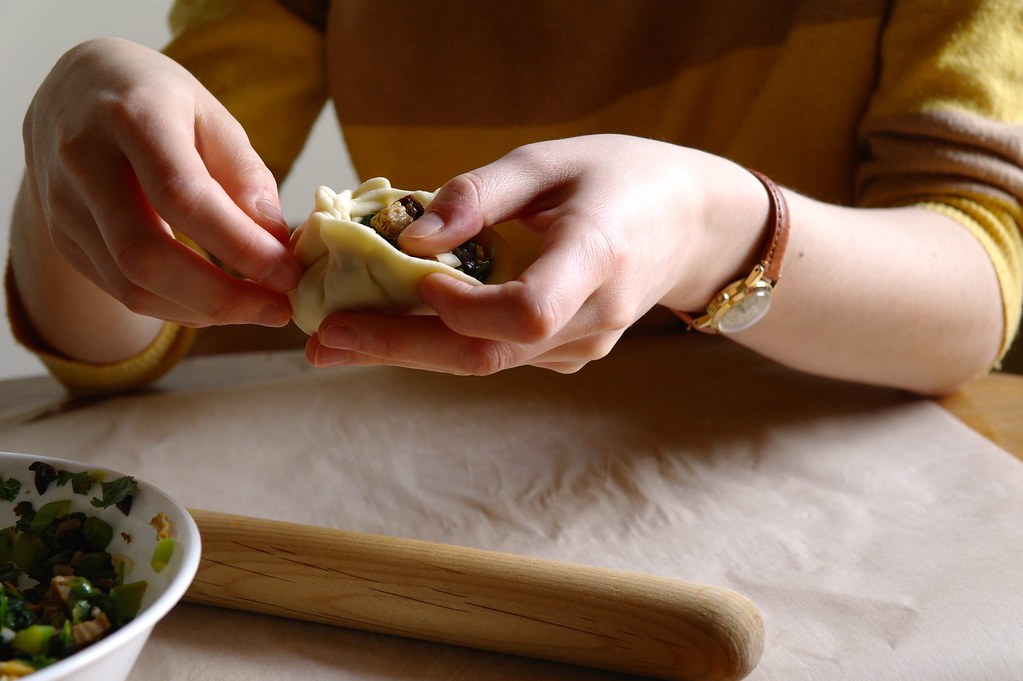 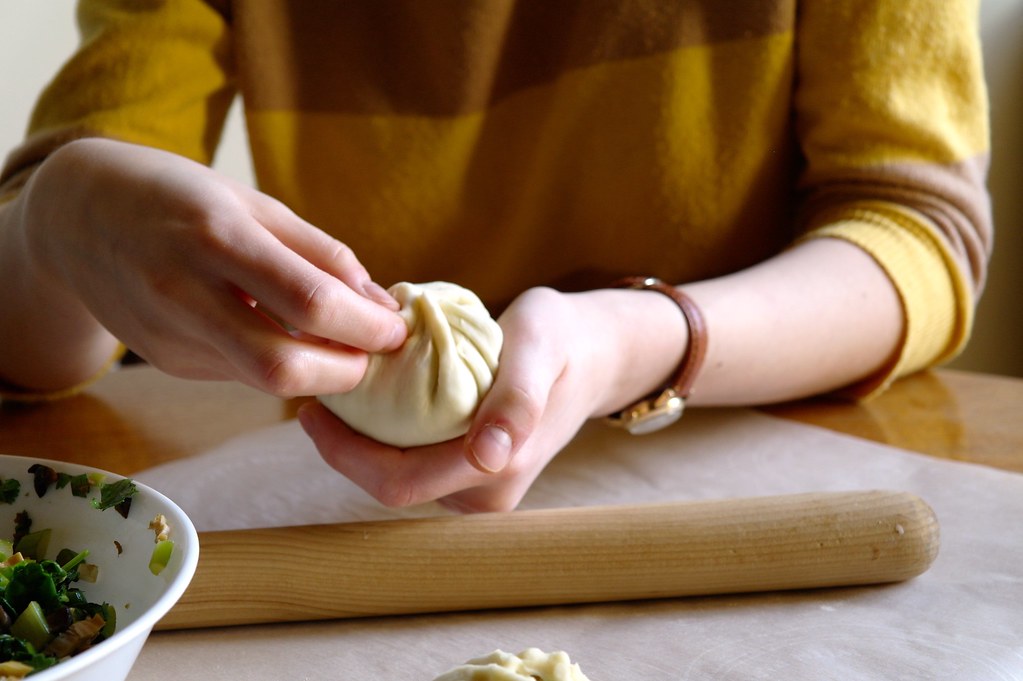 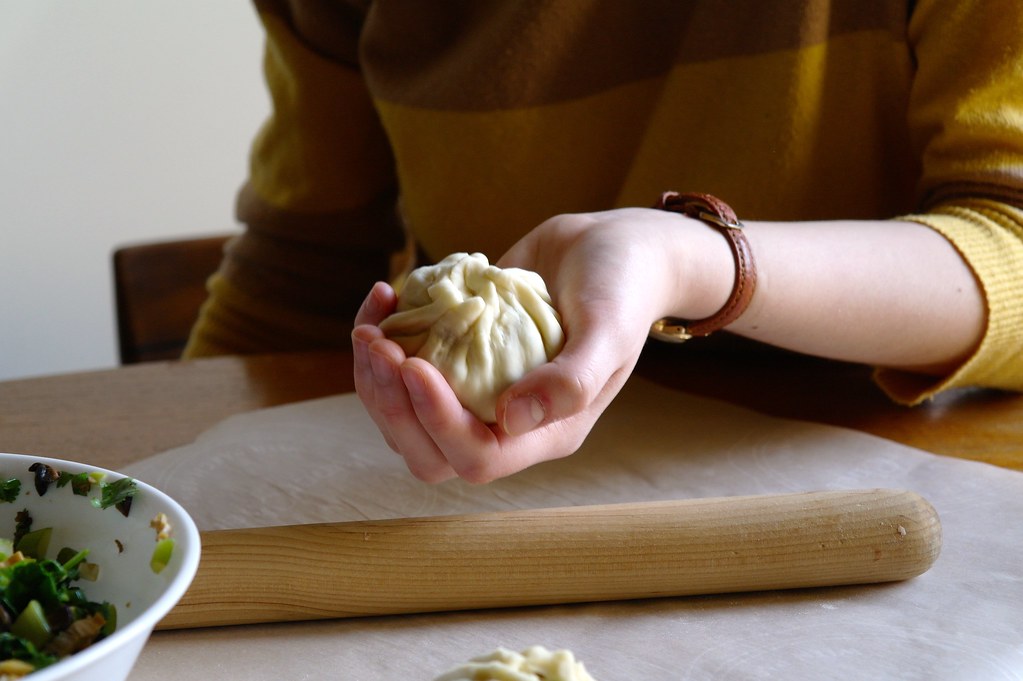 Steamed buns were the Wonder Bread of my childhood. Steamed bread was not whole grain in the slightest, it was pearly and luminescent. And steamed bread was sweet and it was soft and fluffy and springy. There was nothing between you and the glutinous fluffiness, the pillowy fine crumb, and the sweet chewy softness, nothing, especially not a thick crust, bitter with char and with the tears of children who lust after trimmed sandwiches. The thin stretchy skin of steamed buns made them the contents of the dreams.

I would only get steamed bread whenever more distant family came to visit, an even which always warranted going for for dim sum. I would carefully separate the layer of bread from the filling, discarding the meat for my parents or grandparents. I tolerated none of the the saucy cha sui tarnishing the precious experience of steamed bread, which was best enjoyed free of all other flavours or distractions. 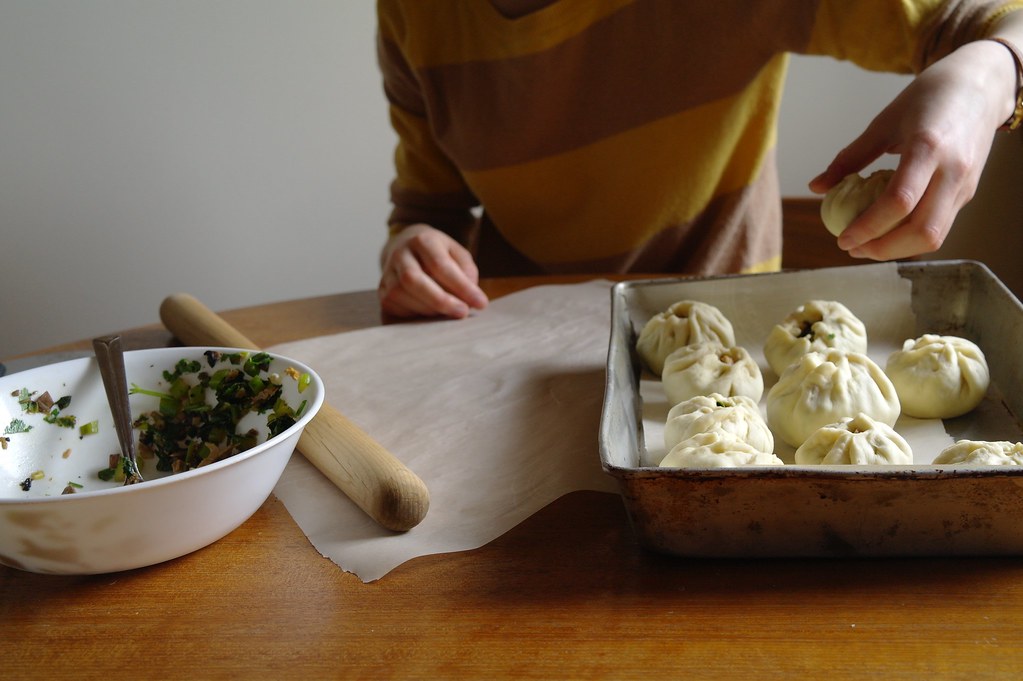 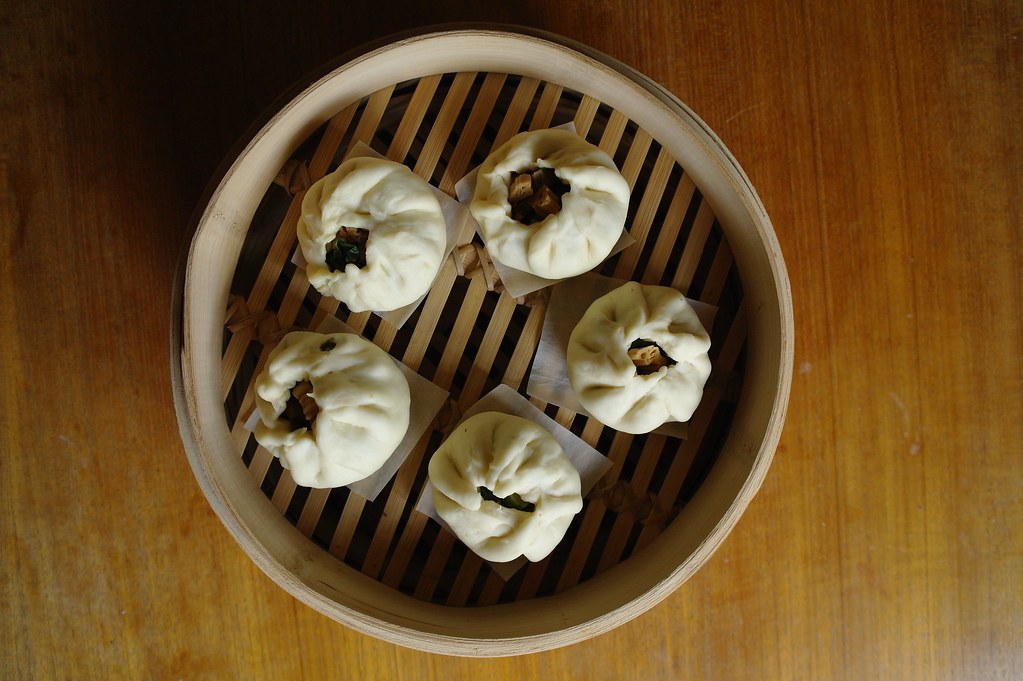 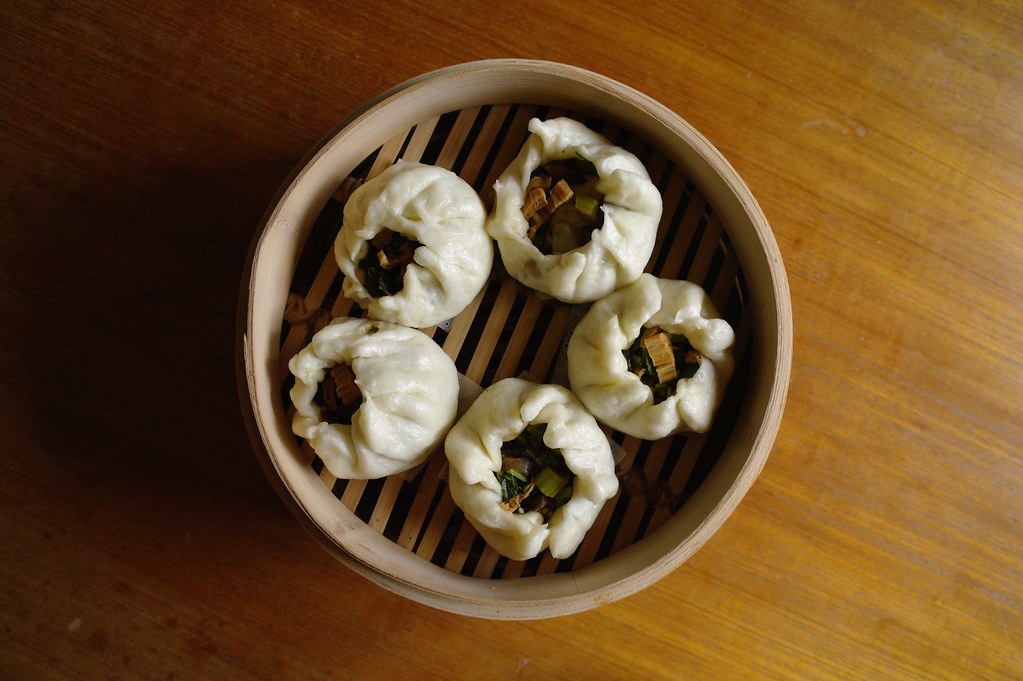 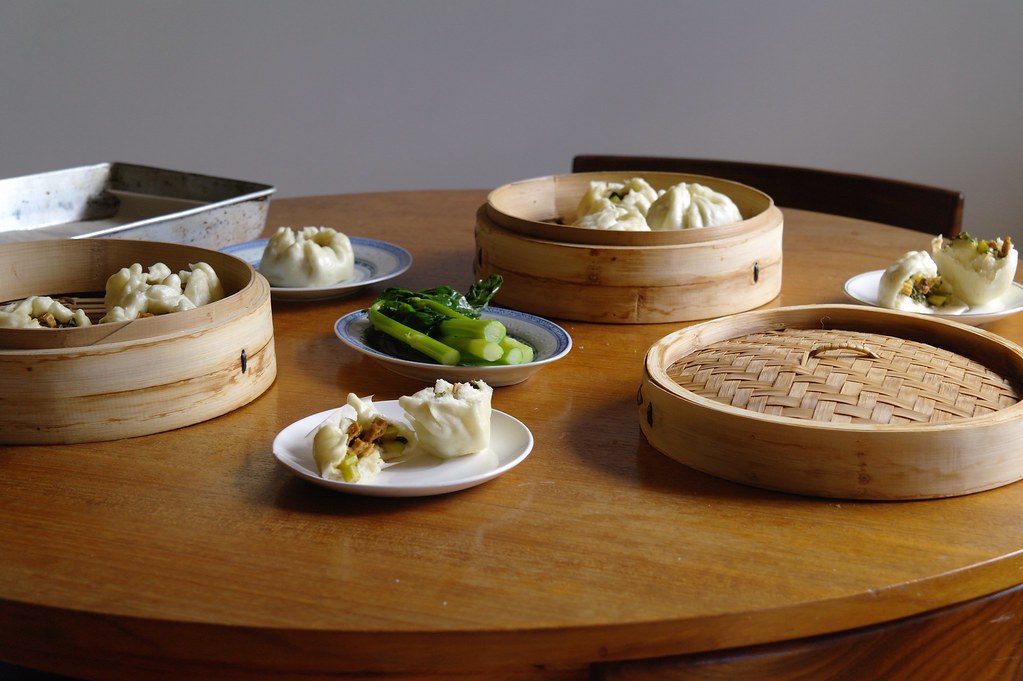 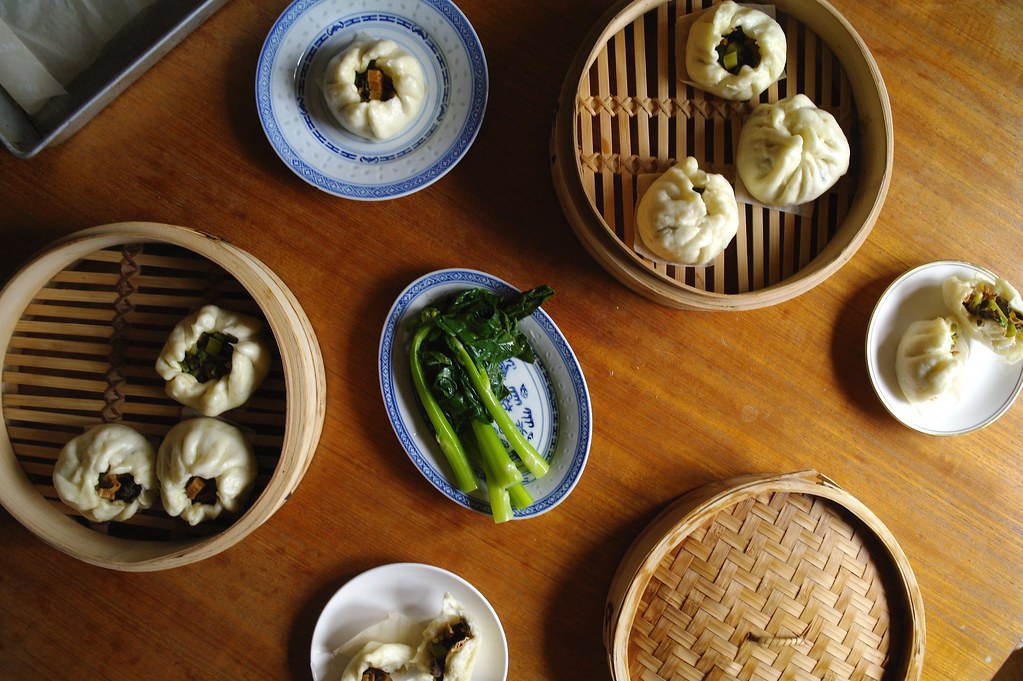 Realizing that I could make my own steamed bread at home was a revelation that came later in junior high school. While it could have been the gateway to perpetual soft bread happiness, alas, the right texture still evaded me. I found the bread tended to shrivel once out of the steamer and were tough and gummy. Distressed, I gave up and I didn’t return to steamed bread until more recently.

I certainly haven’t perfected steamed buns and my sealing could certainly use some more work, but when you have the time–say a nice lazy Saturday morning free–you can have buns in time for lunch. And now I no longer banish the filling to be separated from the bun. As I’ve come to accept the pleasant combination of bun filling and bun itself eaten together, steamed buns having become another vehicle for any sort of filling that one is feeling up to at the time. This was a simple filling, just leftover vegetables cooked with some mushrooms and dried bean curd. 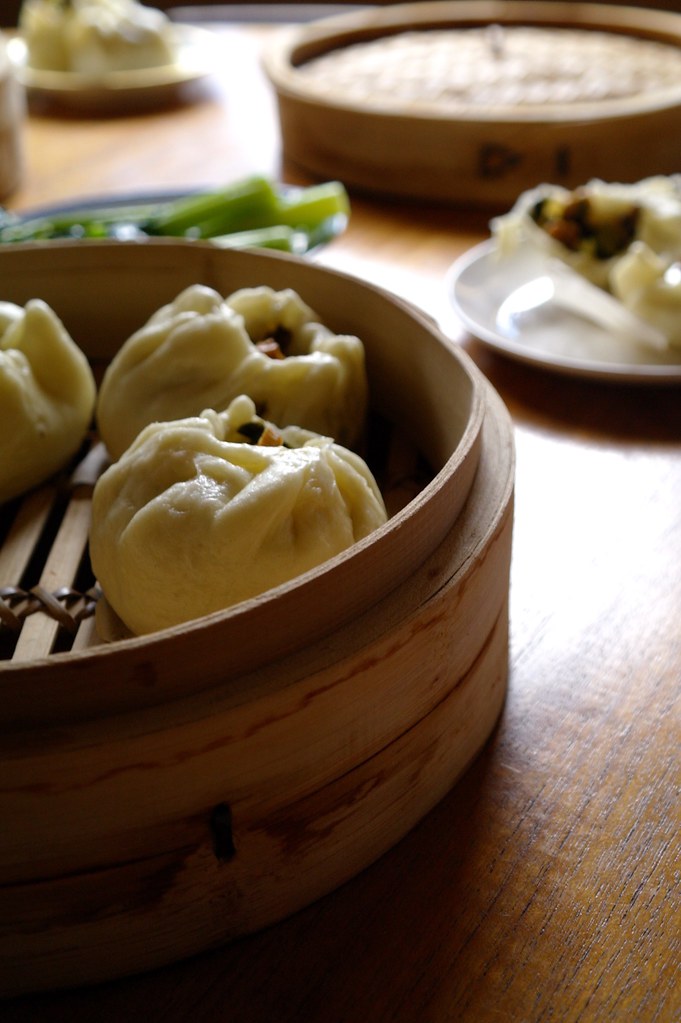 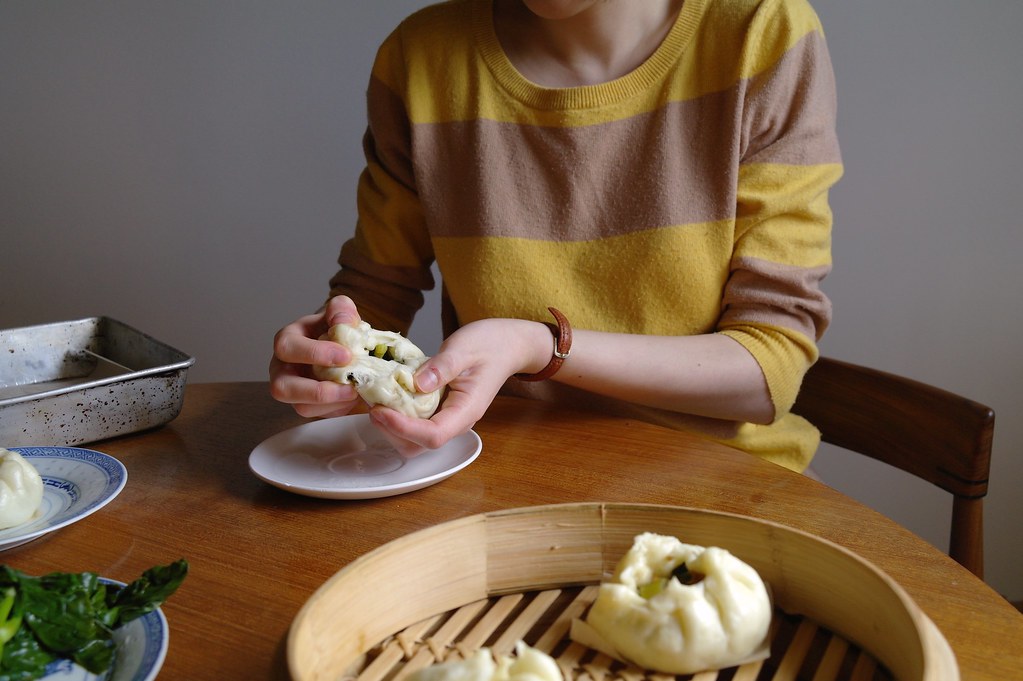 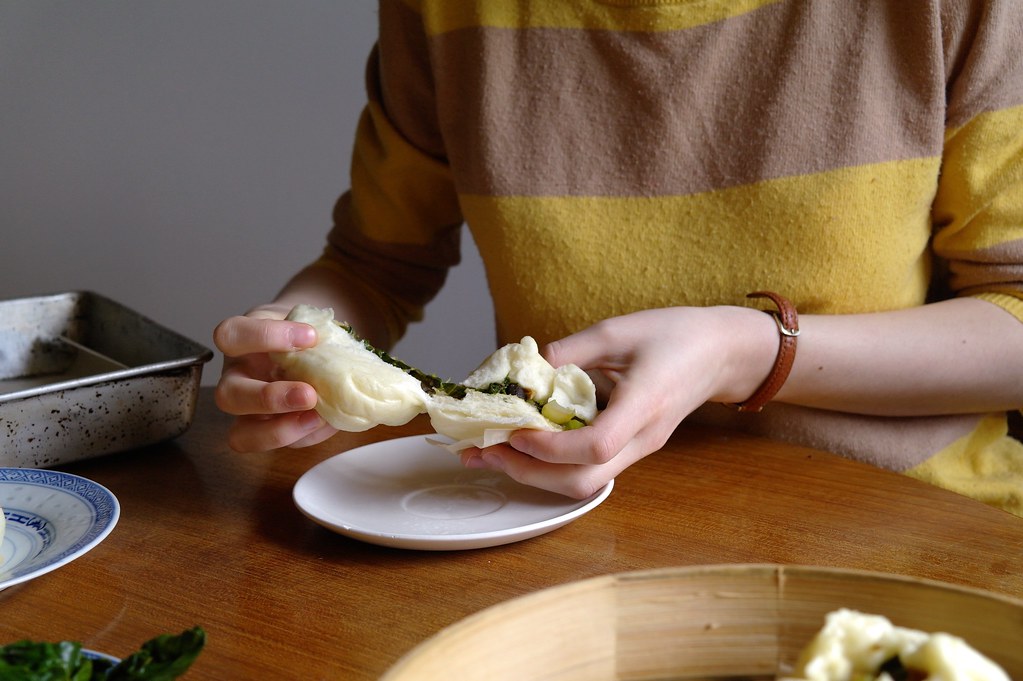 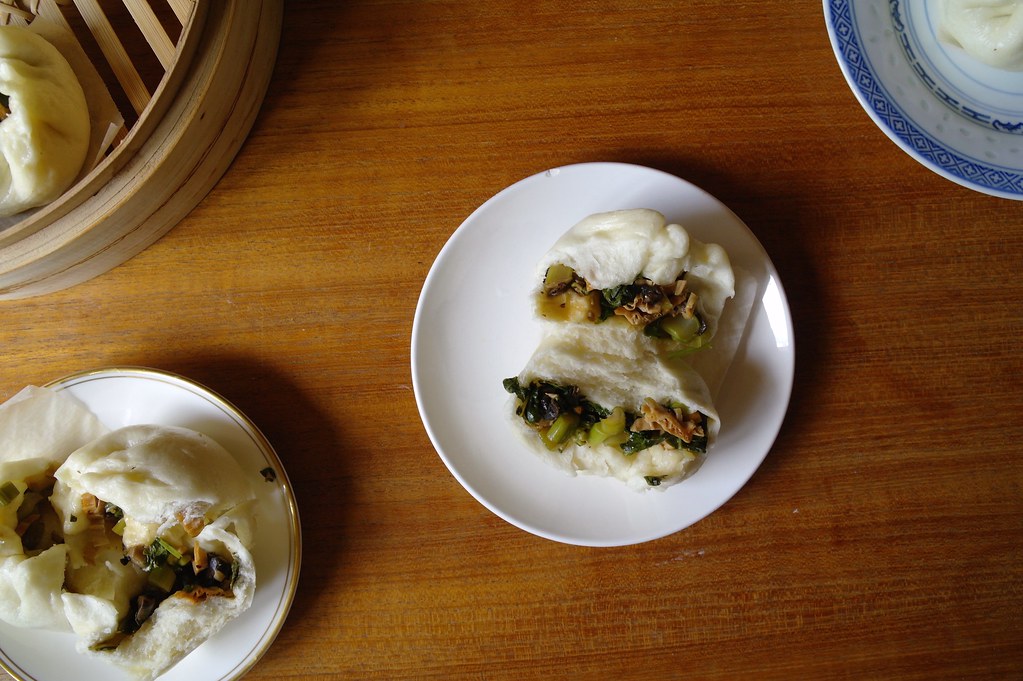 As I explain in the recipe below, the buns have been improving. I’ve found larger buns and thicker layers of bread around the filling facilitate more fluffy texture than gumminess, and careful gradual cooling allows the buns to not collapse. It may not quite be Wonder Bread, but a fresh steamed bun remains a lovely, adequate, somewhat fulfilling thing all on its own. 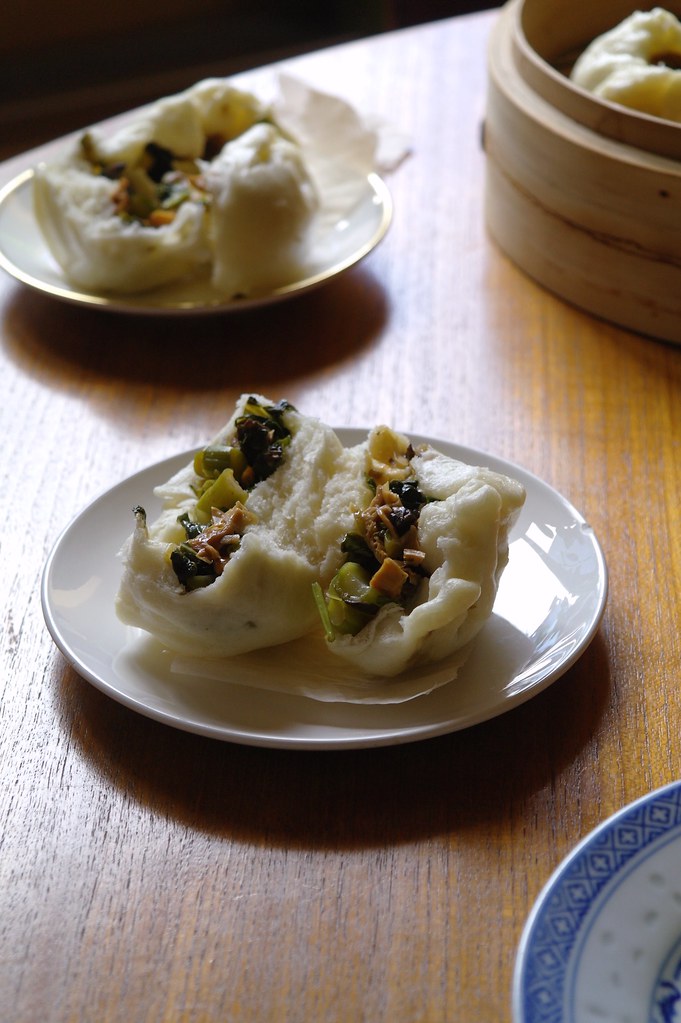 Mix the flour with the sugar, salt, yeast, baking powder. Form a well in the centre, add the water and oil. Mix with a wooden spoon, switching to hands when necessary, to form a cohesive dough. Let rest for 10 minutes, then knead a few times until nice a smooth. Form into a tight round, cover and let proof until doubled, either in the fridge overnight or for around 40 min to 1 hour at room temperature.

Cover the dried bean curd and shiitake with boiling water and let soak. The bean curd should preferably soak overnight, but if not, instead you can soak until pliable, thinly slice crosswise, and then continue soaking–the smaller pieces will soften completely through very quickly. Squeeze the excess liquid out of the sliced bean curd and shiitake.

Remove the stem from the shiitake, thinly slice the cap crosswise and then cut perpendicularly into small pieces.

Finely chop the green onions, chop the cilantro (include the stems too, chopping them more finely). Chop the vegetables into small pieces as well; if leftover gai lan, cut the stem lengthwise into halves or quarters and then cut crosswise into small pieces. Be sure to squeeze out any excess liquid.

Combine all the prepared ingredients in a bowl. Season with the soy sauce, sesame oil, black vinegar and white pepper; taste and adjust as necessary. Lastly, mix in the cornstarch to sop up any excess liquid.

To fill the buns, roll the dough into a log and cut into pieces. For a nice small-medium bun, I like 40g of dough (you will get around 10-11), whereas a larger bun can use 60g of dough (6-7 of those). Roll each piece of dough into a ball, ensure they stay covered to prevent drying out, and let rest for a few minutes.

Take one round of dough and roll into a small circle, then begin rolling just around the edges. You want to end up with a round of dough which has a thicker round centre and thinner edges–as you’ll be pleating the edges together, this is useful to ensure a more even distribution of dough around the filling. Place the round of dough in the palm of your non-dominant hand and place 1-2 spoonfuls of filling in the centre. Use your thumb and fingers of your dominant hand to make folds of dough and pleat them together, turning the bun in a clockwise manner as you do so. Are you make one go around the bun, you may likely end up with a pleated top, but a rather large gaping hole in the middle, so then go around a second time, tightening and pulling together the dough in a clockwise direction until you end up with a sealed bun.

If you notice, my buns were rather poorly sealed–the filling is a bit greasy so I believe the bit of oil from the excess filling caught between the folds of dough helped them spread apart when expanding and steaming. Something to work on!

Left over filling can be used for dumplings or even briefly heated in a pan and eaten with rice.

Place each bun on a small square of paper, cover and let rise until puffed, around 20 minutes. Place in a steamer with some water, and set over high heat. Once the water is boiling, turn down the heat a bit to maintain a vigorous simmer and steam for around 8 minutes (maybe a bit longer for larger buns). Remove the steamer from the heat, and let gradually cool down with the lid still firmly on for 10 minutes–otherwise when opening the lid, the cold air can cause immediate and devastating shrinkage of otherwise lovely and fluffy steamed buns.

Also, for more attractive buns, seal the top more and try to avoid getting too much oil from the filling cause between the pleating… I’ve since gotten better at pleating buns thankfully! Here is a batch of buns filled with some lap cheung, vegetable and egg: 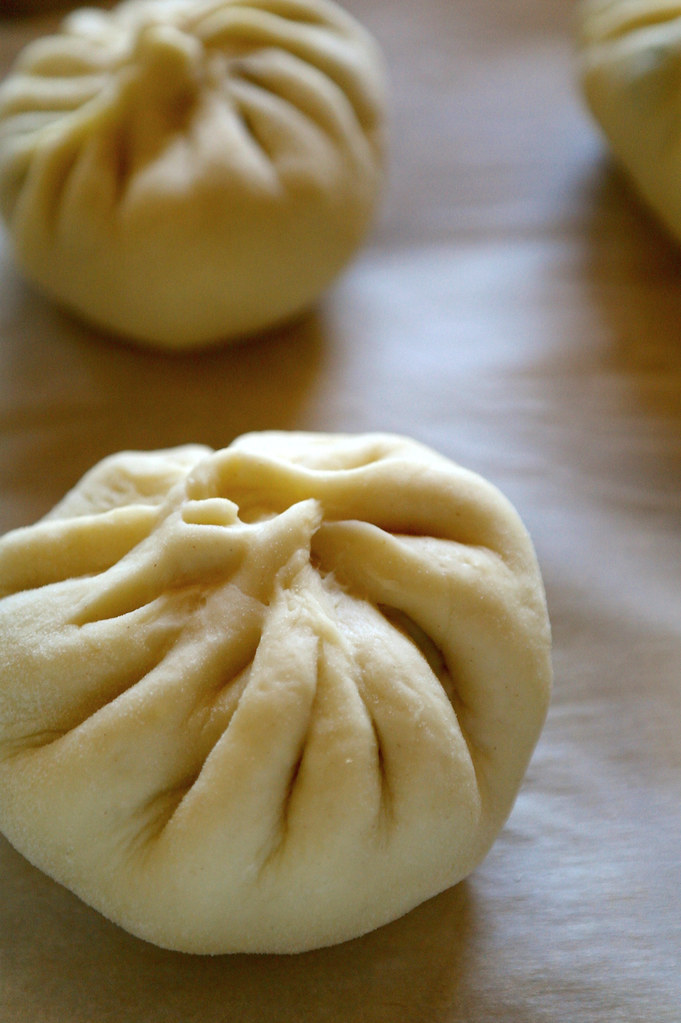 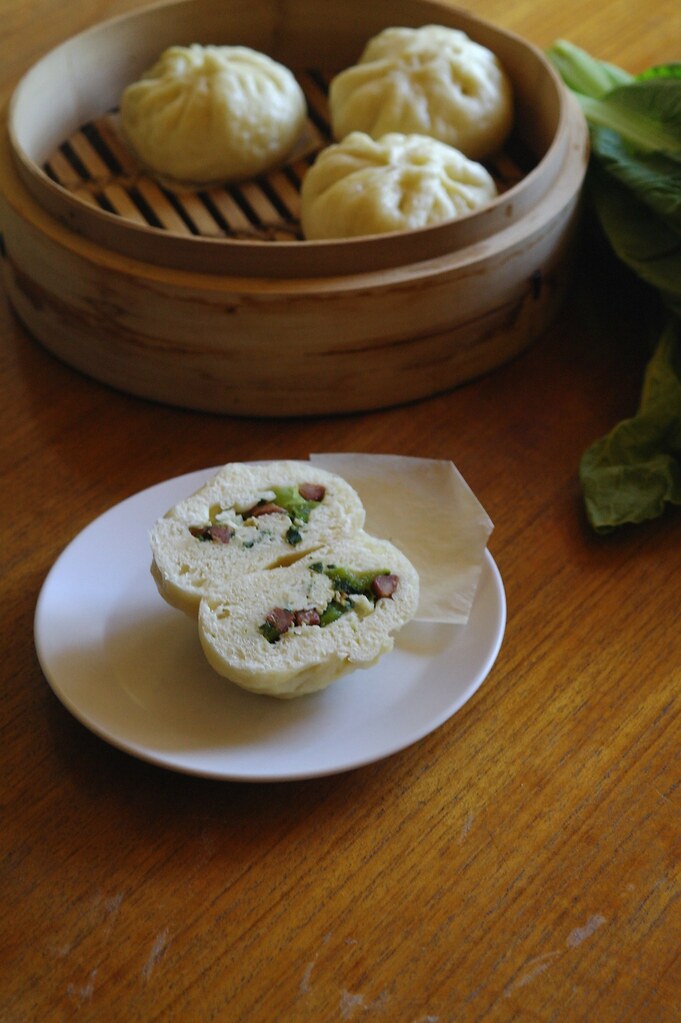