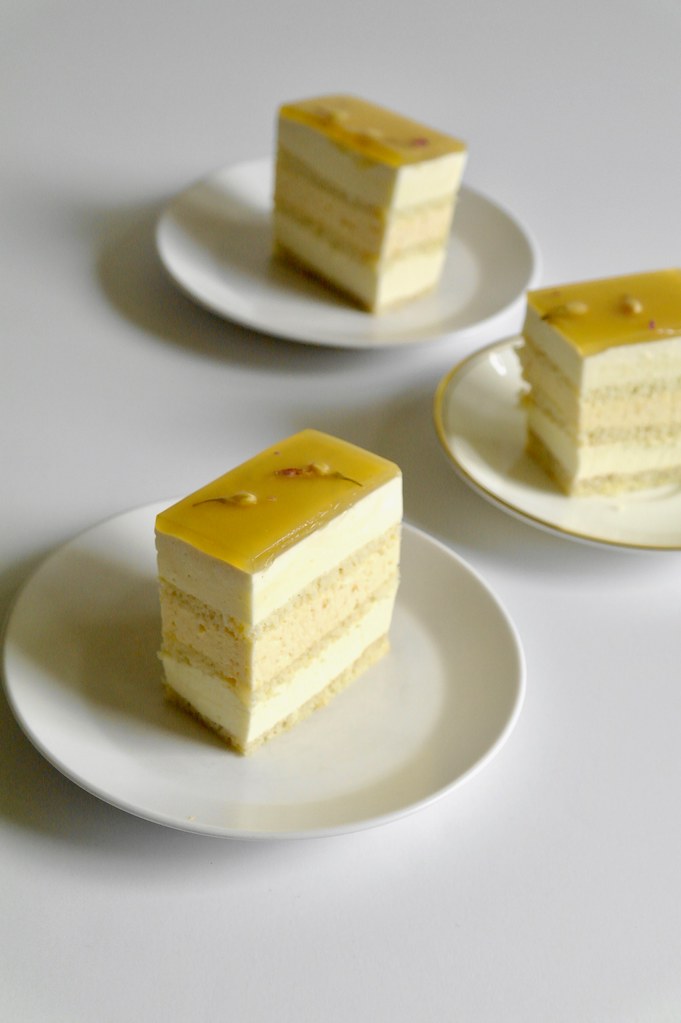 For the second go at a mousse cake, I wanted to try out something multilayered. Though to keep it a bit simpler, a multilayered single cake made all in one pan with all layers the same size and none being contained within the other. If that makes sense.

I based the structure of this cake off of Tartelette’s mango and chocolate mousse cake. As all the mousse layers are separated by a layer of cake, it can be assembled all at once without needing to wait for each layer to set.

Any time I have an infusible component, I always think lemongrass. And this time, combined with cardamom, both of which are (vaguely or not-vaguely) citrus flavours. It was actually a really lovely combination, the sort where it doesn’t taste like lemongrass + cardamom but something else, smooth and light and ambiguously citrusy. This was alternated with a middle layer of peach mousse, and to try to keep everything on theme, I used a lemongrass tea for brushing the cakes and for the top layer of jelly.

I think the proportion of peach mousse should have been increased as its flavour was more subtle than the lemongrass and cardamom. Otherwise, I found it an enjoyable and light cake – though if you feel the weight of the whole thing, it was literally very heavy. 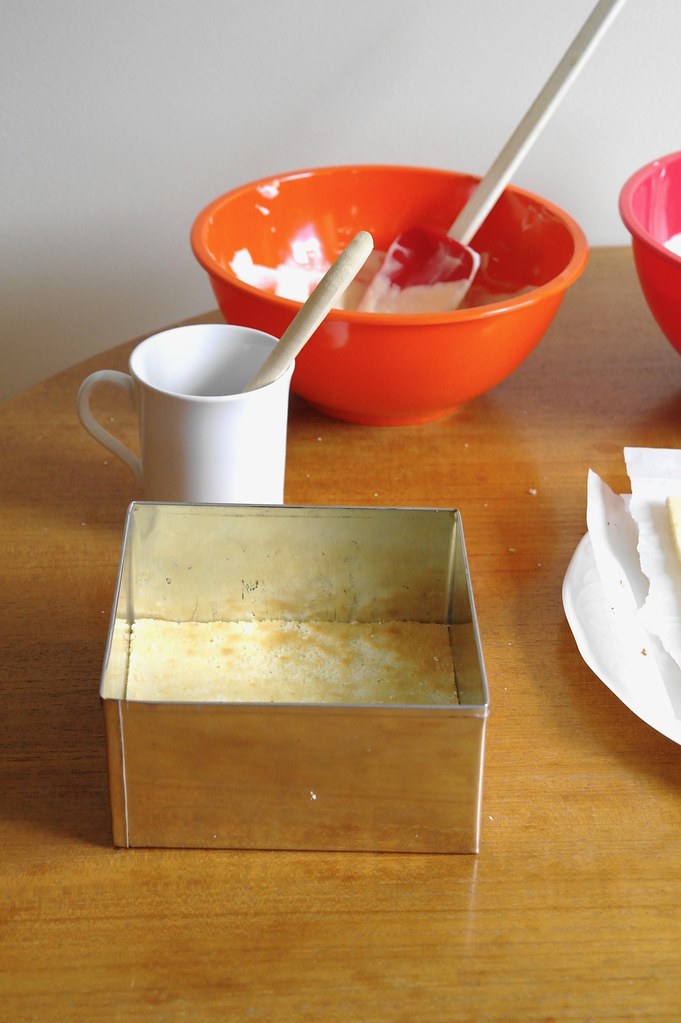 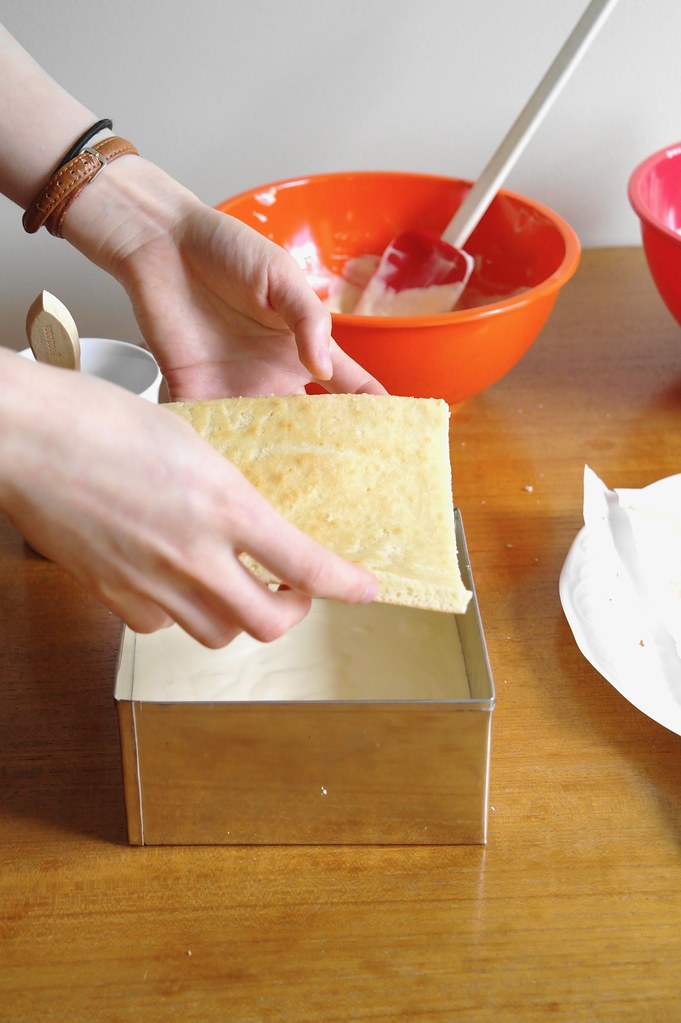 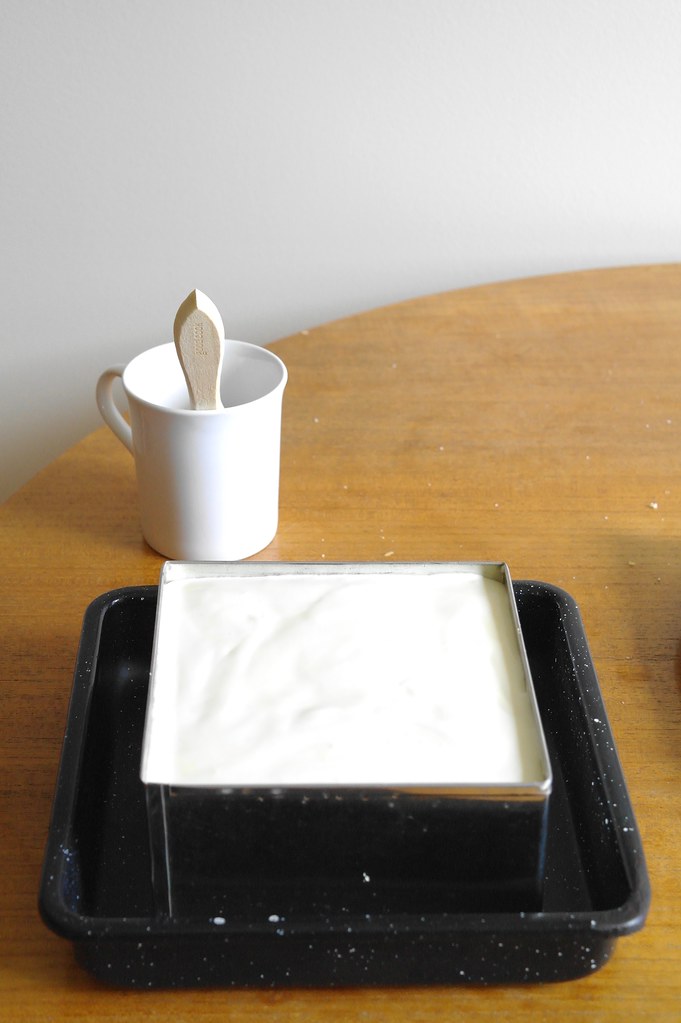 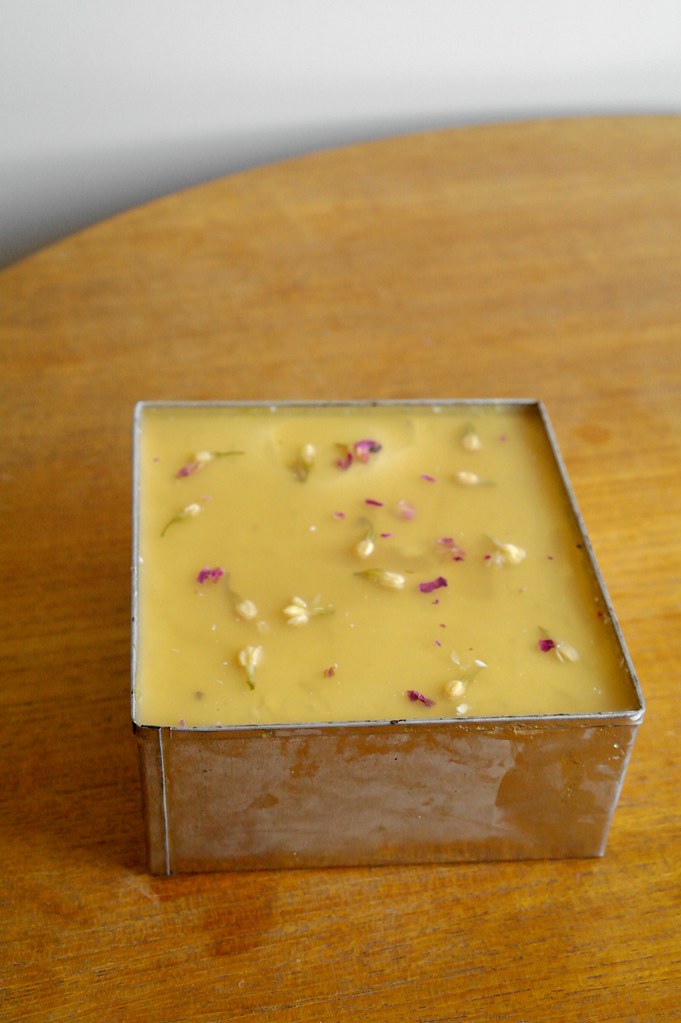 Cake layer evenness – somehow I need to learn how to spread a cake more evenly as it was rather thick and places and rather thin in other places. I would generally consider the cake that I made too thick (well, at least in places), but given that the mousse layers ended up quite thick, the thickness of the cake didn’t seem out of place.

I really like the flavour and heft (yet still flexibility) that a joconde sponge has over a genoise…but it uses a lot of ground almonds! I didn’t realize how much 100g of ground almond was until I was measuring it out. As nice as it was, I think my almond budget may prefer a genoise for future so I can save the almonds for something else.

Scaling quantities – I was a bit silly and just decided to keep the same quantities of mousse as for the original recipe’s 8″ cake as my 6″ cake pan was quite tall (3″). While in the end I almost used all of the lemongrass cardamom mousse, I barely had any room left in the pan, and it was just filled up to the brim with the jelly. These quantities do work for a pan of this height but it’s close! As it was so tall, cut into small pieces when serving.

If working with a shorter pan, either use a larger size or scale down or just don’t use all of the mousses. If scaling for an 8″ square instead of 6″ – make no changes to the quantities of mousse, though the cake and jelly layer may need adjusting.

Jelly layer – Despite all the other issues, after the final layer of mousse set and then the jelly was poured, it was looking actually quite nice, with a perfectly set jelly as smooth as the surface of a skating rink.

But somehow, I ended up spending just as much time on the jelly as everything else. It turns out the back of the fridge is quite chilly because the next day I discovered that 3/4 of the jelly had frozen over and I lost the smooth surface–and I think jelly doesn’t thaw all that well either? Perhaps I was being overly reactive, but I scraped it off with a butter knife, and poured a new layer of jelly over the newly shorn cake. However, the jelly no longer lay on a beautiful smooth layer of mousse, but instead a cratered field that I had created whilst wielding the butter knife. Little chunks of dislodged mousse lay suspended in the jelly layer like scummy lint. In then end I tried to distract from the underlying roughly hewn mousse by adding crushed dried rose petals and some rehydrated dried jasmine flowers – of acceptable aesthetic value, but rather irrelevant to the flavour profile of the cake itself.

Things were looking up on the jelly front, but then I discovered that the jelly hadn’t completely set. I had run a bit low on gelatin while remaking the jelly, but I figured that what I had (a rather scant 1/2 tsp) was surely sufficient. It wasn’t. Pouring off the jelly again, it did make for a strangely-textured, but decently-flavoured protein-rich cup of tea.

What you see is the third rendition of the jelly. At that point I was determined to not put any more time into this cake so photographing was very brief and minimalistic (and not in an aesthetic sense of the word).

General impressions – Overall, I ended up really enjoying this cake. It’s fairly subtle, and very monochrome, but I enjoyed all of the flavours in it – it tasted rather clean somehow, like a uselessly fatty palate cleanser incorporated into a mousse cake, and appearances most definitely aside, I found some elegance in the repetition of the layers, and how flavours were re-encountered as you worked your way through the cake. The lemongrass and cardamom mousse was the star; I think an equal proportion of the lemongrass-cardamom and the peach mousses would have been preferable to make the cake more peach-centric. The sweetness of the cake was very minimal though, so do increase as per your preference. 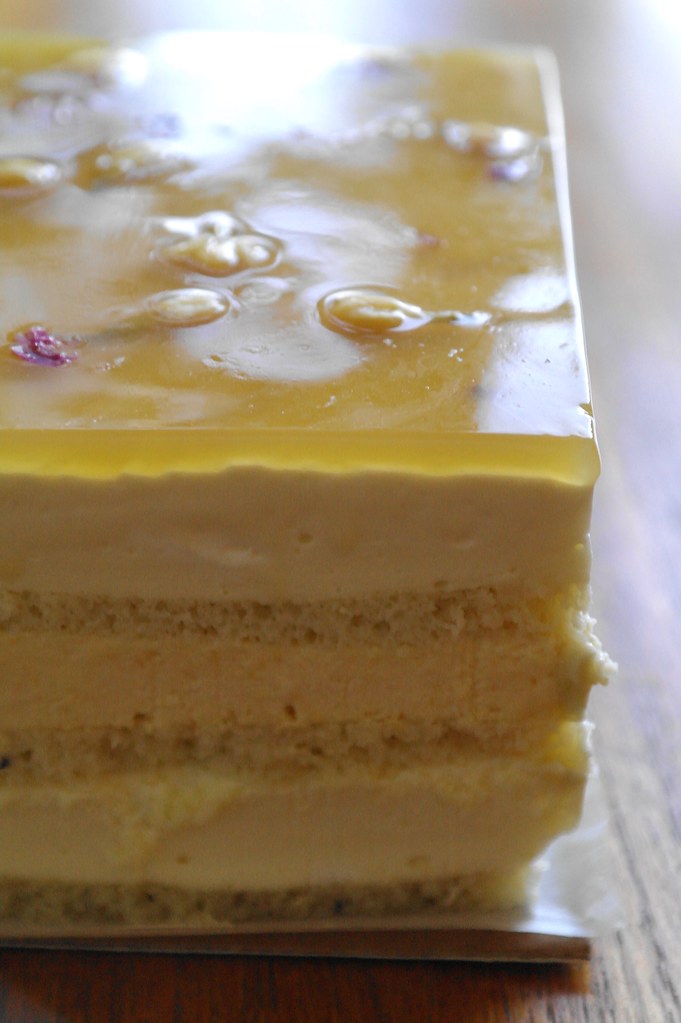 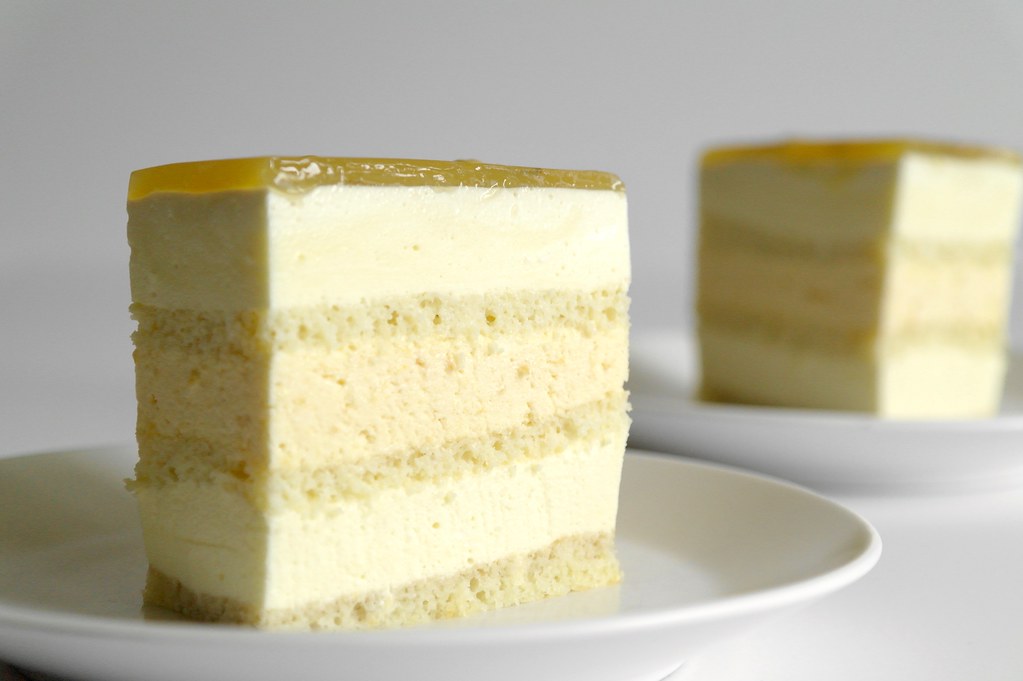 General concept adapted from Tartelette’s mango and coconut mousse cake. Makes 1 6x6x3″ or 15x15x8.5cm cake. I used a cake pan with the aforementioned dimensions. Serves many – cut into small pieces.

First, bake the joconde. Allow to cool, and then use the 6″ square cake pan to trace out 4 squares from the cake. Err on cutting the squares of cake generously – you can always trim them if they’re too big. Check how the squares fit in the pan and select the three that fit the best. Set aside.

Prepare the syrup and mousses.

To assemble, line the bottom of the cake with parchment paper. I was using a pan with a removable bottom, but if your pan does not disassemble, perhaps line the cake pan fully with parchment to allow removal later.

Once set, prepare the jelly. Allow it to come to room temperature and gently spoon overtop of the mousse. Place in the fridge to fully set.

Warm the outside of the pan with a blowdrier. Push up the removable bottom to unmold onto a plate or cutting board. Run a knife under hot water and dry it before making every slice. Trim the edges to reveal the layers clearly (also in case they’ve picked up some metallic taste from the pan), then slice into pieces.

Preheat the oven to 425F. To bake the cake as a 33x33cm square, I used a 3/4 sheet pan (may need to use a couple pans if using a 1/2 sheet pan in order to have a shape that one can cut 3 6″ squares from). Line the pan with parchment paper – and greasing the pan underneath the paper with butter might help prevent the paper from sliding when spreading out the cake batter.

Place the 3 egg whites in the bowl of a stand mixer and whip until frothy. Sprinkle in the sugar and beat until stiff peaks are formed. Transfer to another bowl and set aside.

Place the almond, icing sugar and 3 whole eggs in the stand mixer and beat with the whisk for 5 minutes or until light and fluffy (I don’t think mine actually doubled in volume, but the final cake seemed fine despite that). Sift the flour overtop and fold in. Fold in the melted butter.

Dollop a large scoop of egg whites over top and fold in to lighten. Dollop in the remaining egg whites and fold until incorporated.

Pour the batter into the prepared pan and spread out with an offset spatula – I spread it into a square around 33x33cm, but the cake could be spread into a larger size.

Bake for around 5 minutes or until golden and springy. I baked mine for closer to 10 minutes, but perhaps because the oven was being rather finicky and the temperature was low.

Prepare the tea according to the package instructions. Measure out 60g (reserve the remainder – some will be used for the jelly topping) and dissolve in the sugar. Stir in the rum.

3 egg yolks (use the ones leftover from the joconde!)

Cut the lemongrass into short lengths, and then cut lengthwise in half. To help get the flavour out, I curl the lemongrass pieces to bruise them. Crack the cardamom pods.

Heat the milk until steaming, add the lemongrass and cardamom. Cover and let sit for a couple hours to infuse. It can also sit overnight (if overnight, place in the fridge once cooled to room temperature).

Strain out the lemongrass and cardamom, pressing to extract as much milk as possible. Whisk together the egg yolks and sugar. Heat the milk in a saucepan until steaming and then gradually whisk into the egg yolks to temper. Transfer back to the saucepan and cook gently on medium-low heat, stirring constantly with a rubber spatula – only allow the custard to steam, but not to bubble or boil. Continue cooking until the custard is thick enough to coat the back of a spoon and hold a line drawn in it, 5 minutes. If there are any lumps, strain into a bowl.

Bloom the gelatin in the 3-4 tbsp cold water. Microwave to melt (only around 10-15 seconds), then stir into the warm custard. Allow to cool to room temperature.

Once cooled, whip the cream until it forms soft peaks. Dollop in around a third of the cream and incorporate with a wire whisk until smooth to lighten the custard. Add the remaining cream and fold in gently with a rubber spatula. Try to use within an hour.

Bring a pot of water to boil. Boil the peaches briefly, for around 20 seconds, then transfer to a bowl of ice water. Once cool, peel, cut into pieces, weigh out around 150g of peach and puree. Measure out 120g of peach puree. This can be set aside in the fridge until you’re ready to prepare the mousse.

For the mousse, warm the peach puree with the sugar. Bloom the gelatin over 2-3 tbsp of cold water and microwave briefly (5-10 seconds should do it, depending on the microwave) to melt the gelatin. Stir into the warm peach puree. Allow to cool to room temperature.

Once cooled, whip the cream until soft peaks form. Dollop a third over the peach puree and whisk in with a wire whisk to lighten, then fold into the remaining cream with a spatula. Try to use within an hour.

Measure out 90g of the reserved lemongrass tea (see syrup recipe above). Dissolve in 1/2 tbsp of sugar. Sprinkle the gelatin overtop the cold/room temperature tea and allow to bloom. Microwave until the gelatin is dissolved. Cool to room temperature before using.