flaky pastries filled with swiss chard and herbs – and the addition of allspice which seems to do wonders in making the pastries taste like more than a wad of chard. 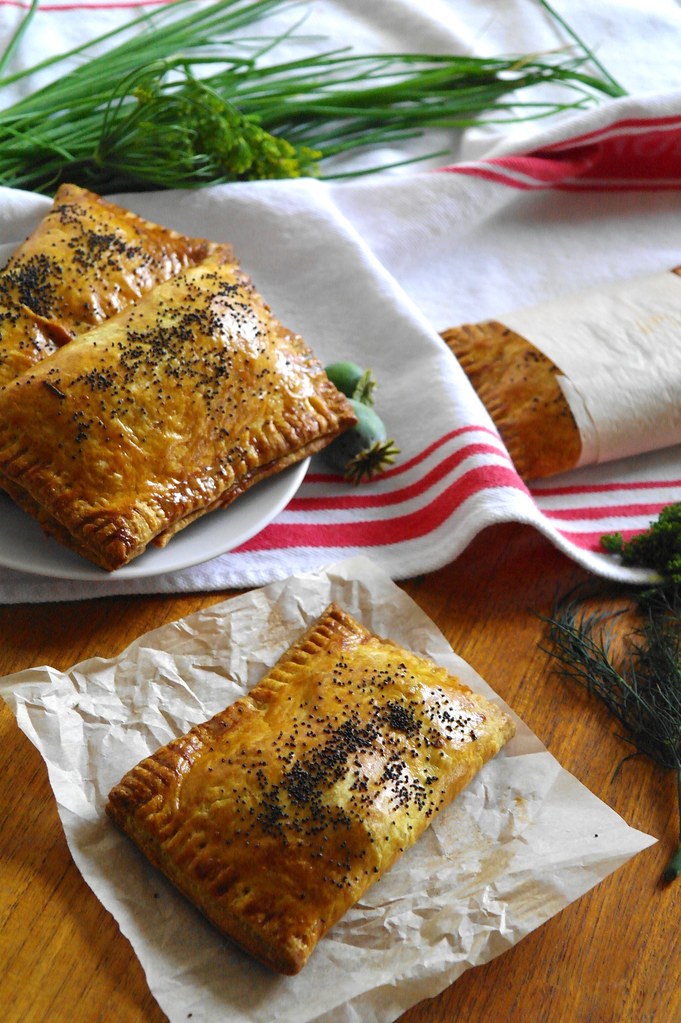 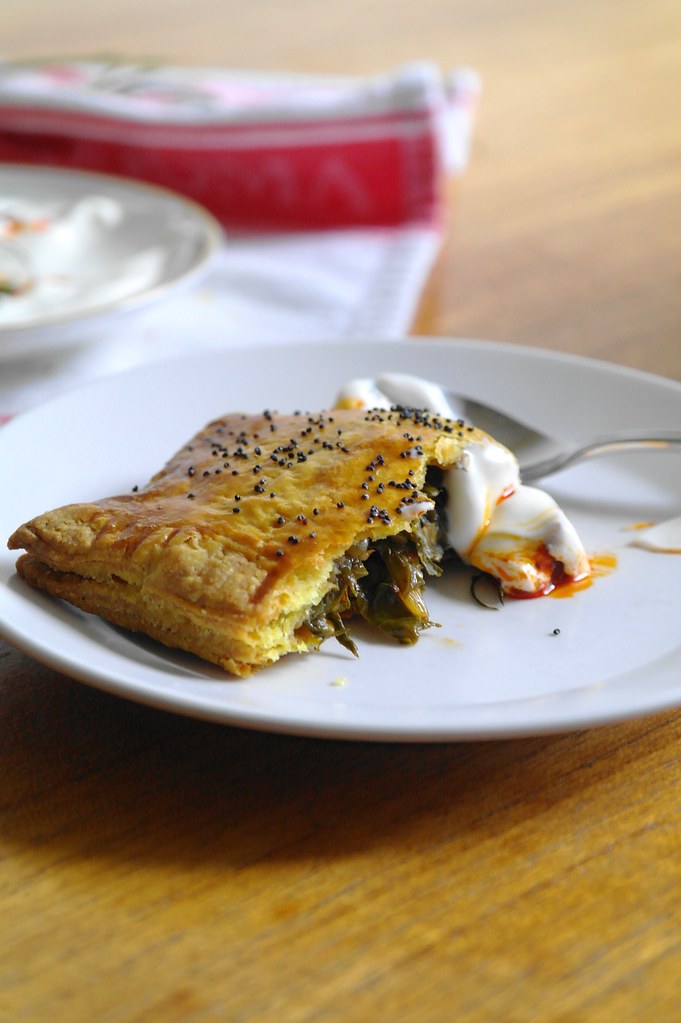 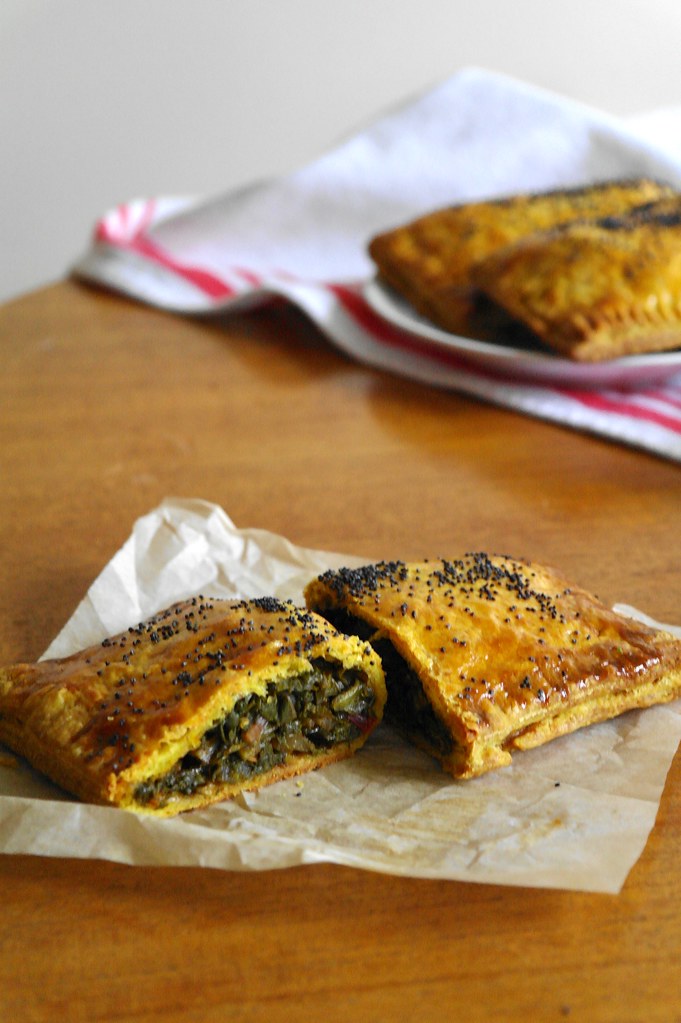 The problem of making pastries when you have a great deal of aging chard to consume is that generally you’re increasing the final mass – from what could be a manageable pile of boiled chard, water squeezed out and compressed into a block, sliced and served in no more than 15 large swallows – to potential piles of pastries. Though admittedly, pastries can be given away and shared, as they may hold more appeal than a compacted slice of boiled chard leaves. (Perhaps we can salt the boiled chard actually – after all, that surely adds no more than a few pinches of mass.)

To circumvent the issue of piled plates of potential pastries appearing, you can make some very large pastries so that surface area (i.e. pastry) to volume (i.e. filling) ratio is reduced. And you can compact the filling down as well. And suddenly, a bagful of chard that would surely last a couple of dinners, surprisingly seems like less and fits quite neatly into four well-filled pastries. 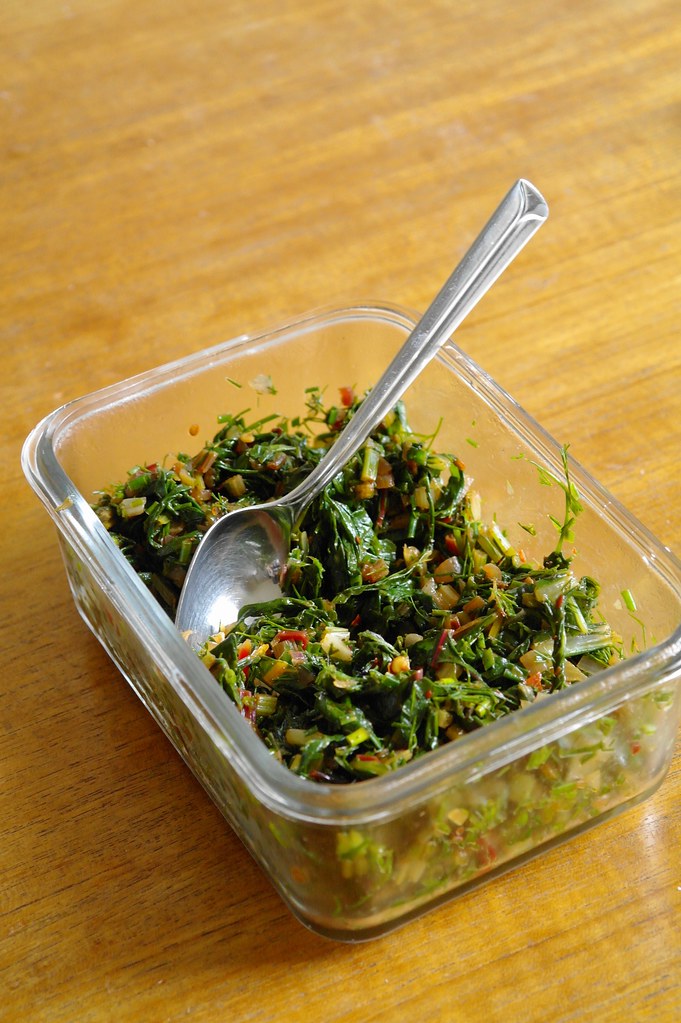 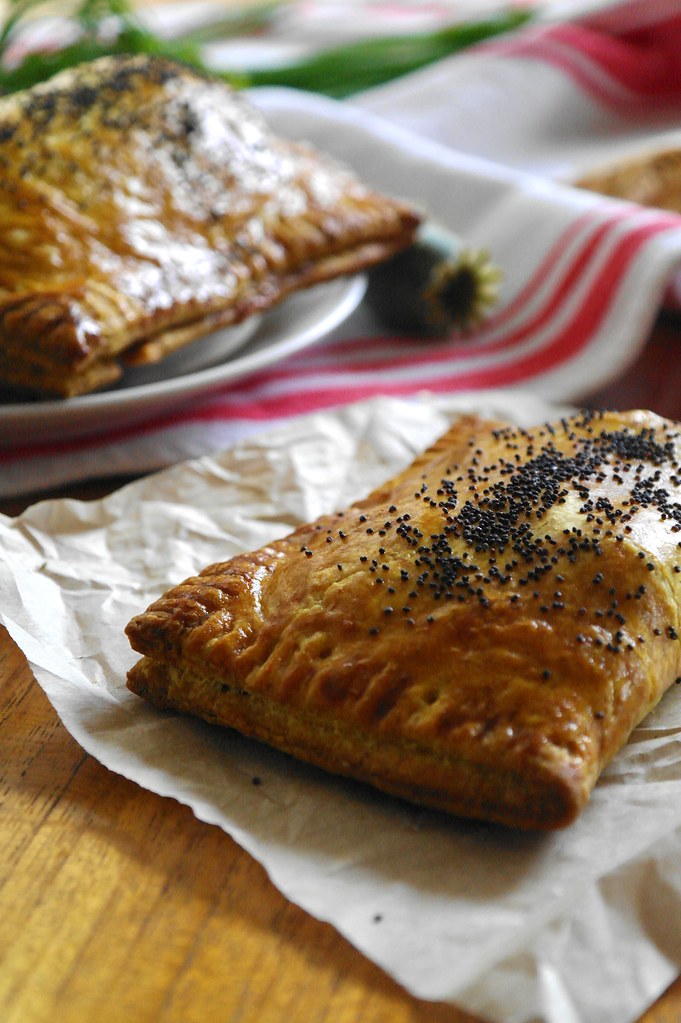 A packed solid chard filling does not sound immediately appealing to me, though its more to do with the fact that I’m currently used to having regular dinners of packed solid chard. Consequently, there is an additional mass of bright herbs (chives and dill) as well as shallots for flavour. It still wasn’t really enough to make the chard block taste more exciting than a chard block. I so very much wanted to add feta. But then I so very much resisted adding feta because I do so very much tend to do that. Too often. Feta can be such a crutch.

Then I thought of tabbouleh and its companion allspice; I tried adding some allspice, and then some more, pleasantly surprised how it made such a difference in the filling, exciting what was otherwise a bit of a monotonous vegetal taste.

The pastry dough is the perfect time to bring out the word wondrous from long-term storage, because it is a wondrous pastry, barely adapted from the bureka dough #4 in Honey & Co.’s Golden. Due to the cream cheese and a fair amount of cream, it remains softer when chilled, making it flexible and easy to work with, quite the virtue when enclosing filling. It cooks up flaky and puffed, and all the cream cheese on top of heavy cream on top of butter on top of a good pinch of salt means that it tastes appetizing on its own – the corners of pastries are one of the best parts.

The pastry and filling are both best eaten with plenty of cold yoghurt, drizzled with some more harissa if you’d like it a bit spicy. The pastries also reheat well in the oven on subsequent days. 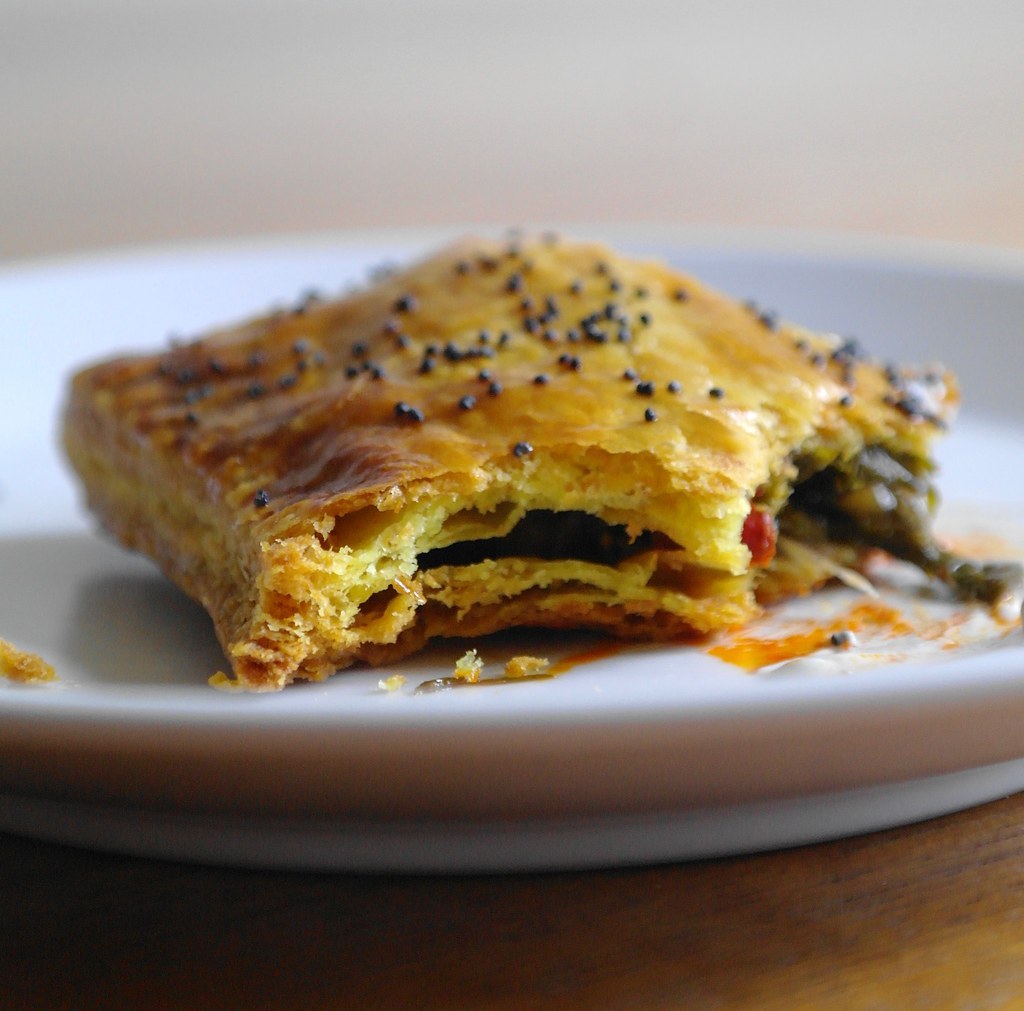 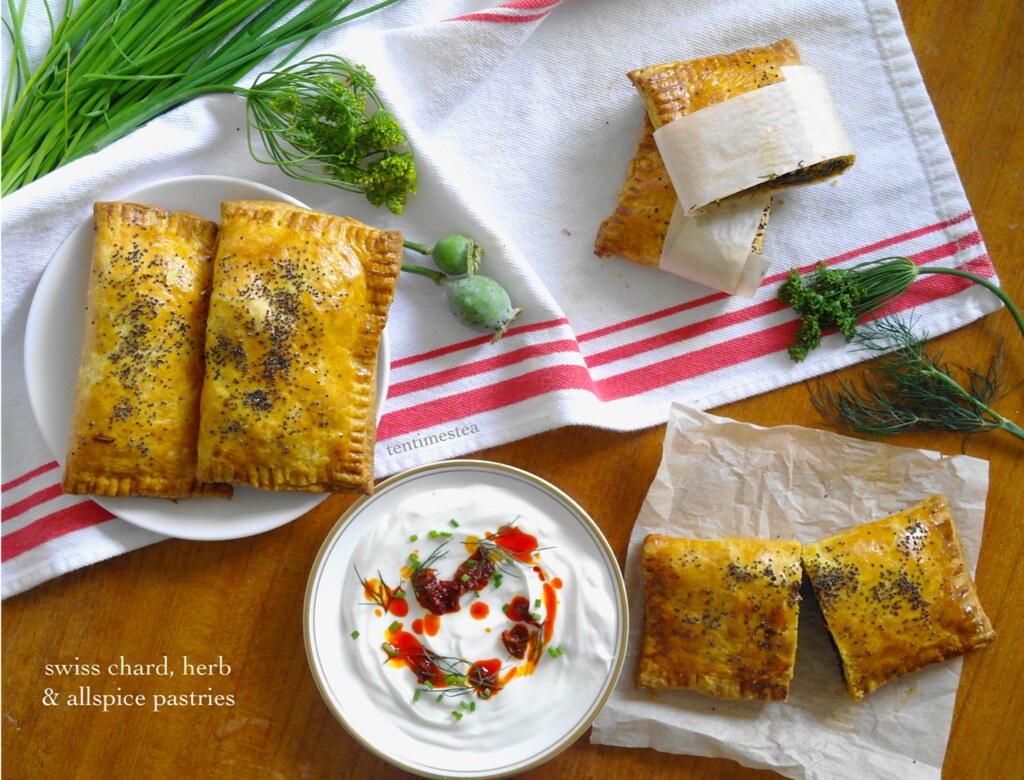 In the bowl of a food processor, combine the flours, baking powder, turmeric and salt. Add the butter and cream cheese and pulse until in pea sized pieces. Pour the egg and heavy cream on top and process until a nice soft dough is just formed. Wrap in plastic and chill.

salt to taste (around 1 generous 1/4 tsp kosher salt; amount may vary depending on the harissa)

Cut the stems from the chard and cut into small pieces. Chop the leaves more coarsely. Finely chop the shallots. Heat some olive oil in a pan over medium high heat, add the shallots and chard stems. Cook until stems are tender and shallots are translucent.

Add the rose harissa and cook briefly, then add the chard leaves, cooking until wilted. Add salt to taste and remove from the heat.

Finely chop the chives and dill. Stir in along with black pepper and allspice. Squeeze lemon overtop to taste – I used a wedge that was around 1/8th of a lemon.

Arrange the squares of pastry on a parchment lined tray. Each pastry can be filled with around 1/4 cup of filling, packed down into the cup. As the pastries are rectangular shaped, it’s easier to pack them if the filling is arranged into a rectangular shape as well to fill the corners. Leave a clear 1 to 1.5cm border around the filling and dab with a little bit of water to help seal. Fold the pastry dough in half, bringing the two shorter edges of the pastry together and thus bisecting the longer edge of the pastry. Press with a fork to help seal.

Brush with a bit of beaten egg. Sprinkle with poppy seeds. Bake for around 20 minutes or until the pastry is deeply golden and puffed. Let cool on a wire rack.

Eat with yoghurt, drizzled with a bit more harissa if desired.

One thought on “swiss chard, herb and allspice pastries”