more ways to consume the end-of-season deluge of swiss chard, this time some packed feta, herb and swiss chard phyllo pies. plus, waxing poetic on the wonders of phyllo 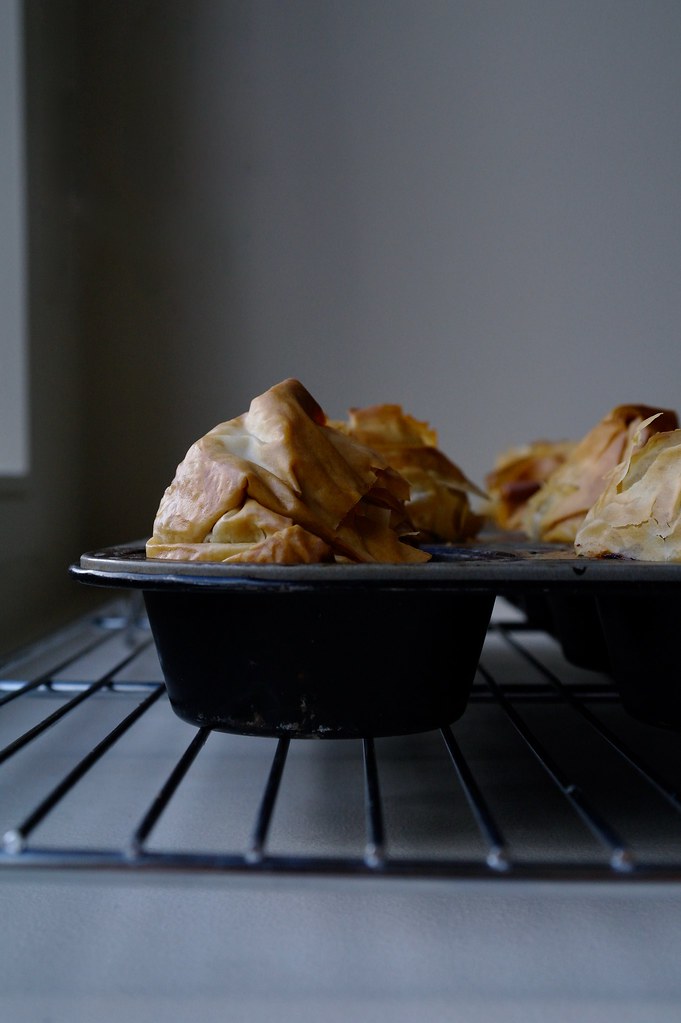 Perhaps you too have had a massive end-of-the-season influx of Swiss chard, and perhaps there was also this 2-for-1 deal for frozen phyllo pastry that caught your eye. And as well, it is certainly possible there was also a conveniently-timed get together coming up which probably entails bringing some food or another. In such a situation, this would be a helpful recipe. 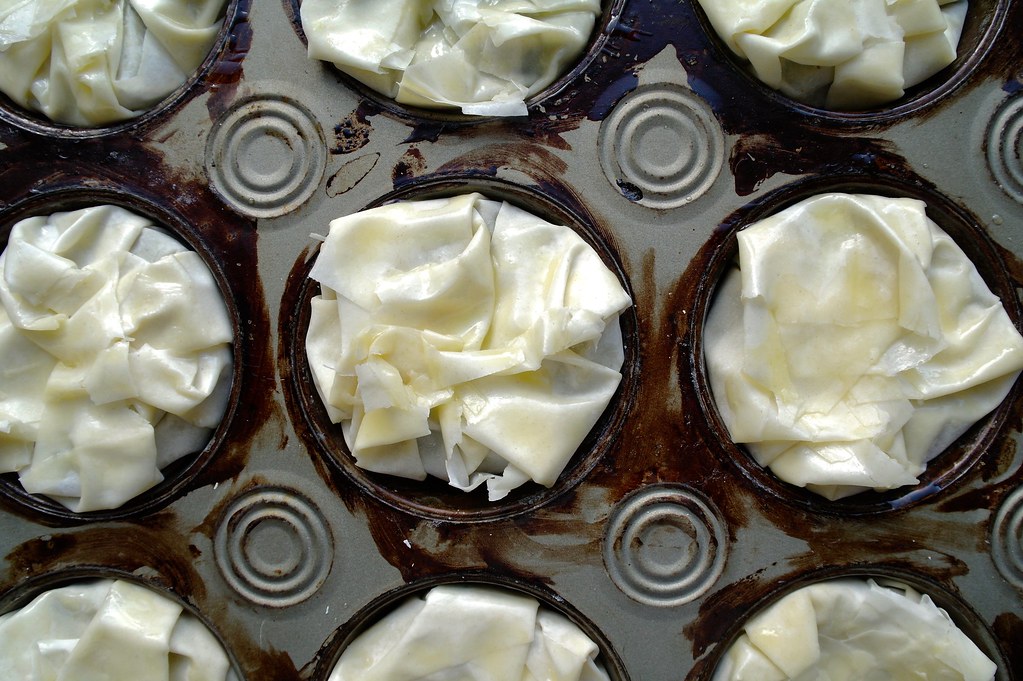 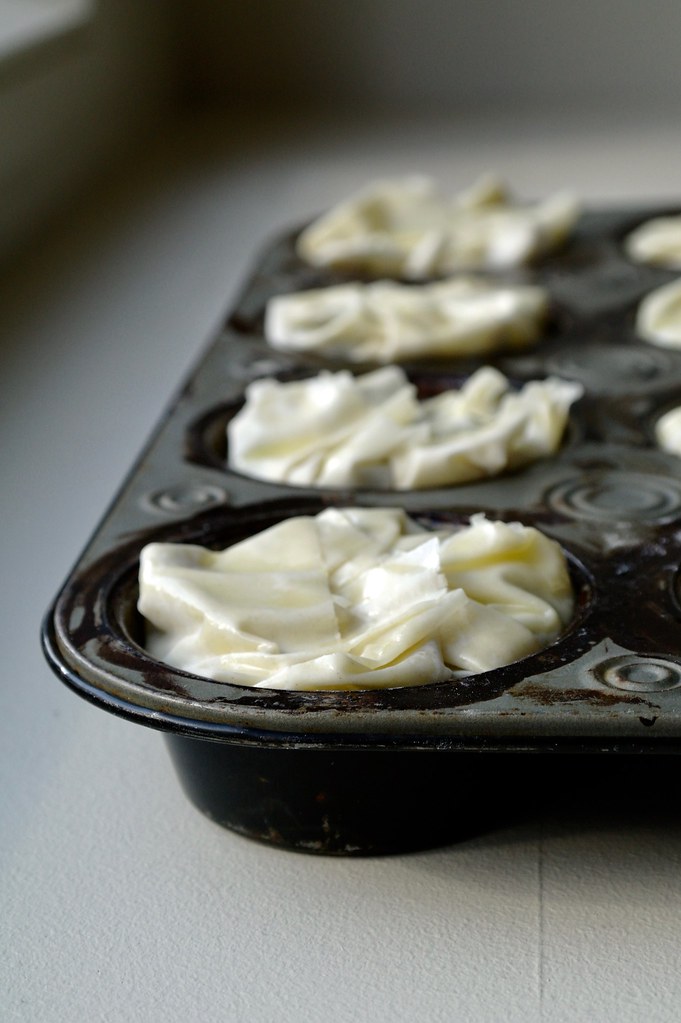 In the past I, secretly, looked down a bit on phyllo as opposed to pie pastry or puff pastry. I would look at it: unappetizingly anemic, sitting there in that cardboard box and plastic wrapper. It seemed like a terrible excuse for a pastry – just a thin sheet of bland and completely unbuttery flour. Obviously, I fundamentally misunderstood phyllo. And I continue to fundamentally misunderstand phyllo along with many other foods. I will never be an authority on the matter (luckily I do not have an authoritative or far-reaching voice, blog-wise, so I think there should not be too much worry about my vague phyllo ramblings displacing the work and thoughts of those who genuinely are phyllo experts and authorities and really truly passionate about phyllo and now that I am on this topic, this goes for everything I write about anything.) (I will put this statement somewhere.) (And an appropriate step could be linking to other voices on these topics to promote sharing their voices as opposed to just mine!)

But instead I can work on gradually learning more as I go along.

And this is what I have learned: you cannot hold the unbuttered state of phyllo against it–instead of coming prebuttered as some other pastries tend to, you pack in the oil or butter (and lots of it!) later. And, like many pastries, phyllo really comes into itself (insofar as storebought phyllo can – I don’t know at all, but I would expect the consensus is that it will never reach the heights of freshly made phyllo) when it hits the oven and suddenly those thin leaves go crisp and browned and papery and fragment into shards. 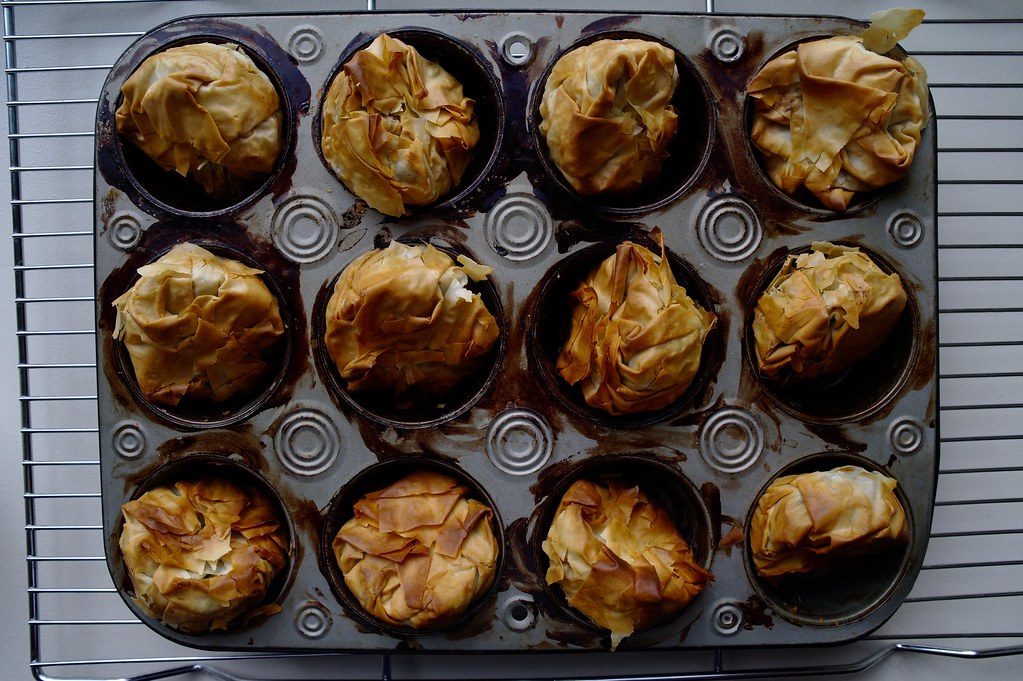 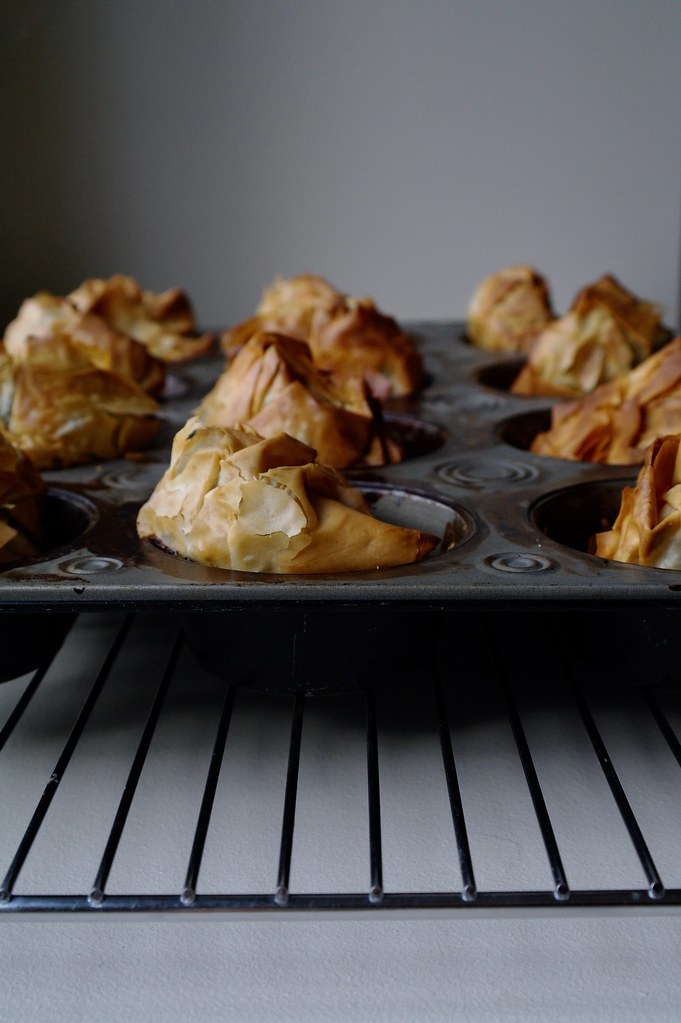 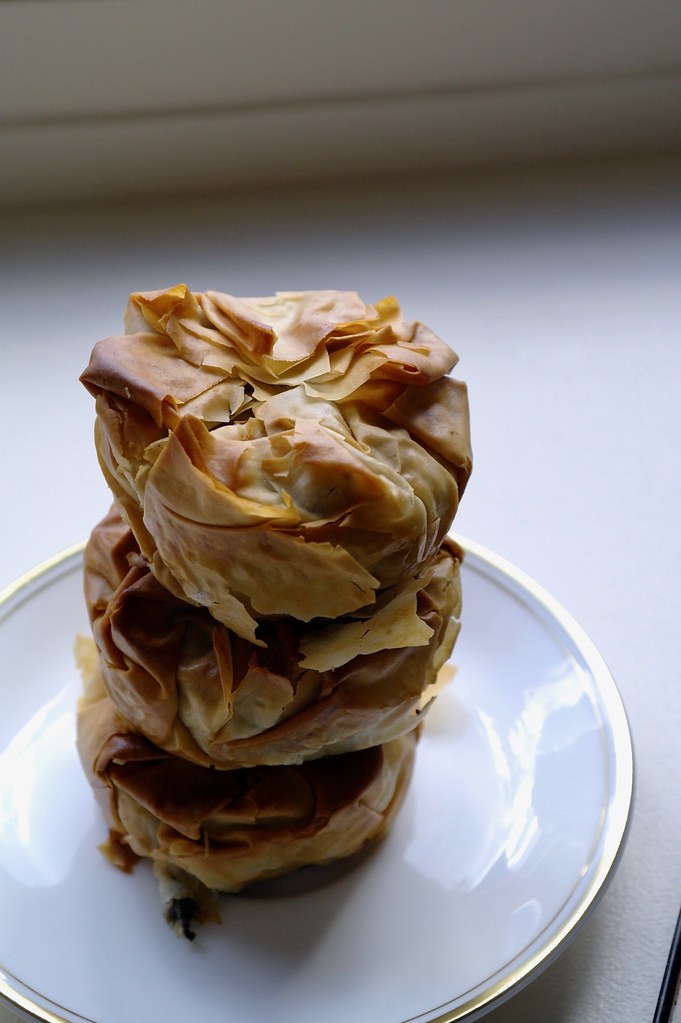 My best phyllo memory is undoubtedly at a borek stall in a market in London (Ontario, that is) where two men took a small ball of supple dough and proceeded to stretch it over a wide oiled table in a layer so thin as to be the most translucent window pane test one could ever dream of (you and me both, Peter Reinhart, you and me both).

And so that, I think, is phyllo. It’s not always exactly the frozen sort I am used to with stiff, flimsy leaves. From start to finish, this phyllo was beautifully lively and dynamic. It’s not a that needed to be shoved firmly on the crisp side of the divide, or otherwise face the danger of being unbearable soggy. Instead, it was strong enough to be in layers that were soft and doughy inside.

Thinking of that phyllo leaves (haha..ha..ha. it was a pun) a lot to be desired here. But maybe that’s for another day. Because, say you’re looking for a helpful recipe to deal with your influx of Swiss chard and cheap frozen phyllo supermarket deals and there are surely a lot of people to feed at a garden meet up soon… 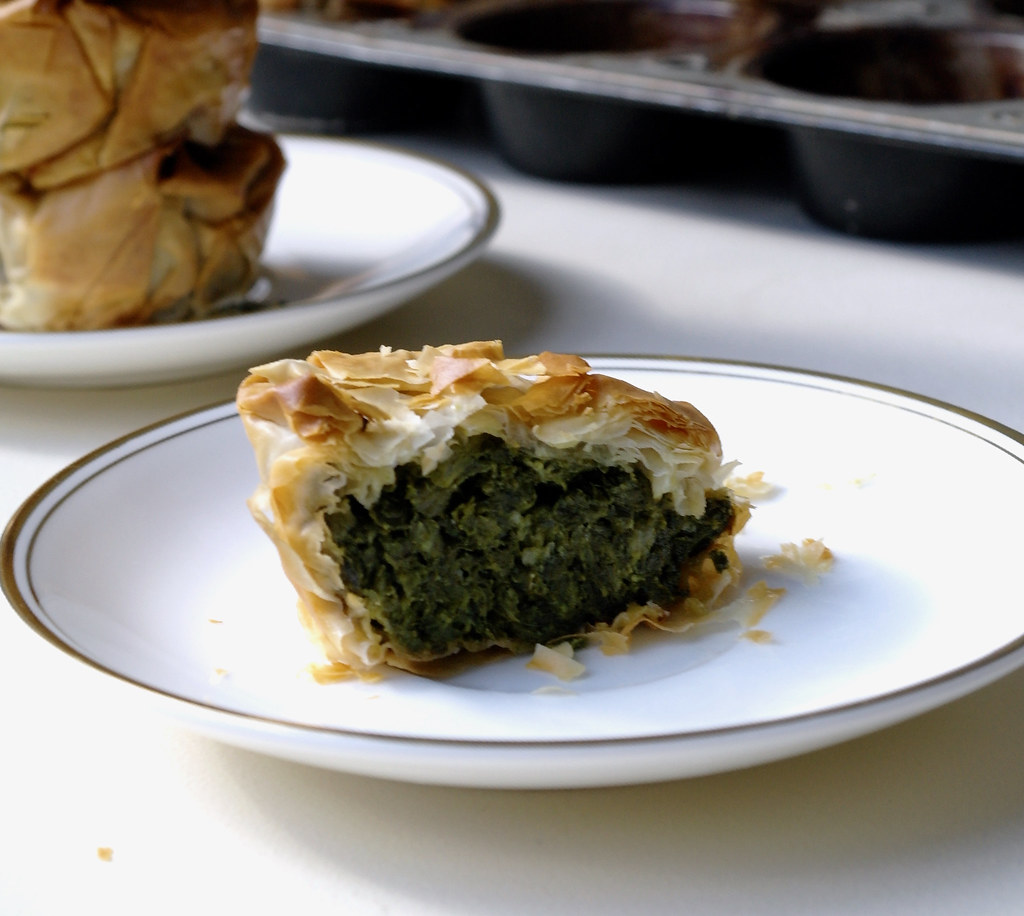 It is worth noting that different shapes could be chosen depending on the variable that one wants to maximize–use of filling or use of pastry. This sort of puck-shaped pie is quite efficient in packing the filling (while still retaining plenty of flaky pastry ruffles), but a smaller rolled triangle shape or even a smaller tin could use up more phyllo instead.

And, while we’re on the topic of phyllo and boreks, I’d also like to point you towards: childhood memories and this potato and onion borek from My Dear Kitchen in Helsinki and a beautiful photo story of making boreks with family from Aylin Ahmet.

Adapted from here. I would increase the feta.

1 1/2 lb Swiss chard, chopped (the stems chopped somewhat finely, but the leaves can be quite coarse)

Line the bottom of a 9″ round cake dish with parchment and oil the bottom and sides. Preheat oven to 350F.

Heat some olive oil in a pan, add the onions and garlic and cook until onions are softened. Add in the Swiss chard stems, cooking until the stems are softened, then add the leaves and cook until wilted. Mix in the herbs, remove from the heat and let cool. Mix in the cheese, nutmeg and eggs, transfer into the prepared pan and bake for around 40 minutes to 1 hour or until it has set up a bit and is puffed and slightly browned on top. Let cool completely and chill before using.

Lightly butter the cups of one and a half muffin tins (18 cups).

Depending on the proportions of your sheet of pastry, take the sheets of phyllo and cut each into 6 squares (sidelength around 4-5″). Cover.

Bake for around 30 minutes or until the pastry is well crisped and browned all over. Let cool for a few minutes so the pies can be handled before gently popping the pies out of the muffin tin (if there is any filling-leakage it might take a bit of jiggling with a butter knife) and letting cool completely on a wire rack. If they cool in the tins, they’ll get a bit soggy, so this is best to keep that crisp pastry all around.