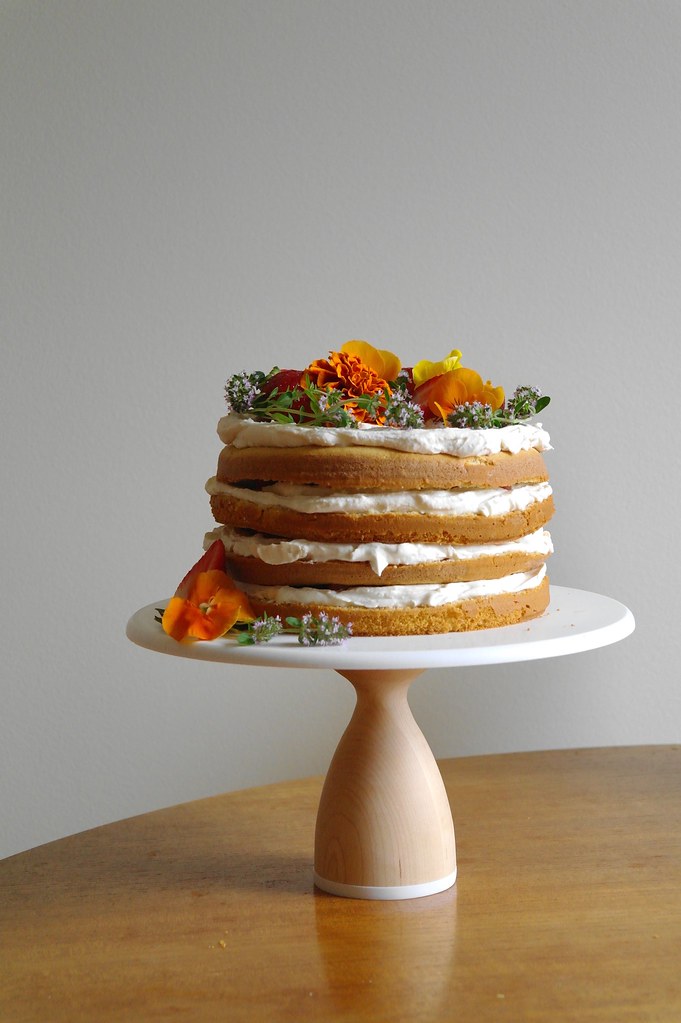 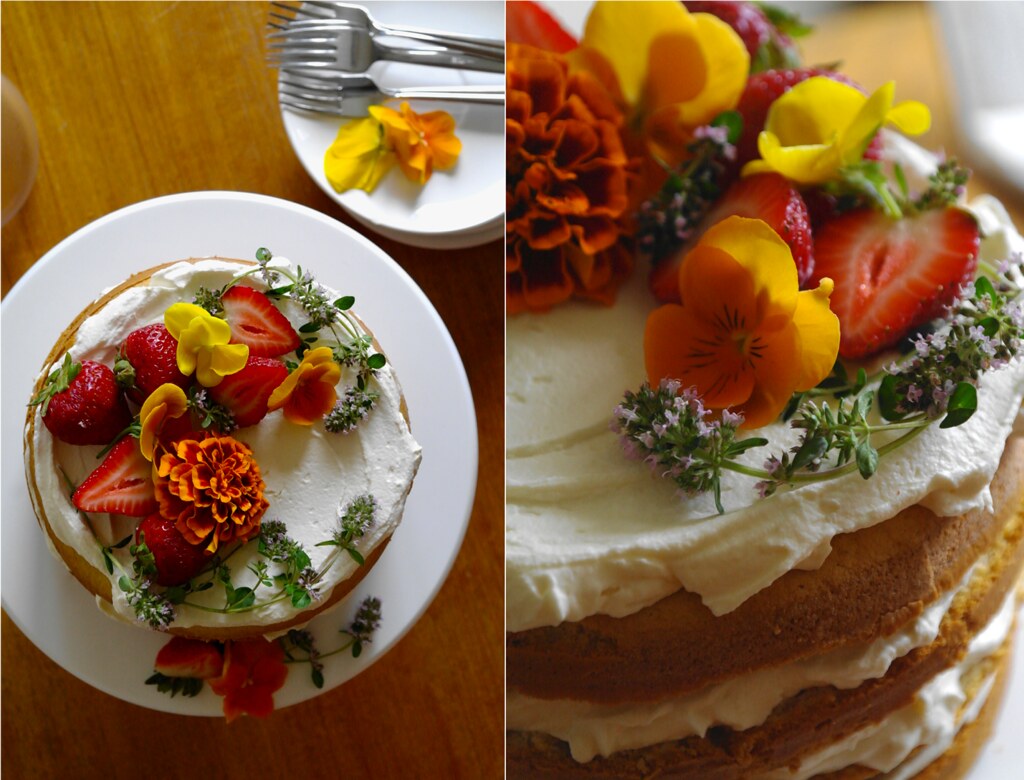 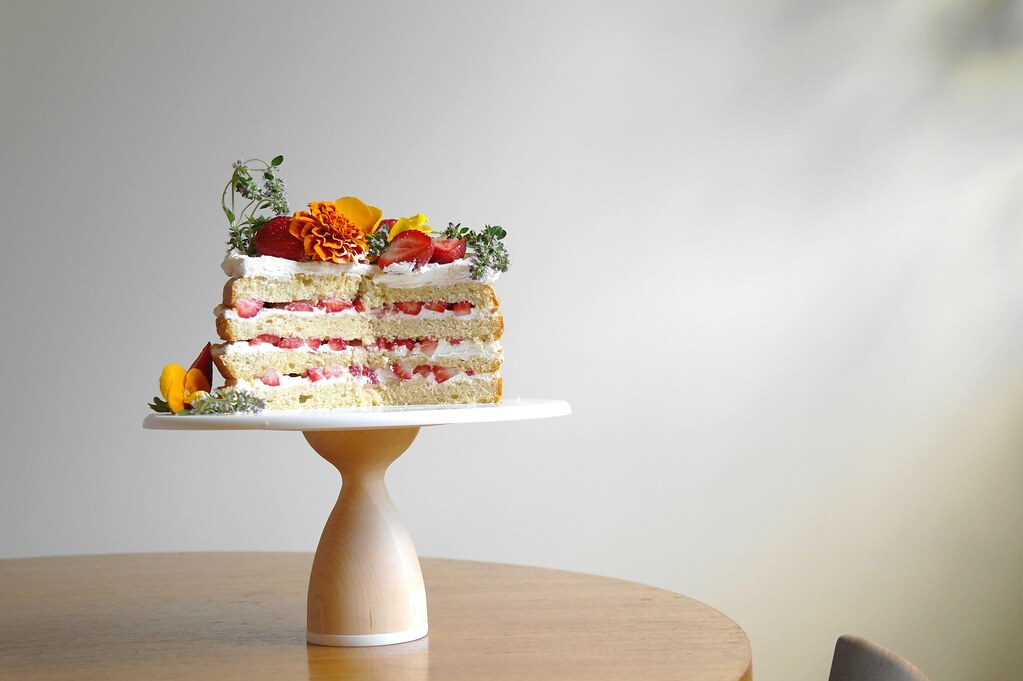 The transformation of browned butter is a heady aromatic experience: first of melted butter, like popcorn, then as it cooks and the solids break down a bit more, of all the good things fried in butter like eggs and pancakes and toasted bread, finishing on an intense concentration of toast and caramelization.

I find it comes out immensely in butter-heavy financiers and is a fair contributor to other cakes and cookies. Though as intense as brown butter is in its unadulterated form, sometimes I struggle to coax it to step beyond team player (which it is terribly wonderful at) to be a primary flavour. 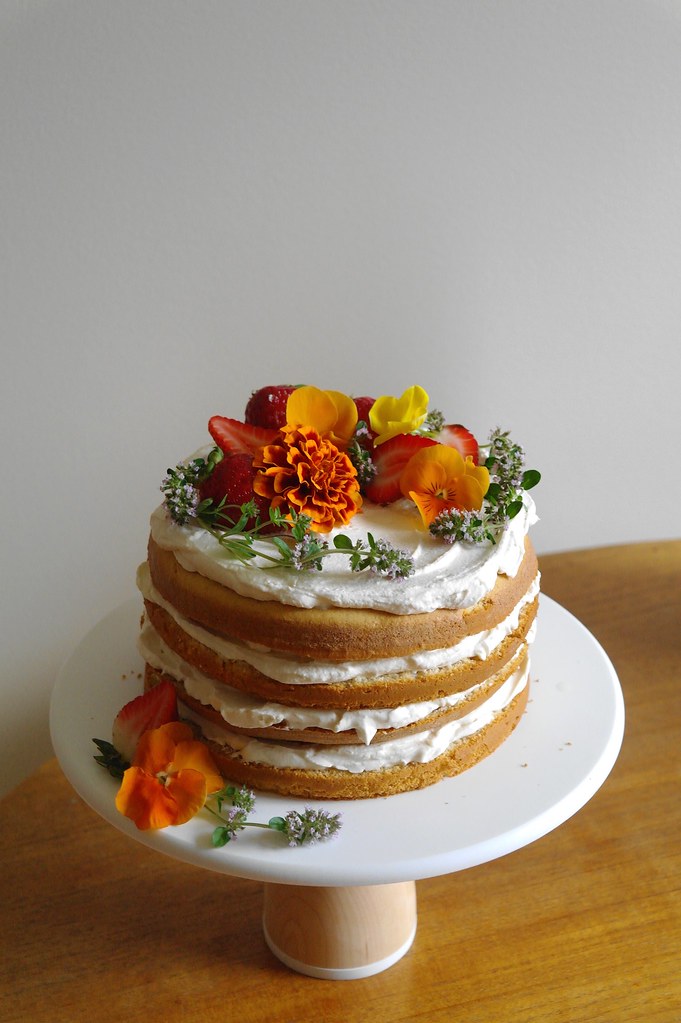 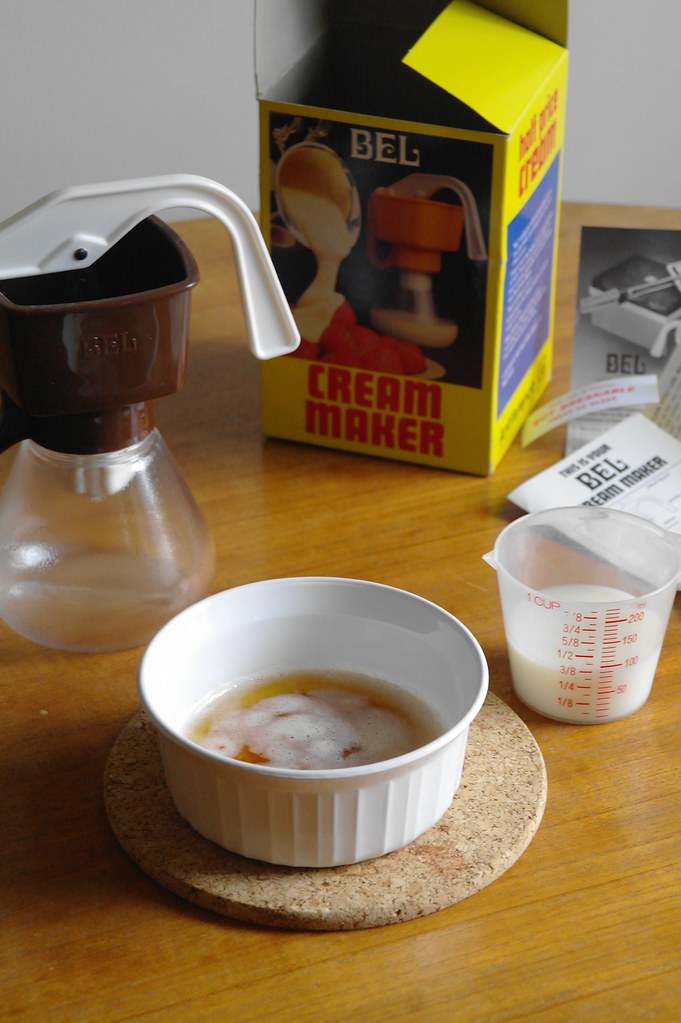 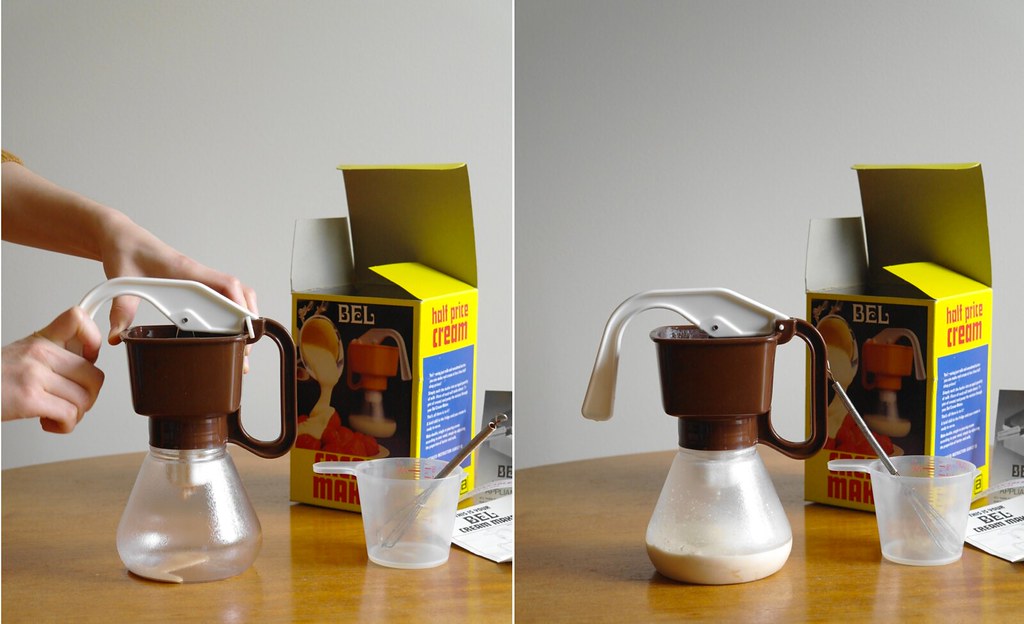 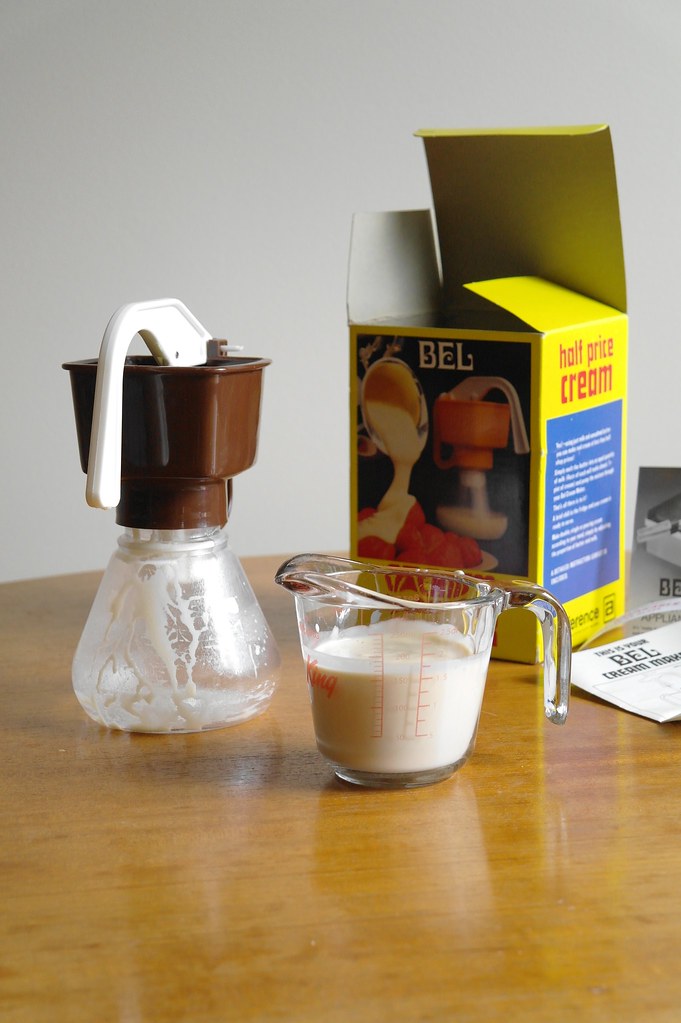 My mum purchased a Bel cream maker years ago in an effort to be more budget friendly in a time when cream was quite expensive. The device has a small hand pump to homogenize melted butter and milk from the upper chamber into a cream that drips into the underlying jug. When I came across it in a cupboard, this new methodology sparked some ideas – and the most immediately appealing was clearly browned butter.

To make the browned butter cream, I followed the guidelines in the booklet, apart from the substitution of browned butter. The cream came together quite easily – the only difficulty I noticed was the tendency of the melted butter to float towards the top of the cream maker while the access to the homogenization chamber was located at the bottom. I needed to give the initial mixture occasional stirs to try to maintain the butter mixed throughout – otherwise at the end I was almost left with only melted butter and no more milk with which to emulsify it.

The cream-maker’s recommended ratio for double cream was 1.25 butter to milk, which by my calculations (assuming butter = ~80% fat) produces a 45% cream (or 50% if we assume water loss from the browning process of the butter). I realize that I had conflated double cream with whipping cream by assuming I could tack my own understandings of cream categorization onto British cream lingo, so I was initially surprised by how rich and thick the resultant cream was. It’s very luscious, and the perfect thickness to pour over stewed fruit, though next time I may try to prepare a 36% cream instead as that will usually suit my purposes.

By my calculations, to get 36% cream:

(this does not account for the loss of water from the browning process…estimated as 17% of the butter–in which case we want a ratio of 0.7) 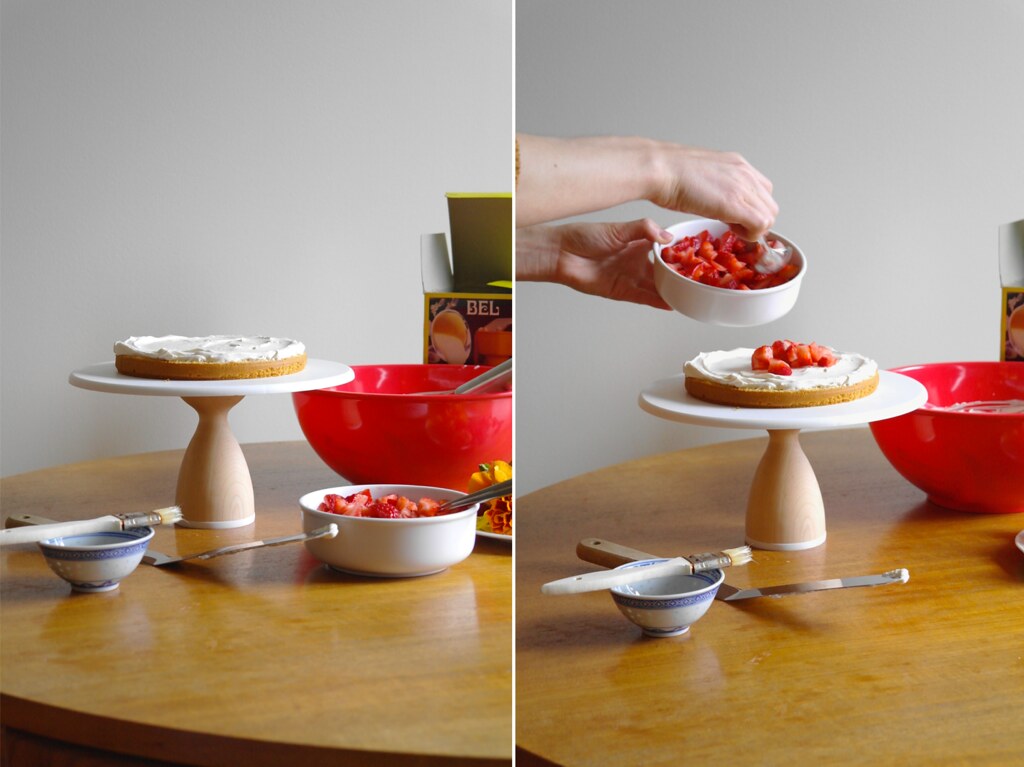 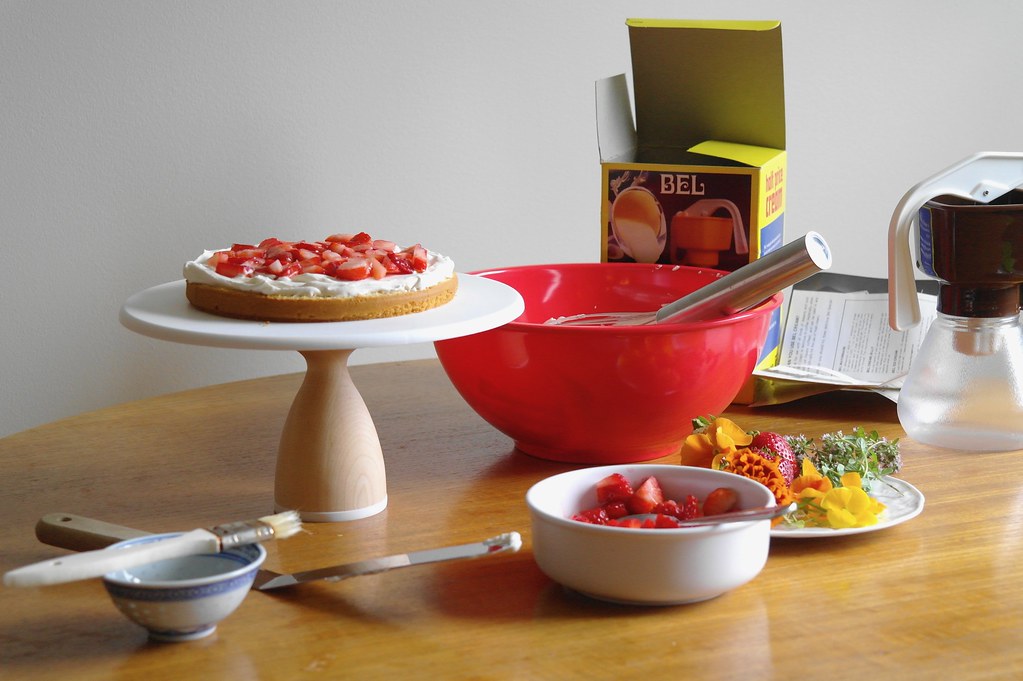 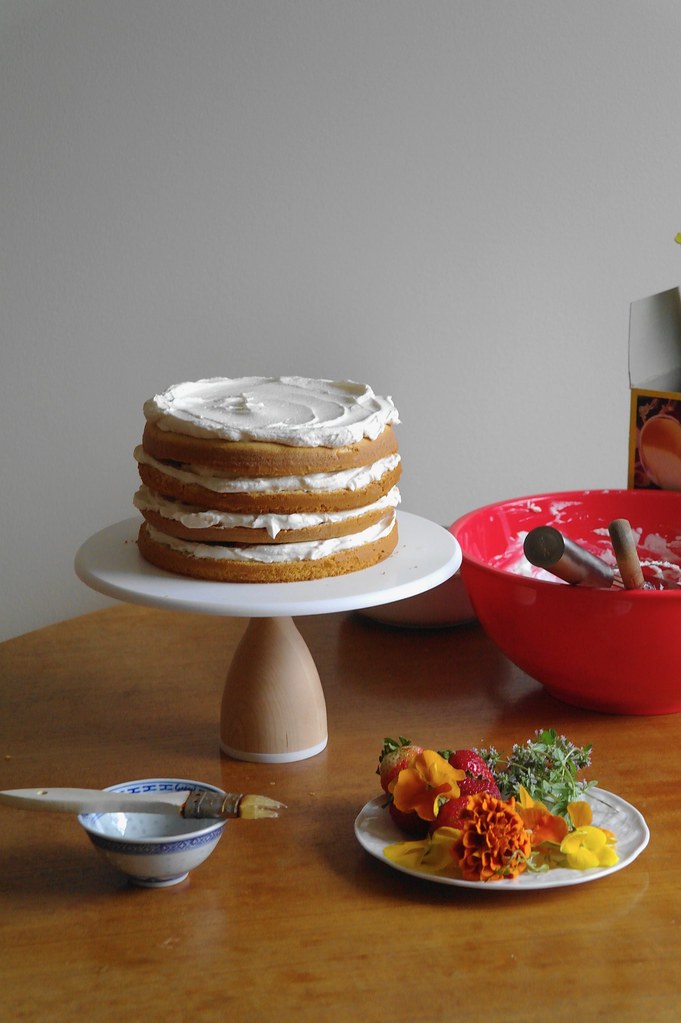 Once you have the browned butter cream, it’s just as easy to whip up as usual cream. It’s quite potent, so I cut it with some regular whipping cream. I did find that the whipped cream didn’t stay as smooth, likely because the homogenization on this cream is not quite as good as industrial homogenization!

The cake itself was kept simple to focus on the flavours of the browned butter cream. I was inspired by the sponges with elderflower cordial I always seem to see on UK blogs and added some elderflower flavouring in two ways, but apart from that, it’s straightforwards butter, fruit and cream.

The cream is a bit disconcerting–you taste what is most absolutely those toasty and nutty caramelized tones of browned butter, but it all comes from a soft, pale, light, and cold cream. It’s really lovely. 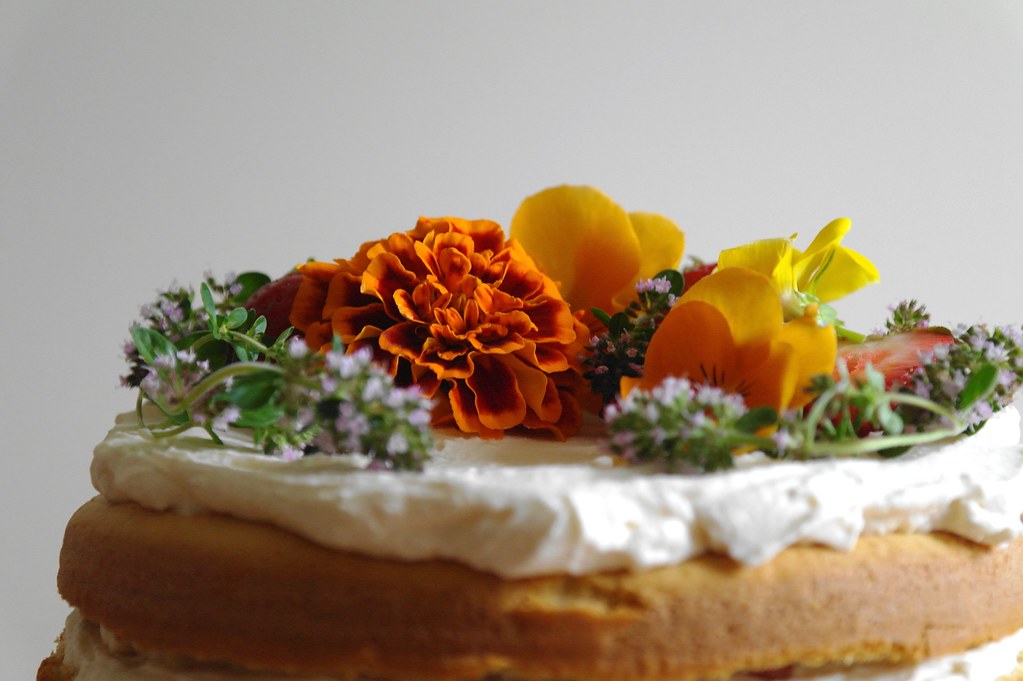 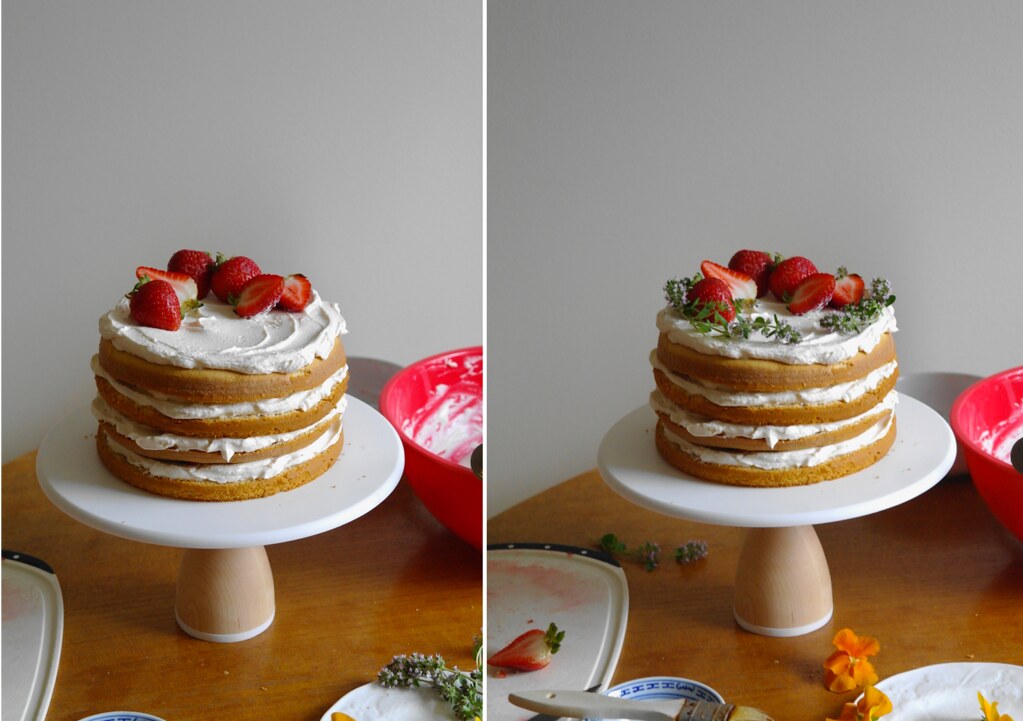 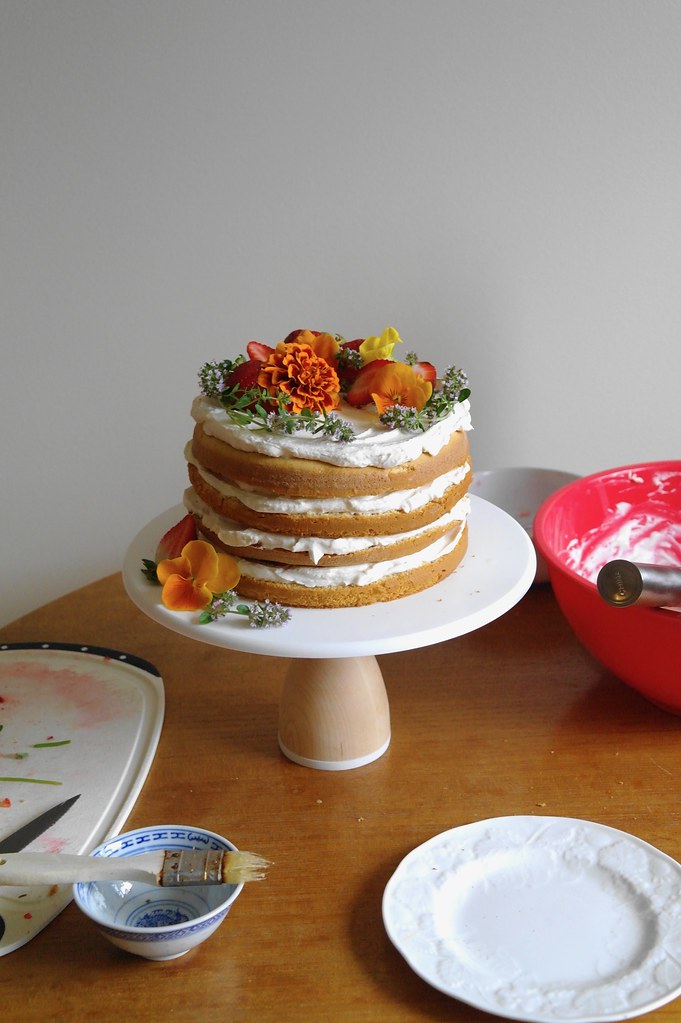 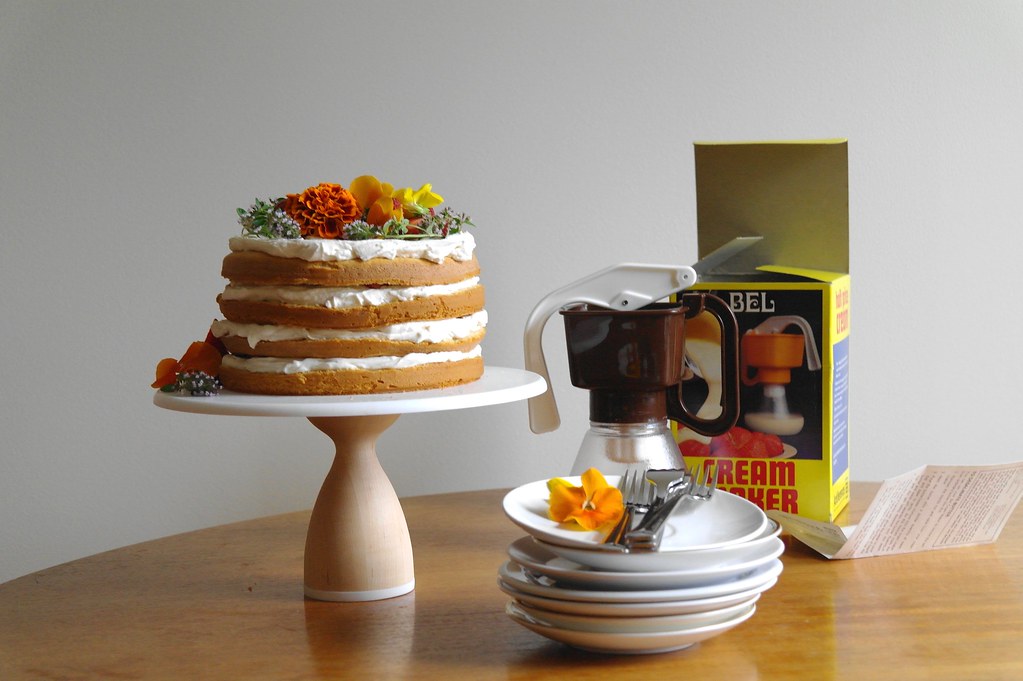 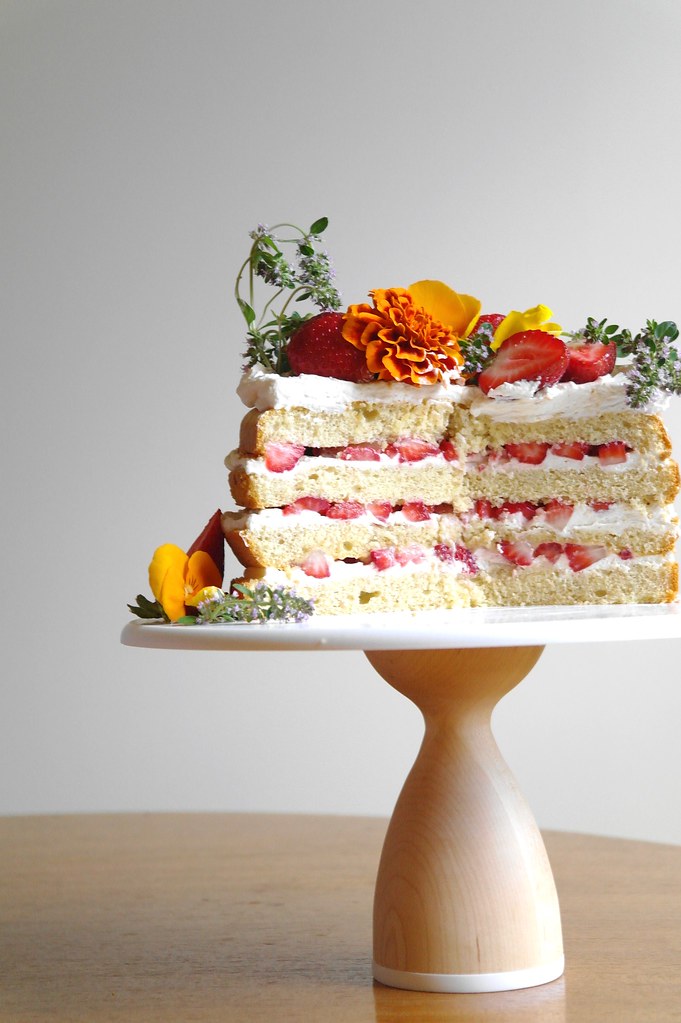 As much as I love the intense brown butter flavours of the cake, perhaps what I find most endearing about this project was being able to use my mum’s old, seemingly redundant (given the greater availability and affordability of cream now) appliance for something new.

It seems that it is possible to make cream from melted butter and milk without the use of a cream maker (see the first recipe here) – I’m not sure whether it holds as well, but it might be worth a try if you’d like to make your own browned butter cream without the cream-maker.

While this cake is on the summery-side, I can’t wait to see what else I can try with browned butter cream with a more autumnal portfolio of flavours! 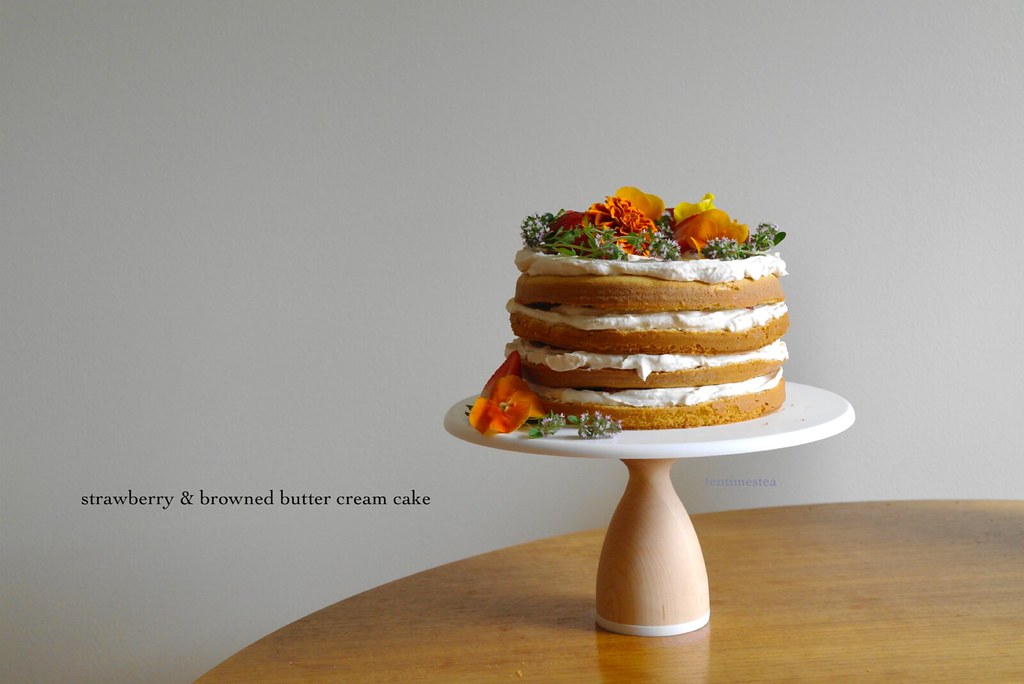 A simple one, mostly to show off the browned butter cream and contrast it with plenty of strawberries. A bit of elderflower flavour in the cake, and layers brushed with St. Germaine.

To make the cream, I followed along with the cream maker instructions, except I browned the butter first, then mixed it with the milk (ensure it is warm so that the butter remains liquid and can be passed through the homogenizer). From there, I used the cream maker to pump the liquid through some very small holes to homogenize it.

This is the ratio I’ve done so far, according to the Bel double cream recipe (I realized after that I don’t really know what double cream is). As I’ve discussed a bit above, I think next time I may try a 0.8 ratio of butter to milk instead of 1.25.

Makes two 7″/18cm cakes to be sliced in half for 4 layers total.

Preheat the oven to 325F. Line the bottom of two 7″/18cm springform pans with parchment paper. Butter and flour the sides of the tins (alternatively, and I would think likely for a better and more sustained lift, one could line the sides with parchment as well).

Place the egg whites in the bowl of a stand mixer and begin to beat with the whisk attachment until the egg whites are foamy. Slowly add in the sugar and whip until stiff peaks form.

Meanwhile, in a large bowl, whisk together the flour, the baking powder and salt. In another bowl, combine the egg yolks, elderflower drink concentrate, water, and vanilla extract.

Divide the batter between the two prepared pans. Tap lightly on the counter to level the batter and pop any large air bubbles. Bake for around 30 minutes or until an inserted skewer is removed clean. Let cool on a wire rack before unmolding.

Whip the creams with the sugar until stiff.

Slice the cakes in half. Lightly brush each layer of the cake with St. Germaine. Spread with 1/4 of the cream, making the edges taller so that the strawberries fit in the middle. Fill the centre with 1/3 of the chopped strawberries. Repeat with the remaining layers. For the top layer, cover with cream and arrange with strawberries, edible flowers, etc. (Keep in mind, marigolds are only vaguely edible in small quantities from what I hear–we did not eat the one on top).