ice cream infused with dill plus some cardamom to round it all out, along with lemon and dill pollen. an ice cream? a curiosity? 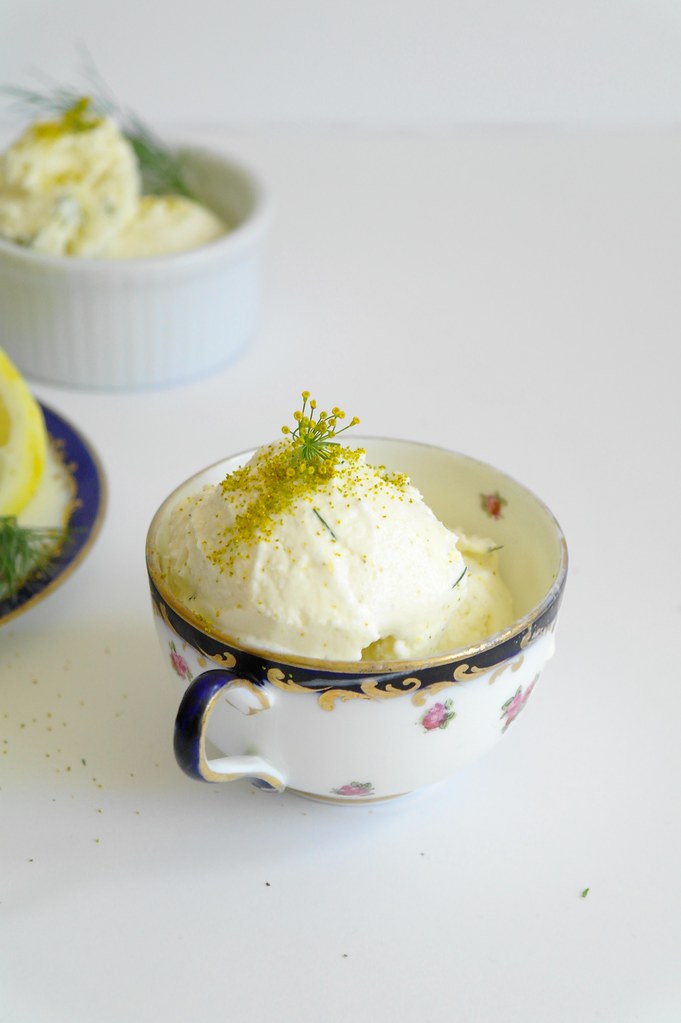 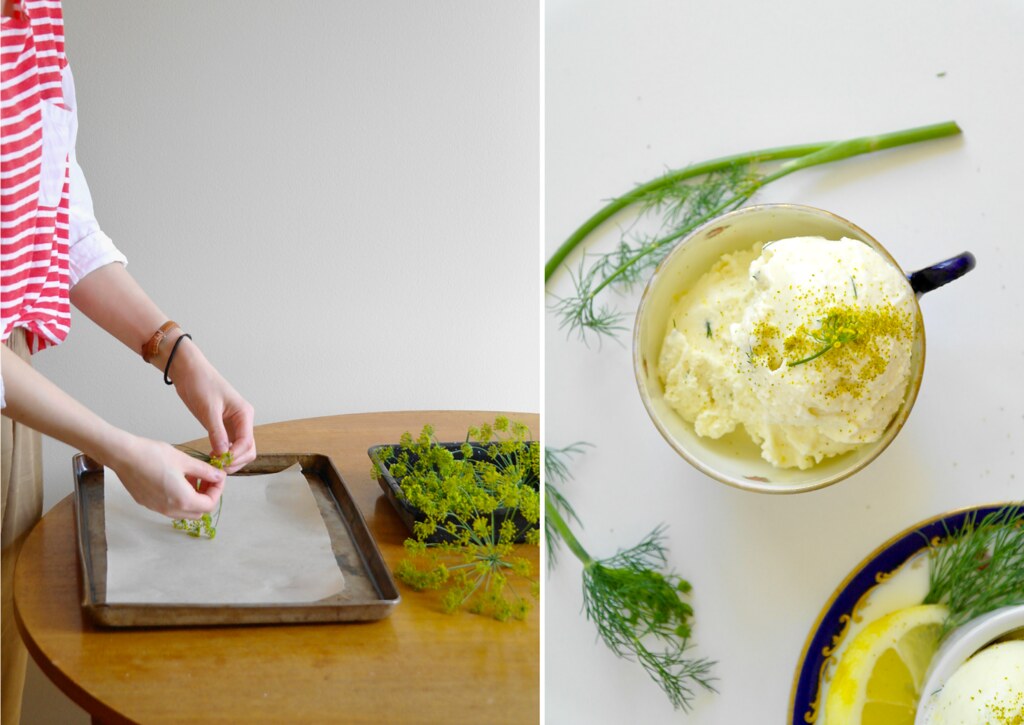 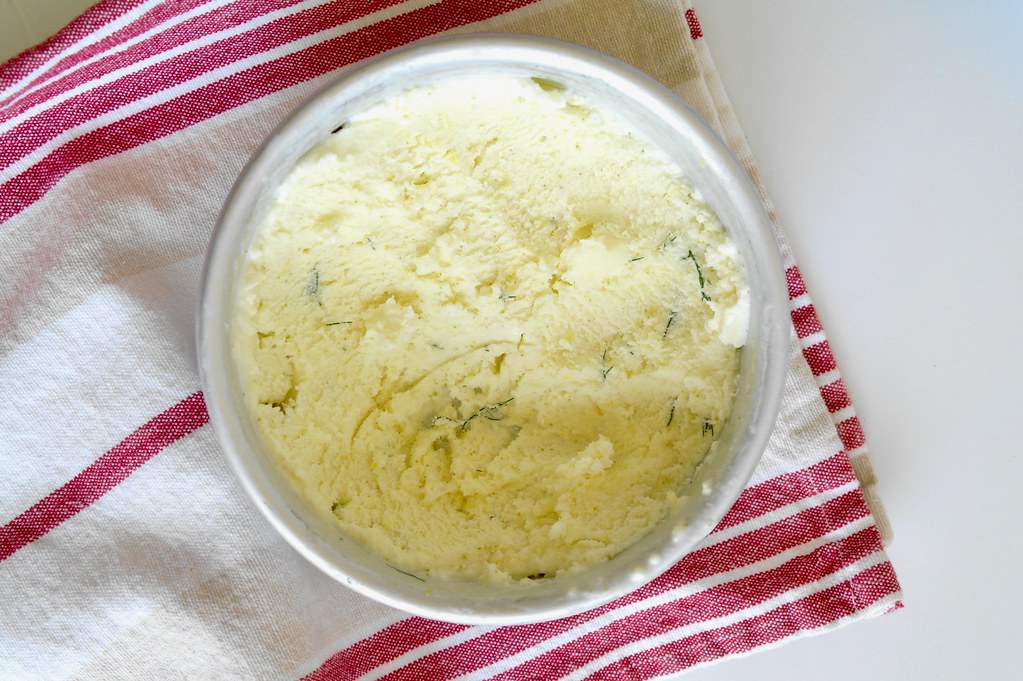 My love of ice cream has grown to new heights over the past summer. Admittedly, the old hand-crank canister does not make particularly excellent ice cream and it certainly takes some focused elbow work to achieve some degree of creamy aeration. But in ice cream there is a whole new breadth of opportunity for incorporating flavours – infuse the milk, add a puree, or other mix-ins.

Dill has conveniently spread throughout the community garden like a far more benign purple loosestrife. When we noticed it was flowering, heads encircled by golden pollen granules, making ice cream was one of the first things that came to mind.

I concede that the dill is not for everyone, relegating this ice cream more so to an enjoyable curiosity than an ice cream that even I would choose to eat several litres of. But I often aim for that sort of thing anyhow. Besides, it’s a lovely way to celebrate dill in both frond and pollen-forms and commemorate the end of summer as the dill passes through its life cycle with cardamom hinting at the warming spices coming up in fall. 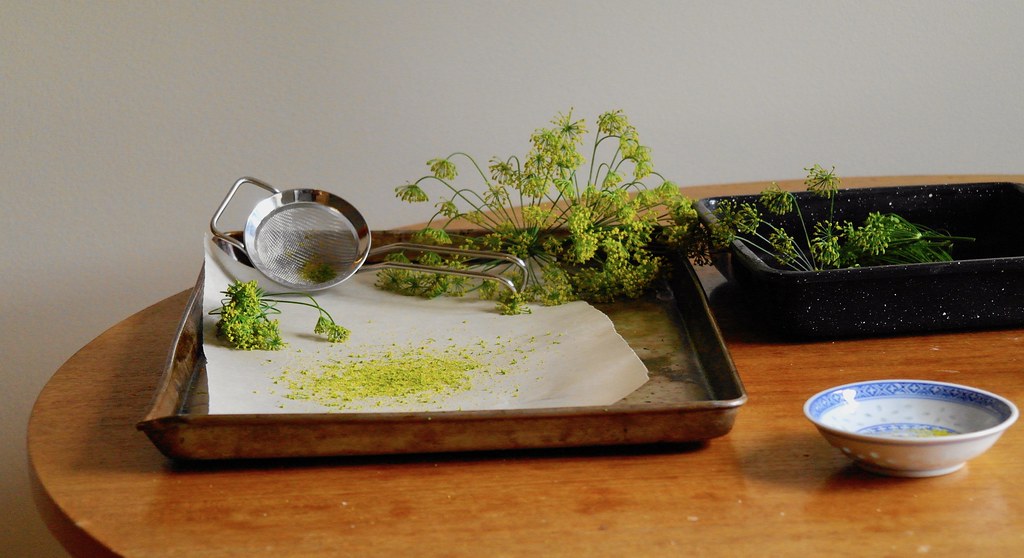 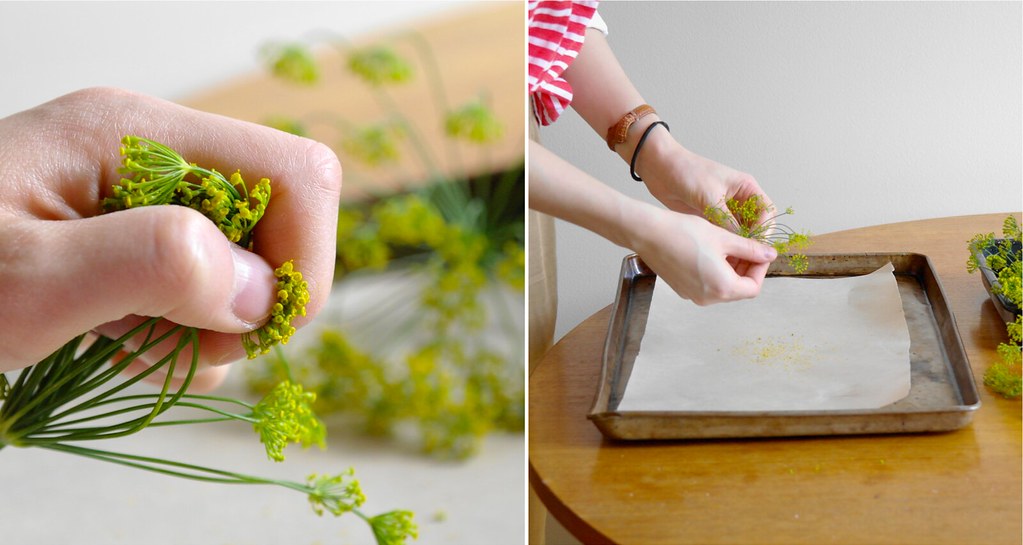 At first I thought collecting dill pollen would be a graceful process, imagining that only a flick of a wrist would be needed for a sunshower of pollen. However, after all my graceful maneuvers, I had nary more than a few grains sprinkled erratically over the tray. I realised that harvesting pollen takes some dedication …and I wanted the process to be, as far as pollen collecting goes, as efficient as possible for my stunted attention span.

In the end, this was the protocol I found was most effective:

It took about seven dill flower heads and at least what felt like close to an hour (keep in mind most of that was wasted on trying to be graceful) to collect 3/4 tsp of dill pollen. 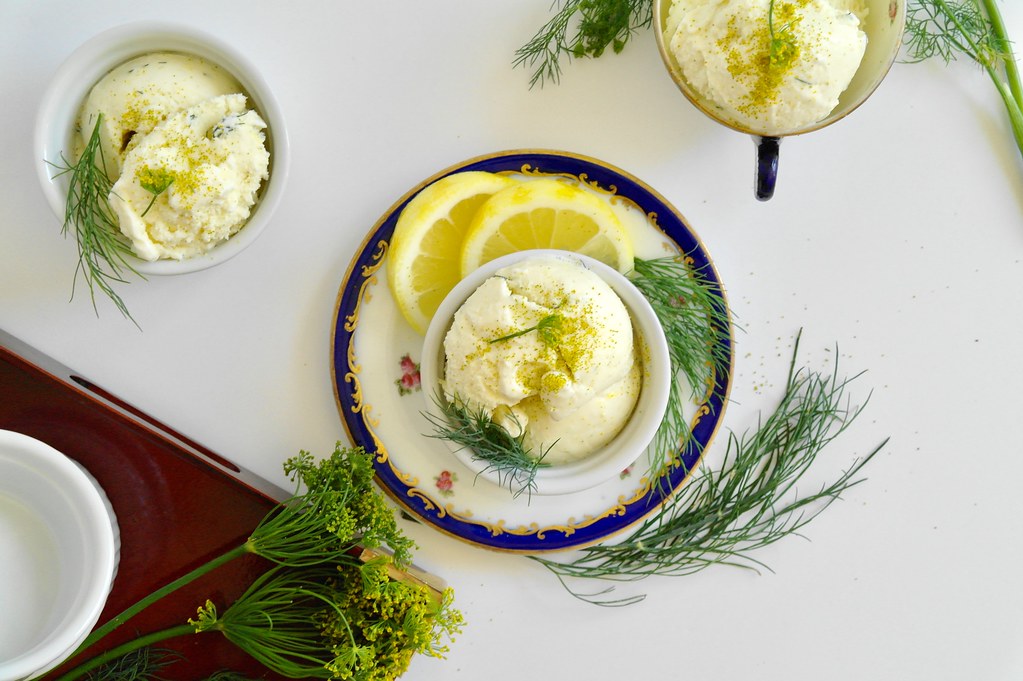 The firmness of homemade ice cream can be a bit of an issue for me as I like to make ice cream barely sweetened. Sugar increases the freezing point (i.e. shifting it less below zero centigrade) – think granita! – and so by cutting down the sugar, we lose the softening effect.

Another method to increase the freezing point is to add some alcohol. I didn’t realize how profound an effect the alcohol could have until I compared the amaretto rosewater and cherry ice cream from earlier to my last ice cream, lavender and peach. One was scoopable nearly right away out of the fridge (though by the end of it, I did use 1/4 cup of amaretto and cognac –oops! but delicious!), versus needing about 10 minutes out on the counter, and some melting arounds the edges.

However, liqueurs don’t always fit into the desired flavour profile. Then, while looking up pollen ice creams to get a sense of how much was needed, I saw this salted honey and bee pollen frozen yoghurt from the Kitchen McCabe (which, by the way, sounds amazing!), which used a bit of vodka to keep the ice cream soft. Of course!

Taste as you add the vodka to make sure you don’t add too much, and if alcohol in ice cream is not your thing, I hear ice cream can also be more evenly thawed in the fridge for 20-30 minutes to avoid the edges melting.

I’ve enjoyed dill in a sweet context before, such as this lemon dill roll cake. For this ice cream, to ensure there was enough dill flavour, the base is infused with dill and some dill pollen is mixed in as well. To make sure there is adequate appreciation of your dill pollen collecting efforts, save a bit to scatter over top ensuring it is very visibly noticeable.

I enjoyed the combination of dill and cardamom; cardamom is a bit lemony itself so it made for a nice pairing in the manner of lemon-dill and its rounded spice flavour also reminds us, without the use of excess sugar, that this ice cream is more on the side of dessert than a creamy fish sauce. I kept the amount of lemon minimal to make sure that the dill stayed central, but if you’re not certain that you’re feeling the dill, you can amp up the lemon for primarily lemon with a bit of dill.

Overall, it’s a refreshing ice cream, both through lemony tartness and herbaceous dill, all curiously wrapped up with cream and cardamom. A bit of summer, and a bit of fall. 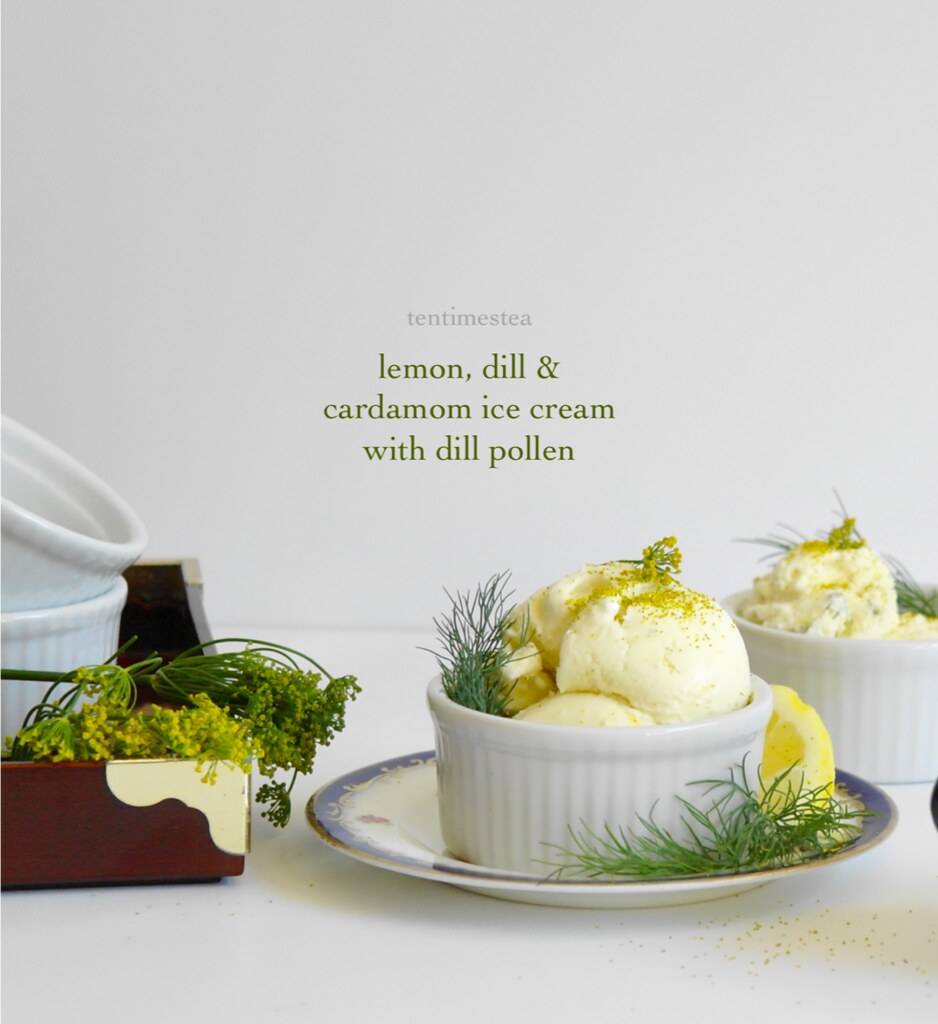 Heat the milk until almost boiling. Crack the cardamom pods with the heel of your palm and add those and the 5g chopped dill to the milk. Cover, let cool to room temperature and then let continue to steep by chilling the mixture overnight.

The next day, strain the milk and whisk in the egg yolks, sugar and honey. Place in a glass bowl over a pot of simmering water and cook, stirring continuously with a rubber spatula until a custard forms which is thick enough to coat the back of a spoon and hold a line in it or until the temperature reaches 165-170F.

Remove from the heat and whisk in the cream. Check for sweetness and add more as desired. Add the lemon juice and zest – I only a bit, but for a more lemony ice cream, add more. Mix in the vodka, checking to make sure there isn’t enough to taste. Chill.

Churn according to ice cream machine instructions, and near the end churn in the dill pollen and 1 tsp small dill fronds. Serve, sprinkled with additional dill pollen.