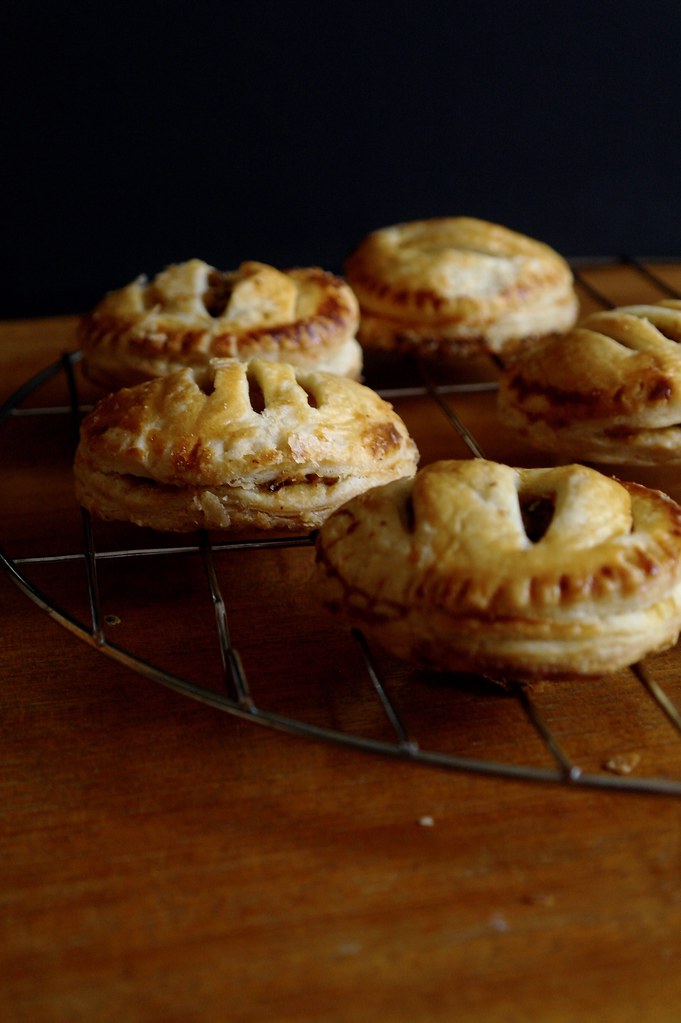 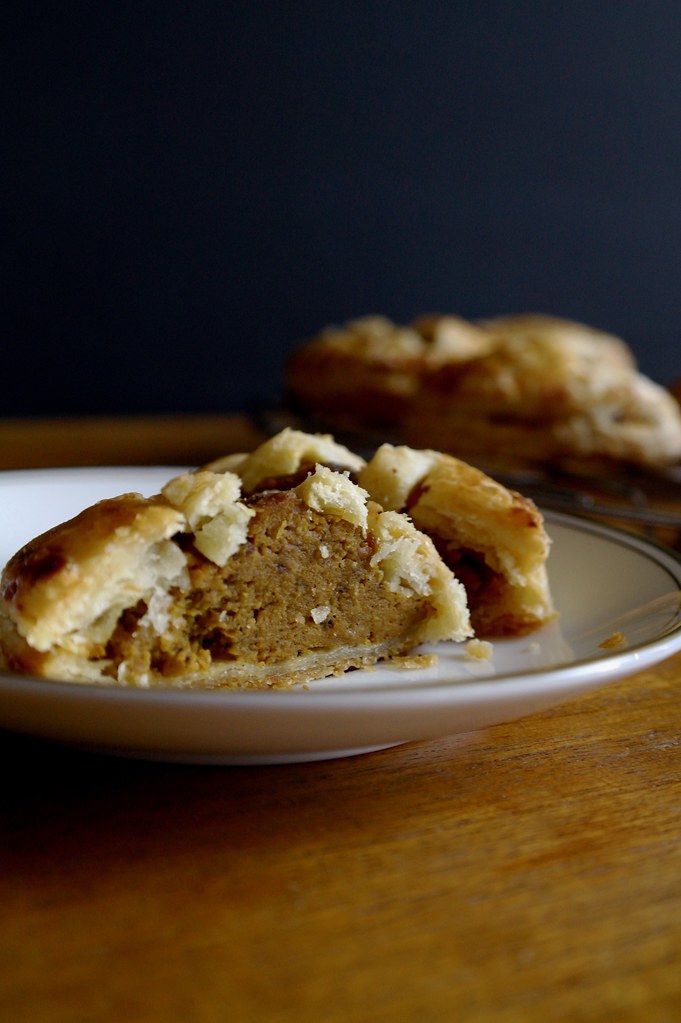 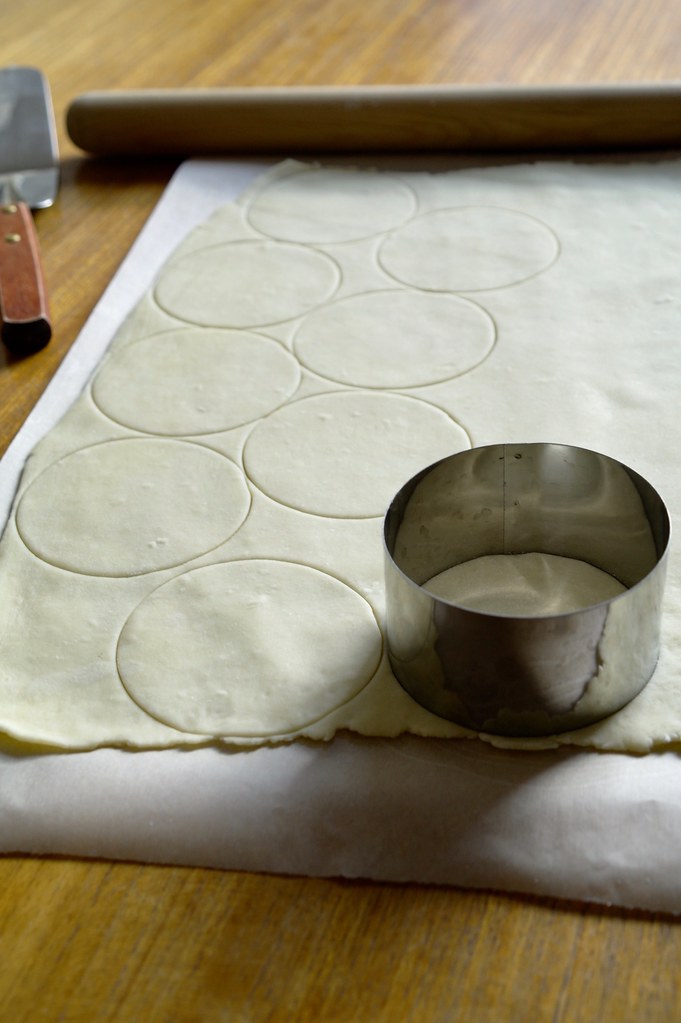 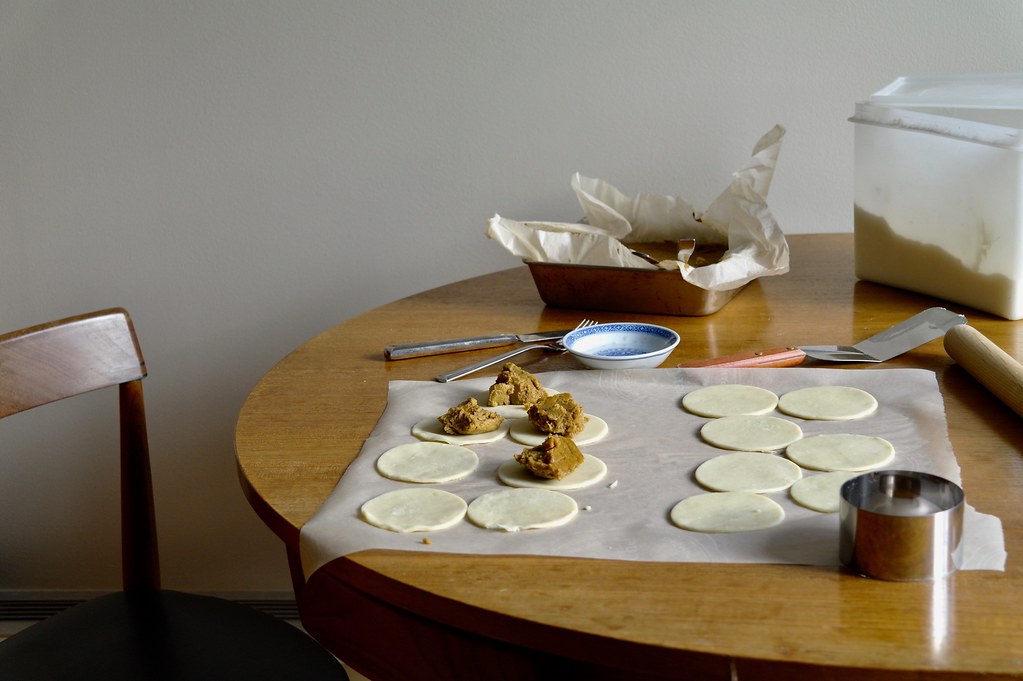 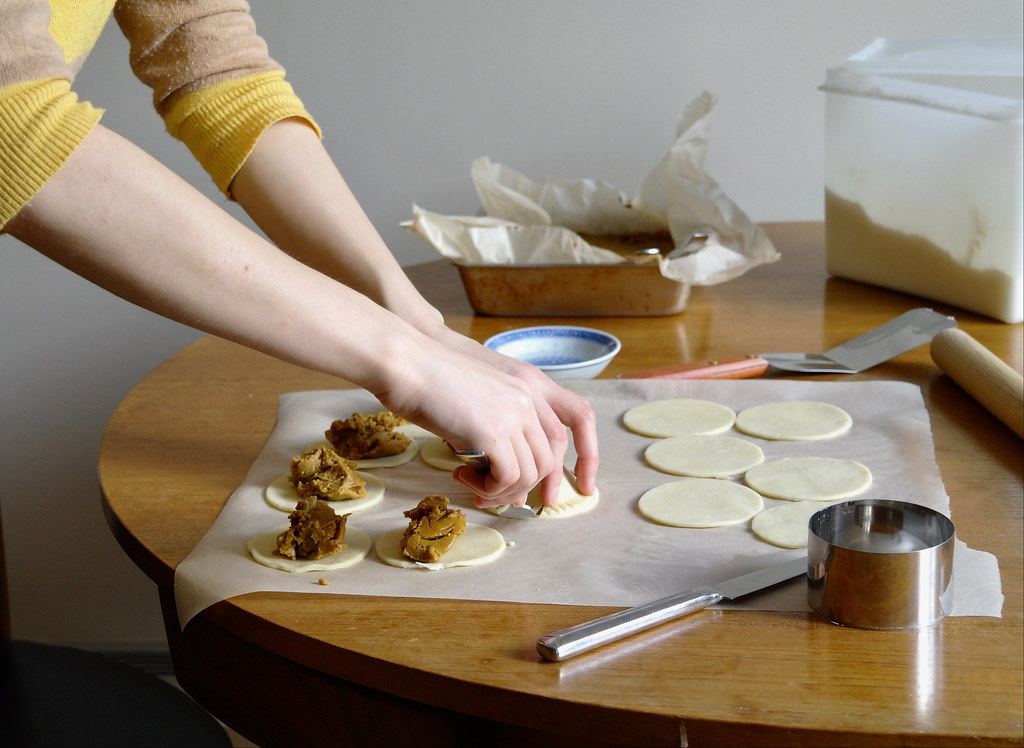 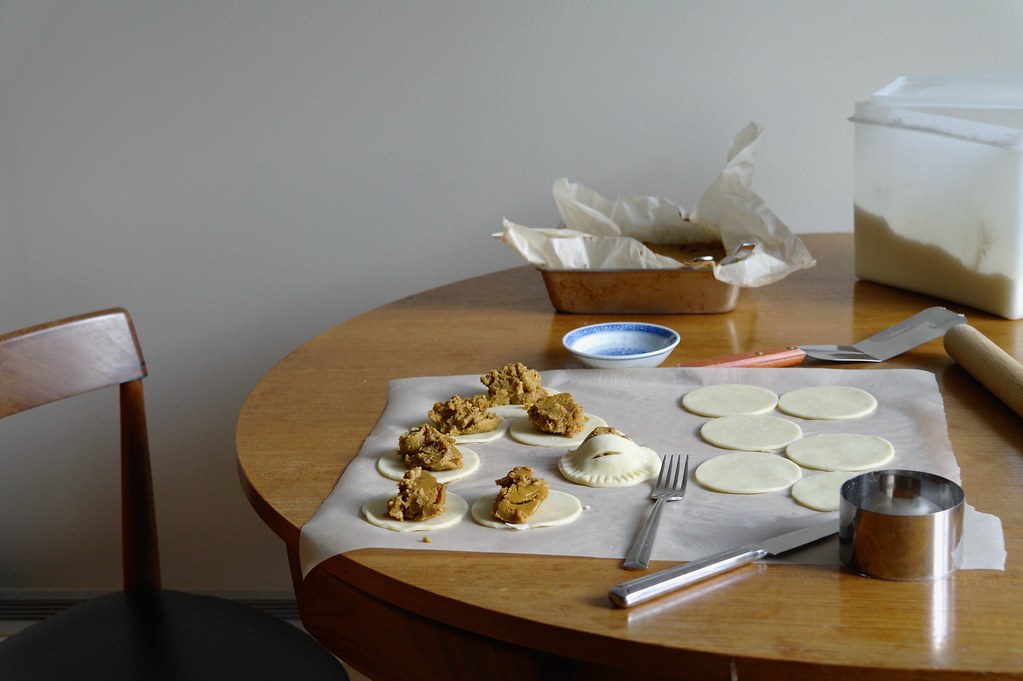 It is probably controversial to call these pasties. But they’re what I first imagined a pumpkin pasty would look like back when I didn’t know what a pasty typically looks like.

They are exactly what I made back in high school to share with friends on the last time I went trick-or-treating (while a lovely time catching up, it also reinforced how much I dislike trick-or-treating and made me quite thankful I was getting way too old to be roped in again).

The pastries are straightforwards. Make a pumpkin pie filling, which I pre-baked so that the pastries would be saved from soggy bottom crusts, and then pack the filling into a pie dough and bake.

The pastry, a pie dough modified from Chez Pim that I’ve been making since junior high school, has a great puff and delicate layers – the process is actually similar to a rough puff. I did find the pastry a bit on the bland side though. I thought about some options–brown butter (I’ve been meaning to try making a pastry with browned butter), butter infused with spices or tea, more salt, some brown sugar. Then I realised a pretty obvious solution to the issue–whole wheat flour. It’s been a while since I last made a pie pastry without whole wheat flour–and so that probably is contributing to that slightly lacking taste. 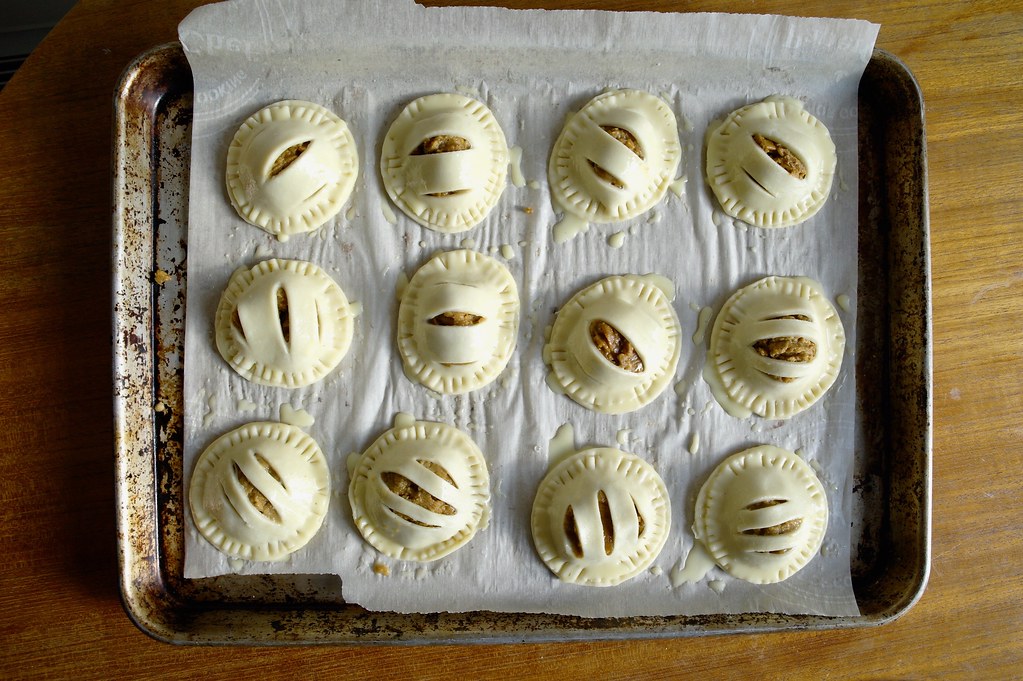 It took me until the last few pastries to realize how to make them look nice. I found it helpful to mound the filling, which is probably best achieved using your fingers to mould the filling into a smooth dome. Leave just a small border around where the pastry will be sealed. This will ensure you maximize the filling to pastry ratio and give the pastries a nice smooth rounded look. It is easiest and neatest to cut slits into the tops layer of pastry before assembling them. The slits should be positioned close together so they all end up on the top of the pastry. It looks a bit strange at first when you’re only cutting them into the round of pastry as they’re all quite centred and close together. However, if you space them too far apart,  the slits end up as side vents on the filling.

Here is a little diagrammatic summary of what I tried to describe above on a sticky note.

But then, that all being said, I had some remarkable puff on the pastries which meant that in the end, all of them rose considerably and looked essentially the same.

I always imagined the pasties to be sweet, but this savoury number from Ink & Reel (plus some beautiful writing on how food brings people together in life, and in Harry Potter) really catches the eye.

Writing in such fondness about Harry Potter is perhaps not complete without something else – a recognition of of JK Rowling’s transphobic views which fit into the playbook of trans-exclusionary radical feminists/gender critical feminists. This article by Nathan Robinson is an excellent and thoughtful piece about the seeming chasm between the utter breadth of imagination that built the Harry Potter series and JK Rowling’s narrow-minded bigotry, and what that means for the books. For more on understanding how gender critical “feminist” discourse is transphobic and harmful, I highly recommend this video by Contrapoints. 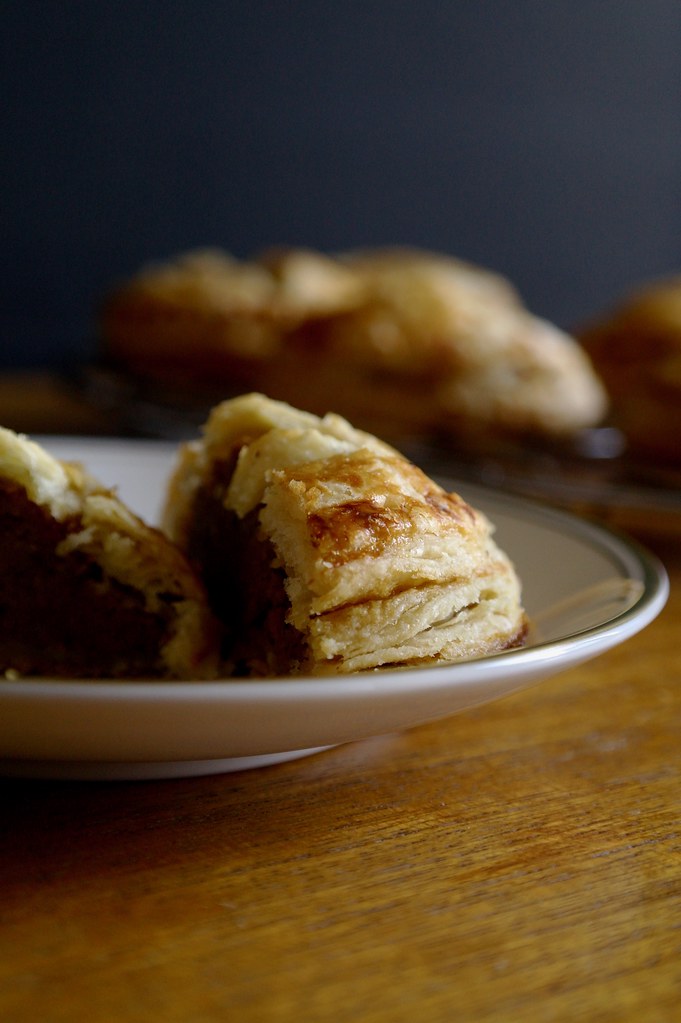 Based on Chez Pim‘s spectacular pie dough. When you get the technique right, this produces so much buttery flake!

Cut the butter into thin slices. Mix the flour, salt and sugar together and pour out into a mound on the counter. Place the butter slices on top, flipping them over to ensure they’re coated with flour. Then, using the heel of your hand, press down and flatten the butter slices into large flakes. Use a bench scraper to flop over half of the flour and butter mass onto itself and continues to flatten. Repeat until the butter is mostly in large flakes. Make a well in the centre, add in the ice water, and mix, using that same sort of folding the pastry over onto itself sort of technique. Once it has mostly come together into a shaggy mass, wrap in plastic and chill to harden the butter, around 30 minutes.

Then roll out the pastry on a floured surface into a long rectangle. Fold into thirds, rotate 90 degrees. Roll out and fold the pastry two more times, then chill completely before using.

Adapted from the label of the pumpkin puree tin.

Preheat the oven to 350F. Line an 8″ square pan with a piece of parchment paper. Whisk all the ingredients together and pour into the prepared pan. Bake until the centre is still a bit jiggly, but a knife inserted partway between the middle and edge comes out clean.

The dough has likely warmed up during this time so chill completely.

In the meantime, preheat the oven to 400F. Brush the pastries with the egg wash and bake for 20-30 minutes or until well browned. Turn the temperature down to 350F after 10 minutes.

2 thoughts on “pumpkin pasties (sort of)”