a super lazy applesauce (no peeling or coring!) and a simple spiced apple sauce bundt cake to use it in 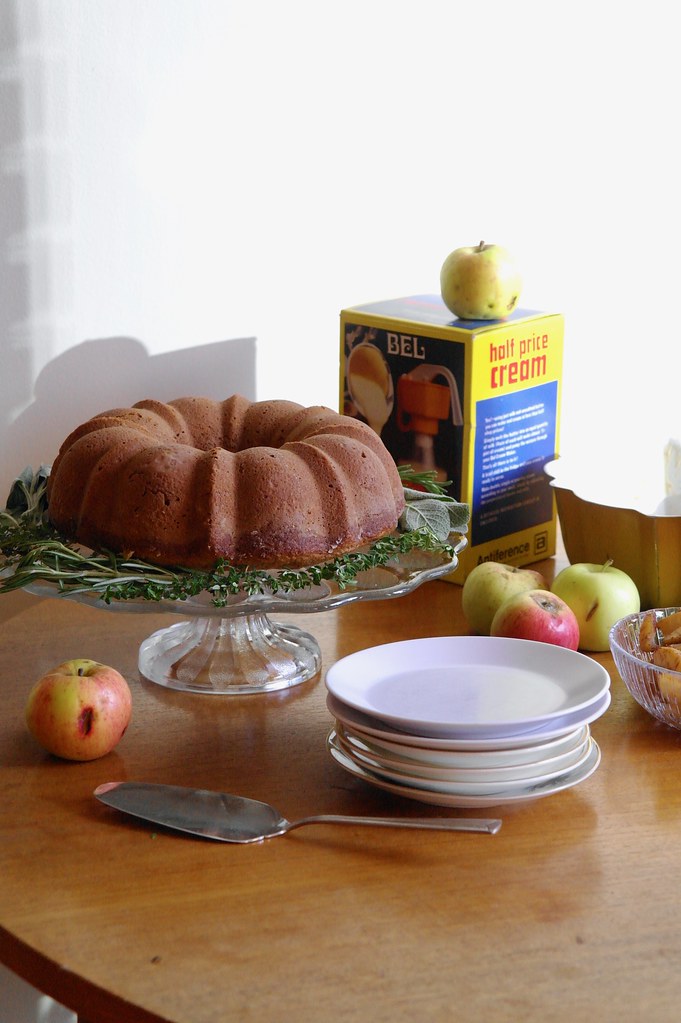 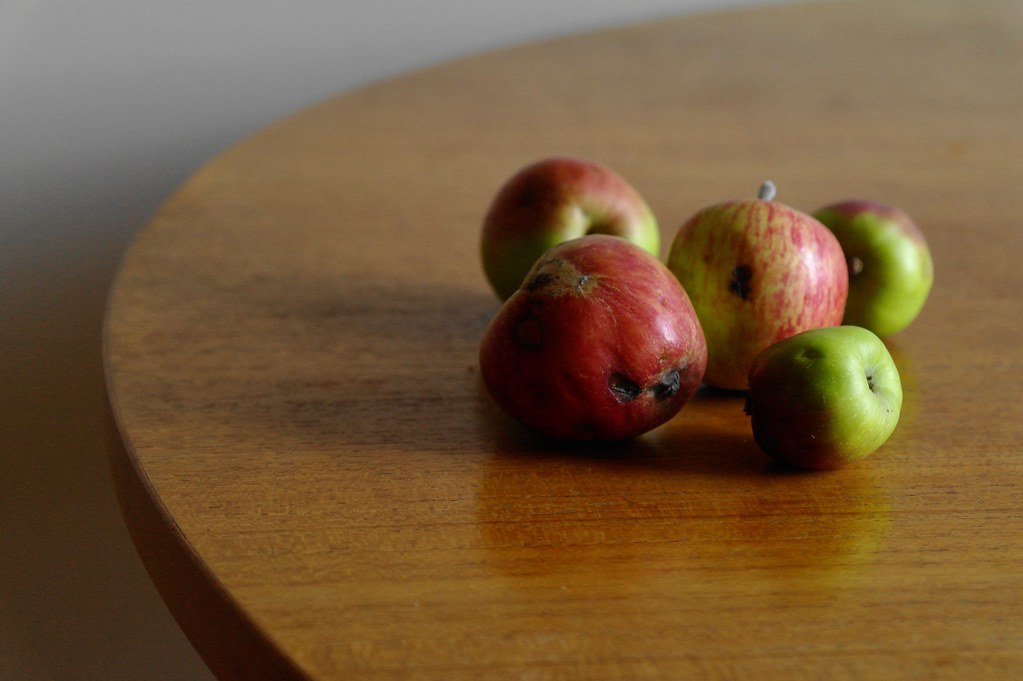 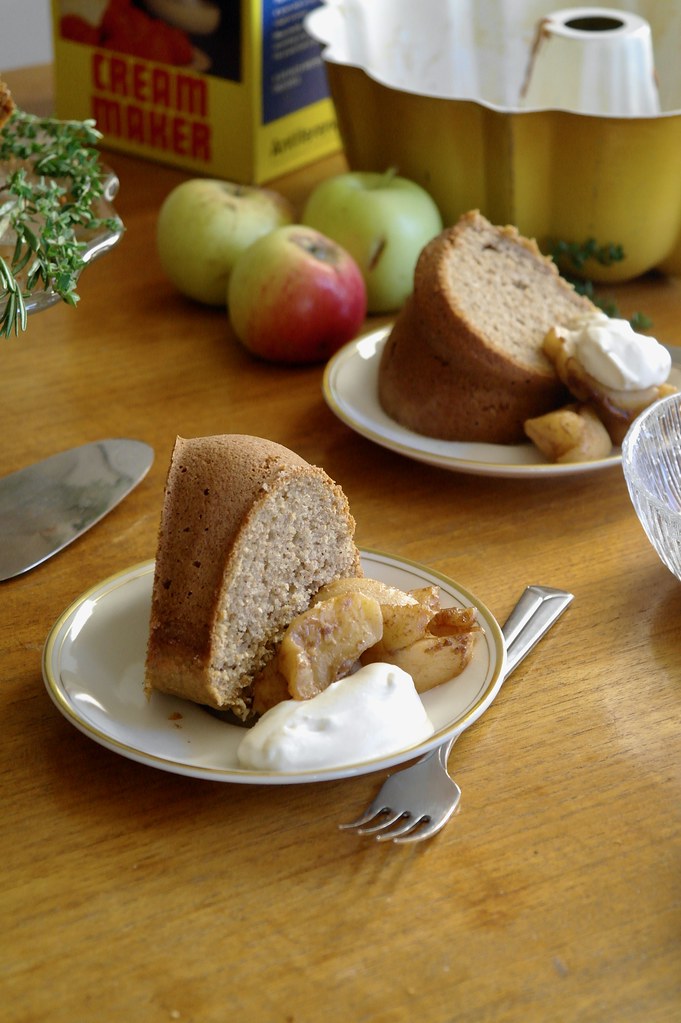 There are particular blocks of the city that are never a bore to walk past. It’s been a bit hard to pinpoint what I find myself drawn to – I used to think it was age. Look at these pretty old buildings! I once texted to my friend, who, studying abroad in England sent me back a picture of some genuinely very old buildings… and I realized I wasn’t really into buildings solely for their vintage, nor for decay or collapse.

Rather, I think it’s a matter of accruement (a word I selected in part because of how satisfying and pretentious it is to say), or well, something along those lines. The cityscapes I find the most interesting are usually lively and cluttered. I tend not to notice the overhangs and alcoves and makeshift structures until I do. And I tend not to appreciate them for what they are until I do: the edges of the superimposed renditions collapsed into the building’s current form. In a literal sense, such as of new businesses, coexisting with old signs from past restaurants and shops that swing overhead, the front of the building itself engraved with its previous late-19th-to-mid-20th century purpose.

I love catching sight of those pieces of unintentional design – anachronistic architectural details, patchwork fences, sprawling greenery, unorthodox uses of furniture, intricate makeshift shelving, faded paints and old shadows. It’s the ways that some buildings are shaped by many small changes by many people all piled together. This sort of thing does often comes with some wear and tear, which can speak of neglect, or can speak of what wore it – and it’s the latter that is fun to focus on.

This all got me thinking about what makes me attached to recipes. Like those inherited hand-written copies with notes in the margins, ingredients added, quantities adjusted, in overlying scrawls in pencil and pen and blue and black ink – though I have very few of them. More often, it will be accruement that manifests as a series of more recent renditions, input from others and dramatic swings in concept. Things like this cake, which is pretty simple but also an accumulation of ideas and attempts bounced back and forth between my mum and I. 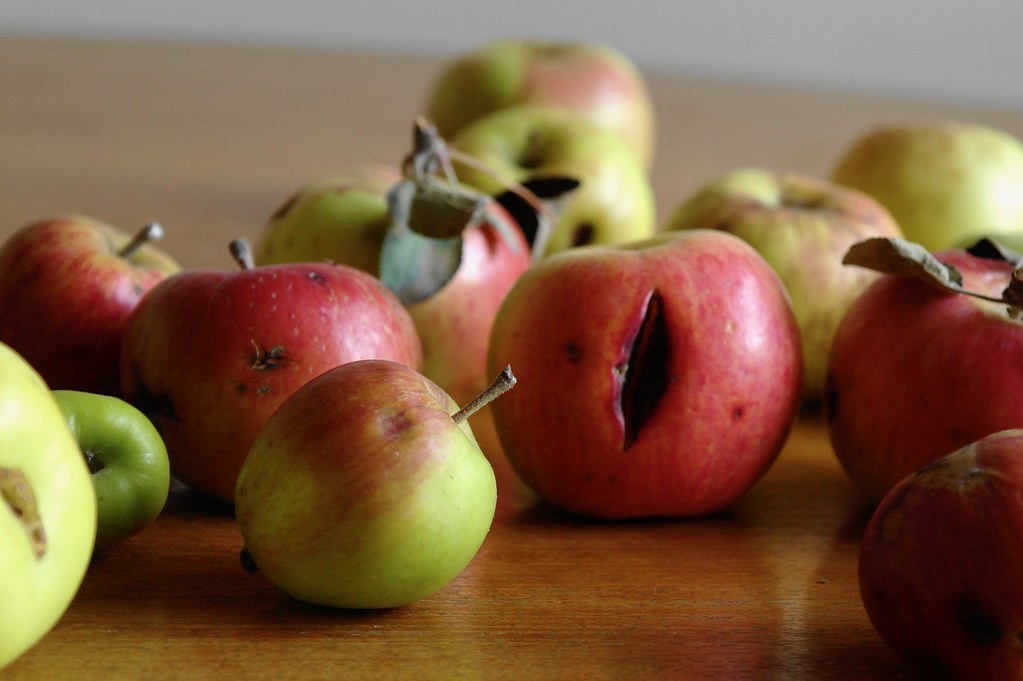 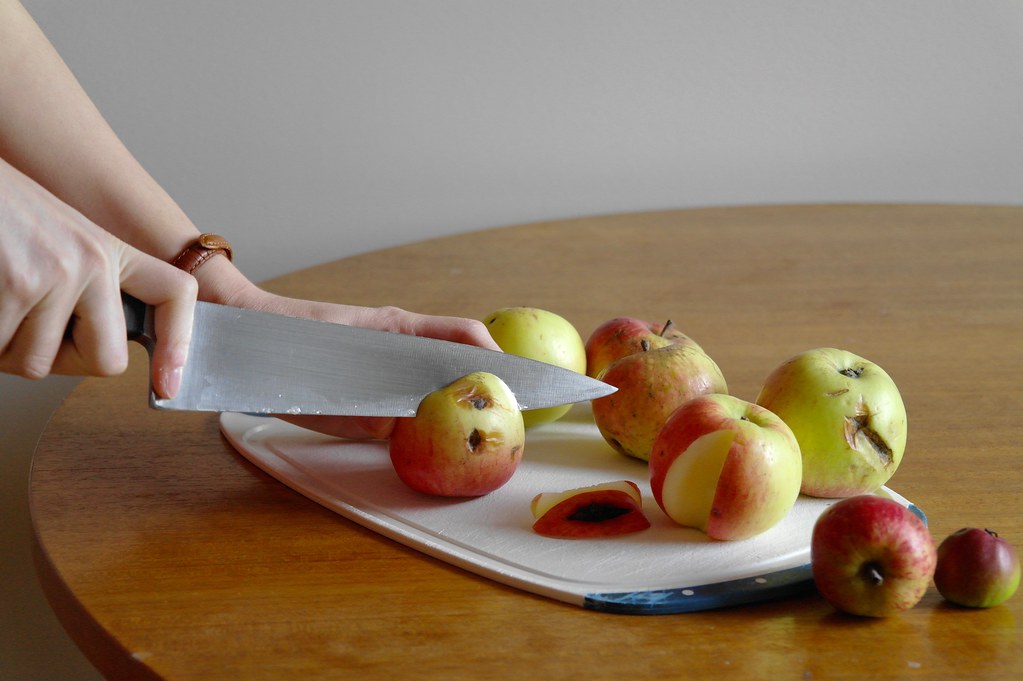 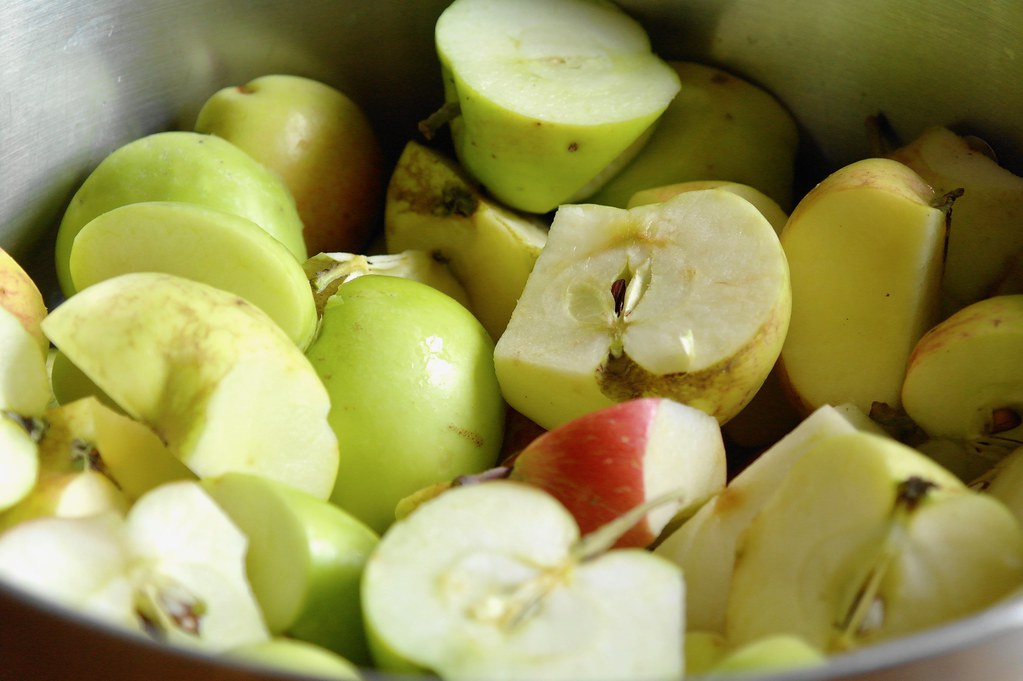 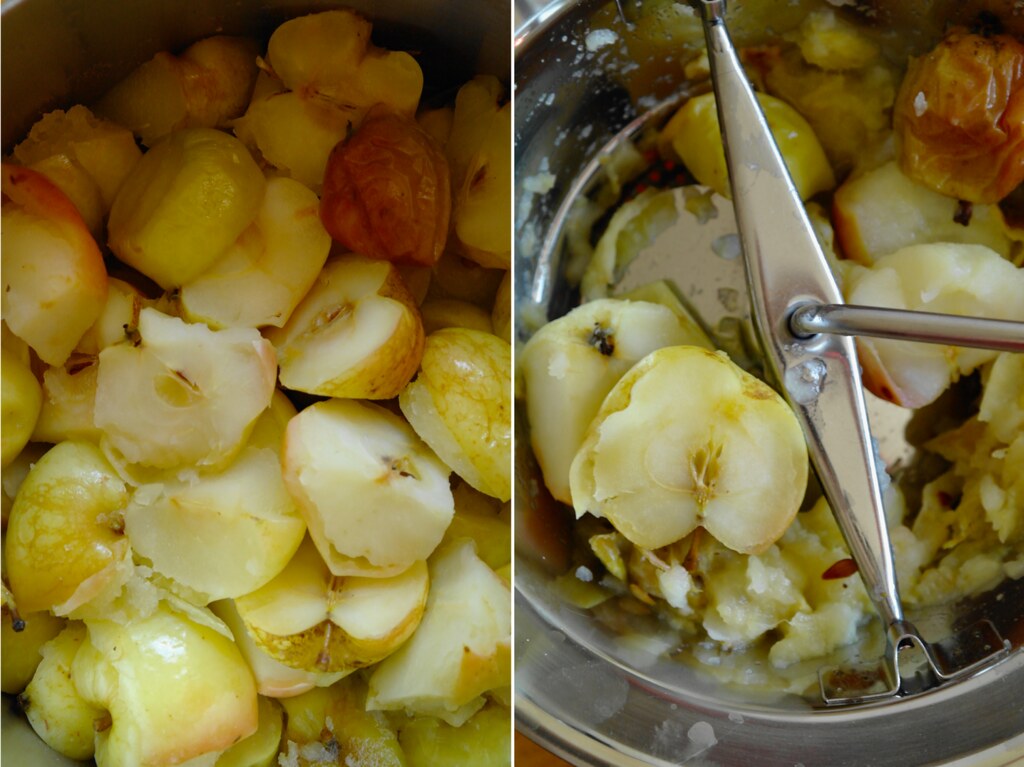 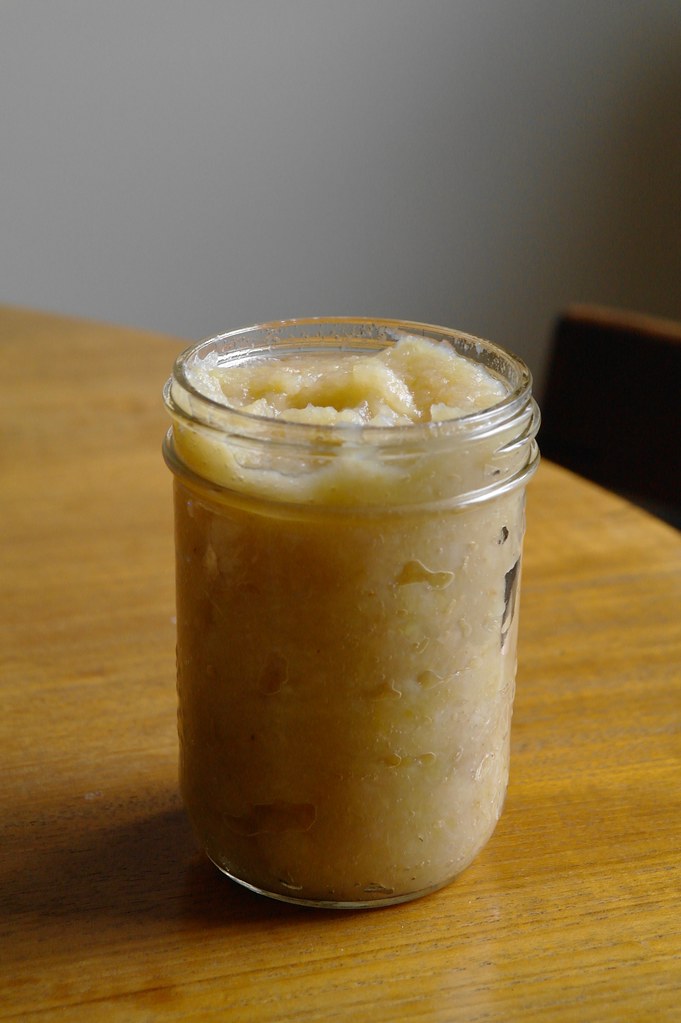 This began with another bag of windfall apples collected off the ground of the community orchard. The assortment of different trees and the time spent lolling on the ground gives these apples a lot of character that lends itself well to dramatic apple portraits.

But when it comes to cooking them, they are numerous and small, subjecting one to an arduous process of peeling and coring. My mum, who has pragmatism and efficiency leaking from her pores, showed me how to circumvent that by making applesauce. Her technique requires no peeling or coring, though does require a food mill (which I generally think of as rather obscure with little use, but every so often you realize there is something it can do that nothing else can).

After rinsing the apples and trimming off any obviously bruised, rotten or bitten edges, we halved or quartered them and boiled them until tender. The apples are then passed through a food mill where the grate presses the flesh through, still mildly chunky, but catches the seeds and peels. It works wonderfully for making a soft, thick and textured applesauce. 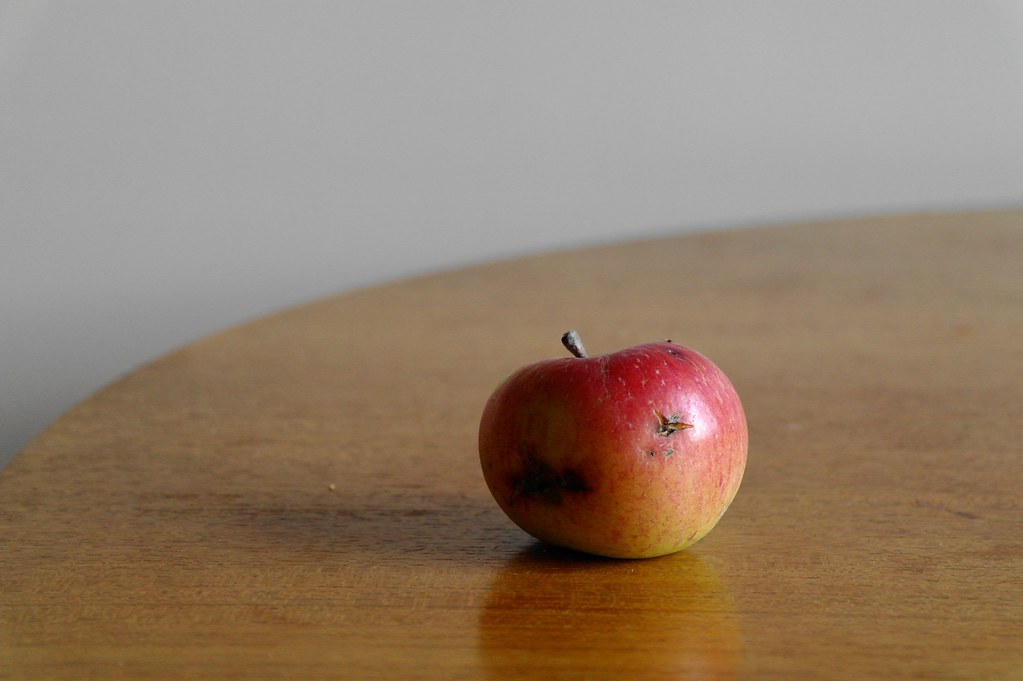 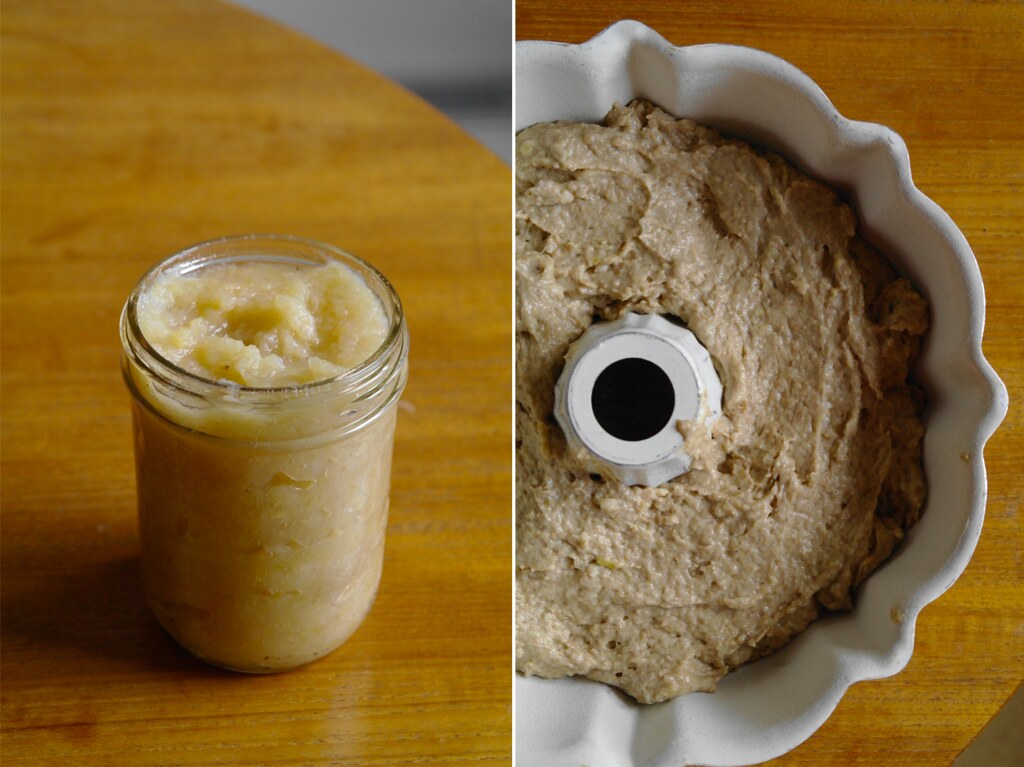 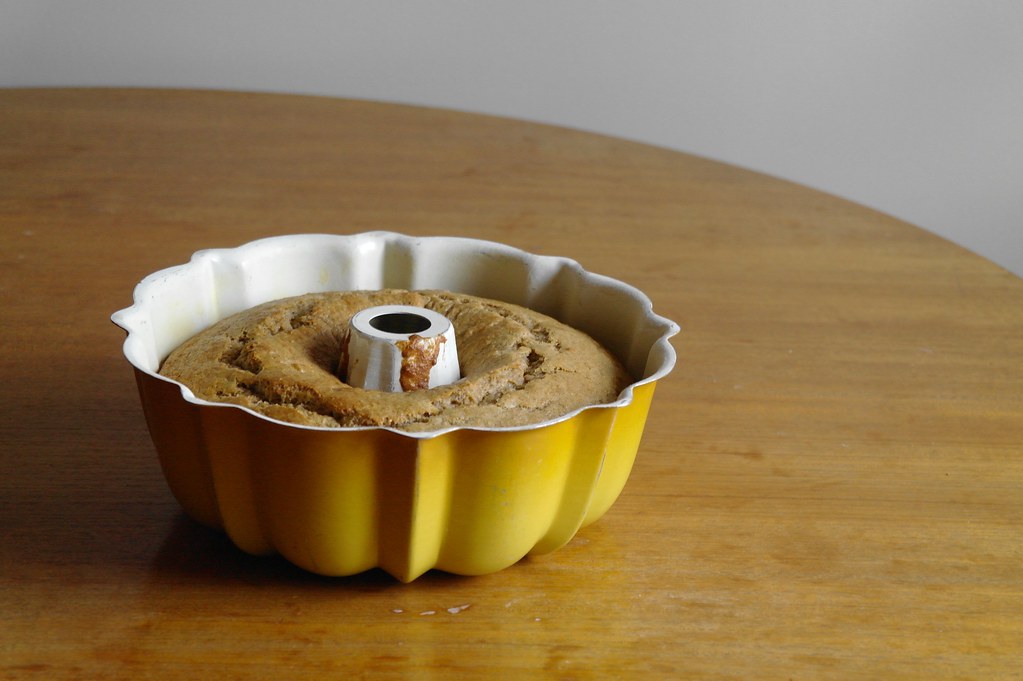 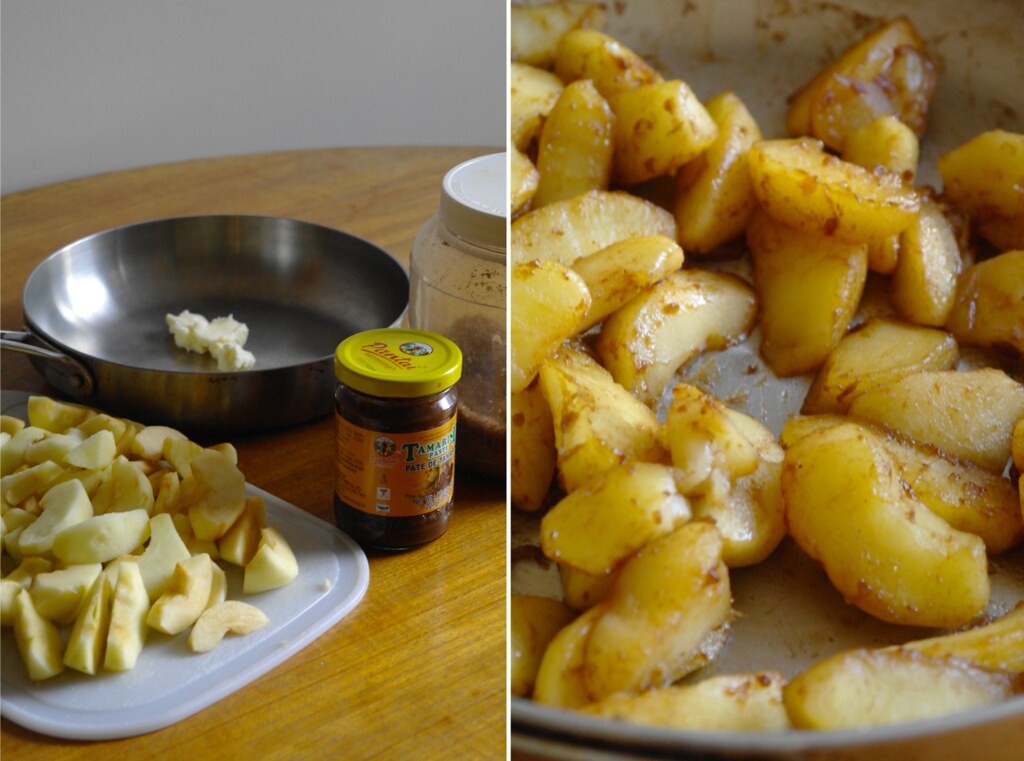 When it comes to applesauce, I usually think of a canned applesauce cake I used to make in elementary school. Previously my mum had tried making it into a layer cake, but was a bit put off by how the cake hardened in the fridge.

I refurbished the concept to make it a bit more practical and cozier – instead of an assembled cake, I served it as thick slices with softly whipped browned butter cream and warm tamarind and brown sugar apples. 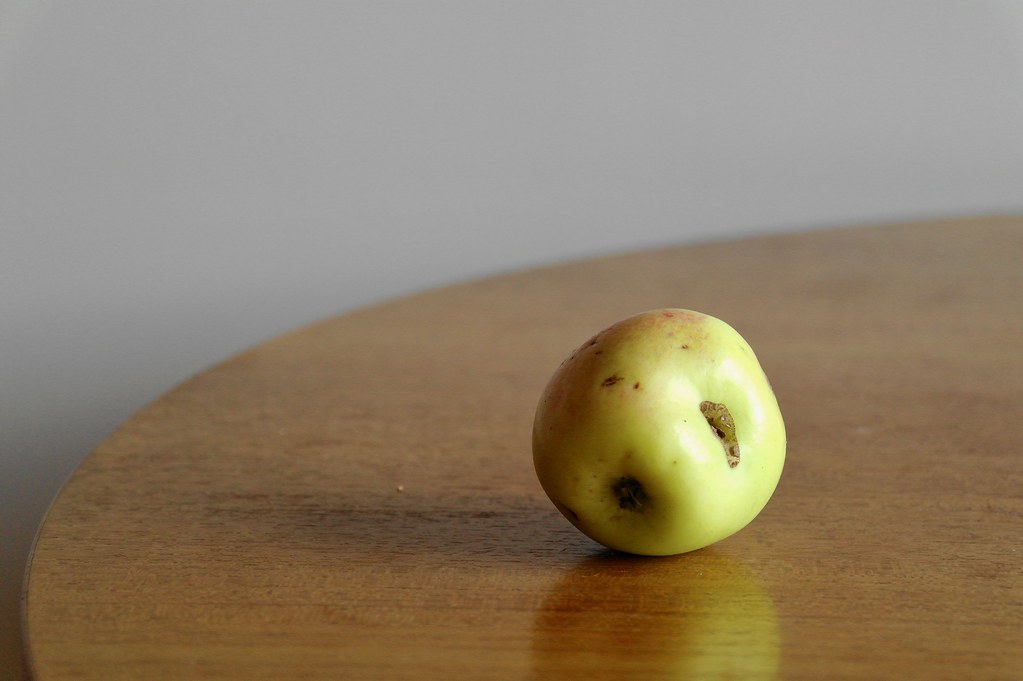 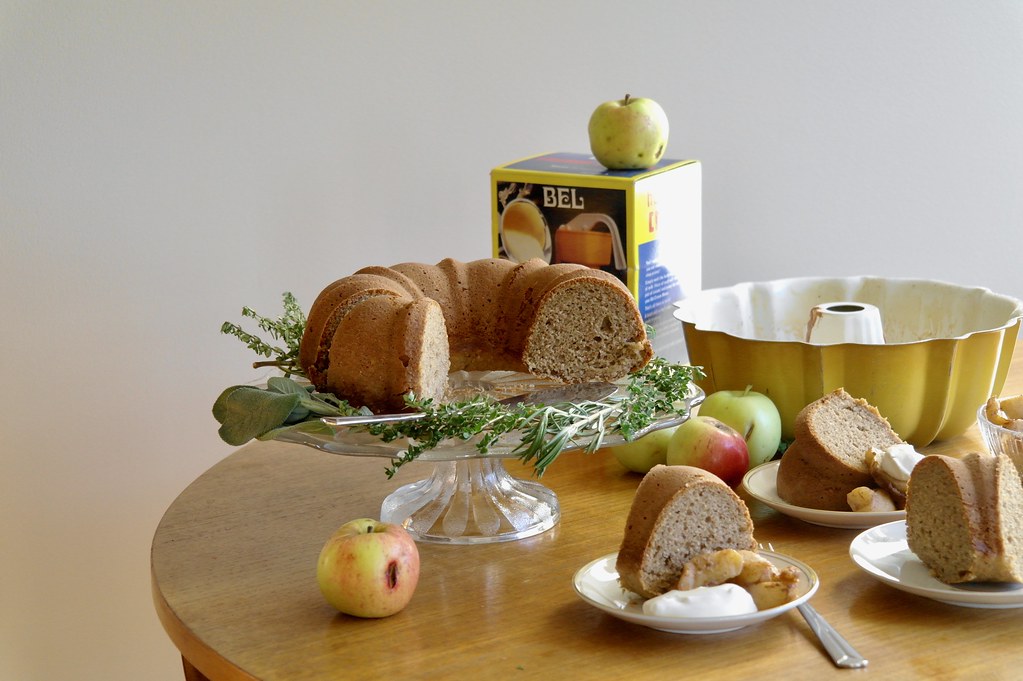 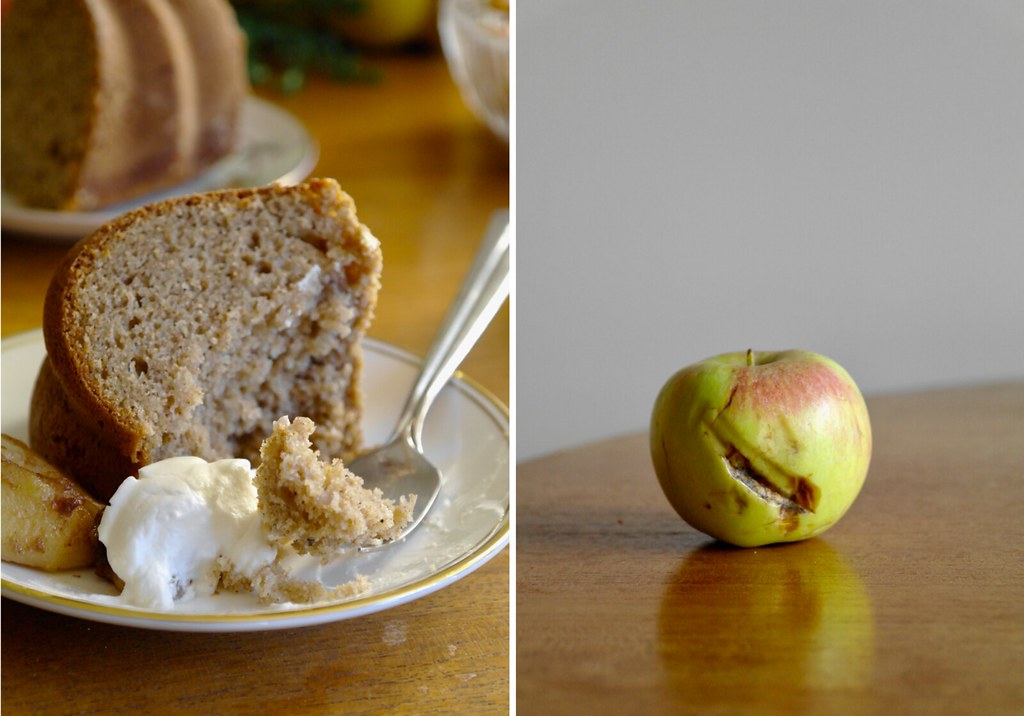 The bundt is like a moist, mild spice cake. It’s a bit plain with its muted colour palate but slices easily, travels well as a snack, and can be dressed up if needed. While it’s okay on it’s own, the star really is the tamarind brown sugar apples and the browned butter cream, which need a bit of a starchy background to be eaten against. Oh and the other star – the apple sauce. Just eat it as is, or with a bit of cream or over yoghurt and granola. 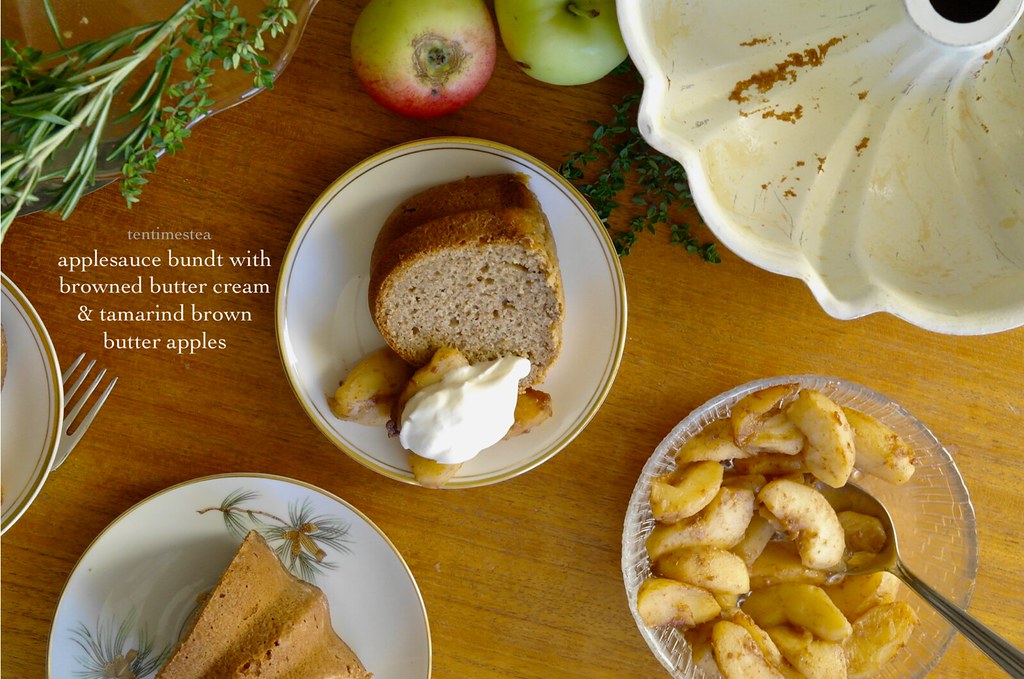 No peeling, no coring, and makes an applesauce that fairly smooth but still with a bit of texture. This technique, which uses a food mill, is especially beneficial for when you have a lot of small apples the size of apricots where the peeling and coring takes too much time for it to be worth it. Here, just boil the apples whole and the food mill will do the rest of the work.

Rinse the apples and cut off any obvious bruises or scrapes, but don’t bother to peel or core. Depending on the size of the apples, cut into quarters, halves, or if they’re small, leave whole. Place the apples in a large pot and add a couple inches of water (the water level should only reach to half that of the apples – add according to how many apples you’re cooking). Cover and bring to simmer. Stir occasionally until the apples are soft and tender, but not falling apart.

Place a food mill over a large bowl and scoop in a few large spoonfuls of apples (try to leave any excess water in the pot). Press the apples through the food mill – the seeds and skins will get left behind, but the flesh with pass through. Repeat until all the apples have been pressed through the mill.

Adapted from a newspaper clipping from 10 years ago – not sure of the original source!

Preheat the oven to 350F. Butter and flour a 10-inch bundt cake tin.

Cream the butter and sugars together until fluffy. Beat in the eggs one at a time.

In a separate bowl whisk together the flour, salt, spices, baking soda and baking powder. Alternate adding the flour mixture and the apple sauce to the butter mixture, beginning and ending with the flour.

Lastly, just as in a classic Victoria sponge, beat in the milk at the end to bring the batter to a “dropping” consistency where the batter is still fairly thick, but drops from a spoon.

Scrape the batter into the prepared pan.

Bake for around 45 minutes or until an inserted skewer is removed clean or with only a few moist crumbs clinging (start checking early). Let cool, then run a knife around the edges before tipping out.

Warm the butter in a saucepan over medium-high heat. Add the apples and brown sugar, and cook, stirring somewhat frequently, until the apples darken and become tender. If the pan starts to dry out too fast, lower the heat.

Once the apples are tender, stir in the tamarind paste and salt and taste – adding additional sugar, tamarind or salt as needed – this is what worked for my apples, but will likely vary depending on the tartness and sweetness of the apples you use.

Serve the bundt cake with a generous dollop of browned butter whipped cream and the tamarind apples.