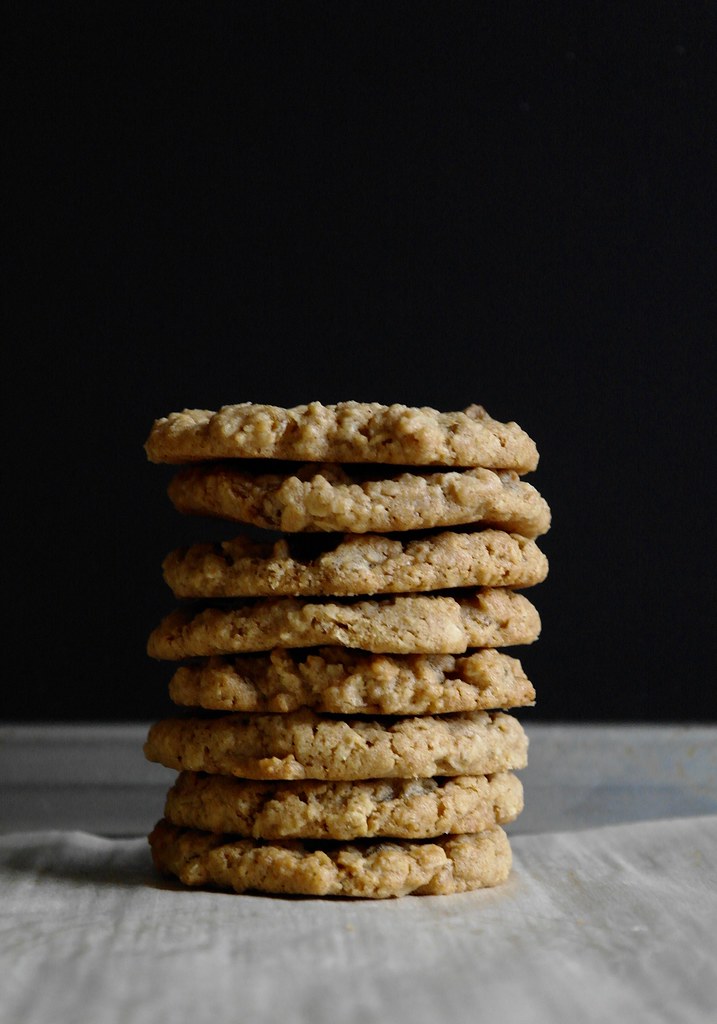 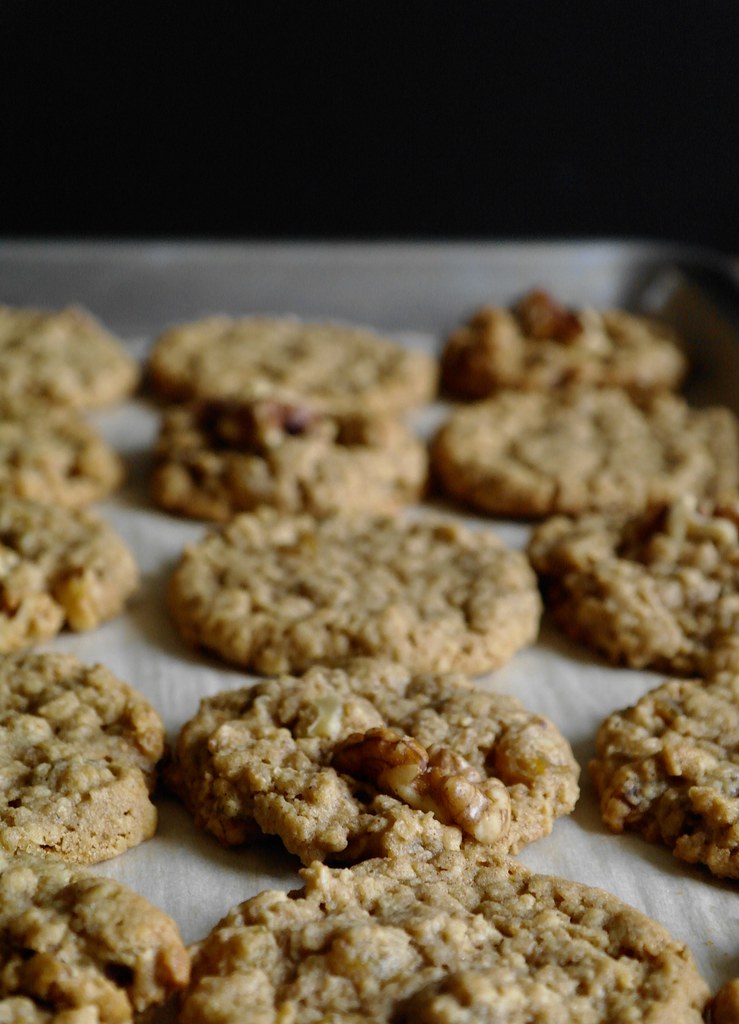 Working off of a modification of my mum’s usual oatmeal cookie recipe, at first I tried replacing all the butter with tahini. The cookies turned dry and crumbly (albeit also due to some mistakes with the oat measurement), like an oat-packed shortbread. I also found that the tahini flavour was a bit too strong for my preference.

For the next go around, I used half tahini and half butter and a bit of water following a tip from Emma Laperruque’s chocolate chip tahini cookie recipe. I preferred the flavour that a mix of butter and tahini provided, and these cookies also had the soft chewy texture desired. 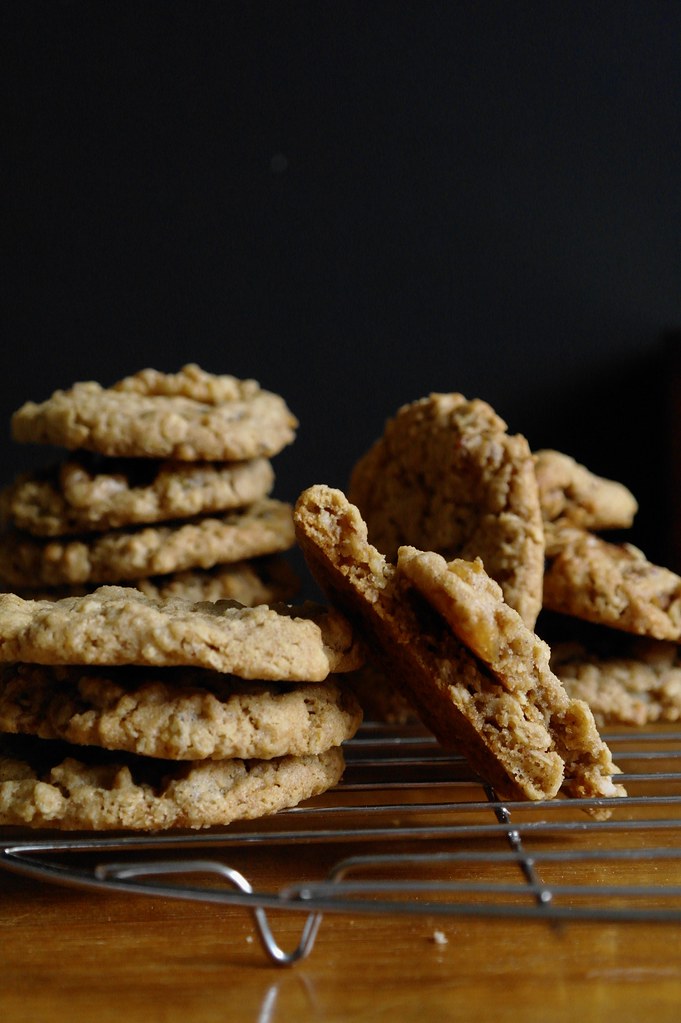 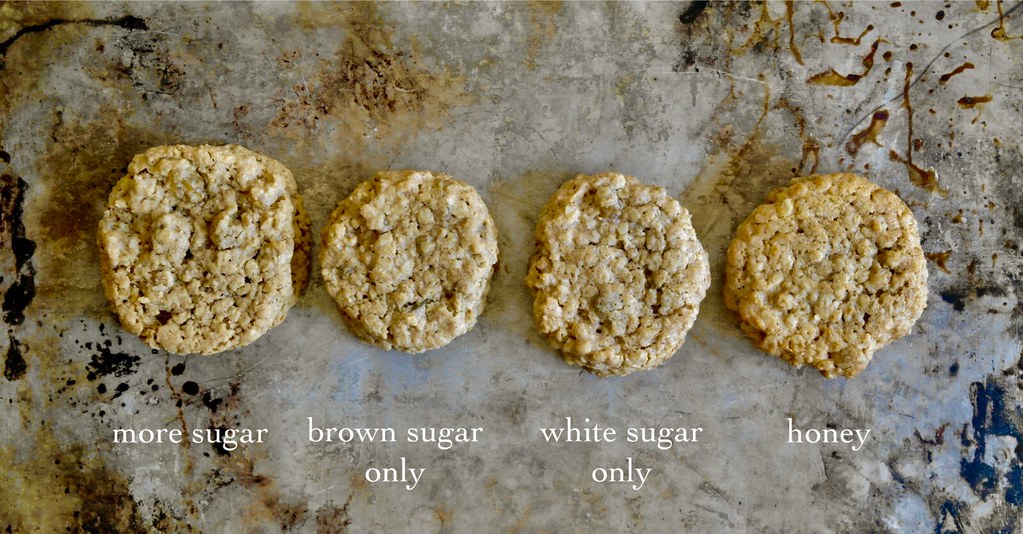 The second thing to play around with was the sugar. The brown sugar cookies have a thicker heft and a dense cakey chewiness. The cookies made with white sugar spread more but seemed lacking in flavour compared to those made with brown sugar. A bit of a complaint about tahini cookies is that they don’t brown as much in the oven and retain a bit of a greyish hue. I found that cookies made with all honey instead of sugar browned considerably more, but also found that they seemed dry and less chewy (perhaps they overbaked easier). The sugar combination I settled on uses brown sugar and honey together – the cookies are a bit hefty with less spread, but plenty chewy and flavourful.

It is a bit of a crime to tell you to make something with more sugar than it needs, but if you’re feeling like something rather sweet, the “more sugar” cookies (also the ones primarily photographed) were chewy. Like really chewy. To specify: thin and chewy, taffy-like even, not chewy in the thick/chunky sort of way. But as for a normal oatmeal cookie day, I would go for the regular sugar level … though perhaps that’s also because sometimes I dangerously treat oatmeal cookies as meal replacements.

I like the walnuts – as they help temper the sweetness from the sugar. Their addition does make the cookies chunkier, taller and generally less round when they spread – so chopping them finer helps preserve some aesthetics of the nut-less version. Whole walnuts on top were just handy to help differentiate the walnut from the non-walnut versions. 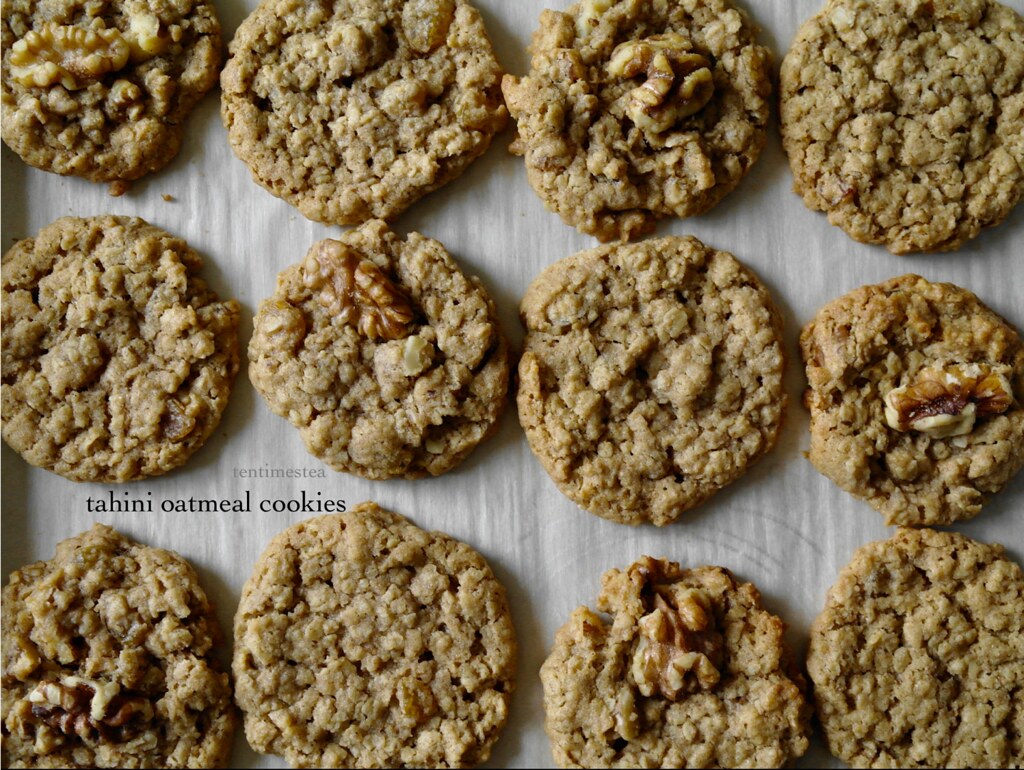 For the thinner version with a taffy-like chew, see notes below for the adaptation with more sugar. Was originally based on Stella Parks’ triple-oatmeal cookies in Bravetart, but recipe has changed quite a bit from then – much simplified into single-oatmeal cookies and into a single-bowl recipe too!

Inspiration and addition of water to account for tahini thickness from Emma Laperruque’s chocolate chip tahini cookie recipe on Food52.

Chopping the walnuts finer helps preserve the shape of the cookies to be rounder, flatter and less chunky. Of course, as always, I think oatmeal cookies are best with whole wheat flour.

Cream the butter with the tahini, and then beat in the water and egg yolk. Add the sugars, honey and vanilla and mix until smooth. Sprinkle the salt, cinnamon, and baking soda over top, mixing until completely incorporated. Then add the whole wheat flour, oats, raisins and walnuts if using and mix until combined.

Make balls of dough 1 1/2 tbsp in size and spread apart evenly on the pan. Flatten each ball of dough.

Bake for 12 minutes – they’ll be very soft and the tops will likely not reveal much browning, but check the bottom of a cookie by lifting it up with a spatula to see if they’ve turned golden brown. If they have, they should be done.

Note: for a very chewy cookie – the more sugar version

For a thin cookie with a candy-like chew – a bit too sweet for the usual, but on occasion, maybe with a large glass of milk to balance it out.

Make as above replacing the brown sugar and honey with: