jook, or rice porridge, is a definite winter comfort food for me. this is one of my favourite ways to make it, with a strong duck broth and simple garnishes 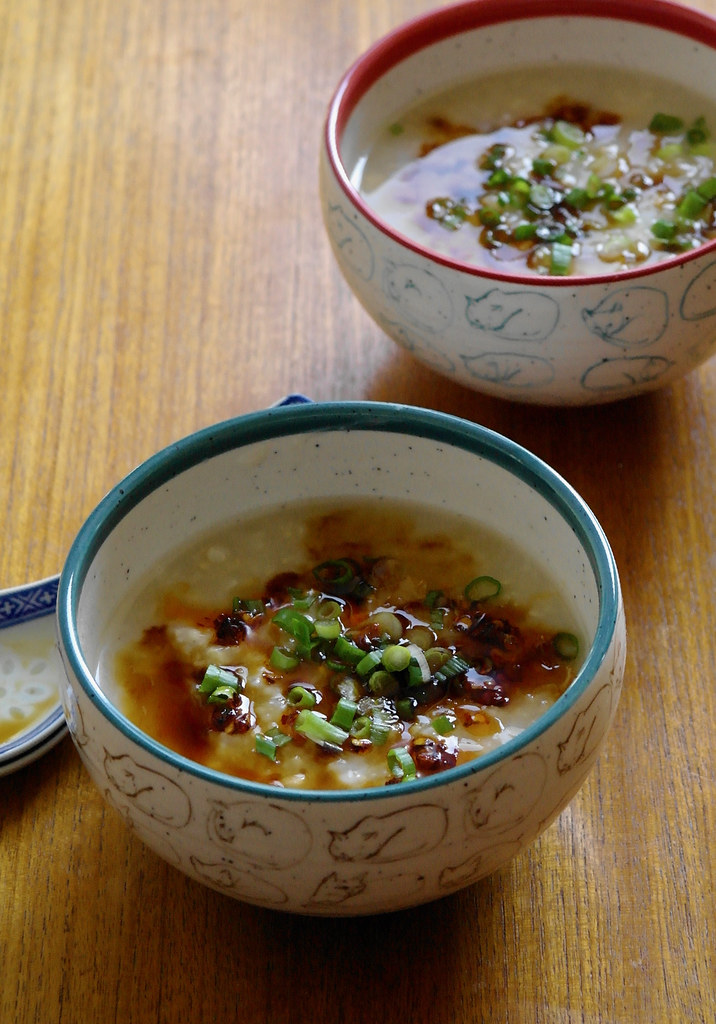 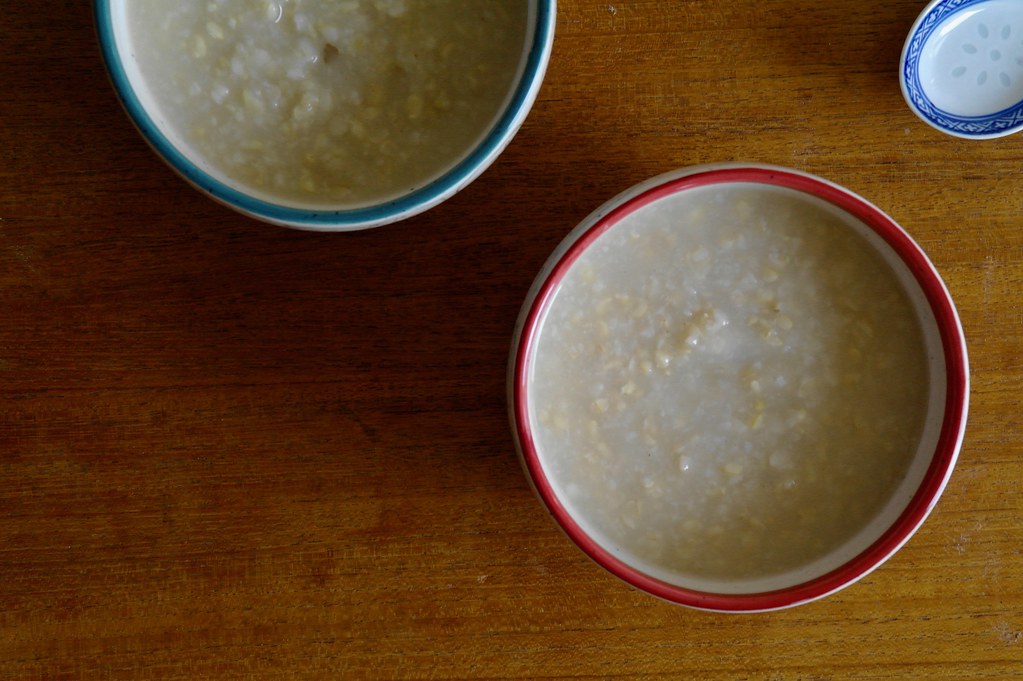 My mum would always make jook (congee or rice porridge) for me when I was sick. The degree of flavour would depend on the degree of sickness; a cold meant a base of chicken broth, whereas a stomach flu would call for nothing more than rice cooked in water with a slice of ginger.

While these blander variants are just what I want when I’m under the weather, my favourite sort of jook is not one I grew up associating with sickness. After buying a BBQ duck, my mum would dismantle it and the the bones, stripped of the meat, would be simmered for a couple hours for a strong broth which made a jook heavy with meatiness and spices and a just a tad bit sweet. 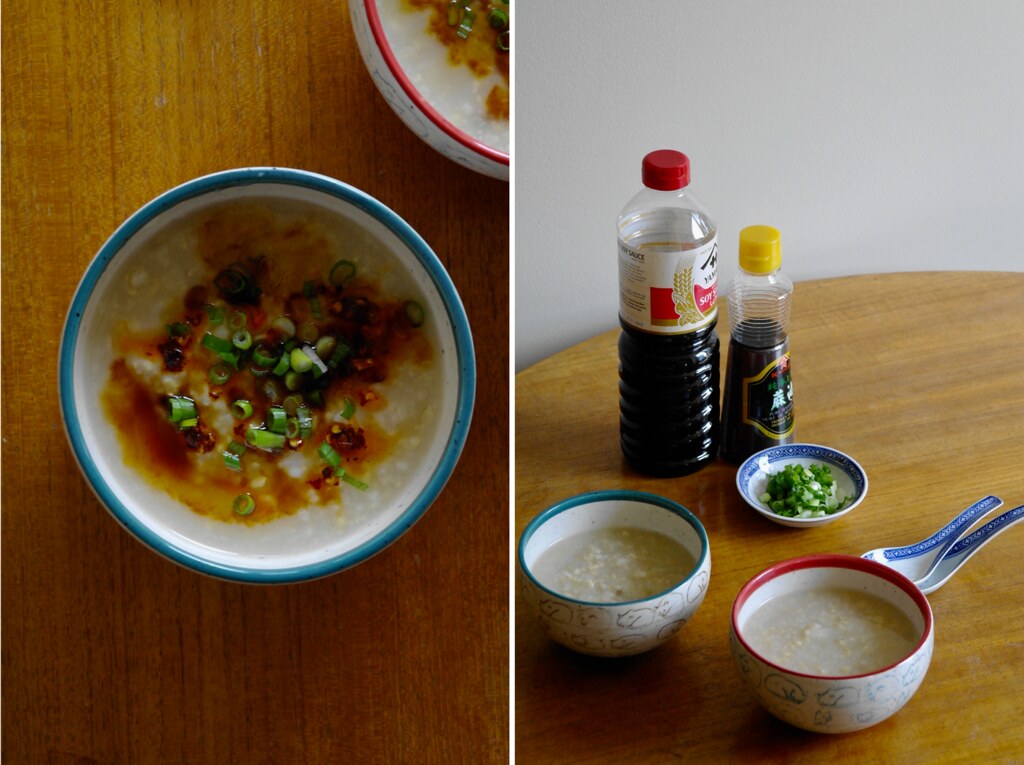 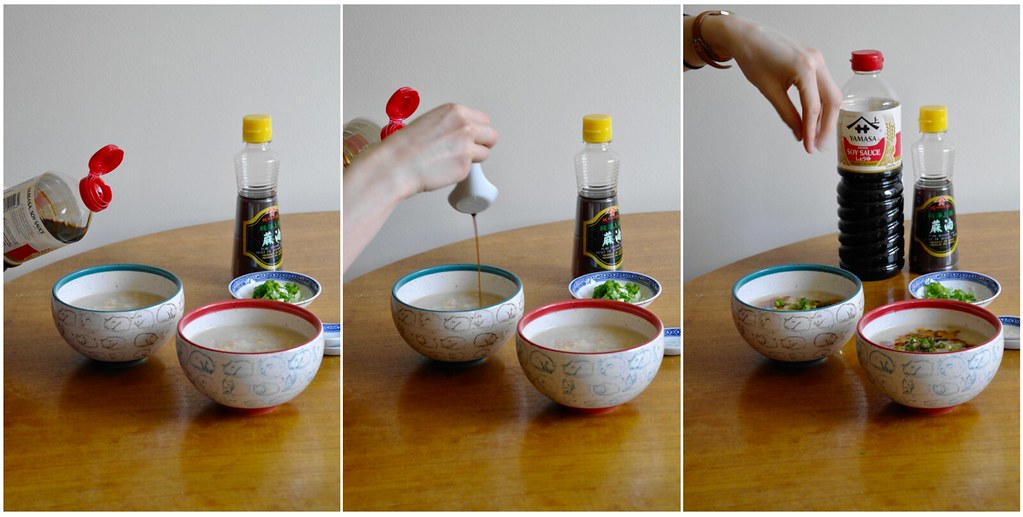 Due to all the flavour in the duck broth, this never needs much on top. We usually keep it simple – soy sauce for salt, roasted sesame oil for aroma, and plenty of finely chopped green onion: the perfect jook trifecta. (Sometimes a bit of chili oil for spice.)

My grandparents like to cook gingko nuts and fu jook (dried bean curd sheets) in their jook, and then stir in a bit of fermented tofu at the table. In junior high school, an art room congee discussion revealed that a couple of my friends liked a sprinkle of brown sugar on top. I like both of these ways, but perhaps because jook is (while feeling sickly or not) a comfort food, I prefer it the way I grew up with it. It’s one of those choices that emerges from the entanglement of sentimentality and memories with taste.

To me, the texture of jook should be rather thin, like a soup that can slip down the throat, rather than the shape-holding globularity of rice pudding or an oatmeal. The grains of rice should have broken down enough to become only half distinct – as it cooks you’ll see a progression from individual swollen rice grains distinct from the broth to a textured velvety thickness.

This isn’t an entirely faithful rendition though; more recently I’ve been making congee with brown rice. It’s not the same, but rather nice in its own way. It is worth a try if you are not as into mushy foods (though I am a self-professed mushy food adorer) as brown rice does have a bit more bite to the grain. 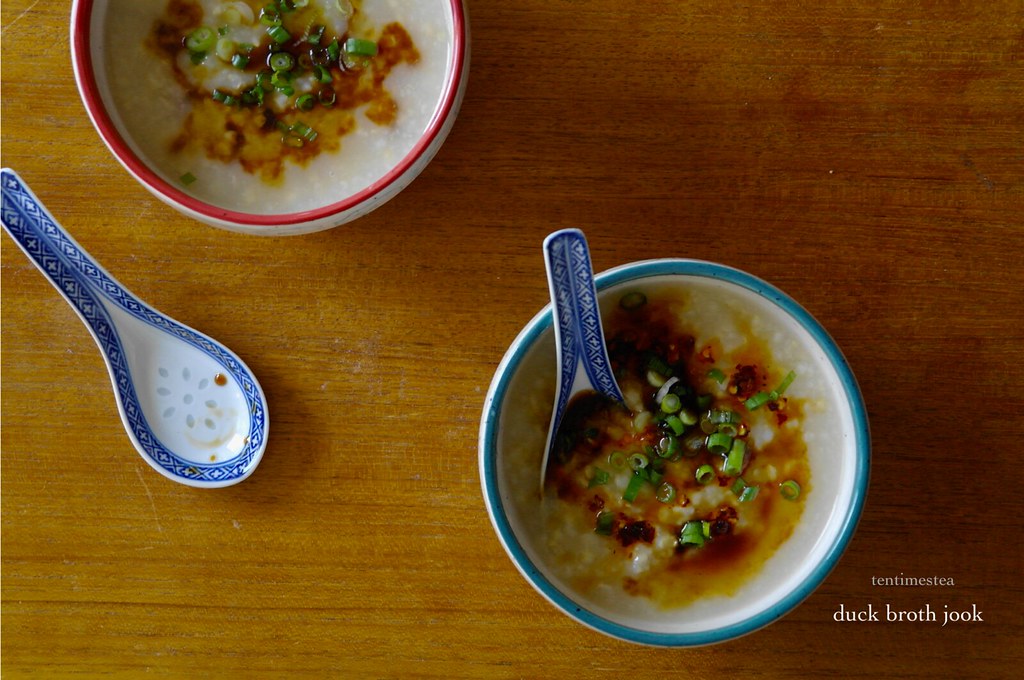 I’ve been eating mostly brown rice lately, so I used that in the jook, but feel free to use white rice for the more usual texture. I find brown rice still holds a bit of its shape and retains its bite no matter how long you cook it. Instructions included for leftover rice because often the jook I make will be cobbled together from all the different small containers of leftover rice in the fridge.

To make the broth, place the bones in a pot and cover with water. Simmer for at least a few hours, then strain, discarding the bones (pick off any leftover meat if you haven’t already!) and reserving the broth.

To make the jook, combine the rice, broth and a few slices of ginger in a large saucepan. Bring to a simmer, cover and let gently simmer away – for uncooked rice, try a couple hours. For cooked rice, it will likely be done sooner. It’s all very vague and non-directive but logical when I ask my mum for advice – if it’s too thin for your liking, boil it down some more. If it’s too thick for your liking, add some more water or broth.

One thought on “duck broth jook”