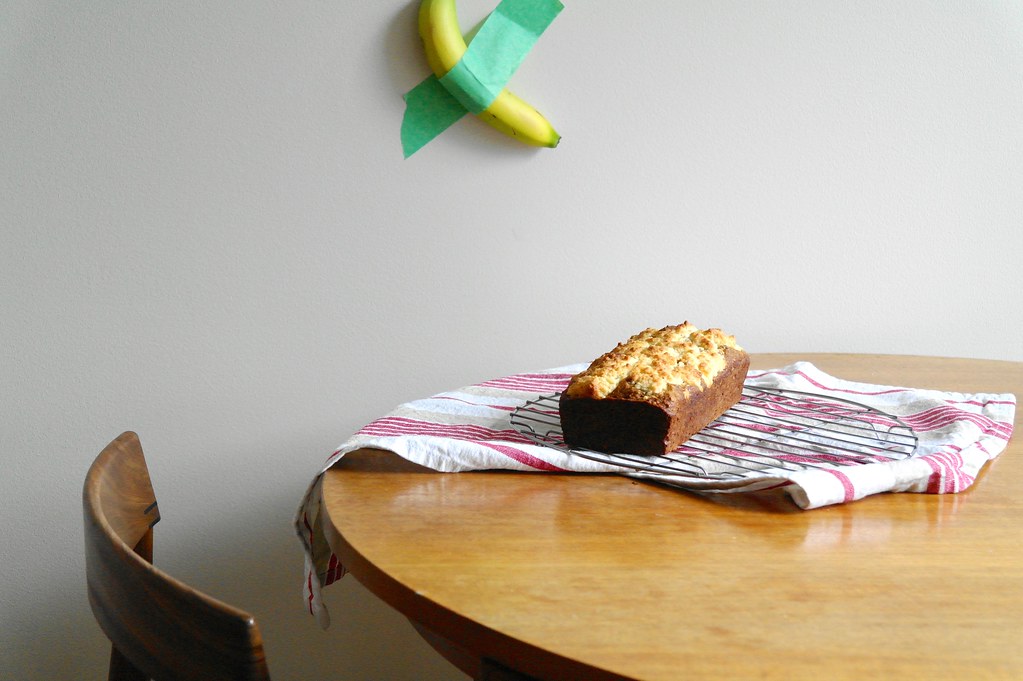 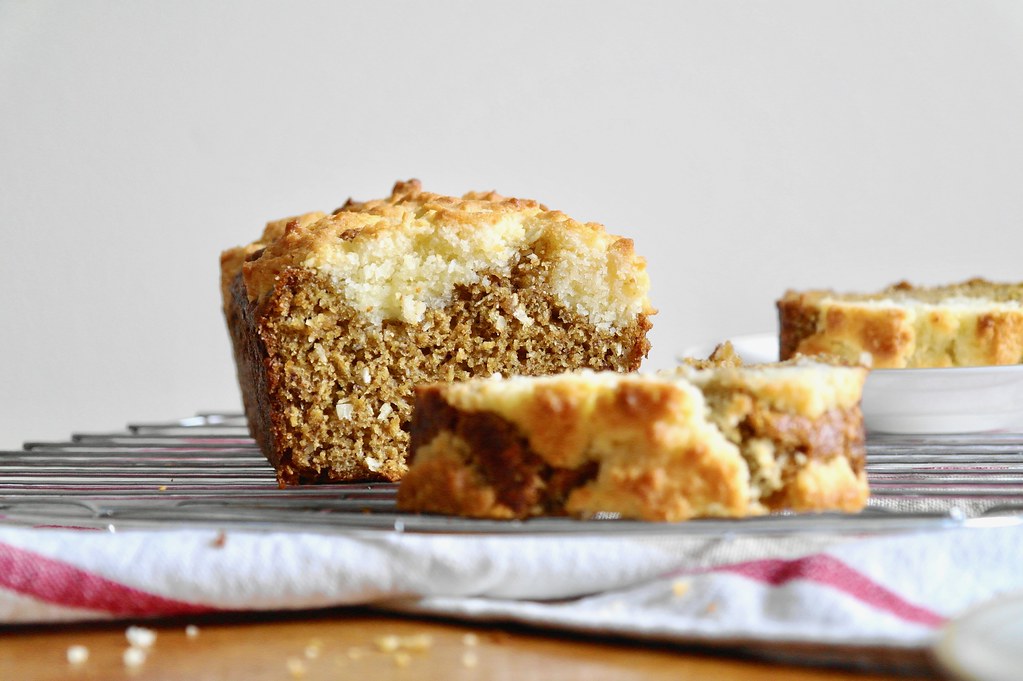 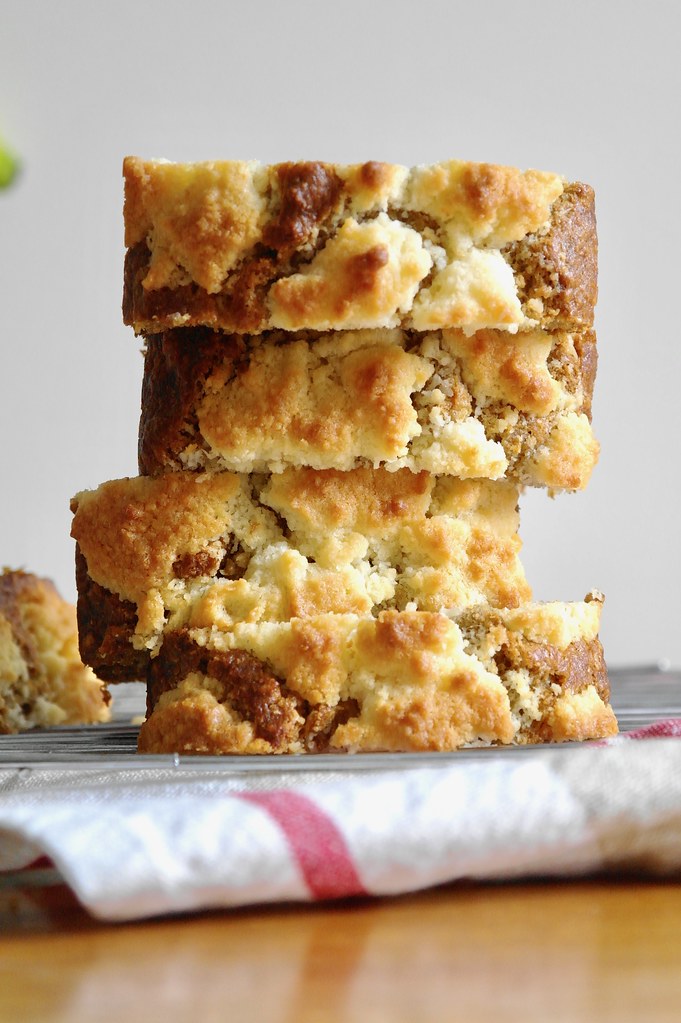 Growing up, I lived vicariously through the menus of far-away bakeries. One time, while randomly perusing bakery websites, I saw a green curry banana bread at milk bar. Since then, on the rather rare occasions I’ve made banana bread, I’ve transposed the combination of Thai green curry paste and coconut from one banana bread recipe to the next until I settled on my current favourite adaptation. Because while I’ve never been too big a fan of banana bread, there are exceptions. For example, an exception flavoured with green curry paste and (this part just began a few years ago, but thank goodness it did:) crested with a crispy coconut fragipane of sorts. 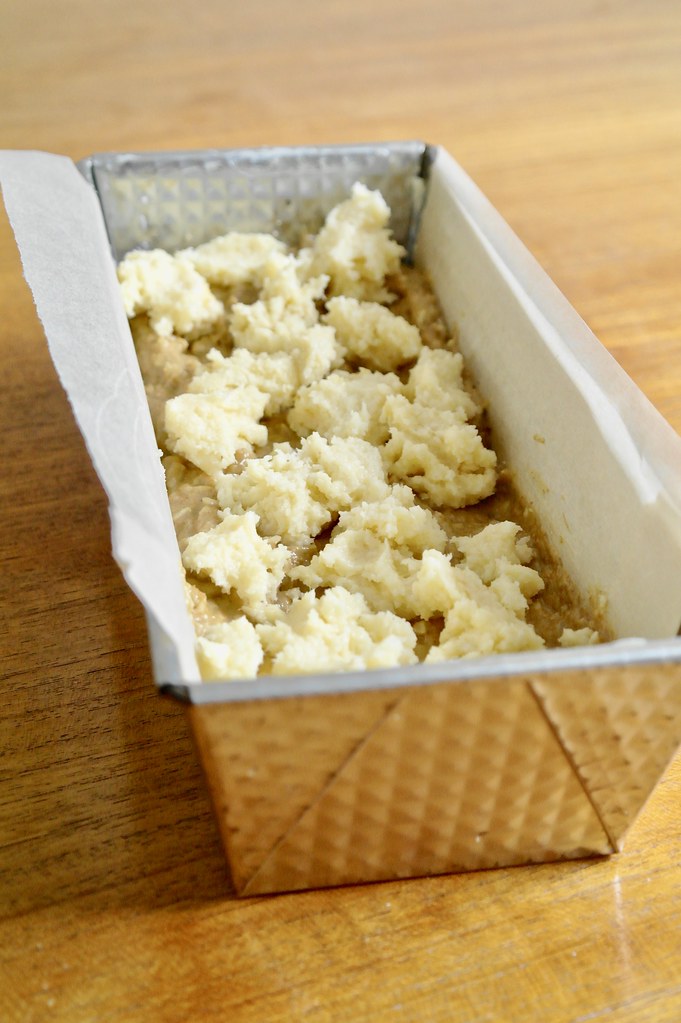 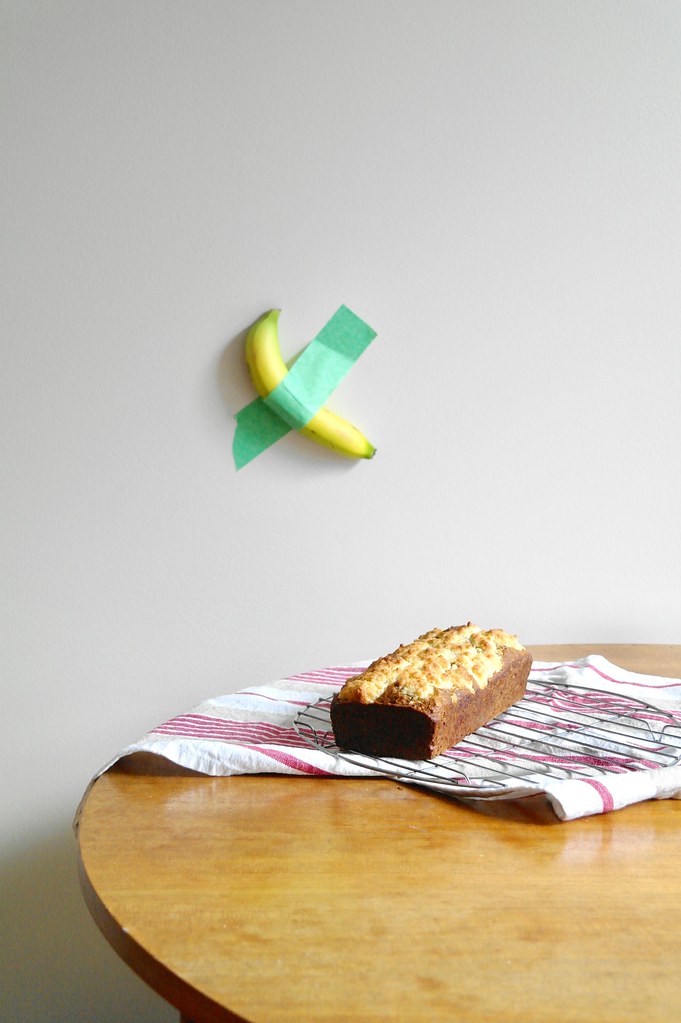 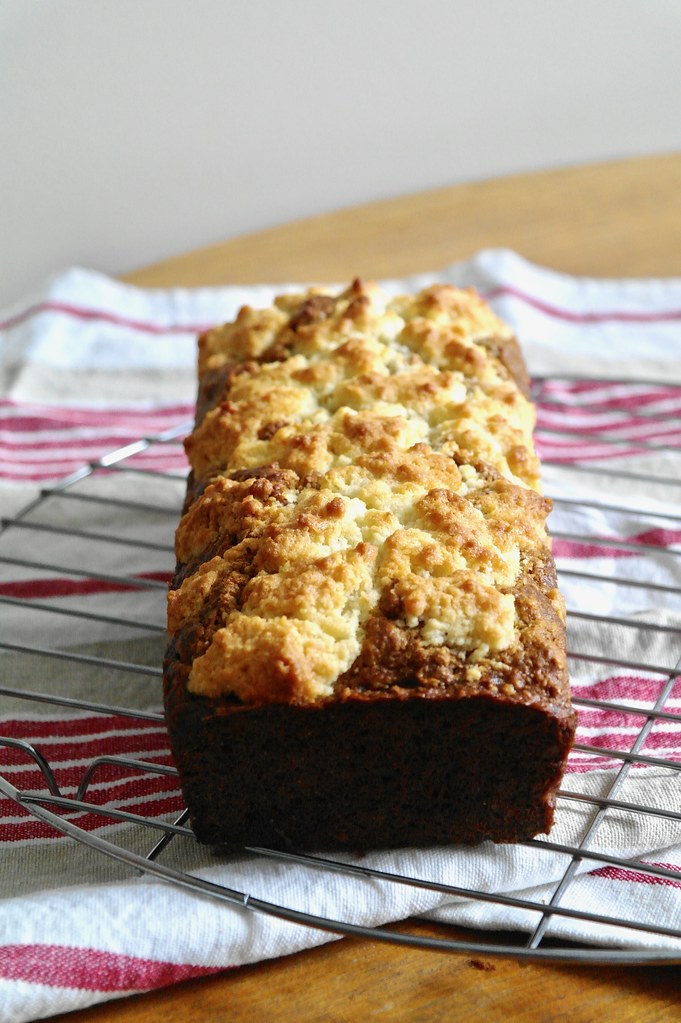 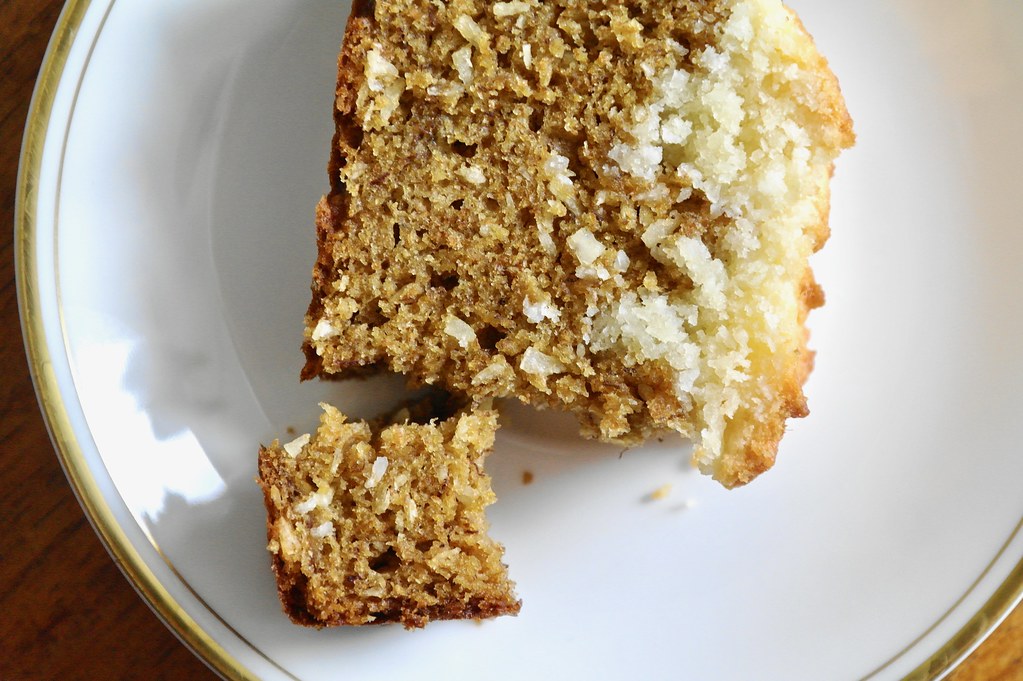 I’ve titrated the curry paste to be just enough to taste and to warm the mouth with each bite. The banana bread itself is on the fluffier and softer end of the banana bread spectrum, which I find a virtue, though still moist.

This coconut “frangipane” has long lost its resemblance to a typical almond cream following random adjustment after random adjustment. Back when I used a more classic-ly ratio-ed recipe, it formed thin, crisp and deeply browned topping, rather like the wonders of choux au craquelin or pineapple buns. The current topping rendition holds it shape, and makes for pockets of coconut rather like the filling to a cocktail bun or coconut tart; as far as flavour goes, this is my preference.

I enjoy it this banana bread most warm. 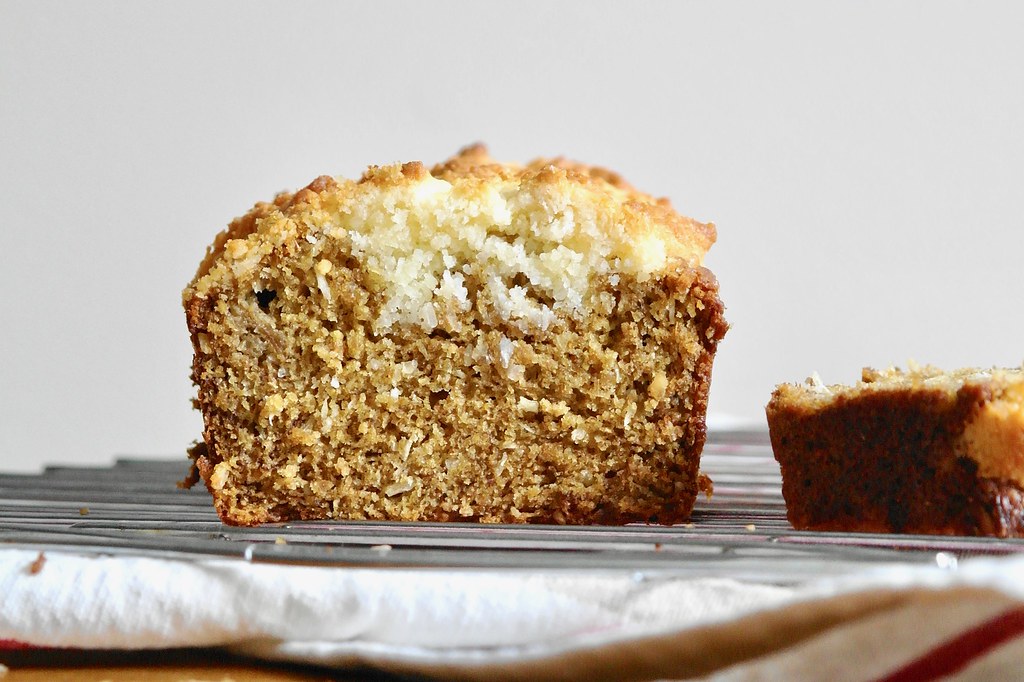 Preheat oven to 350F. Line a loaf pan with a parchment sling and butter the unlined sides.

Place the peeled bananas in a large bowl and mash with a wooden spoon. Mix the melted butter, a bit at a time, into the curry paste to loosen it, and then add the butter mixture into the bananas, stirring until completely combined. Beat in the sugar, salt, cardamom, coconut, vanilla, and egg. Sprinkle the baking soda overtop, being sure to spread it out so as to ensure it doesn’t clump and incorporates evenly. Mix in. Add the flour and mix until just combined. (Alternatively, you could mix your baking soda into the flour but I find this way a bit quicker and easier! Less bowls to wash!)

Scrape the batter into the prepared pan. Dollop blobs of coconut fragipane over top – don’t worry if the cake isn’t completely covered.

Bake for around 40-45 minutes or until an inserted skewer comes out with crumbs attached, not batter. Gently remove from the pan and place on a wire rack. Let cool at least 15 minutes or so before slicing.

(An example of my incoherent banana bread recipe development process from years ago is illustrated below. Now that I have a blog, at least typing lends a bit of legibility!) 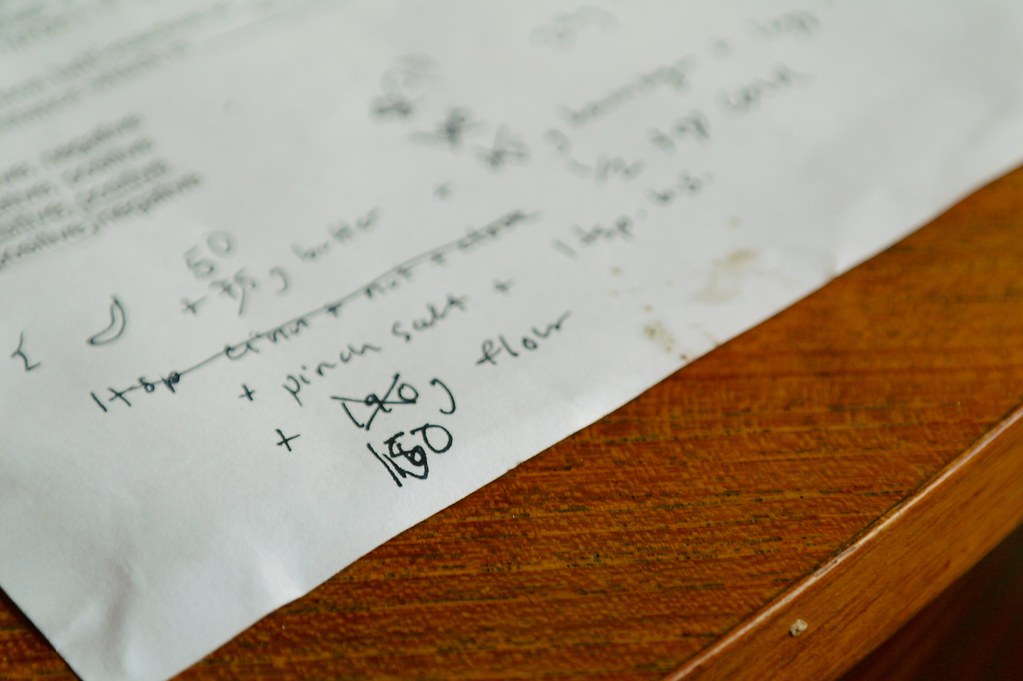