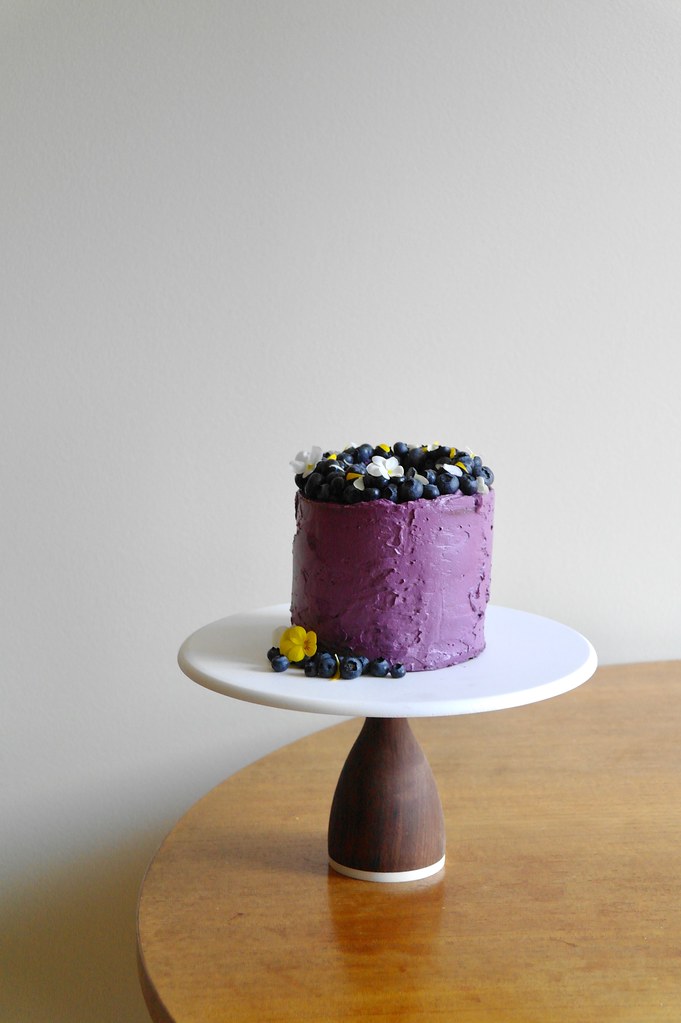 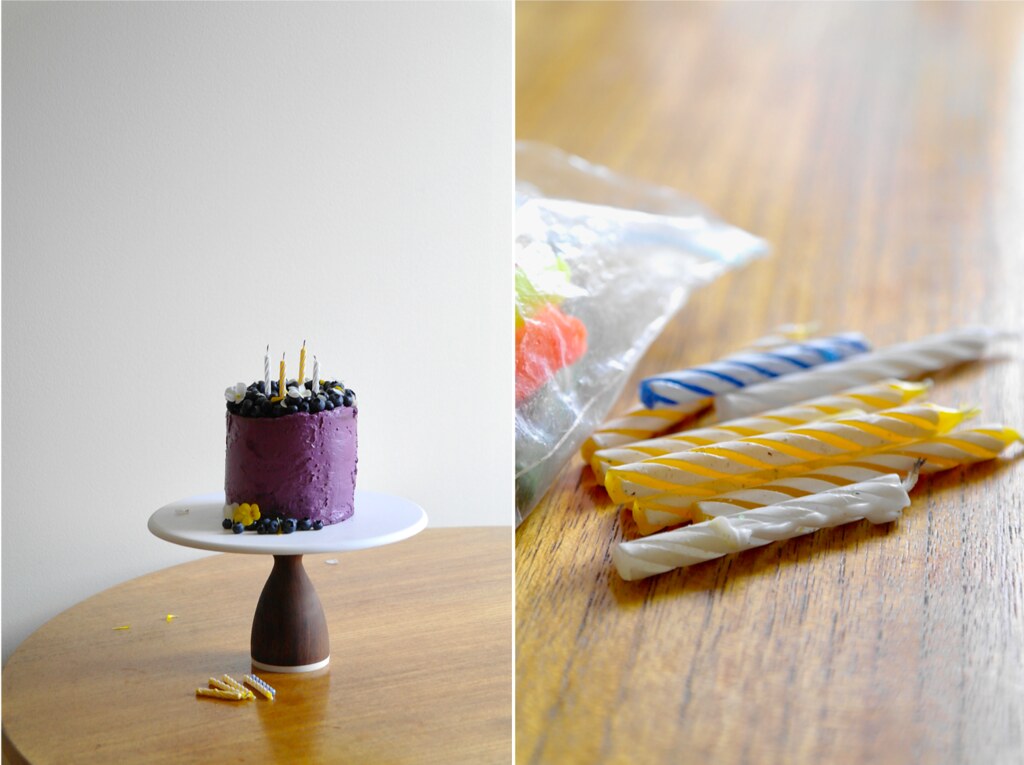 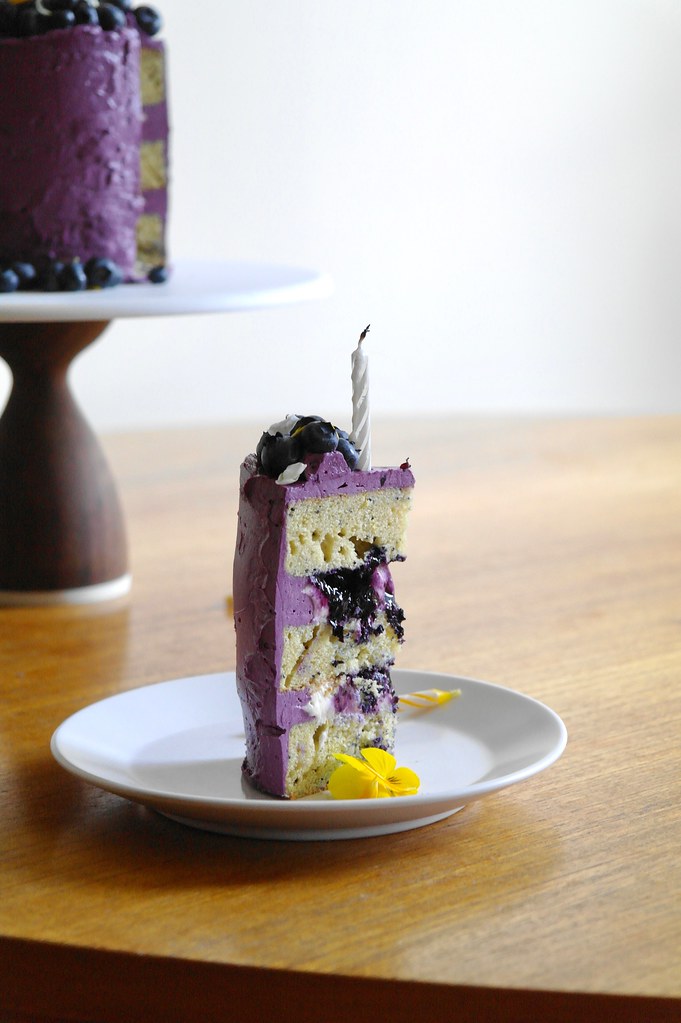 Currently in Toronto there is motion that has been put forth by Councillor Josh Matlow and seconded by Kristyn Wong-Tam to reduce the police budget by at least 10% and invest in community resources. Mayor John Tory then submitted his own motion (which as mayor, appears directly on the agenda) in order to bypass defunding of the police, taking the sympathy of councillors that may have otherwise supported the motion to defund. Unfortunately, this is not an acceptable compromise and one that will likely lead to an increase in police budgets if body cameras are implemented. Read Anthony Swan’s breakdown of Tory’s motion here and act now by referring to his page here.

Again and again advocates have been hitting a wall of reluctance to defund the police by those in political power. Why do people have such differing opinions on defunding the police? I found one answer articulated by Sandy Hudson’s (co-founder of BLM Toronto) article in the Huffington Post –  much of it has to do with different communities have fundamentally different experiences and relationships with police, first of all in the quantity of interactions, and secondly in the nature of those interactions. 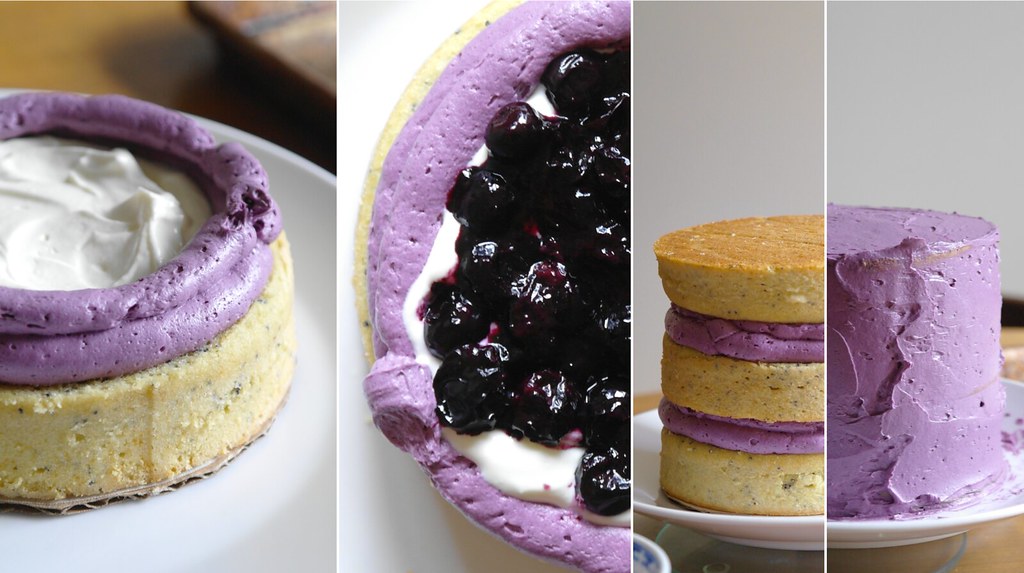 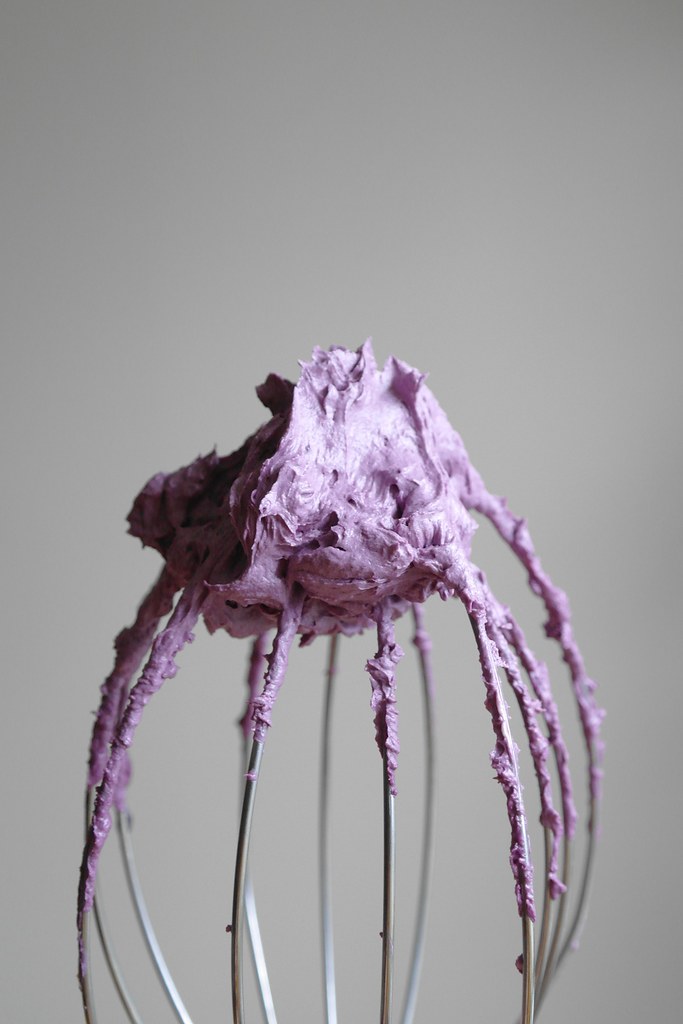 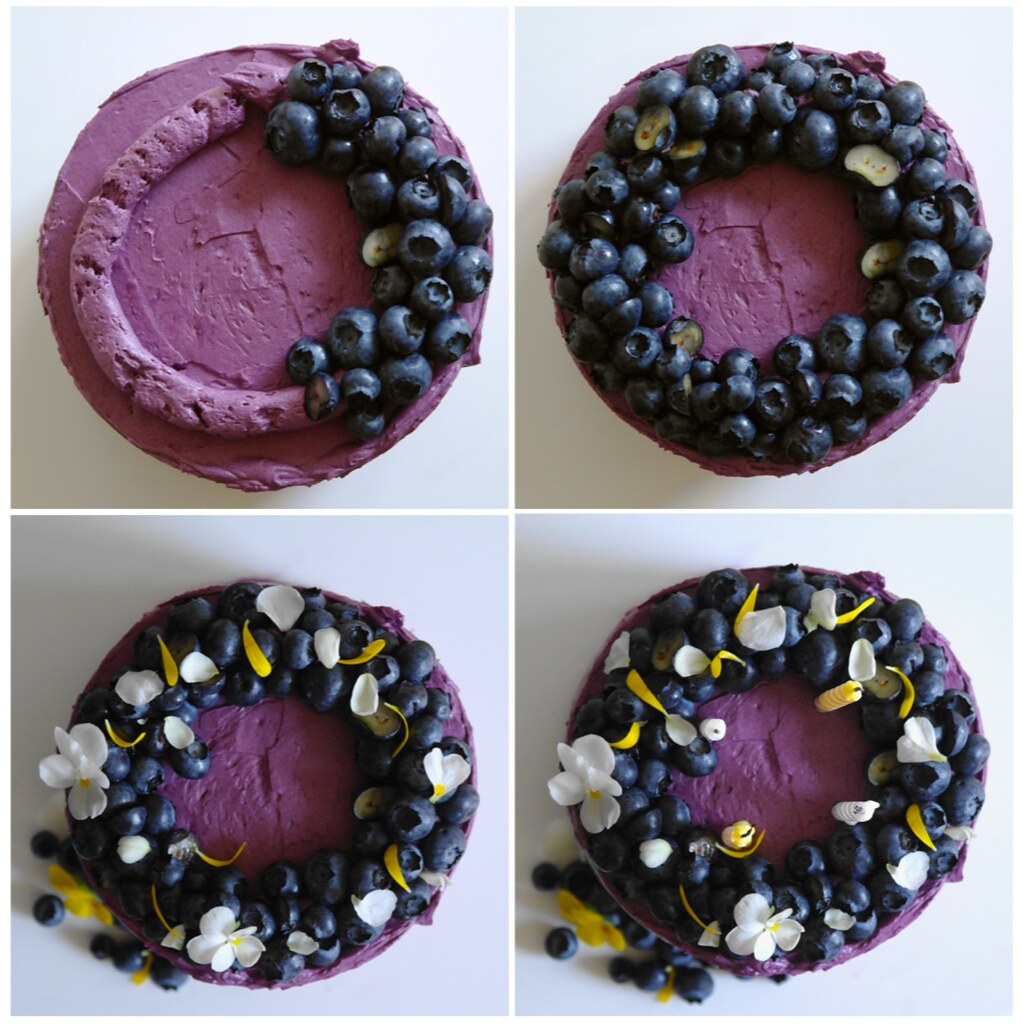 As Sandy Hudson describes: “Black communities interact with police regularly because we live in neighbourhoods police target. We are experts in the ways that police can brutalize and inflict violence upon us. Their presence is no assurance of safety in Black communities. This is often true for Indigenous communities and communities living in poverty as well.[…] Wealthier, non-Black, non-Indigenous, privileged communities tend to feel safe because they have a rarely used option to call the police when they feel their safety is threatened. But, they are generally not interacting with police; their communities are not policed in the same way, and they are not targeted for criminalization.”

I belong to the latter category – I’ve have had barely any interactions with police and they have not been threatening in nature. I was brought up to think of police as an institution creating safety and protection, a concept that my personal experiences have not refuted. On a daily basis, I don’t see the massive and threatening presence police play in some people’s lives. I don’t experience the fact that police bring the complete opposite of safety to some communities. If you, like me, have few interactions with police, it can be hard to understand the experience of others and why for them, police are dangerous.

Given different people have such dramatically different experiences, I believe that truly understanding their experiences is not a prerequisite to support defunding the police. Rather, let us set a lower and much more logical bar: we just need to know and believe what we have been told for years.

As Sandy Hudson writes: “Defunding the police can free up funding that we can reinvest in services that provide real safety for both kinds of communities. The communities that are constantly exposed to police violence should not be deprived of effective safety and security services simply because more privileged communities feel safer when calling the police is an option.” 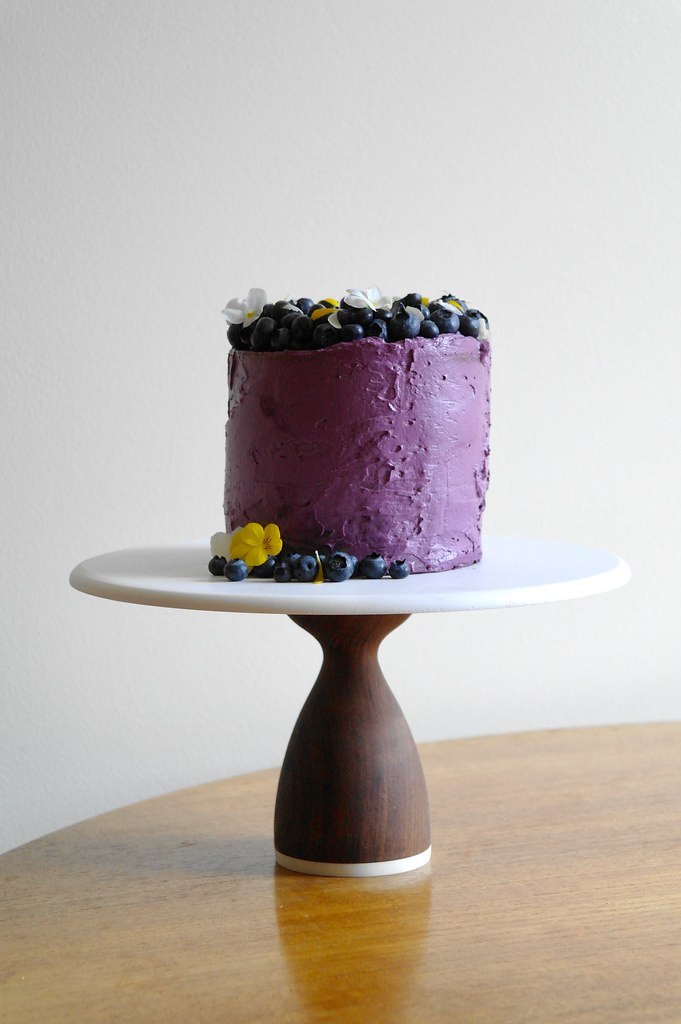 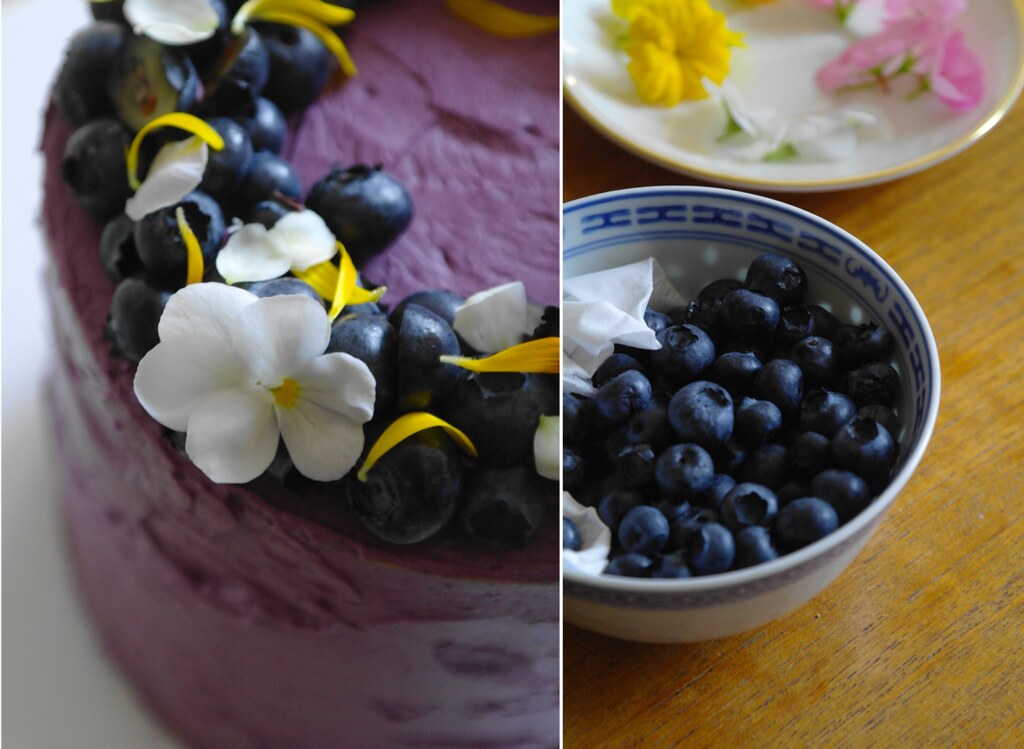 People saying they “don’t believe” or don’t understand or dismissing defunding as a “fantasy” cannot be accepted as a valid argument without recognizing the limitations of their world views. Not understanding is not an excuse to ignore the demands of those who know the most what needs to be done – and this is why we must support advocates from the communities most affected who are calling to defund the police.

One last quote from Sandy Hudson: “Let’s not be constrained by an inability to imagine a system beyond the one that currently exists. We can do far better than the institution of policing to create safety for all of us. It’s high time we did so.”

Here’s an excerpt from my own letter which I had sent earlier before Mayor Tory presented his motion – but I’ll be spending tonight writing a new letter to address the new motion. I found that part of the 2014 Independent Review by Justice Iacobucci can be interpreted as essentially talking defunding/abolitionist reforms, though in different terms than advocates.

“To illustrate the devastating results of the expanded role that police play in our society, I’ll point to the example of mental health. The deaths of individuals such as Sammy Yatim [new edit: and most recently D’Andre Campbell, Caleb Tubila Njoko, Regis Korchinski-Paquet, Chantel Moore, Rodney Levi and Ejaz Choudry] have demonstrated that police are not the best equipped to respond to mental health crises. Unfortunately given that there is a lack of widely available alternatives, police have become the first responders to people in crisis.

In a 2014 independent review conducted by the Honourable Frank Iacobucci for the Toronto Police Services, he wrote “[a]s a society, by choosing not to provide adequate care for mental illness, we risk criminalizing mental illness.” Justice Iacobucci also acknowledged that the real solutions lie in developing community supports, not in policing. For instance, improving access to mental health care, access to community and hospital-based crisis services, supportive house, and anti-stigma policies among other services can all reduce the interactions of these individuals with police and avoid fatal interactions altogether. In other words, we must switch from investing in policing to investing in our communities.

I am aware that policing reforms are being discussed, but as described in a 2017 Office of the Independent Police Review Director (OIPRD) report, many reform recommendations have already been made and apparently implemented. Despite that, incidences continued to occur, leading family members of those killed by police along with the former chair of the Toronto Police Services Board, Alok Mukharjee to question whether “reform” is enough.

Simply put, prison and law enforcement do not solve mental health concerns, drug use disorders, poverty or homelessness (all of which are in some capacity currently dealt with by the police). And as the scope of policing expands, so does its ability to criminalize vulnerable populations and racialized folks. What we need to save lives is divestment from the police to allow for investment in community supports.

I urge you to refer to organizations such as Black Lives Matter Toronto, Not Another Black Life, the Latinx, Afro-Latin-America, Abya Yala Education Network, the Toronto Prisoners’ Rights Project, Urban Alliance on Race Relations, Black Health Alliance and Jane Finch Action Against Poverty among many others. These are the organizations who have been advocating, sometimes for decades, around these issues. Many members have been living the realities of racism and violence and know firsthand what needs to be changed and how to make our city safer for everyone.” 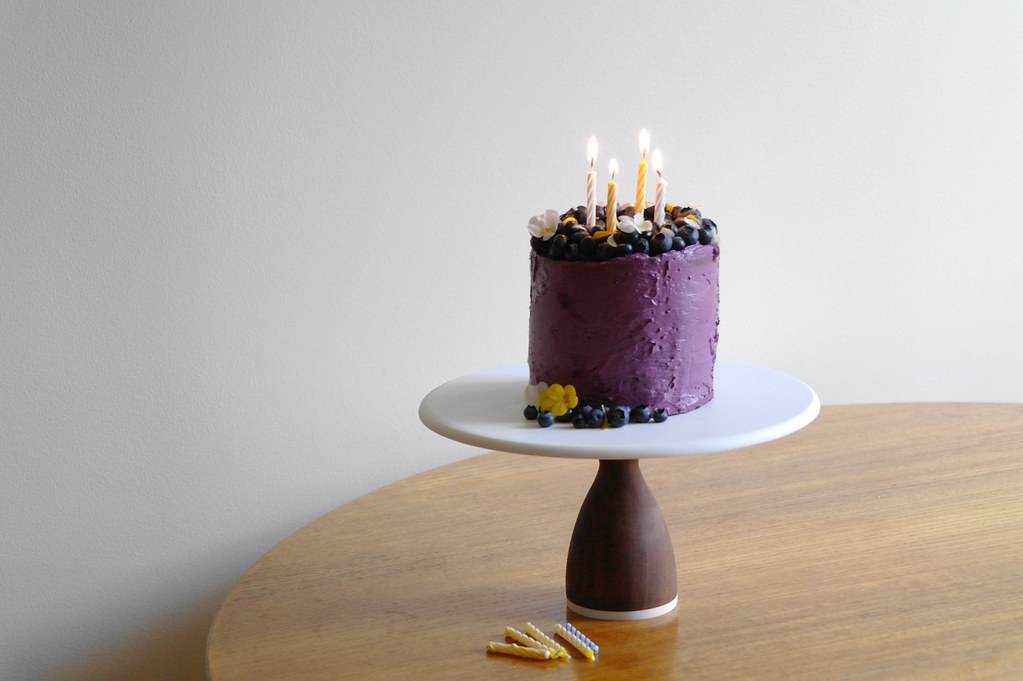 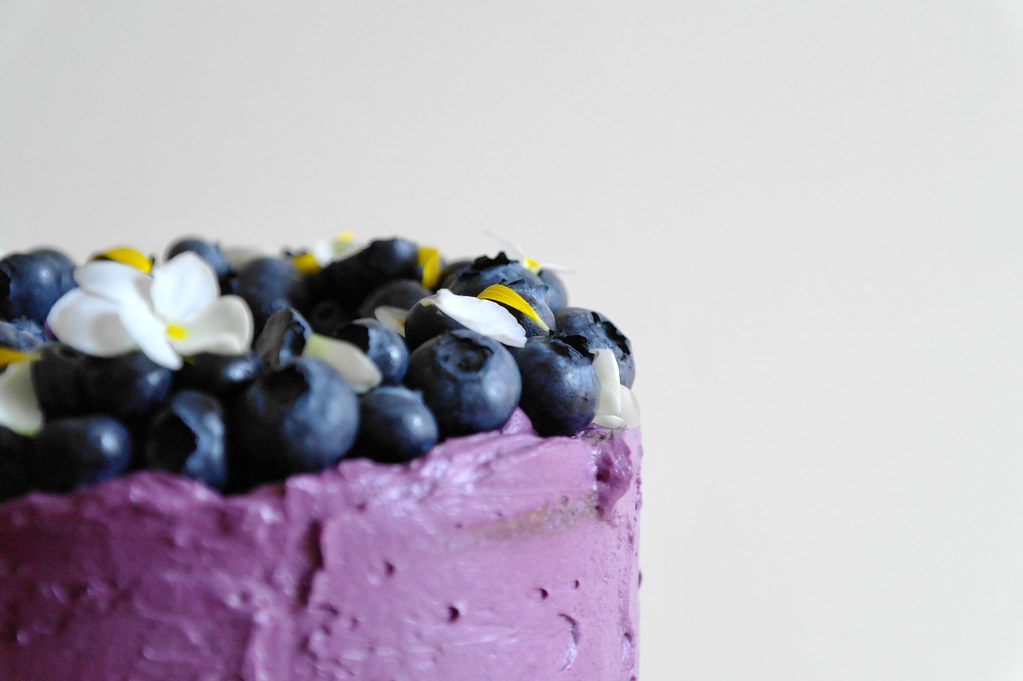 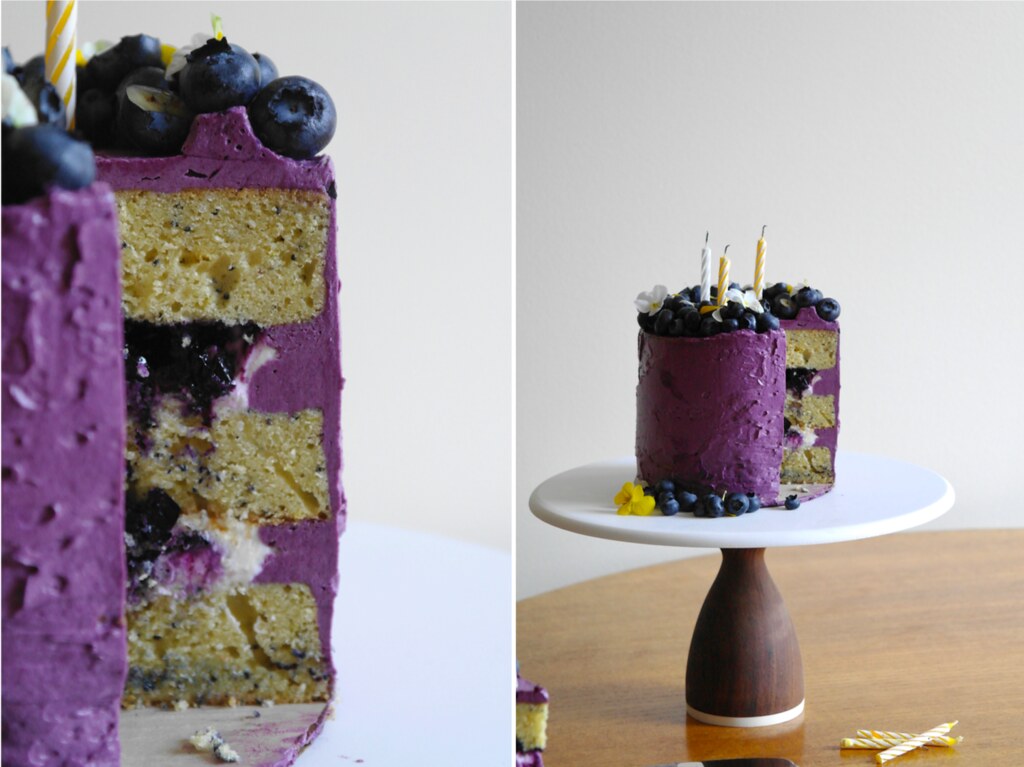 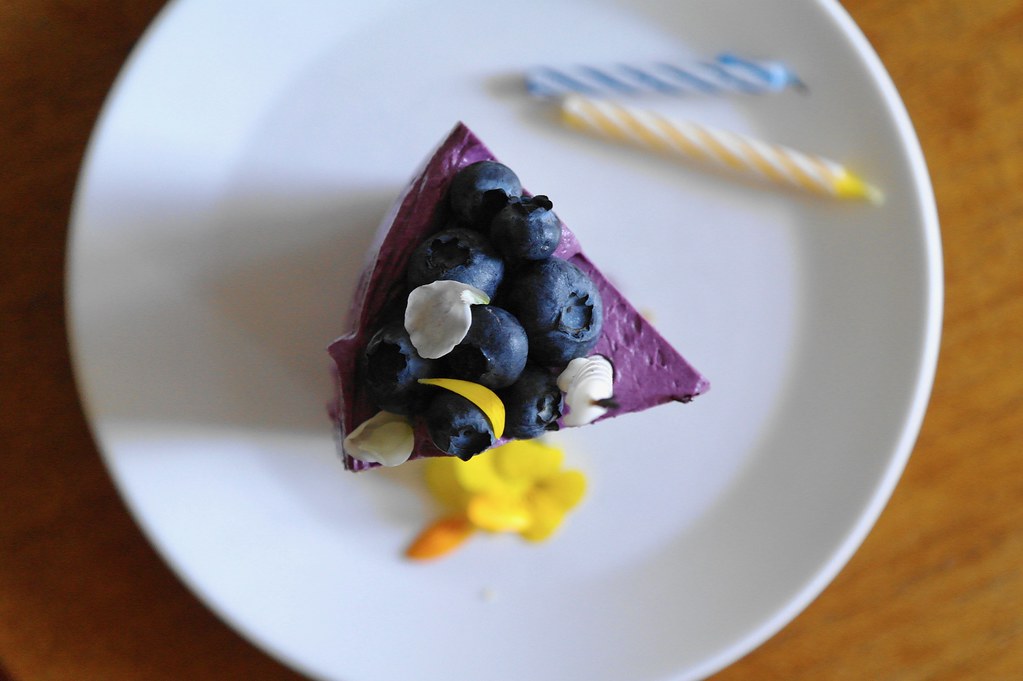 Have you noticed that I (very subtly) hinted that there was a cake recipe throughout this blog post? I’ve been experimenting more with low-sugar ermine frostings and can say that I officially now love frosting. This is a cake I made last summer with the intent of minimizing the sugar as much as I could to suit the health needs of my relatives. It’s rich but only lightly sweetened, with as much blueberry as I could cram into it. 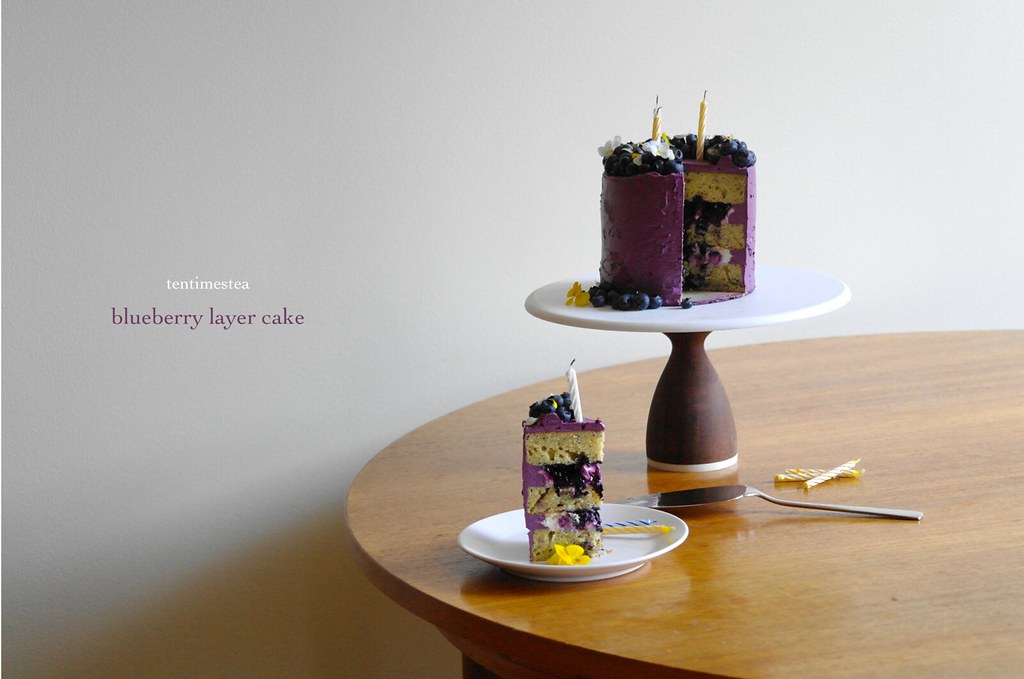 Makes one 12cm (5″) triple-layered cake… I did feed 7 very full people with it and had a half slice worth of leftovers – make of that what you will.

To make a base for the cake, I taped a round of parchment paper to a round of cardboard, each cut according to the 12cm cake ring used to bake the cakes. This is handy to do if you’re assembling the cake on a turntable and need to then transfer it to a cake stand – if you’re assembling on the serving plate, then it is unnecessary (rather, tuck strips of parchment paper under the cake to keep the plate clean and remove them once you’re done frosting).

Trim the domes off of each cake layer to flatten.

Transfer about half a cup of icing to a pastry bag fitted with a large round tip (I used Wilton 2A). Set aside the remainder.

Place the first cake layer down. Pipe a ring of icing to hold in the filling – as I wanted to pile my filling quite high, I piped a second, thinner ring of icing on top of the first to add height. Spread some of the cream cheese filling within ring of icing, spreading it to about half the height of the icing ring. Fill in the remainder with half the blueberry compote.

To decorate, use the rest of the icing in the piping bag to pipe a ring on top of the cake, set 1 or 2cm in from the outer edge. Arrange blueberries along the ring of piped icing. Dot with flowers and petals.

As the cake and icing are butter based and become harder at fridge temperature, I recommend removing the cake for an hour or two to warm up a bit at room temperature – though a warmer cake does mean softer icing and a bit more difficult to slice as the filling is quite soft in this one!

Cream the butter and sugar until light and fluffy (3 minutes on high with a stand mixer and whisk attachment). Add the eggs a bit at a time, beating in until incorporated, and then the vanilla extract.

Add the flour, mixing in with a rubber spatula just until incorporated. Add the milk and whisk in. Split amongst the three cake rings/pans and spread evenly with an offset spatula.

Bake for 12-15 minutes or until an inserted wooden skewer is removed clean. Rotate halfway through baking and be sure to test all three layers in case your oven has hot and cold spots.

For blueberry preparation, combine 180g of blueberries with about a 1/3 cup of water. Heat over medium high until bubble and then let simmer away for around 10 minutes or more, until all the blueberries have popped. Transfer the mixture to a jelly bag – beware, if your jelly bag was not already purple, it will be now – and set in a strainer over a bowl. Let the juice drain. Once it has cooled, you can squeeze all the remaining juice out. Measure the juice – you want 115g. If you have quite a bit more, transfer it back to a small saucepan (or even use the microwave) to reduce the juice down. If you don’t have enough – I was aa bit short – top up with some strongly brewed chamomile tea

For the frosting, transfer the blueberry preparation to a small saucepan. Whisk in the flour, place over medium heat and cook until thickened, around 2 minutes. Whisk in the sugar until dissolved. Let cool until room temperature.

Beat the butter in the bowl of a standmixer with the paddle until light, around 5 minutes. Beat in the cooled fruit mixture, a spoonful at a time. Scrape the sides and bottom of the bowl to ensure everything is fully combined. Switch to the whisk attachment and whip until light and fluffy, a few minutes. 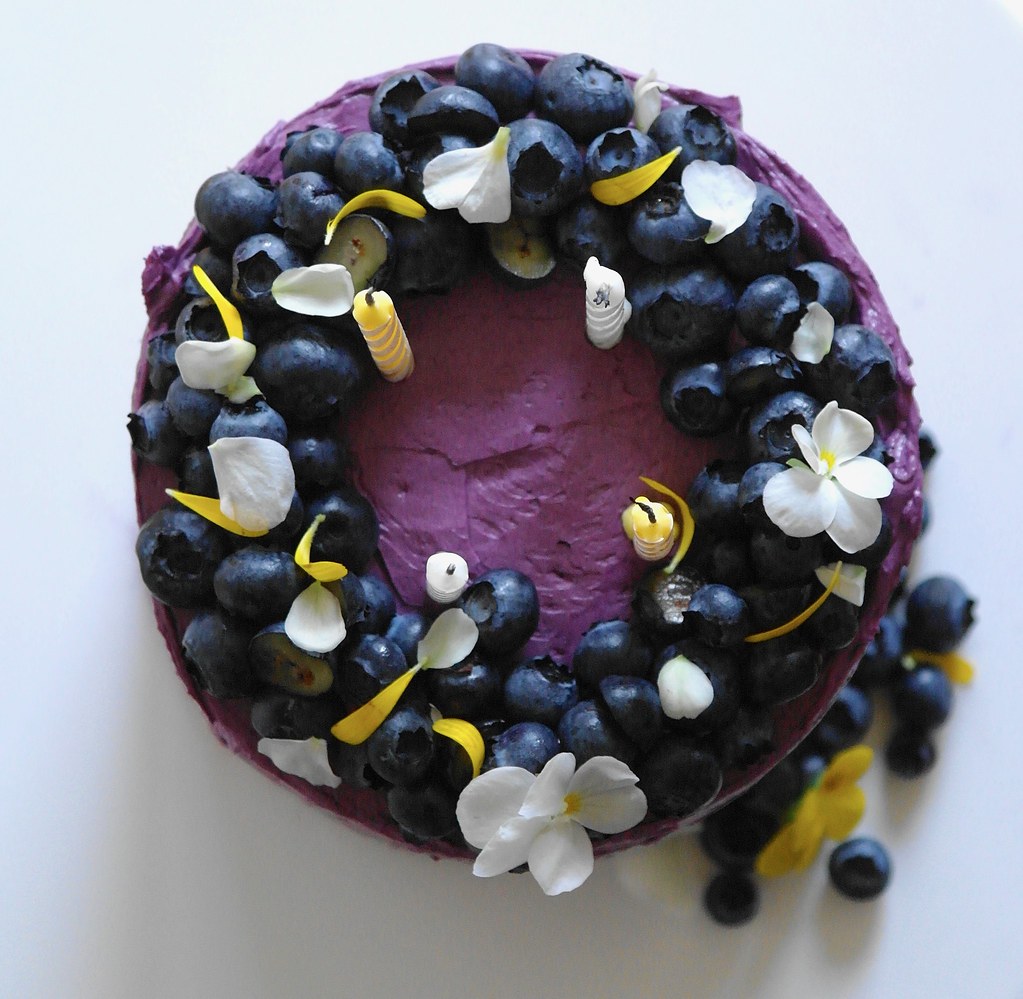