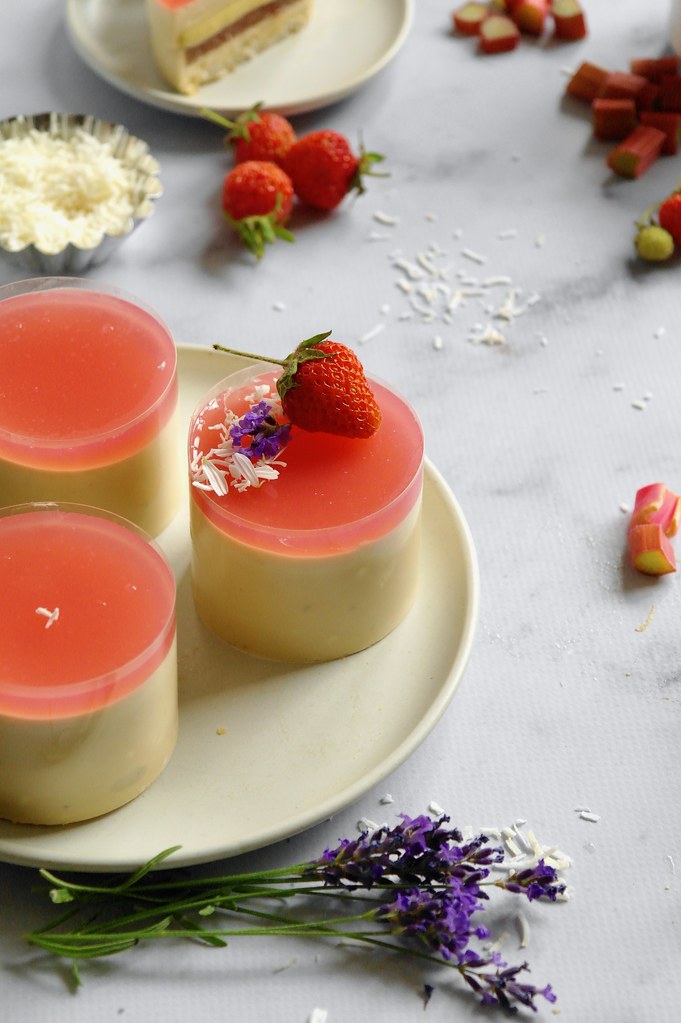 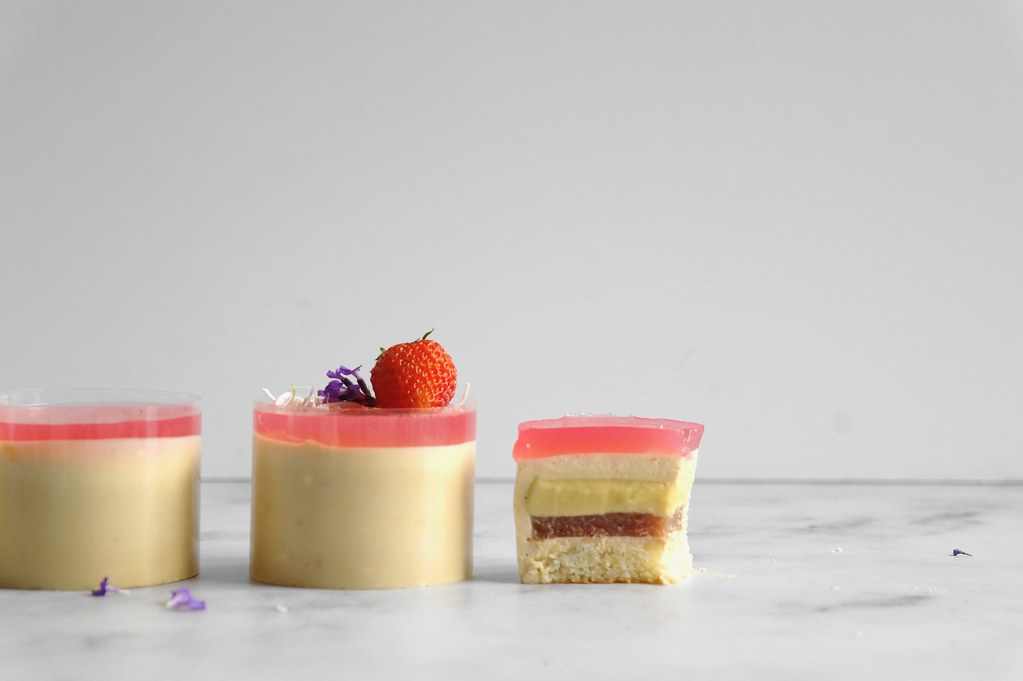 It didn’t feel all that long ago that the blog had hit the five year mark. Now apparently it’s six!

Last year I effusively pledged my undying love for baking. Previous years, in awe that my blog was somehow still around, I expounded on all that I had learned (blog-wise, that is) and constructed ambitious plans for the future (blog-wise as well, that is). But having crossed the five year mark last year, I think I’ve reached the age at which individual years no longer feel as significant. It’s a rather comfortable state to be in, actually.

At this point, blogging has taken on a routine and easy familiarity. While I may not always have time in my life for the recipe testing/photographing/editing/writing that goes into it, by now I’ve learned (after a number of nearly year-long casual hiatuses) that that’s fine. While sometimes not much may change here, it’s hardly going anywhere. (And I still have 70+ drafts lolling about in various stages of completion so there’s usually some content I can dredge up even when I don’t have time for baking).

Over the past year I had been experimenting (with varying and low levels of success) with mousse cakes. I decided to give a mousse cake format another go for the annual rhubarb blogiversary cake.

I combined two similar pairings of tart-fruit + warm-fragrance in one: rhubarb+vanilla and rooibos+coconut (which then equals this rhubarb-vanilla-rooibos-coconut cake; the vanilla, forever rendered as a wallflower, dropped from the title for brevity.)

I have a few strips of stiff acetate which I’ve been coveting and been unable to make myself use. I decided to finally use them for this cake – a measure which would also allow me to escape mirror glaze (the step which I inevitably mess up every time…). 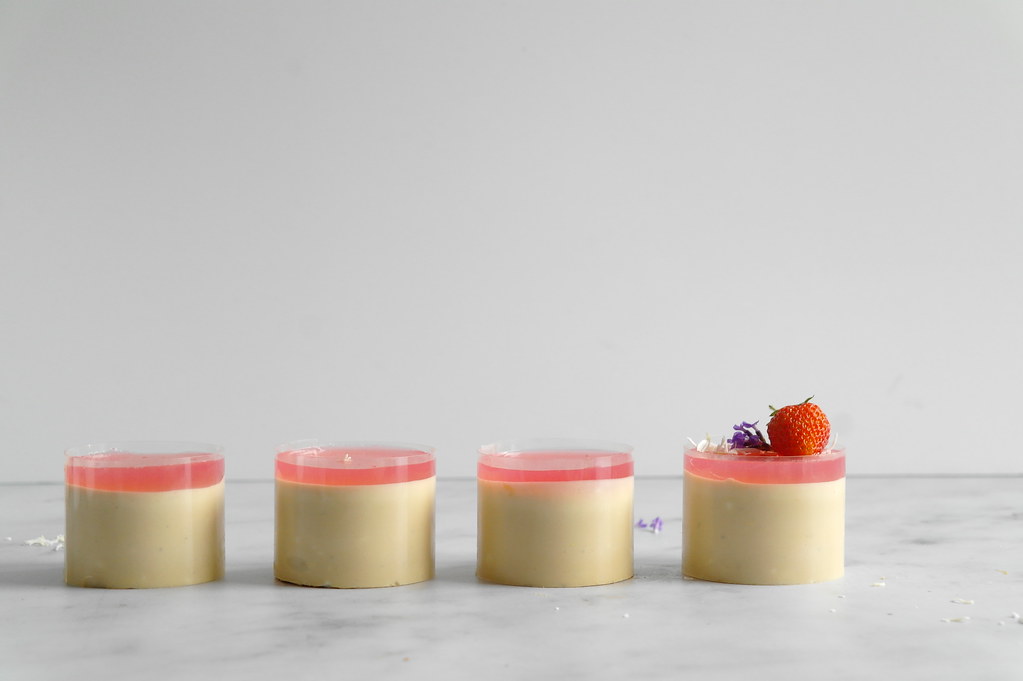 The cake is built on a sweet, chewy and delightfully coconut-flavoured financer. I made it by replacing the ground almonds with coconut, and toasting coconut milk powder along with the milk solids while making the browned butter. The recipe produces plenty of extra – cut it up into squares as a snack.

The insert has two components: a vanilla rhubarb jam (which was initially quite a decent pink, but seemed to have dulled over the freeze and thaw – for better colour perhaps add some strawberries) and a coconut and caramelized white chocolate cremeux for direct juxtaposition of tart and creamy.

The surrounding mousse is based on my favourite tea latte flavour – vanilla rooibos. And then on top: a rhubarb jelly, the colour of which rarely disappoints. 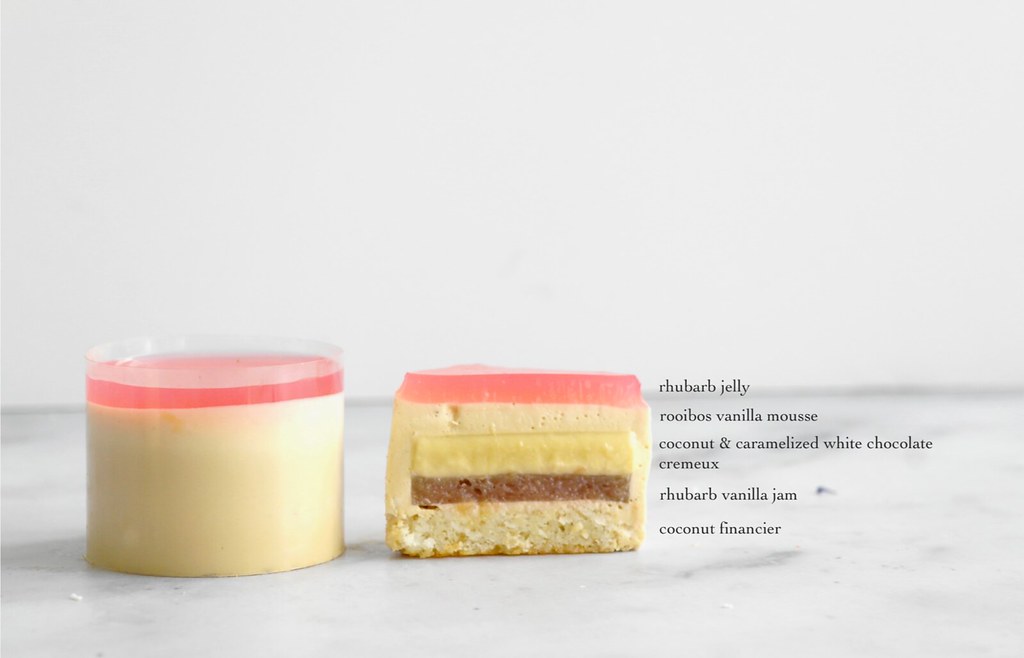 The upsides of this cake? I find the overall flavour combination quite fun – there are tart elements, but they are tempered by plenty of milk, cream and the mellow fragrance of vanilla and coconut. In particular, my favourite components have to be the coconut financier and rooibos mousse! The low point of the cake is probably the rather drab colour profile once you get past the rhubarb jelly, which does tend towards the neon in comparison to the rest of the cake.

As for the acetate – I found parts of the jelly and the mousse stick to the plastic, leaving some ragged edges after its removal. Hence these cakes are best served in the acetate so people can destroy it themselves and save you the emotional pangs of loss. In the end, despite the convenience of acetate, I prefer making mousse cakes without – which is also good as I’m almost out!

(Oh and I did not suddenly obtain a marble countertop – this is a picture of marble printed on vinyl! If you look closely you’ll likely be able to see a slight vinyl weave pattern, but overall I think it does a rather good job!)

This will be layer 1 of the insert. Have six 5 cm rings ready – stretch a piece of plastic wrap into taut over the bottom of each one and place on a pan.

Place the rhubarb and sugar together in a small saucepan along with a splash of water. Split the piece of vanilla pod, scrape out the seeds and add both the seeds and pod to the jam. Cook together until the rhubarb breaks down. Weigh the resultant jam – I had about 103g. If you have quite a bit less, add a bit of water; if quite a bit more, cook down some more. Pulse the mixture with an immersion blender to make smoother.

Melt the gelatin in the microwave and then whisk into the warm jam mixture. Distribute the jam amongst the six rings and tap the pan to level.

Place in the freezer.

This will be layer 2 of the insert. Whisk together the coconut milk, heavy cream, egg yolk and salt in a glass bowl and set over a pot of simmering water. Cook, while stirring with a rubber spatula, until the mixture thickens or reaches 160-170F. Add the bloomed gelatin and stir until it is melted in.

To unmold the insert, soak a towel in hot water. Wrap around the outside of a ring for about 5-10 seconds, then loosen the plastic wrap and push out the frozen insert. Return the inserts to the freezer until ready to assemble the mousse cake.

Preheat the oven to 425F. Line the bottom of an 8 or 9″ square pan with parchment paper and butter the sides.

Place the butter and powdered coconut milk (if using) in a small pan and heat, stirring occasionally, until the butter melts and the solids toast. Once the solids are a golden brown and the butter is fragrant, remove from the heat.

Whisk together the sugar, flour, salt and ground coconut in a bowl. Make a well in the centre and add the egg whites. Whisk until a smooth batter is formed. Add the warm browned butter in three additions, whisking in each.

Scrape the batter into the prepared pan and spread evenly. Place in the oven, then turn the temperature down to 350F. Bake until browned and an inserted skewer comes out clean, about 20 minutes. Let cool on a wire rack.

Once cool, slice off the top to level the financier. Cut out 6 rounds using a 5-cm ring. Each round should be about 1cm tall – you may need to trim them a little more. Place the rounds in an airtight container until ready to assemble the moussecake.

Only prepare the mousse once the above components (apart from the jelly) are prepared.

Heat the milk until it comes to a simmer, then stir in the tea. Cover and set aside to steep for one hour. Strain the milk and weigh – top up with some additional milk to bring the weight back to 120g.

Whisk together the milk, sugar, and egg yolk in a glass bowl. Split the piece of vanilla pod, scrape out the seeds and add both the seeds and pod to the milk. Place the bowl over a pot of simmering water. Cook, stirring with a rubber spatula, until the mixture thickens or reaches 160F.

Remove from the heat and let cool until room temperature.

Line six 6-cm rings with a strip of acetate. Wrap the bottom of each ring with plastic wrap, stretched taut, to prevent leaking until the mousse sets.

There should be about 0.5-1cm left in each ring for the rhubarb jelly.

Place the chopped rhubarb in a small saucepan along with about 1/3 cup of water. Bring to a boil, then turn down a simmer. Cook, stirring occasionally, until all the rhubarb is very tender.

Transfer the cooked rhubarb to a jelly bag and allow the liquid to drain out. Once cooled enough to handle, squeeze the bag to extract as much liquid as possible.

Measure the resultant rhubarb juice and top up with a bit of water as needed to bring it to 120g. I left the jelly unsweetened, but do feel free to add a bit of sugar if you prefer; if so, stir it in at this point until dissolved.

Melt the gelatin in the microwave and whisk into the rhubarb juice. Transfer to a cup with a pouring spout and pour a thin layer on top of each set mousse cake. Return to the fridge to allow the jelly layer to set completely.