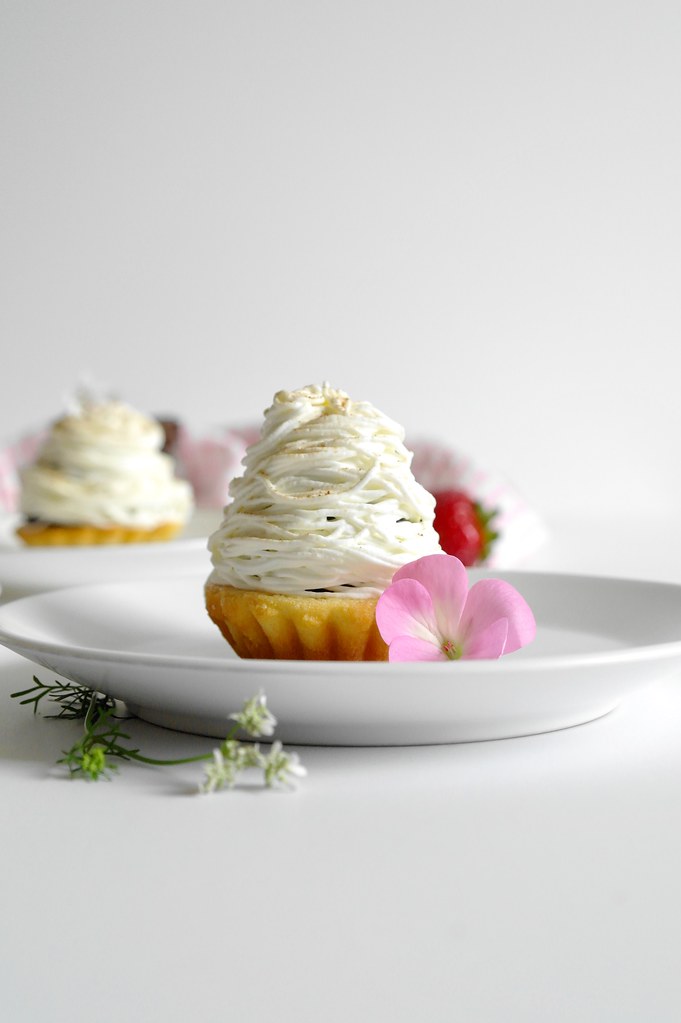 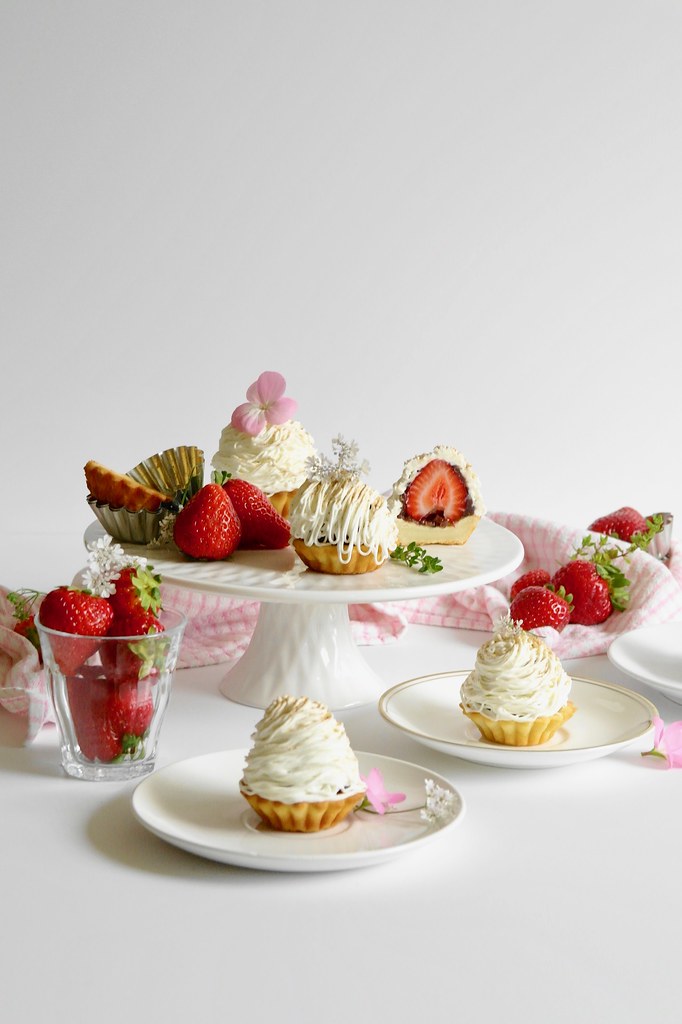 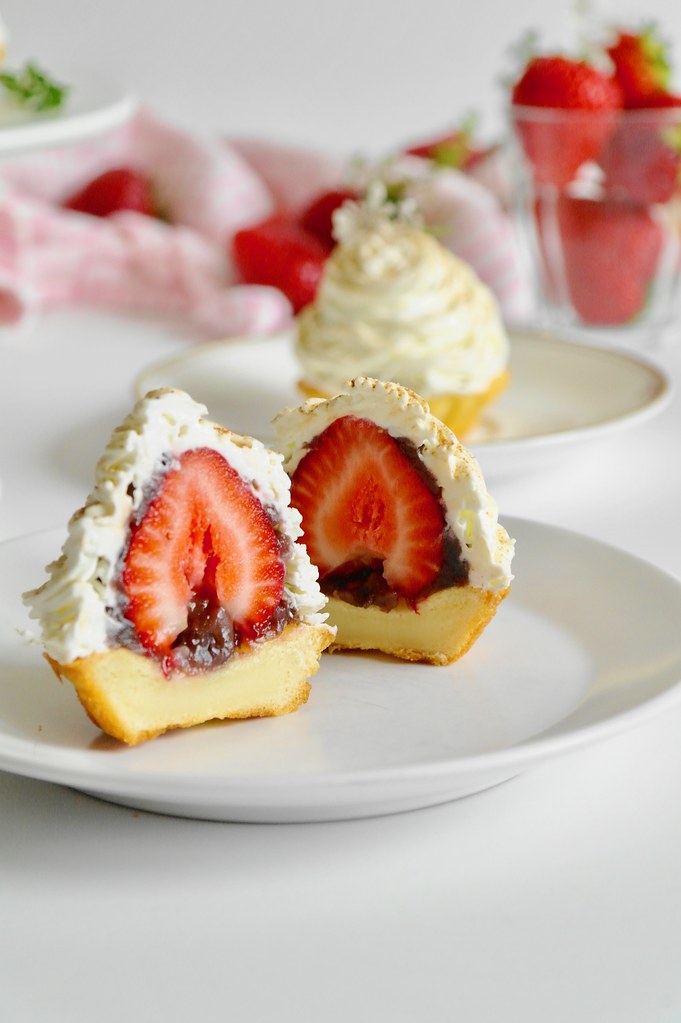 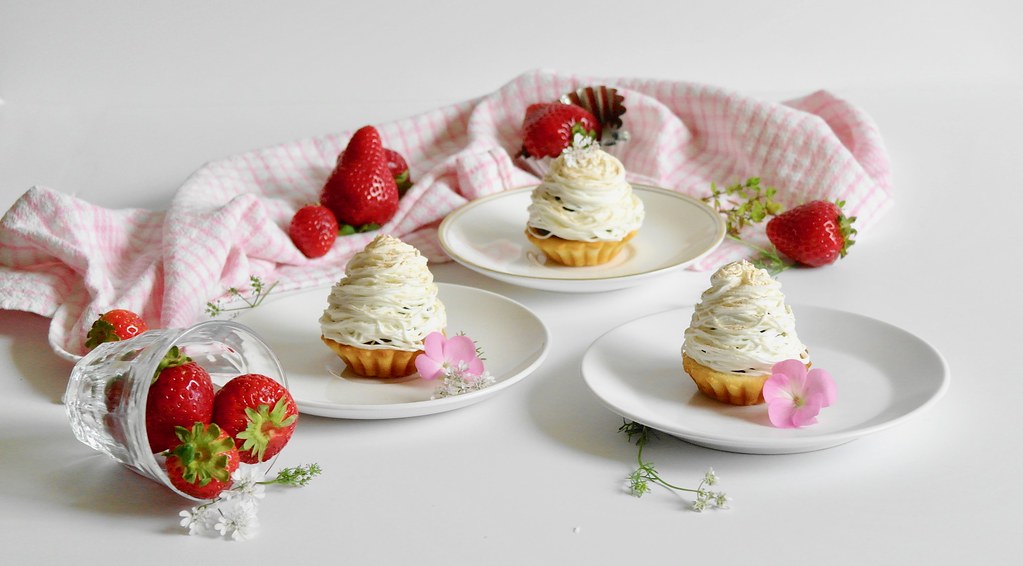 Mont blanc is traditionally a chestnut and cream dessert. The components vary, but it is always easily recognized by its pathognomonic piped spaghetti-like strands of chestnut cream – there is a piping tip specific for it (which I recommend acquiring if you plan to make mont blanc a regular thing as trying to do this with a single or tri-hole tip is… terrible.)

Mont blanc was enthusiastically adopted in Japan in 1945, where it seems to have gained more traction than in its French home. And as is the great thing with adopted foods, they come into their own in their own ways. While I love the chestnut and cream profile of the original, I can take a cue from the strawberry, sakura, sweet potato, and matcha versions that abound to try something different as well.

In this case, I based mine around strawberry daifuku, a whole strawberry typically encased in anko (sweetened red bean paste) and wrapped in mochi, a combination first premiered by Wahei Osumi in 1985. 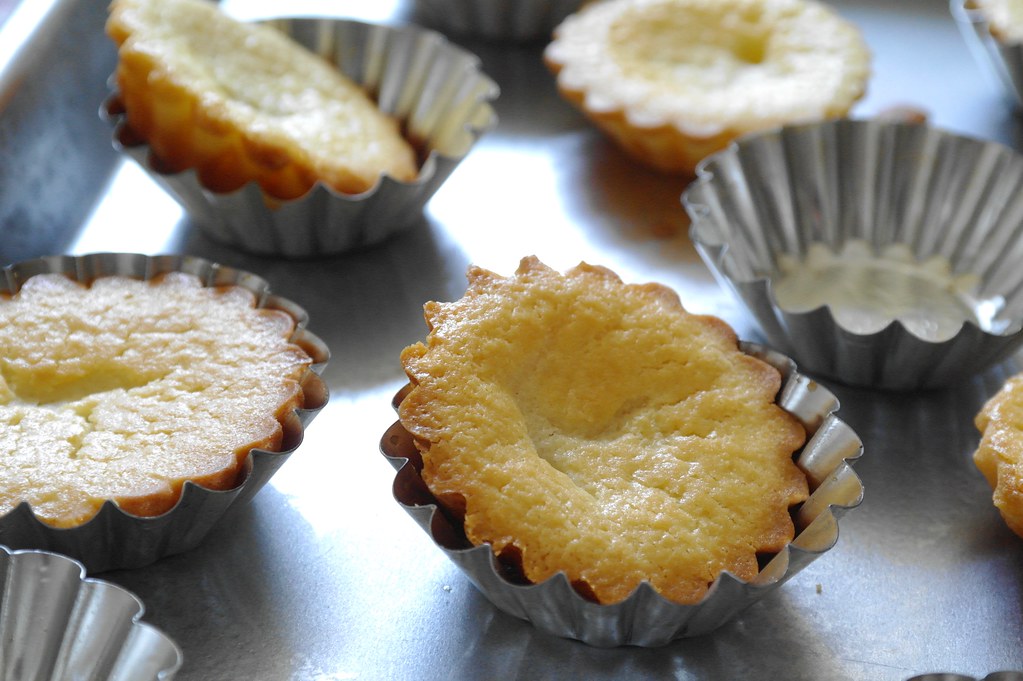 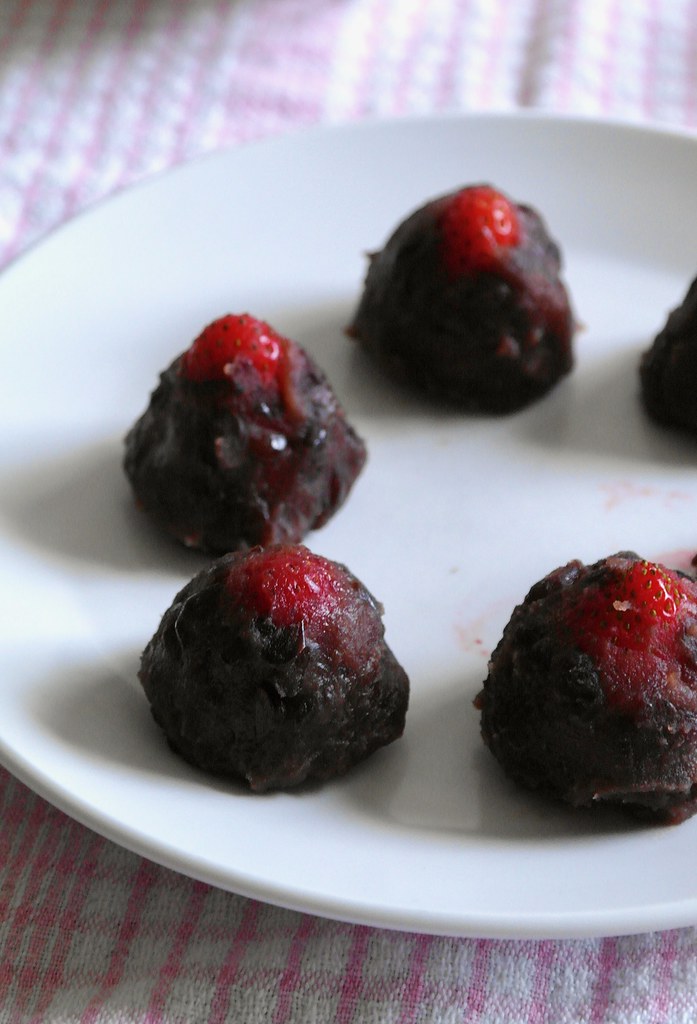 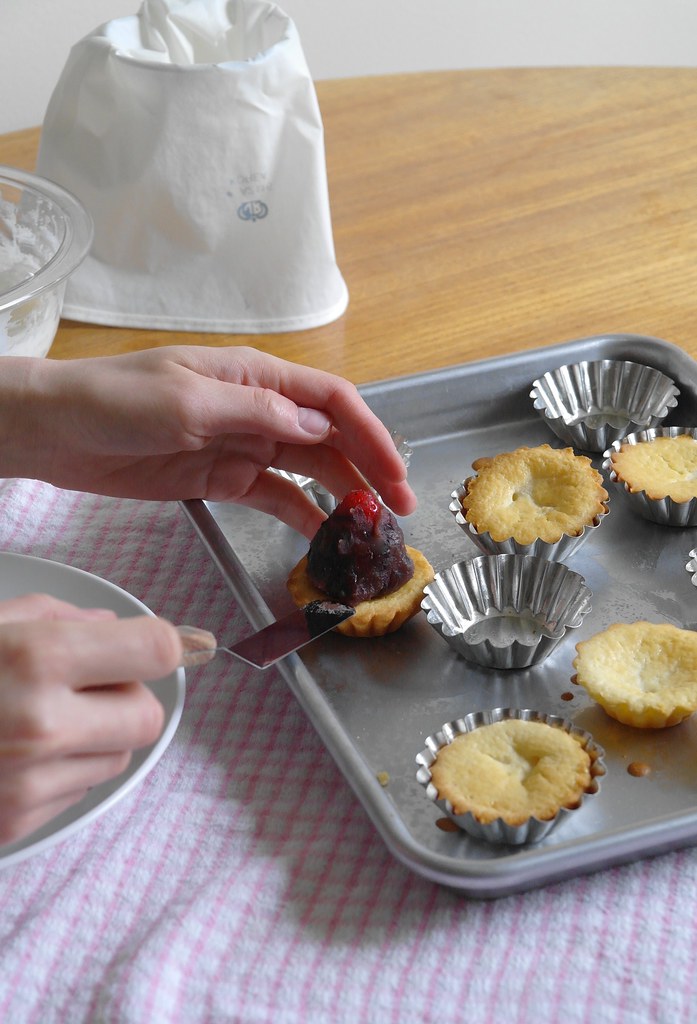 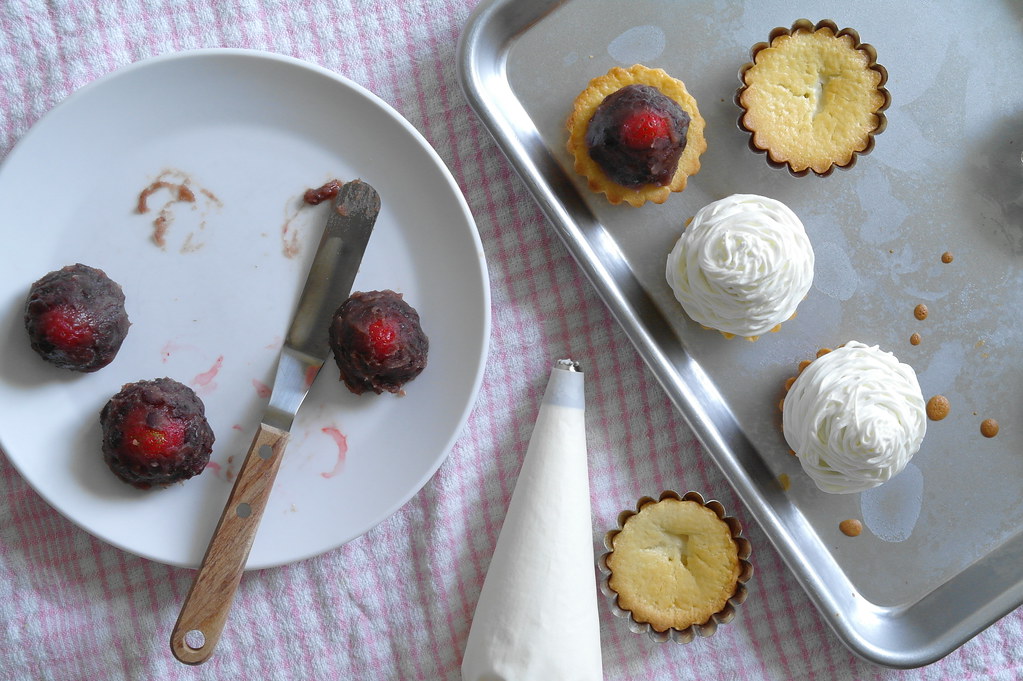 The cake sits on a base of butter mochi, being mochi rendered in a crisp, brown-edged and buttery cake form. On top of this I put the classic strawberry daifuku filling of strawberry in anko, and covered it with piped strands of yoghurt cream and a dusting of dried sakura petal powder.

The butter mochi provided chew, plus caramel and butter which are a bit more untraditional, but that I adored. I was most taken with how the anko brings out the flavour of the strawberry; perhaps it’s a matter of the added sweetness or the gentle flavour, but together the (rather okay-ish) strawberries tasted like they were (okay, let’s not be too effusive, but I genuinely mean this!) at their peak.

As I was making the cakes, I was a bit concerned about how heavy the combination of sweet/dense/rich red bean with sweet/dense/rich butter mochi would be. But in the end, I didn’t find it that way at all – the heavier components were balanced by the strawberry and yoghurt cream. It’s my favourite sort of dessert: some butter, some cream, some fruit! 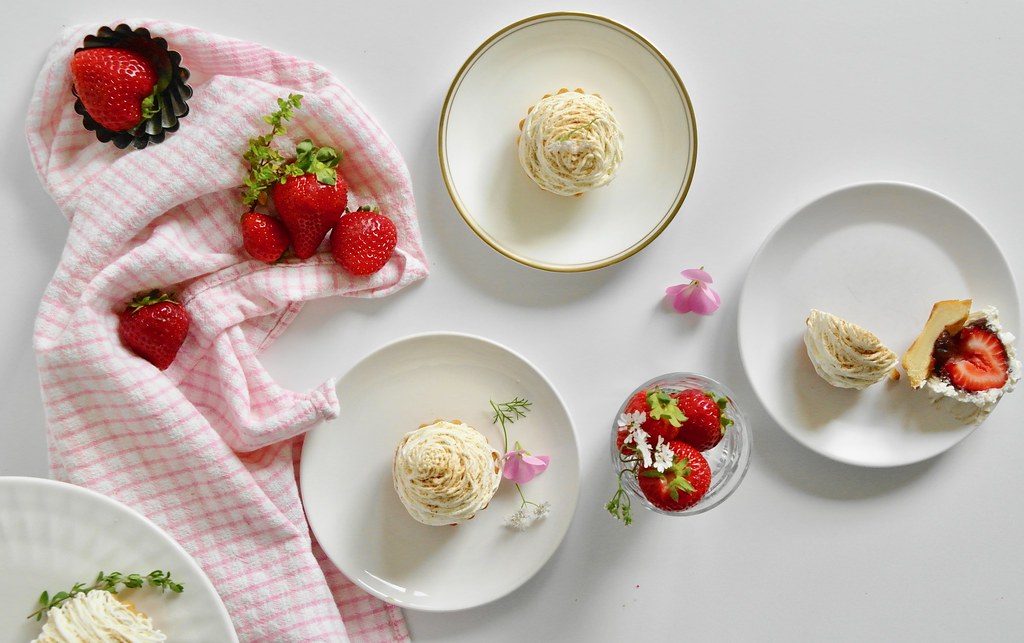 I am still trying to improve my mont blanc piping! It takes a bit of coordination, so in other words, it definitely does not come naturally to me. The strategy is to match the speed at which you’re extruding the cream to the speed at which you move the piping bag around the cake. If the strands of cream aren’t settling neatly, look at how they’re falling and adjust accordingly. If you pipe faster than you move the bag, the cream curls up on itself in tangles. On the other hand, if you move faster than you pipe, the strands of cream break.

The final challenge is in the eating – it’s best to a get a bit of each component in each bite. A good start is cutting the cakes in half: chill before eating, hold by the base, and gently saw through the strawberry with a small serrated knife to cut them in half. Or just go at it with a fork!

While the cakes are best eaten soon, a day later, the strawberry, within its den of red bean paste, macerates, becoming syrupy sweet. 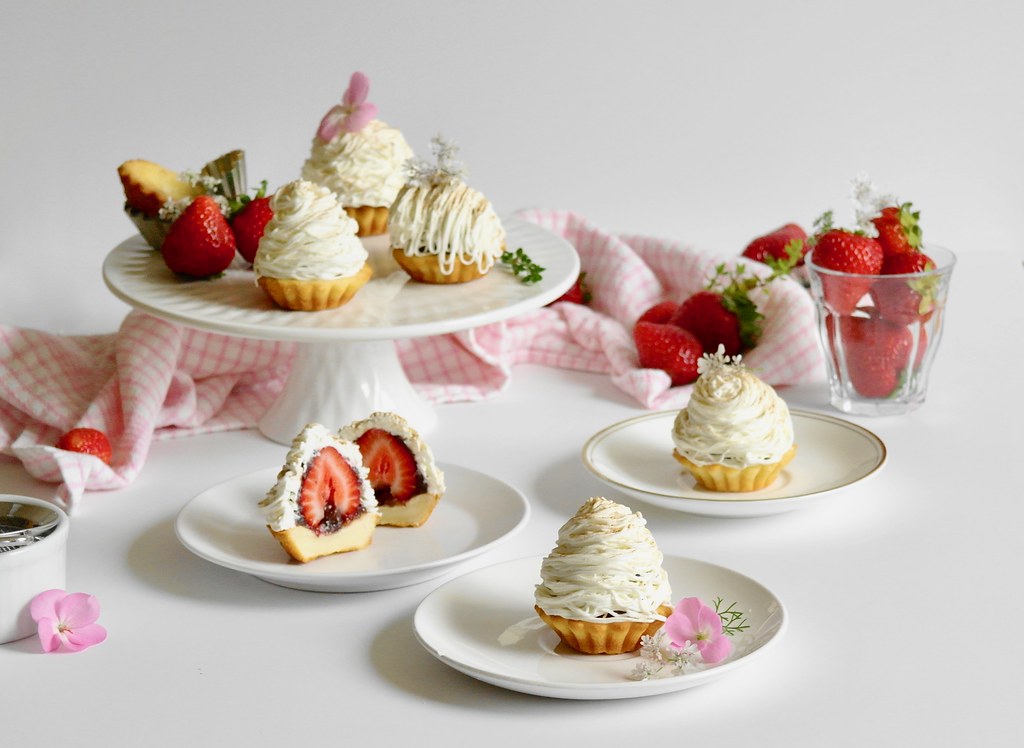 Preheat the oven to 350F. Brush melted over thoroughly over all the nooks and crannies of 8 small fluted tins (like the sort used for sandkaker).

Whisk together the mochi flour, salt, and sugar. Separately, whisk together cream, milk, egg, vanilla extract and melted butter. Pour the wet ingredients into the dry and whisk together. Ladle into the buttered tins, filling each about 0.5-1cm from the top.

Bake for 25-30 minutes or until nicely browned an inserted skewer is removed with only moist crumbs clinging, not a slick of batter. Let cool until you can handle them, then wiggle them out of their tins and let cool completely.

Whip the cream until almost stiff, then add the greek yoghurt and 1/2 tsp sugar and finish whipping until stiff – I only added 1/2 tsp sugar to smooth out acidity, but feel free to sweeten more if desired. Transfer the cream to a piping bag fitted with a small mont blanc tip (Wilton #233).

Sprinkle with a light dusting of the sakura petal powder.