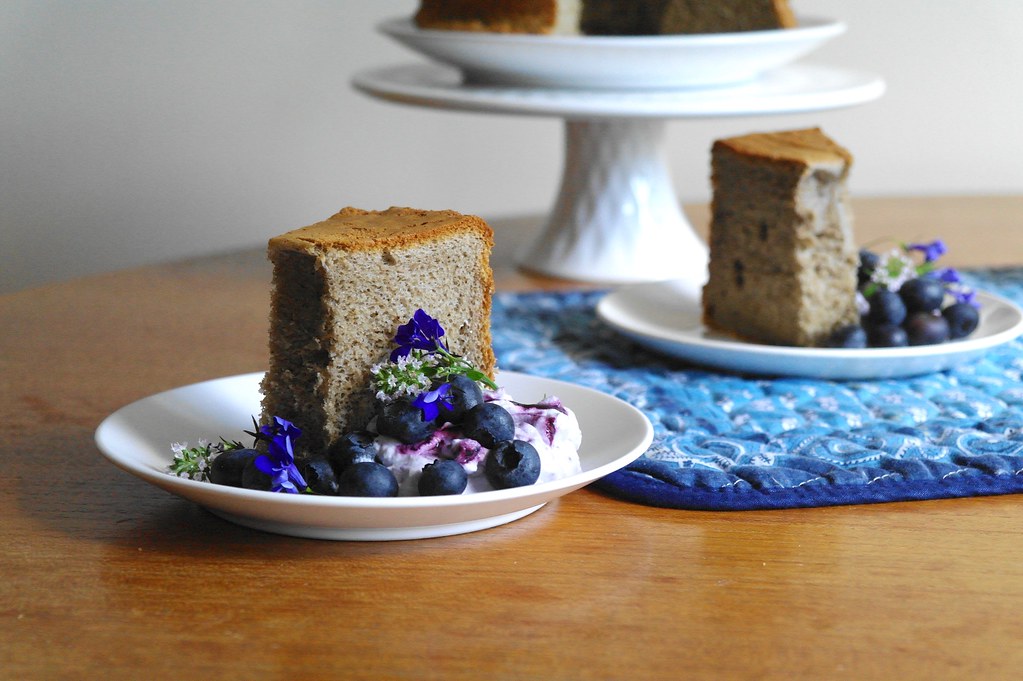 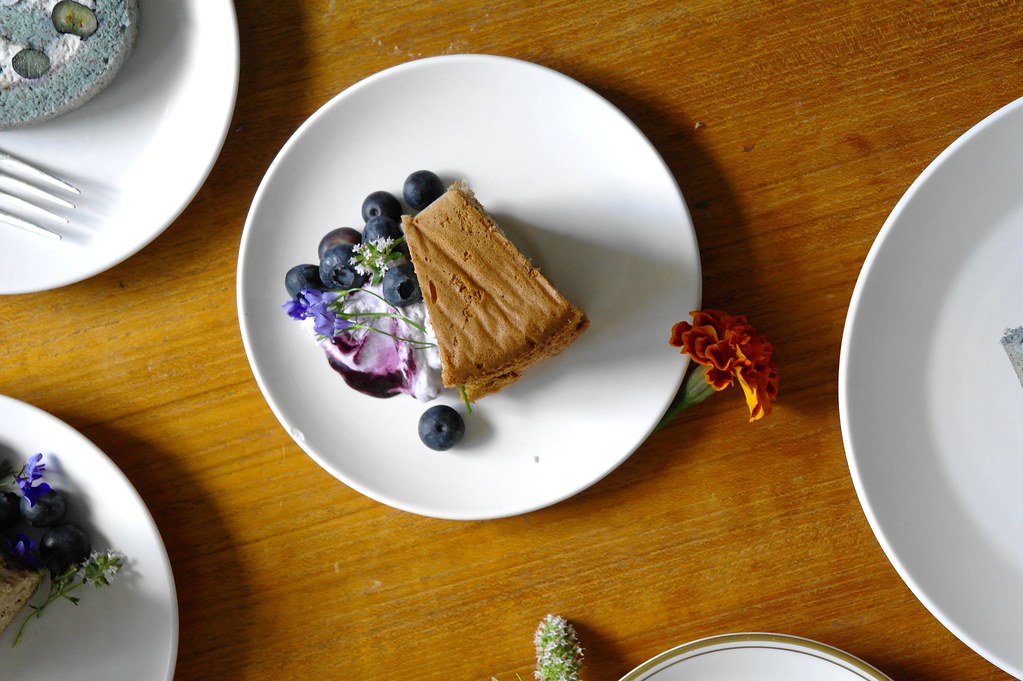 The inspiration for this cake was derived considerably from my desire to make a purple cake – like when frozen blueberries bleed into your muffin batter, except more intentional and not a greeny blue, but more a intense and beautiful purple in colour. This was despite not having seen any purple cakes (apart from ube-flavoured ones) which should have let me know that making a purple cake from blueberries is not a straightforwards endeavour.

Below are two interpretations of an earl grey and blueberry cake that didn’t quite meet the desired purple mandate, but do taste nice.

The first attempt began with an earl grey and blueberry chiffon cake. I used blueberry juice in which earl grey tea was steeped for flavour and colour.

Delightfully, in it’s initial phases — a mixture of steeped blueberry juice, eggs, oil — was an intense purple. Everything went down hill following the addition of the flour mixture, as the batter quickly morphed to a grey-tinged green.

For me, this has been one of the few times that I’ve needed to consciously consider chemistry in such a in-your-face manner – i.e. very visual colour changes! Whereas usually, while interesting to read about food chemistry, I typically do very little with that information.

Blueberry pigmentation is derived from anthocyanins, which also are responsible for the colours in many flowers (thank you singular plant biology course I took!). Notably, anthocyanin colour is affected by pH, shifting from more red at lower pH (acidic conditions) to violet to blue at higher pH (basic conditions). I would guess that the base in the baking powder shifted the pH such that the colour lost its reddish and violet hue. Perhaps the green colour emerged from the combination of yellow egg yolk with the blue-er pigment.

The strange green cake baked up into a rather pleasant grey-brown instead – and the tea-speckled grey crumb did conjure connotations of earl grey. The aforementioned/linked paper also describes how anthocyanin is less stable at a higher pH, however given the rapidity of the changes I suspect what I observed was more to do acid/base reaction than degradation – but perhaps pigment degradation could have played some part in the colour changes during baking.

Regardless of the colour, the chiffon cake had a pleasantly light taste of tea to it, and was quite nice served with cream swirled with blueberry puree and more blueberries.

For the second go around, I thought I would start with a base cake recipe without baking powder in hopes of better preserving the colour – so I turned to my favourite egg-leavened sponge. I also used a bit of cream of tartar to help stabilize the whipped egg whites, which has the added benefit of being a bit acidic. As the skin of blueberries appears to contain the greatest concentration of the desired pigments, I made a blueberry puree as opposed to using juice.

The resulting blue batter baked up into a blue cake – a sort of strange blue to be precise. It looks a bit artificial to me as the colour doesn’t remind me of anything edible, though it would be a strange choice for an artificial colour as it’s not particularly pretty. To be honest, it mostly just reminds me of the disintegrating foam pad found under our old carpet.

To finish the cake, I filled it with earl grey infused whipped cream which was clearly tea-flavoured and delicious. However, I did find the cream didn’t whip up very smoothly – perhaps to do from acidity from components such as tannins in the tea? More acid-base indeed!