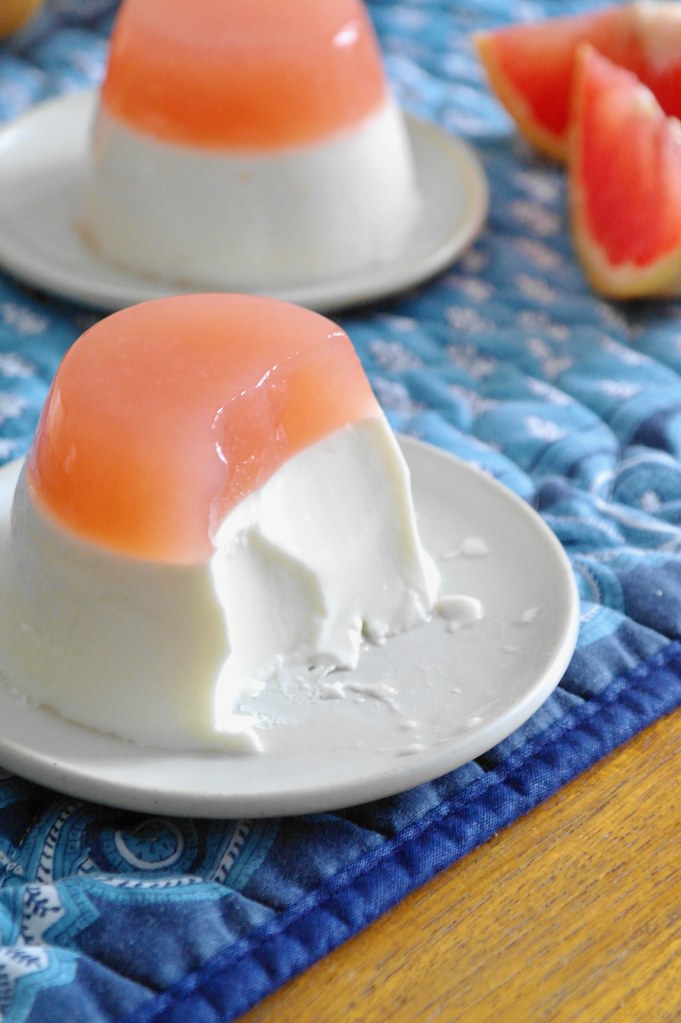 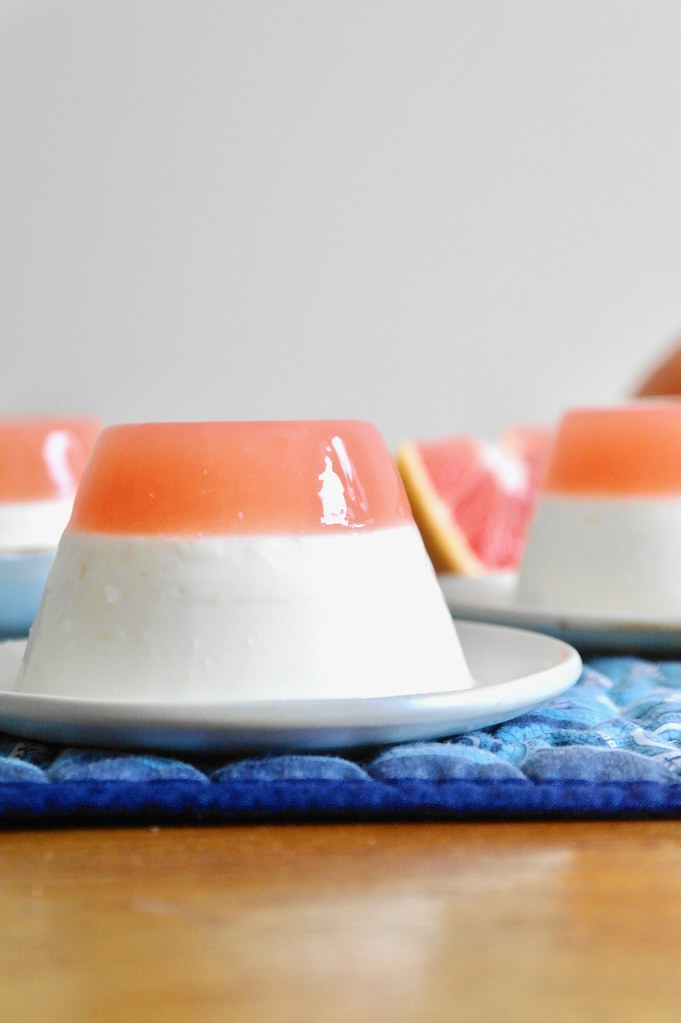 This is day 3 of a series celebrating local Toronto businesses!  Recent events have put many local businesses in a difficult position and unfortunately, it’s not clear when this situation will come to an end. For ten days I’ll be posting recipes inspired by some of my favourite local businesses as my own way of celebrating what they bring to our communities. While we may not be able to visit our local bakeries, cafes and restaurants right now, this is a way of keeping them in mind, and a reminder to support them again once there is a chance.

I’ll be honest: L’arc en Ciel is pretty much the model of my (utterly) fantasy bakery business I mull over in the back of my mind some days – there’s a day-to-day base of gelato (though in my imagined bakery it’s ice cream), with some supplementary, seasonal and creative baked goods. They are a relatively new Toronto bakery, having opened over the summer. They did temporarily closed before we could try much, but the selection of tarts, gelato cakes, and pastries in the display case are absolutely up my alley in what I would like to try (and try to bake).

Back in late summer I had tried some of their gelato with a friend. This is based on the wonderful combination of gelato and sorbet flavours I had (which was also featured in one of the bakery’s gelato cakes) – a creamy savoury-sweet honey rosemary gelato and a biting acerbic grapefruit sorbet. I’ve replicated the flavours and creamy/bitter contrast here, in a panna cotta infused with rosemary and honey, and a tart grapefruit jelly. 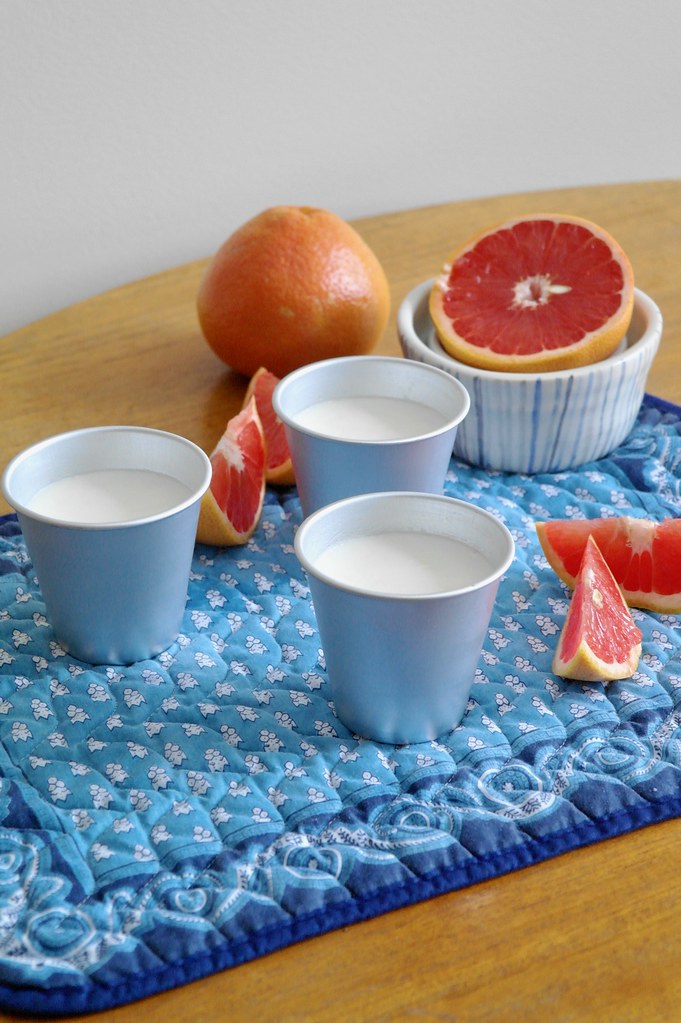 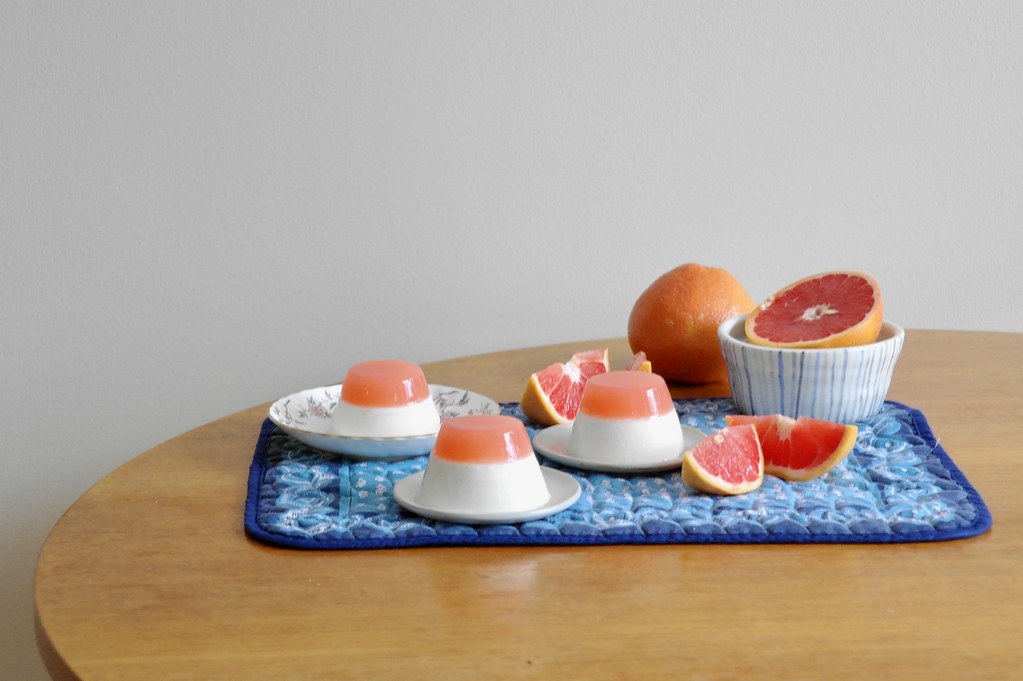 The photographs show a batch that I made with a bit of firmer set panna cotta than usual in order for it to hold some more of its height. But I’ve also made these is shorter, wider ramekins with a typical set, where the panna cotta languidly slips out and rests, in a rather more reclined position, across the plate. Either is equally delicious, so I’ve included gelatin quantities for both the classic and firmer consistency.

However, in both cases, I recommend keeping the jelly as is – a bit firmer! In one batch I tried making the jelly at the same gelatin proportions as the panna cotta, but it seemed to struggle to hold together, and I prefer a firmer jelly anyhow.

When it comes to unmolding the panna cottas (as up until now – I’ve always made them in cups or jars!) I discovered a couple things: First of all, it’s not quite as scary as it can seem (at least I was scared that it wouldn’t come out at all!) But that dip in hot water is essential – the sides will release easily after you run a knife around the edge. However, the bottom of the panna cotta will stick unless warmed and slightly melted.

Of course, I also discovered that you don’t want to dip them for too long! 10 seconds was enough to release it when I used ramekins, and just 5 seconds with metal pudding tins. Closer to 30 seconds, I found the bottom and sides started to melt. To reduce chance of melting, I realized that I only need to dip the bottom couple centimetres of each ramekins/tin as the sides are loosened with a knife.

Edit Oct 2020: I am so sad to say that L’Arc en Ciel has closed. At the beginning of the pandemic the reality of its duration hadn’t yet set in for me – but regardless, over the past several months, the impacts have certainly been felt. So many condolences to those who have lost loved ones and those that have been pushed into challenging situations or whom have had their challenges exacerbated. 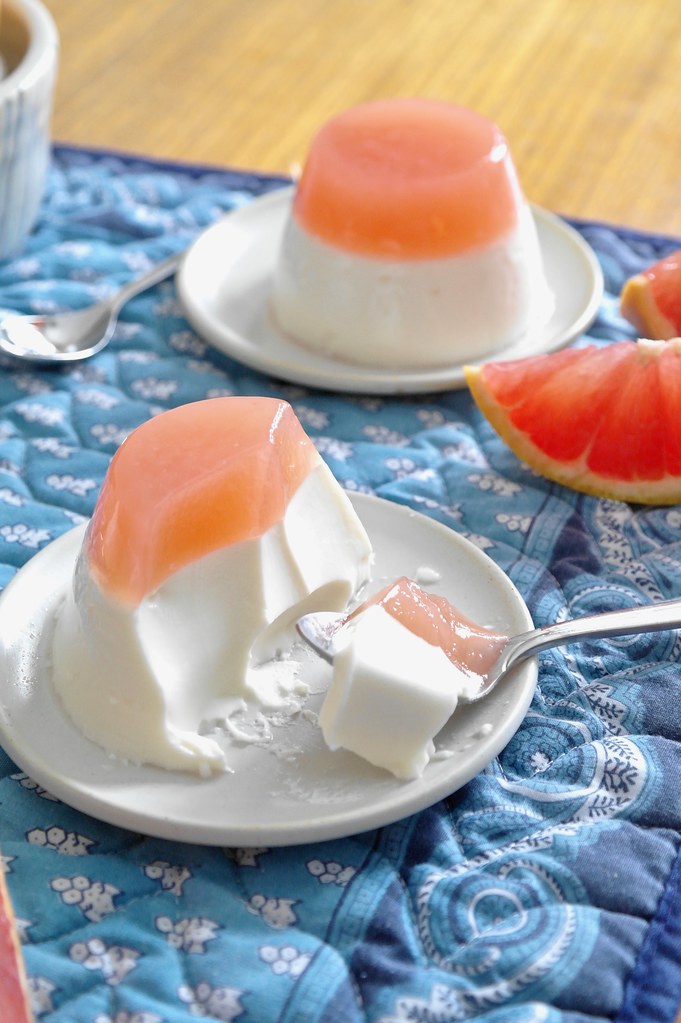 For 3 panna cotta – multiply as desired. Of course if you have Campari around and want to sub some in the grapefruit jelly, that sounds delightful! It’s a bit of a “lighter” panna cotta (ratio of milk to cream being 2:1) as the serving size is quite large, but feel free to use all cream if you prefer! The layered style was inspired by Sugar Salt Magic.

special equipment: 3 pudding molds that can hold 150mL (of course you can use any size of ramekin you like – just be aware that depending on the volume you may make more or less individual servings!)

Light grease three pudding molds that can hold 150mL with a drop of oil, lightly wiping out any excess with a paper towel.

For the grapefruit jelly, juice the grapefruit, and combine with the grapefruit zest in a small saucepan, heating until the juice is warm (but do not cook it) to help extract some of the flavour from the zest. Remove from the heat and set aside for around 10 minutes, then pass through a sieve, pressing to extract the juice. Measure out around 150mL of juice. Taste and sweeten with a bit of sugar or honey if desired – I kept it as is.

Bloom the gelatin with 1 tbsp cold water. Microwave until melted (try 10s bursts – should only take a couple). Whisk in some of the warm, strained grapefruit juice into the gelatin, then transfer back to the remainder of the grapefruit juice, whisking until smooth. Divide amongst the three ramekins, 50mL in each (either eye ball it or transfer into a liquid measuring cup to evenly distribute the juice). Place in the fridge until set, at least an hour or two, before adding the next layer.

For the rosemary honey panna cotta, combine the milk and cream in a small saucepan. Heat until steaming. Roughly chop the rosemary leaves and add to milk mixture, give it a brief stir, then cover and let sit off heat to steep for 30 minutes. Strain the milk, then stir in honey to taste – I used 25g.

Place the 1 1/2 tsp gelatin in a small bowl and bloom with 1 tbsp cold water. Microwave to melt, stir in a bit of the rosemary milk until smooth, then transfer the gelatin mixture to the remainder of the rosemary milk. Distribute amongst the ramekins, by eye or measure out 100g into each. Chill until fully set, best overnight.

To unmold, pour some just boiled water into a dish. Dip the mould in for 5 seconds (when I made these in thicker-walled ramekins, I dipped for 10 seconds) – you only need to immerse the bottom couple centimetres of it – then run a knife around the edge and tip over onto a plate. 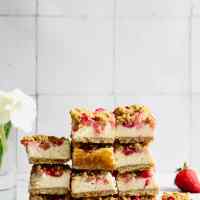 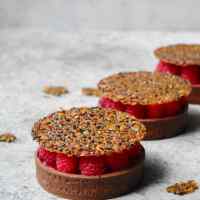