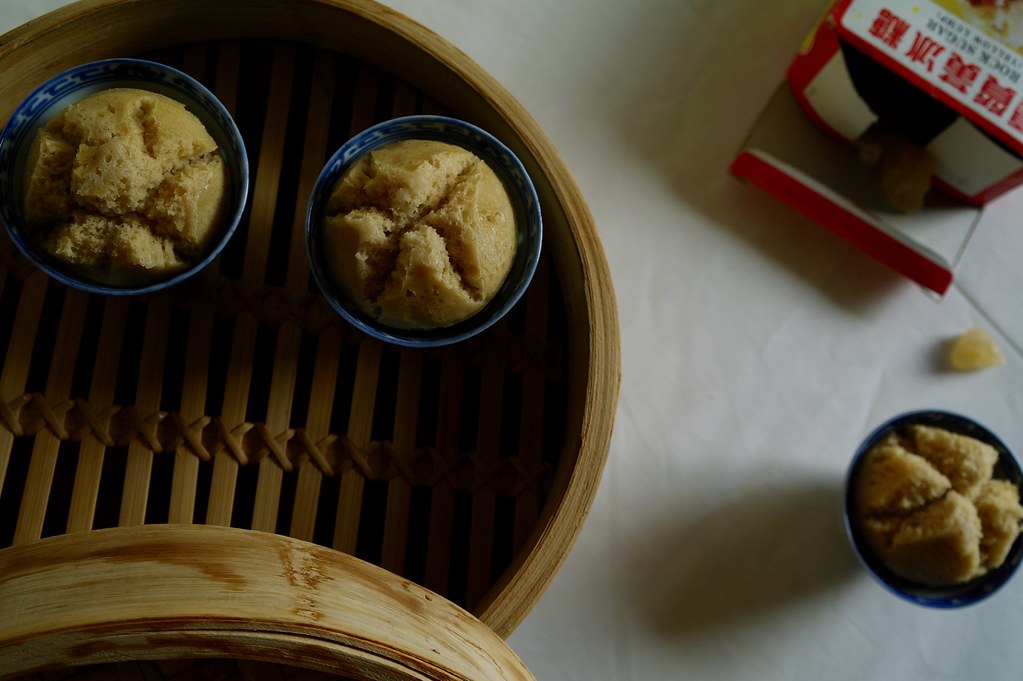 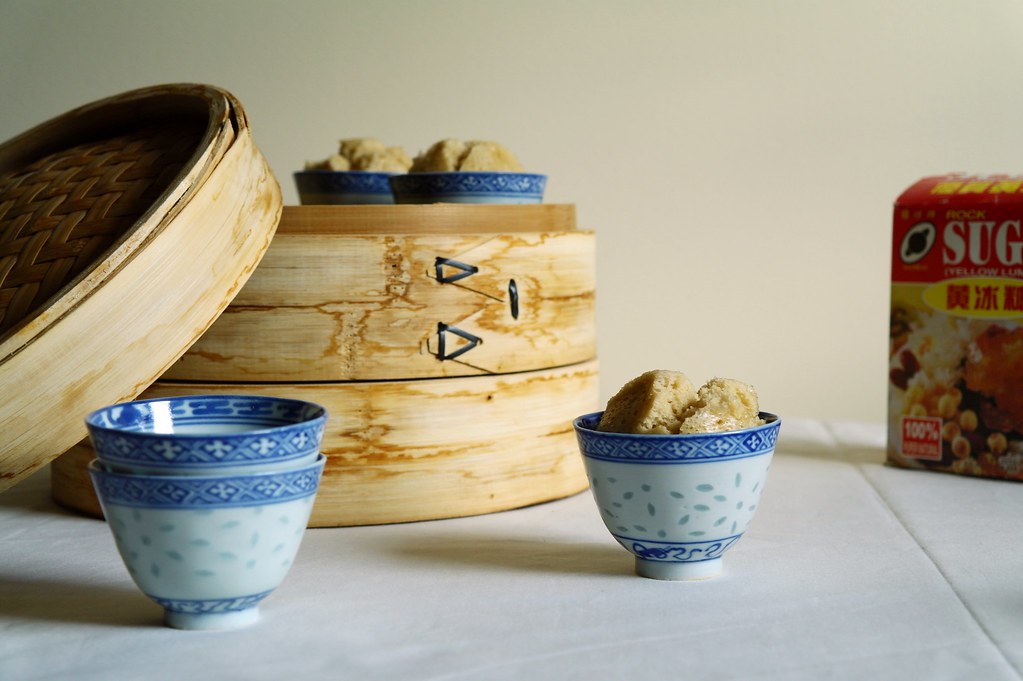 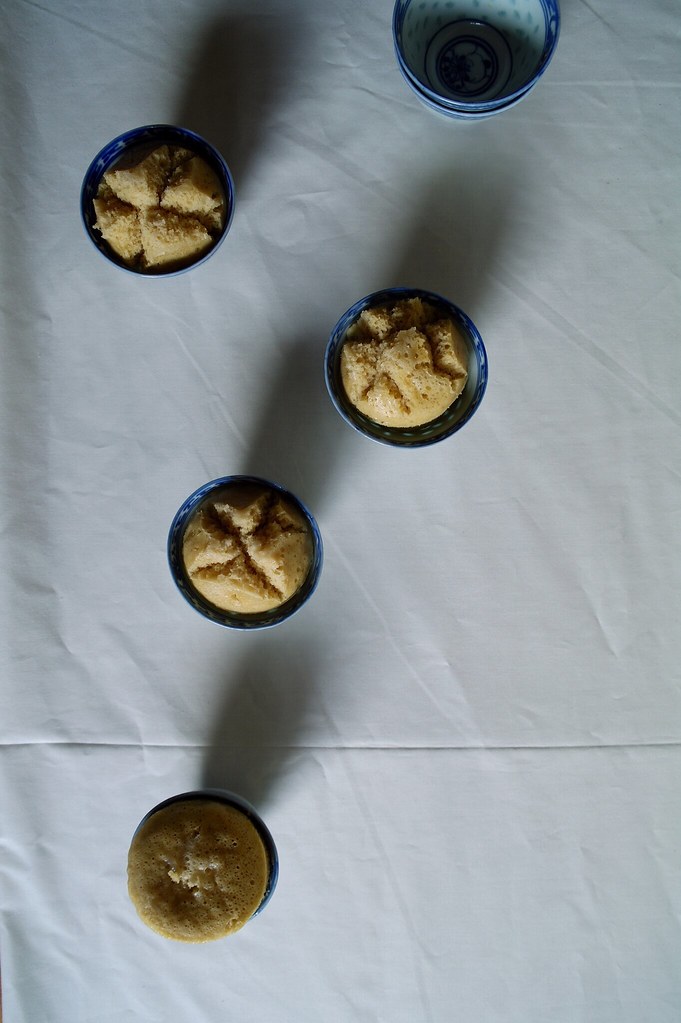 Instead, my first draft was not any of this. It was my usual standard nonsense, about the actual making. I wrote about the trial and error of 7 batches in a dogged attempt to end up with a gift for my grandparents, a cake whose top split into the right number of peaks. I explained the details of each batch—how too much gluten made the cake too strong to split open properly, but the wheat starch helped make the top of the cake smoother. I wrote about how the true secret to these cakes was me turning to the Internet and finding a recipe to work from. 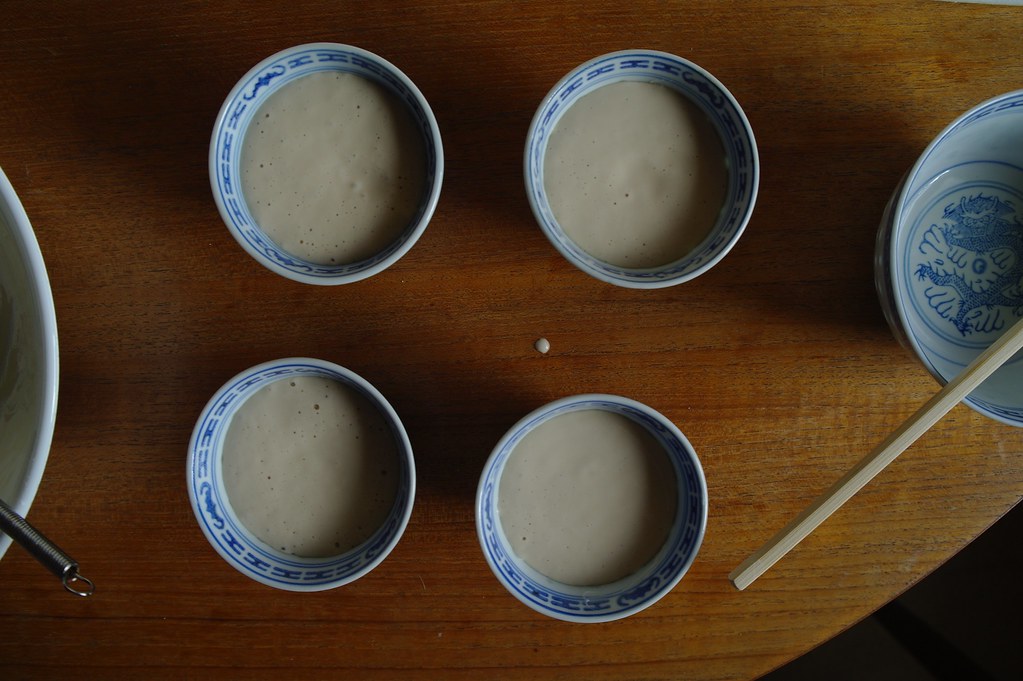 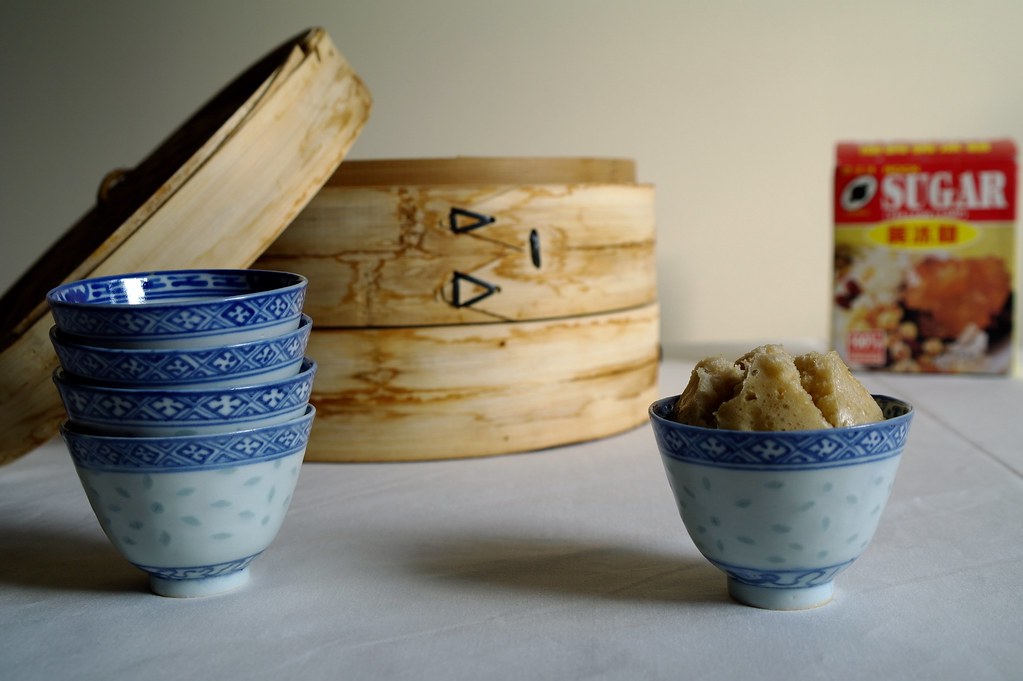 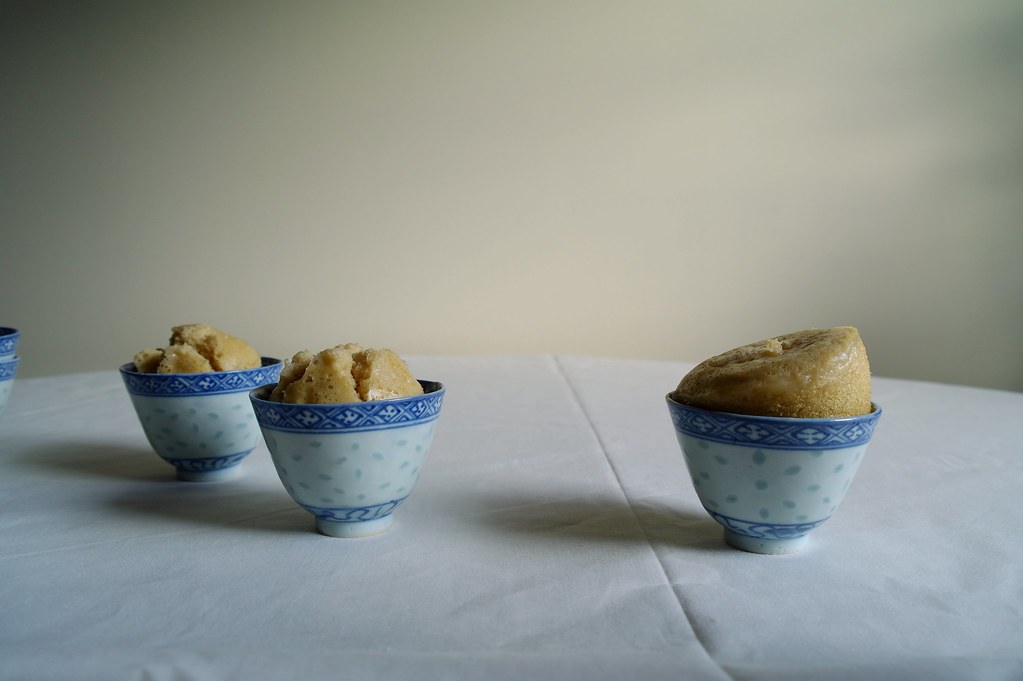 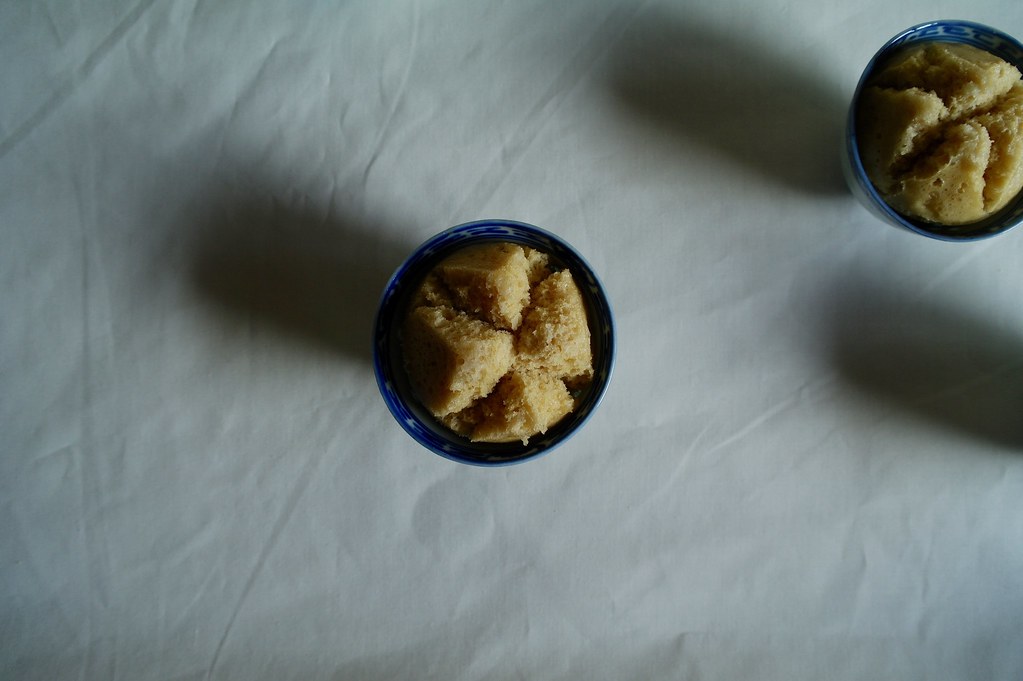 I wrote about how I kept on trying until I ended up with one (and only one) perfect cake.

When I brought that one and a few other failures to my grandparents, my grandpa laughed. He told me that when Ah Ma made them and they didn’t turn out, she would cut the cakes into pieces right away and say “eat!”

Hearing that story made me feel a bit embarrassed. I had become a bit obsessed with trying to replicate the image of the cake that I had in my head, enough to make a quantity of steamed cakes to last me for a couple weeks. I thought that was the way to go about it. And it is. It is one approach, and a relatively effective one, but this time, for this cake, it wasn’t the way I wanted it to be. 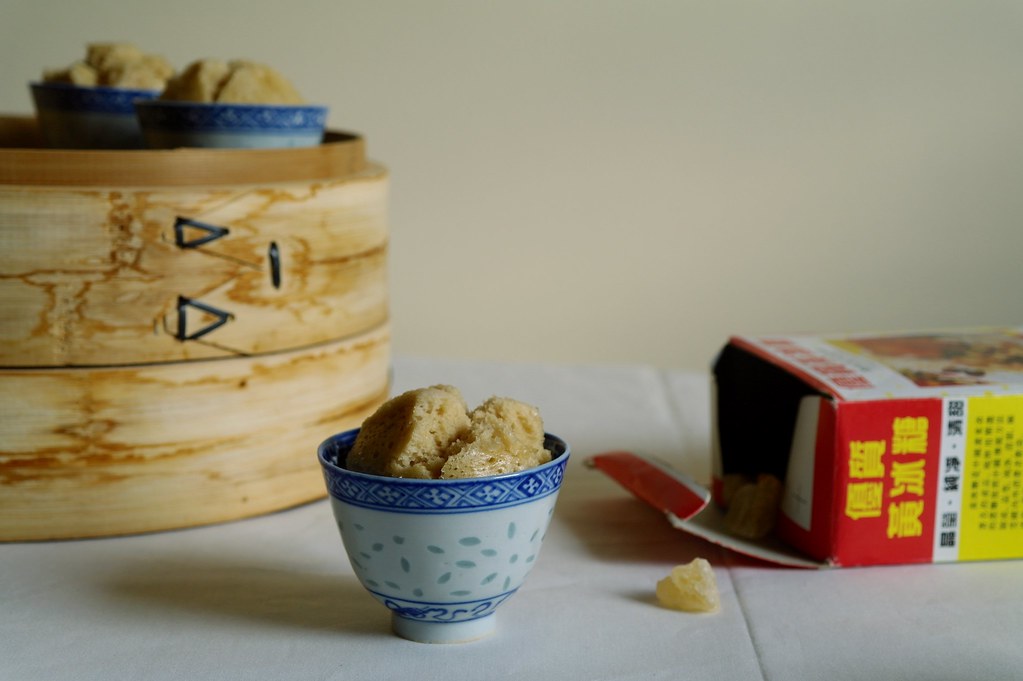 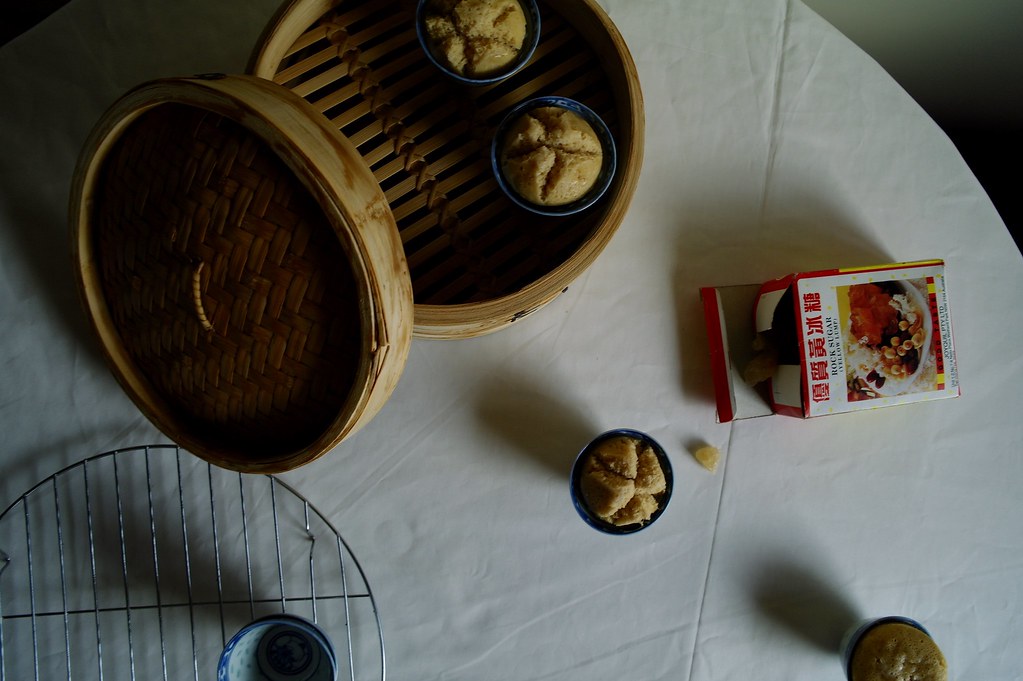 It should have been about a tradition that hasn’t really been maintained and should have been about my family and listening carefully to my grandparents’ stories about the past. I wasn’t honouring my great-grandmother’s resilient care for tradition even when she moved to a foreign land and all in the context of needing to make the money stretch to feed several children. And I wasn’t sharing much luck with my grandparents either – I was just trying to make a pretty cake.

The recipe that follows is completely un-double-tested. I’ll return to it next year, and maybe then I’ll make it perfectly. And hopefully this strange drive for perfection will carry forwards to some other things I make…now that would be useful! 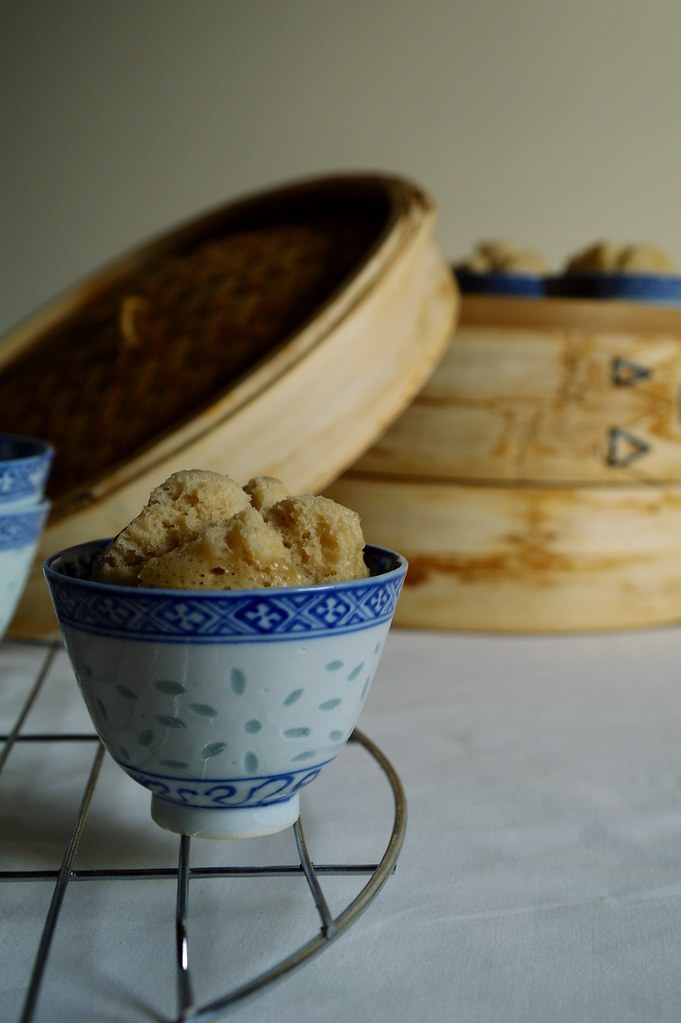 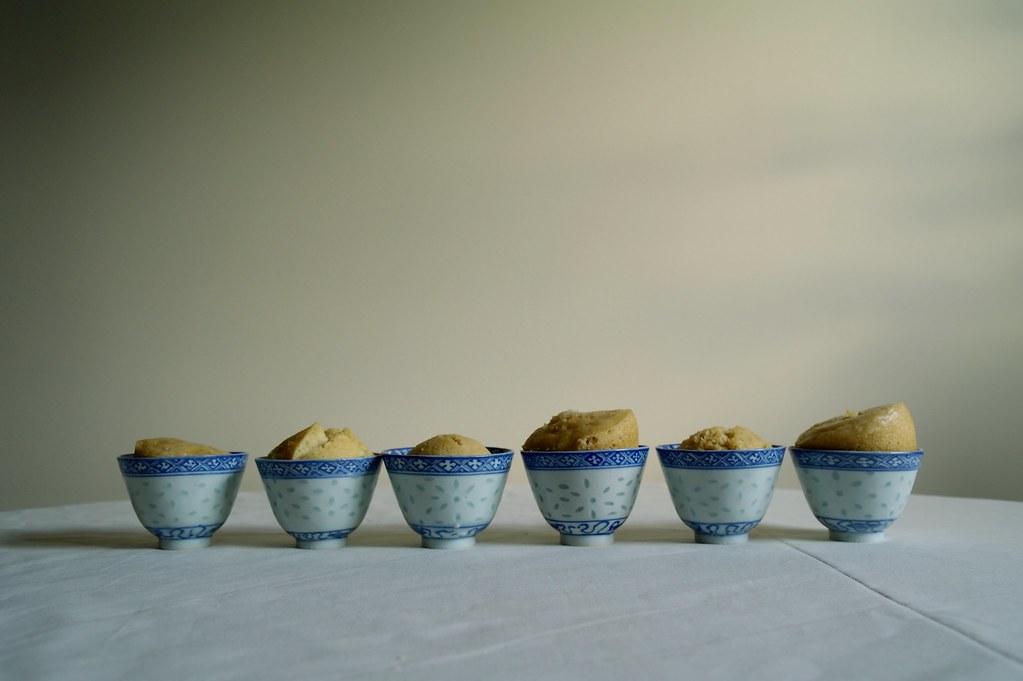 Above is a representative sampling of the cakes that were made. The final batch had a splitting success of 75% (i.e. 3 out of the 4), and just one split into 4 peaks.

So it’s a bit late for the new year, but here they are. These are being brought to Angie’s Fiesta Friday! This week is cohosted by the marvellous Margy of La Petite Casserole and the splendid Su of Su’s Healthy Living.

Adapted from this video. I read about the vinegar tip in the comments–it’s a really great tip (thanks MODgal81!). The cakes are best eaten at room temperature (not chilled) and are definitely nicest fresh. Re-steaming old cakes helps. The photos above are remarkably false in two ways: 1) I used a metal steamer, not the bamboo steamer (the latter wasn’t tall enough) and 2) I used brown sugar, not rock sugar…I happened to find the rock sugar in the cupboard after the fact and thought that it would have been nice to use had I seen it earlier.

Fill a steamer with water, tie a towel as tautly as possible around the cover if metal, to prevent dripping, and set it over high heat.

Whisk together flour, starch, salt and baking powder. Separately, mix together the brown sugar and water. Combine the two mixtures.

Evenly divide the batter between four buttered and sturdy teacups. Using a chopstick dipped in vinegar, trace a cross over each cake to encourage splitting into 4 peaks. Steam for around 15 minutes. Check if the cakes are done by inserting a skewer.

Let cool at least five minutes or so and allow the tops of the cakes to firm up before loosening the edges and removing from the tea cups.