I could also force myself to read just about anything–whether or not I absorbed anything was another matter. But as I grew older, I noticed two things: first, I couldn’t just read anything; I became a lot more selective (and somehow more easily bored; a bit counterintuitive).

Second, the quantity of reading began teetering off as I proceeded through school. My last great reading exploit was To Kill a Mockingbird in grade 10. I read over it 7 and a half straight hours sitting in the same chair, starting at 8 am and ending and 6 (with a half-hour lunch break in between). I was sore afterwards—power reading is hard work. 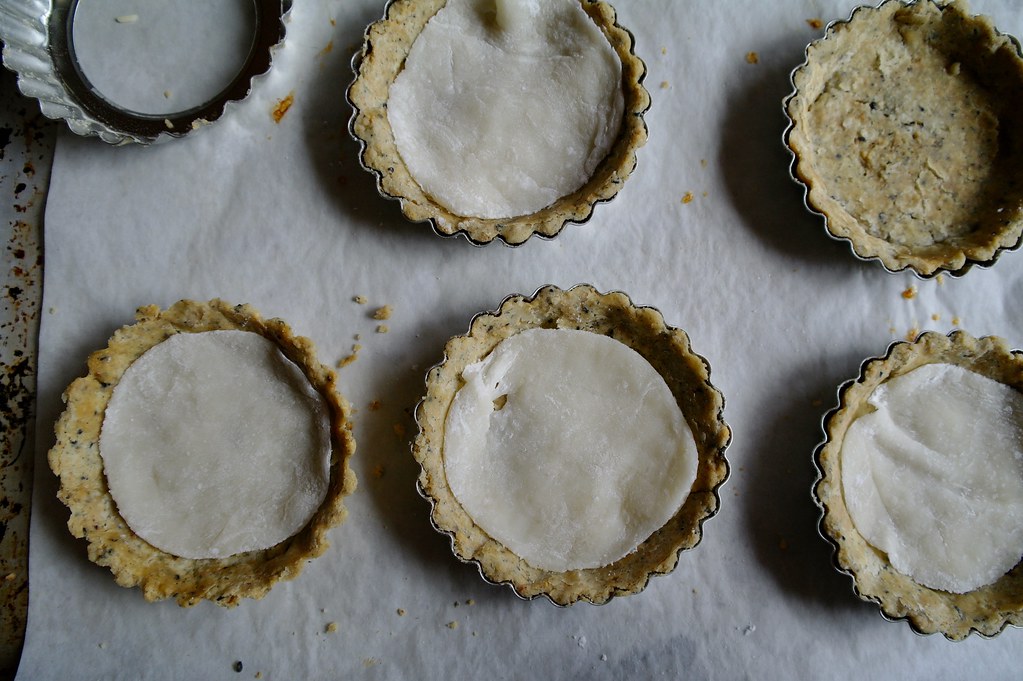 And now, well, I’ve been reading the same novel for a year and a half. It’s The Wind-up Bird Chronicles by Haruki Murakami. I think it’s marvelous and I think I like it, and somehow I’m not forgetting too much of what happened earlier either. But it’s a novel I didn’t have a hope of understanding in the first place, and even less now that I’ve been reading it in such fragmented, discrete chunks.

And while I miss the old appetite I had for reading, I also sort of prefer the more leisurely manner I have now. The novel is sitting in front of my at the moment; I think it may have been a month since I last picked it up. So maybe I should read a bit more soon. 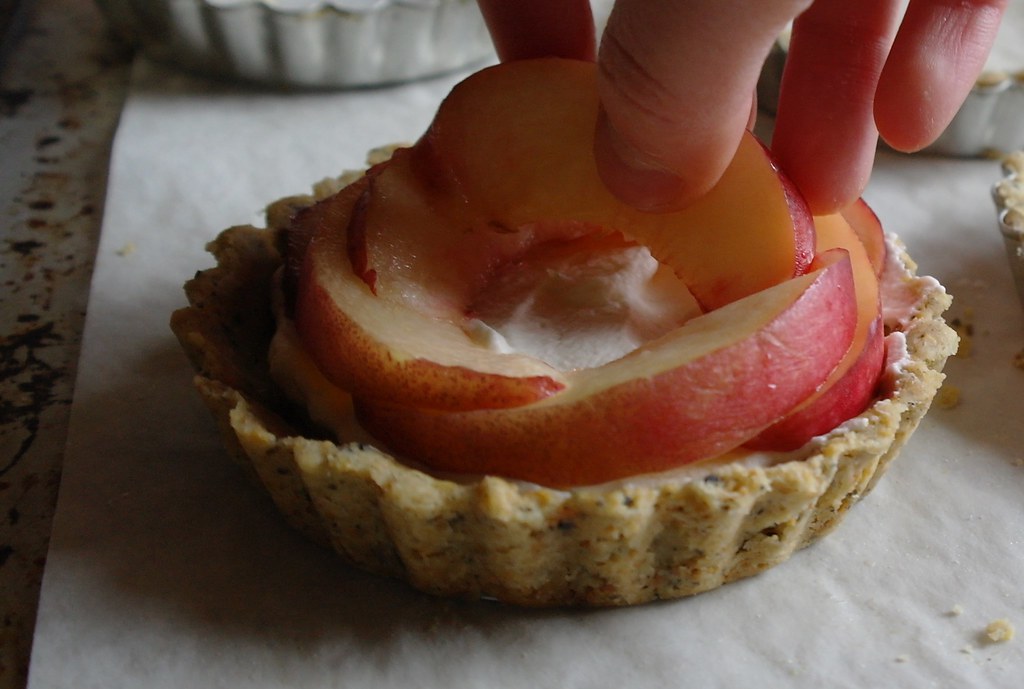 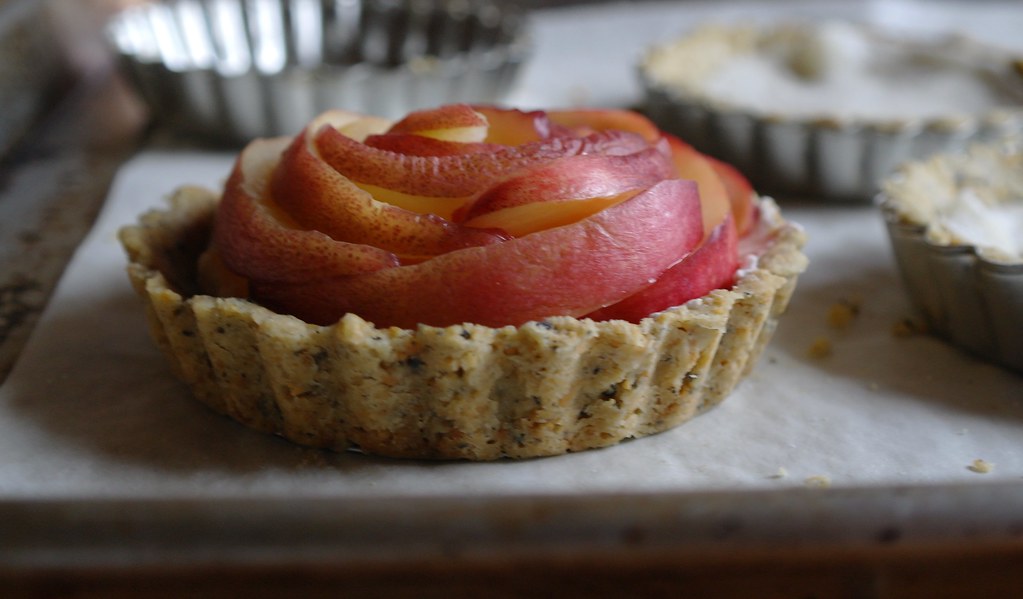 Now, onto the tart: About the only thing I’ve been cognizant enough to recognize in The Wind-up Bird Chronicles is that there are a lot of people shedding old-selves, and giving way to new-selves. It may literally stepping out of their old skin (oh, the horror) or, for the most part, a bit more figuratively. Well, this tart wasn’t made consciously thinking of this, but some connection would be good.

You see, the other day I had an ice cream bar with red beans and mochi in it. It was a good reminder of how much I like cream daifuku…and somehow it turned itself into a tart.

(That was a poor transition. Ignore that.)

But this tart is a bit about re-imagination and reinvention, without being too imaginative or inventive (in other word, general enough to apply to anything): so yes, an almond and ground black sesame shortbread crust with a bit of soft mochi, whipped cream, and white nectarine.

I love the mochi and cream together (which is how I ate the mochi scraps; torn up with a bit of whipped cream on top). I thought that worked extremely well—it was my favourite part of the tart. I made the mochi a bit looser and as a result it wasn’t too stiff or springy against the cream; it was just a bit stretchy, and gave the tart a bit of chew.

It also wasn’t too dry a tart, which is what I expected (starch on starch after all.) Yet the mochi didn’t feel dry at all so eating it on top of the pastry was actually perfectly fine, though it was best if you had some cream or nectarine together with it.

The problem though was how delicate the pastry was. The mochi was also fairly delicate; it could be cut with the side of a fork, however any pressure managed to shatter the crust. This was a lacking point: a bit too much textural contrast between the fragility of the crust and then the mochi and nectarine, which made it more difficult to eat.

Oh, and happy Fiesta Friday! Hosted by Angie, the Novice Gardener, Effie of Food Daydreaming and Jhuls, The Not So Creative Cook. It’s been another tiring week (I think I say this every time) so enjoy a tart! In the meantime, I have a weekend exam, so I’ll be off studying. Maybe with a slice of cake, though. 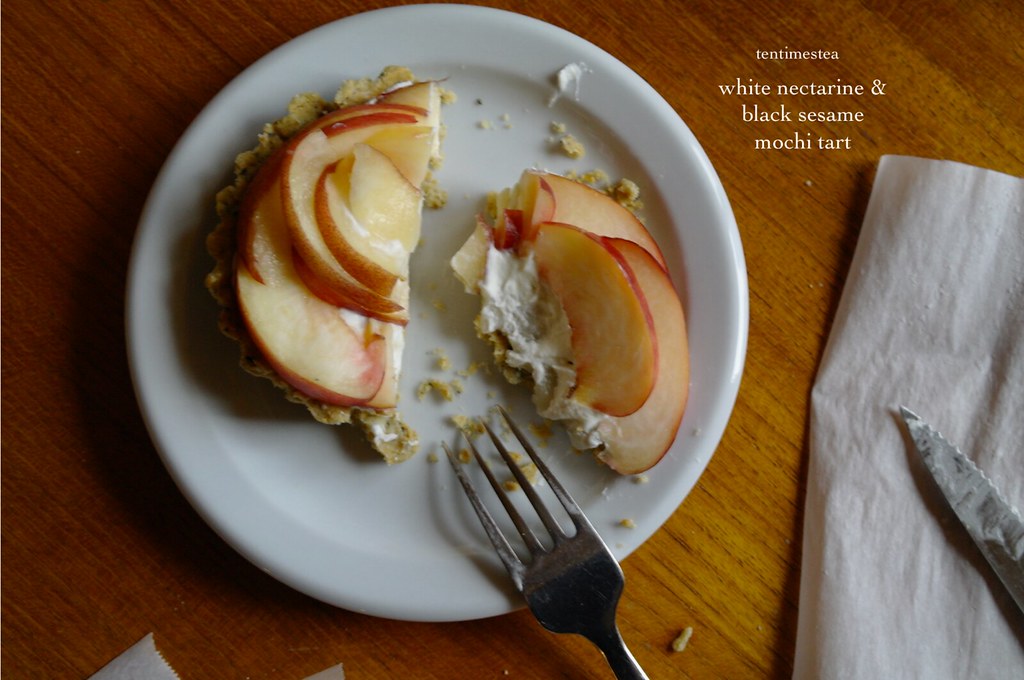 Enough for 5 4-cm diameter tart shells. They are very delicate, so in retrospect I would decrease the almond and perhaps increase the amount of flour. Or look at a recipe next time; I always have mixed results when I freehand things. I tried to ameliorate some of the damage by brushing cracks of the tartshells with a bit of egg white and baking it again…I don’t know how much it helped, but it did help the shells brown nicely. This also makes fabulous shortbread.

In a pan over medium heat, dry toast the black sesame seeds. It’s difficult to assess whether you’re burning them as they’re black. I go until I can hear them sizzling slightly (you’ll have to listen quite closely).

Transfer to a mortar and pestle and crush. From the fragrance released you’ll be able to tell whether you toasted the seeds enough or burnt them. Let cool.

Beat the butter with the salt, sugar, ground almonds and black sesame seeds. Mix in the flour.

Compact into a ball, cover with plastic wrap and chill completely.

Roll out ¼ of an inch thick. Line the tart shells evenly, perhaps with some patching, and chill completely.

Cut five pieces of square parchment paper and place them over the tart shells. Fill with rice or other baking weight.

Bake for 20 minutes with the baking weight, or until the edges are lightly brown and the surface of the tart is cooked.

Remove the papers and rice, return to the oven for another 10-15 minutes or until lightly browned.

Brush the tart shells lightly with egg white and return to the oven for another 10 minutes.

Allow them to cool completely in the pan before unmoulding very carefully.

Adapted from Just One Cookbook; you’ll have quite a bit of leftover mochi scraps for 5 tarts. I made it a few times to play around with the hydration and texture (I’m not sure; perhaps Mochiko is different from the glutinous rice flour I use?); this is what worked for me, but it is a bit different, so do have look at the original as well!

Combine flour, water and sugar in a bowl.

Dust a work surface with potato starch. Scrape out mochi, dust generously with more potato starch. Roll out to around 1/4” thick. The mochi shrinks once you cut it, so use a glass around 4 cm in diameter to cut out circles of mochi.

Brush as much starch off each side as you can.

If not making immediately, place circles between layers of parchment paper in a container or plastic bag, and refrigerate.

Lay a mochi circle in the bottom of the tart.

Spread or pipe some whipped cream over top of the mochi.