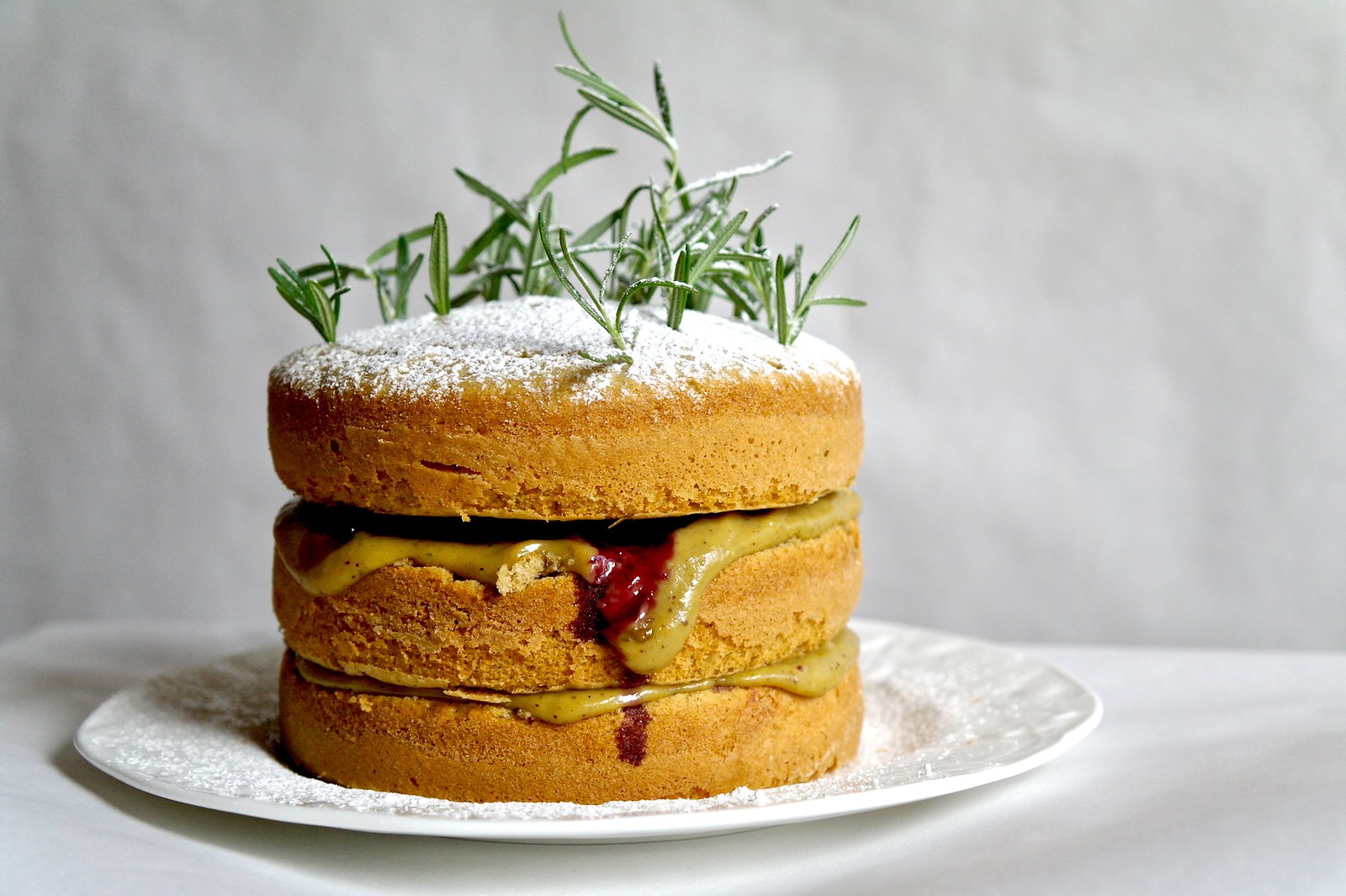 I’ve realized that my younger cousin is one of my favourite people to bake with. She is always up for a challenge and indulges me in inedible onion greens and flavour testing (whereas my mom, when asked for advice, always tells me to “just make it vanilla!” Which I do. Sometimes.) Not only that, but she is rather agreeable, and sometimes even downright enthused, about doing the dishes–a rare and valuable trait. 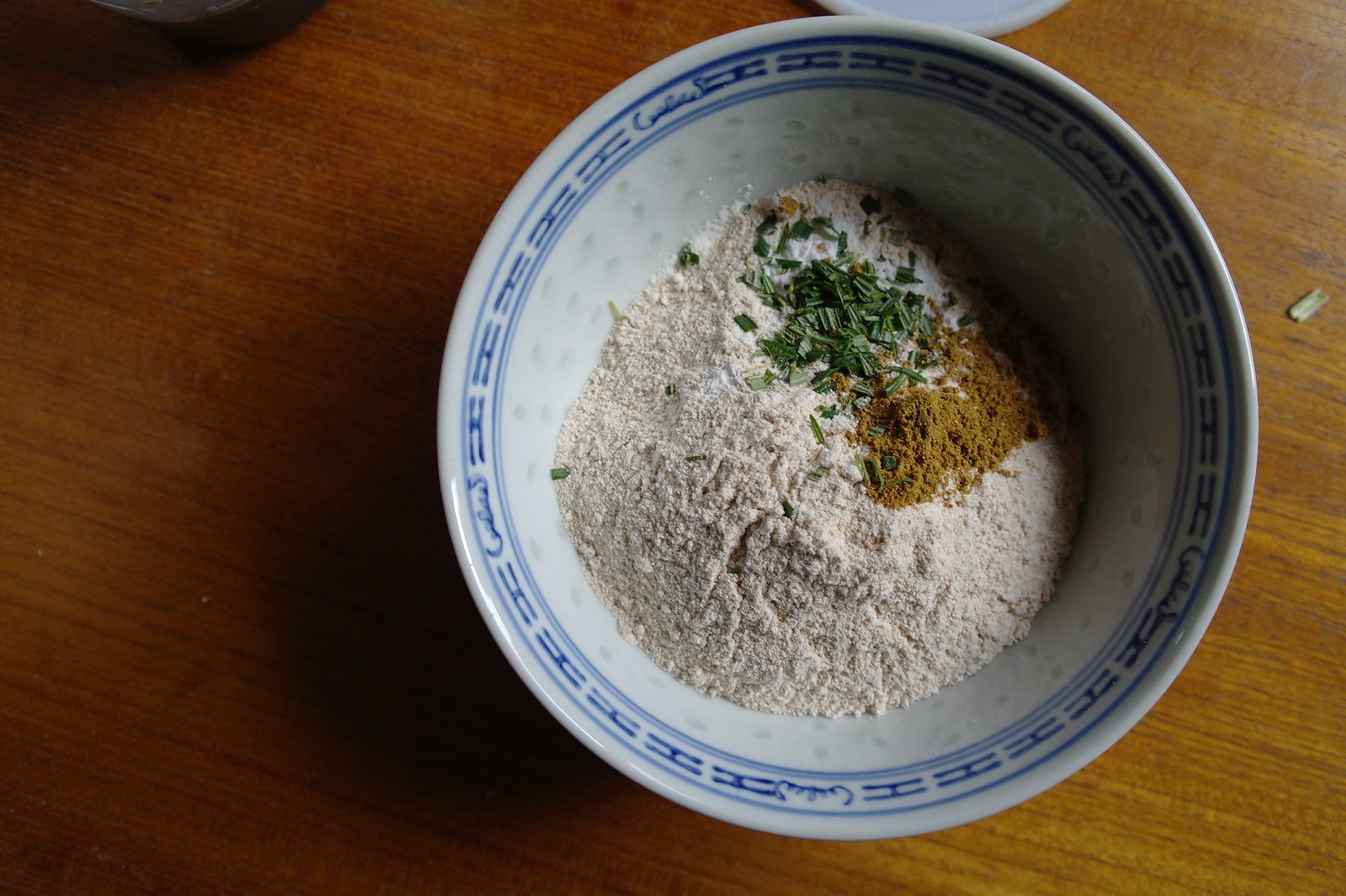 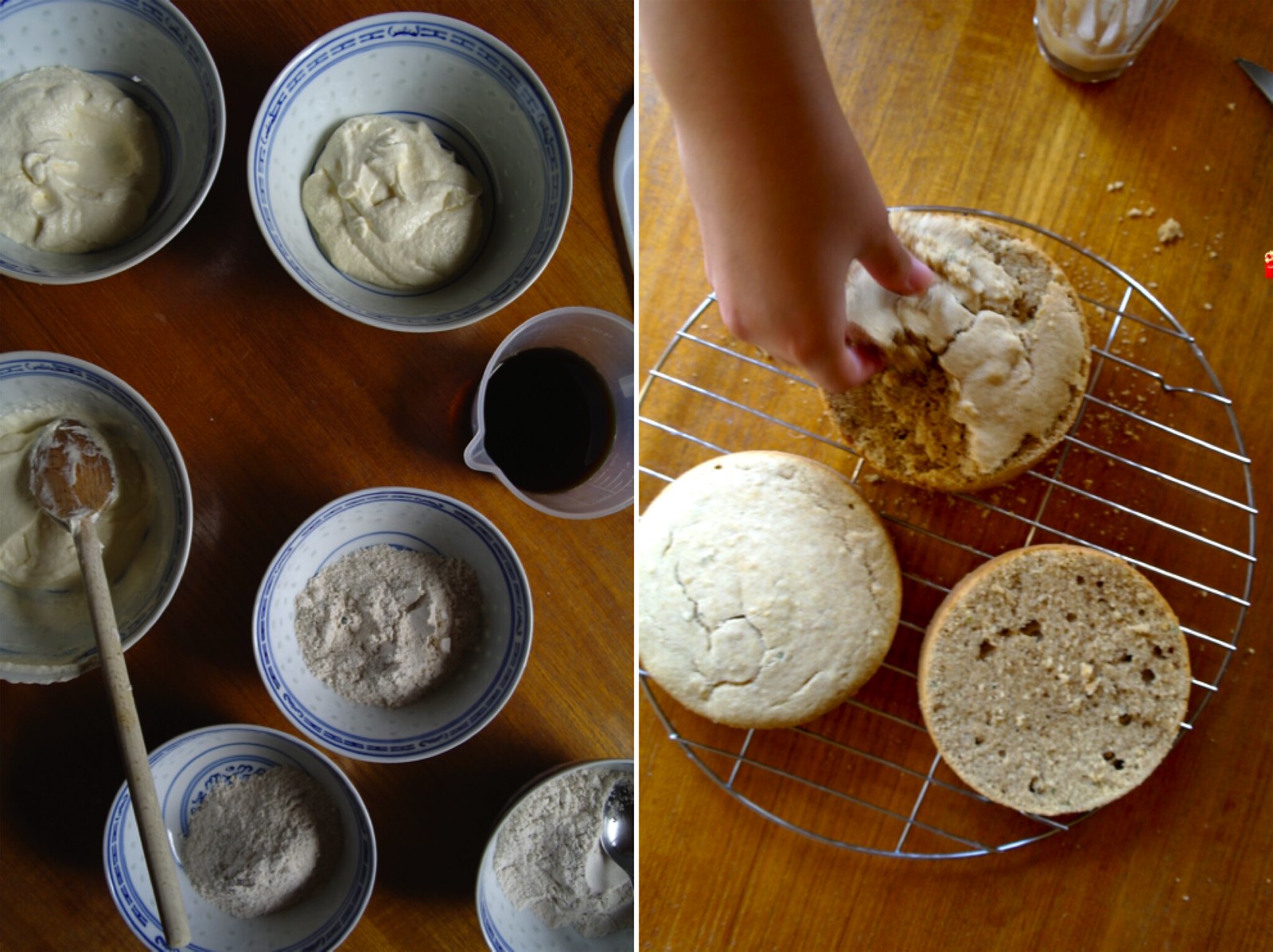 We had another baking day as she was visiting. It was spent mostly with her, up to her arms in detergent bubbles, and me, covered in flour and hands stained with cherry juice. The end product was a cake, which remains to this day the butt of many a joke (they all begin roughly like “Have you made any more herb forests lately?” and unfortunate thing is that for some reason I quite often have.) 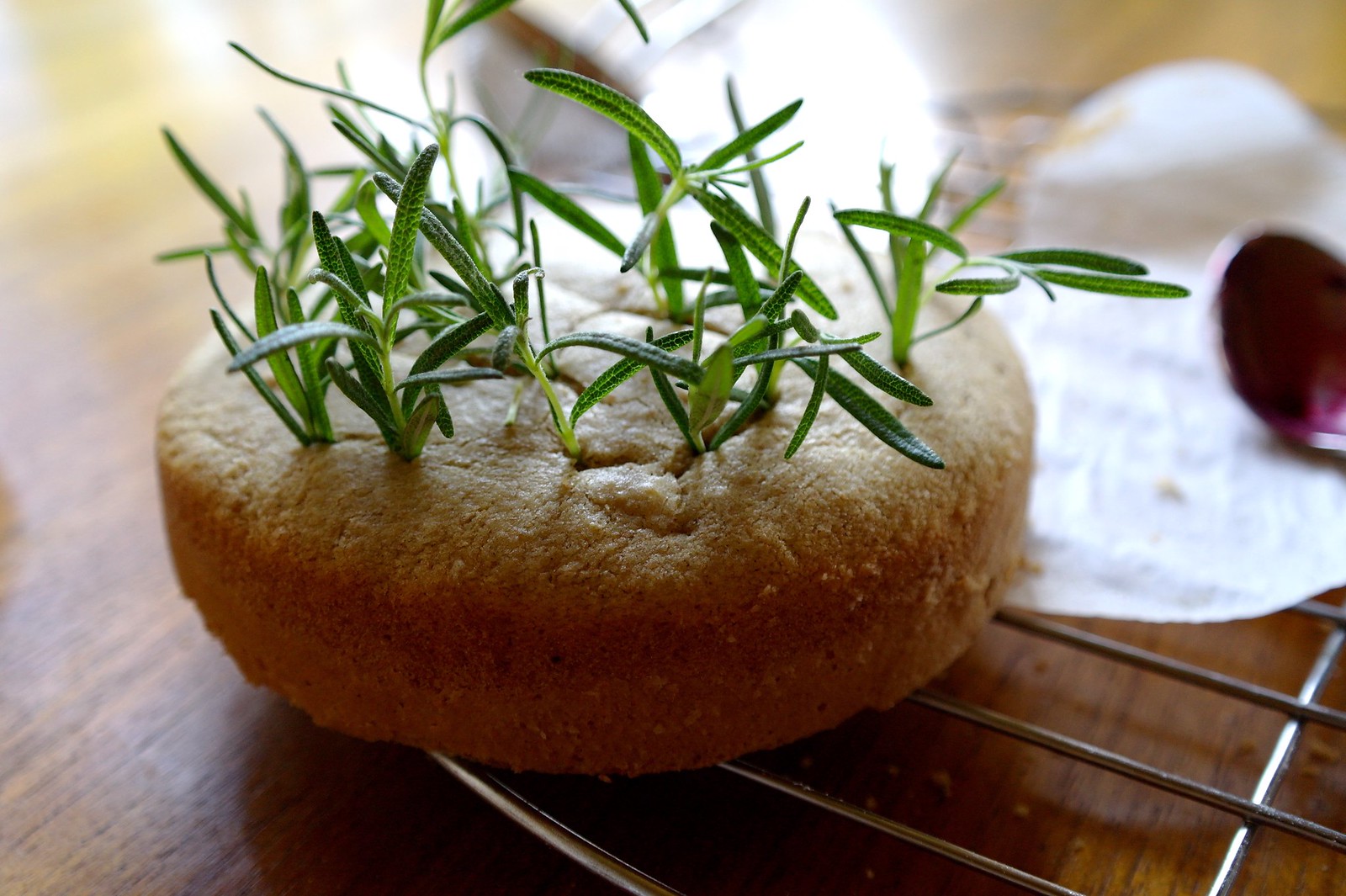 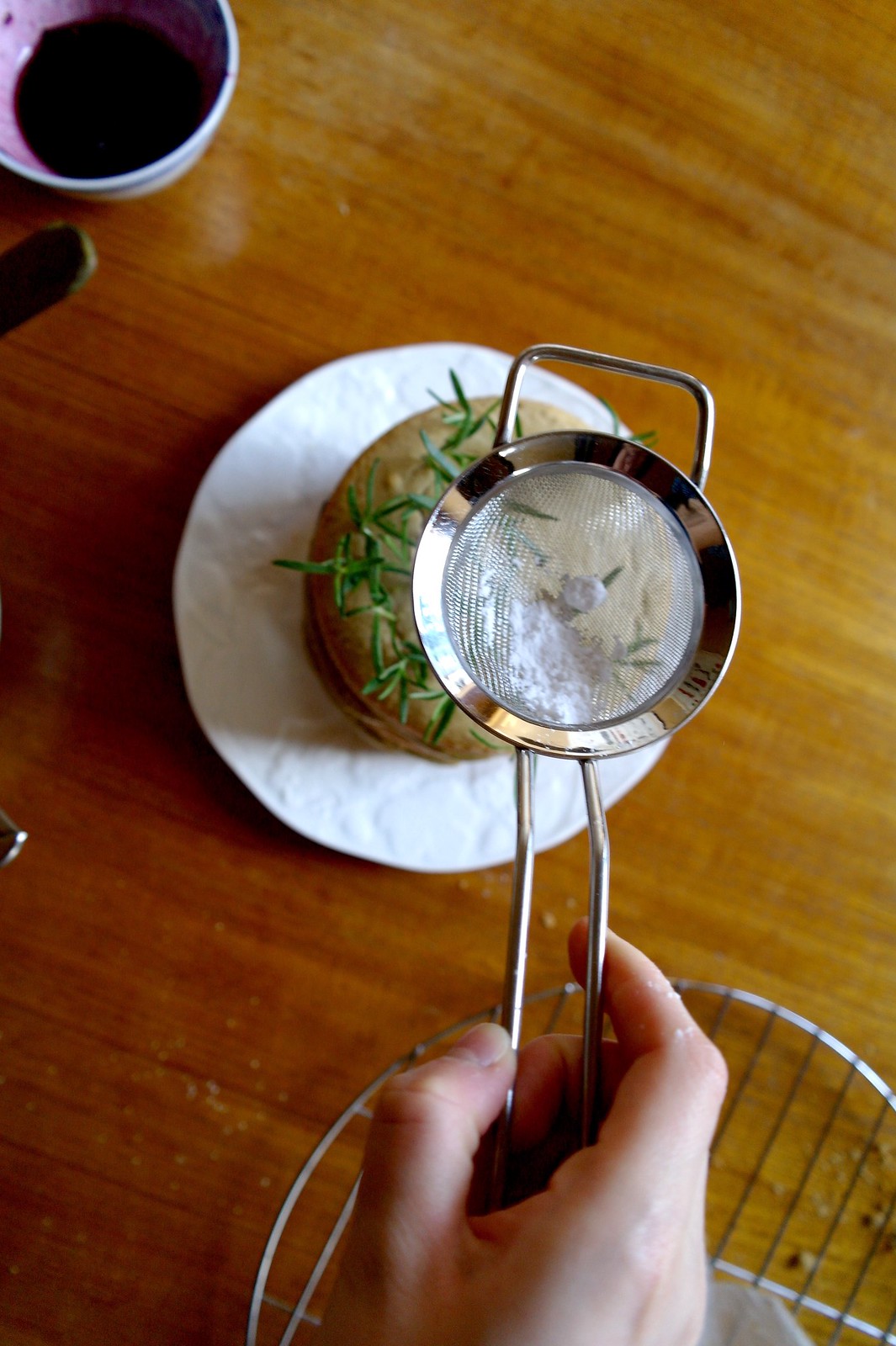 This will sound like a very unfocused cake, and I would agree it is, as there are a number of things going on (red fife flour, rosemary, coriander, coffee, pistachio, brandy and cherry). But I think it is my favourite layer cake (out of the very few that there are) on tentimestea. While there was a lot going on, everything blended together in that way which might be known as confusing but which I prefer to deem as the appropriately pretentious (because I don’t really know what I’m saying) “complex.”

All the components have a bit of heaviness and warmth to them, and there are some repeated flavours so I think it prevents it from being a bit too disparate and unfocused. In fact, in retrospect, there was a bit of a peanut butter-and-jelly theme with the pistachio and the cherry. The result is a cake that is not too sweet (see either pavlova), or too sour (see rhubarb cake) or bitter (see upcoming linzer torte). It was a very smooth and comforting cake, pleasant in flavour and texture, and that is sometimes all you need. 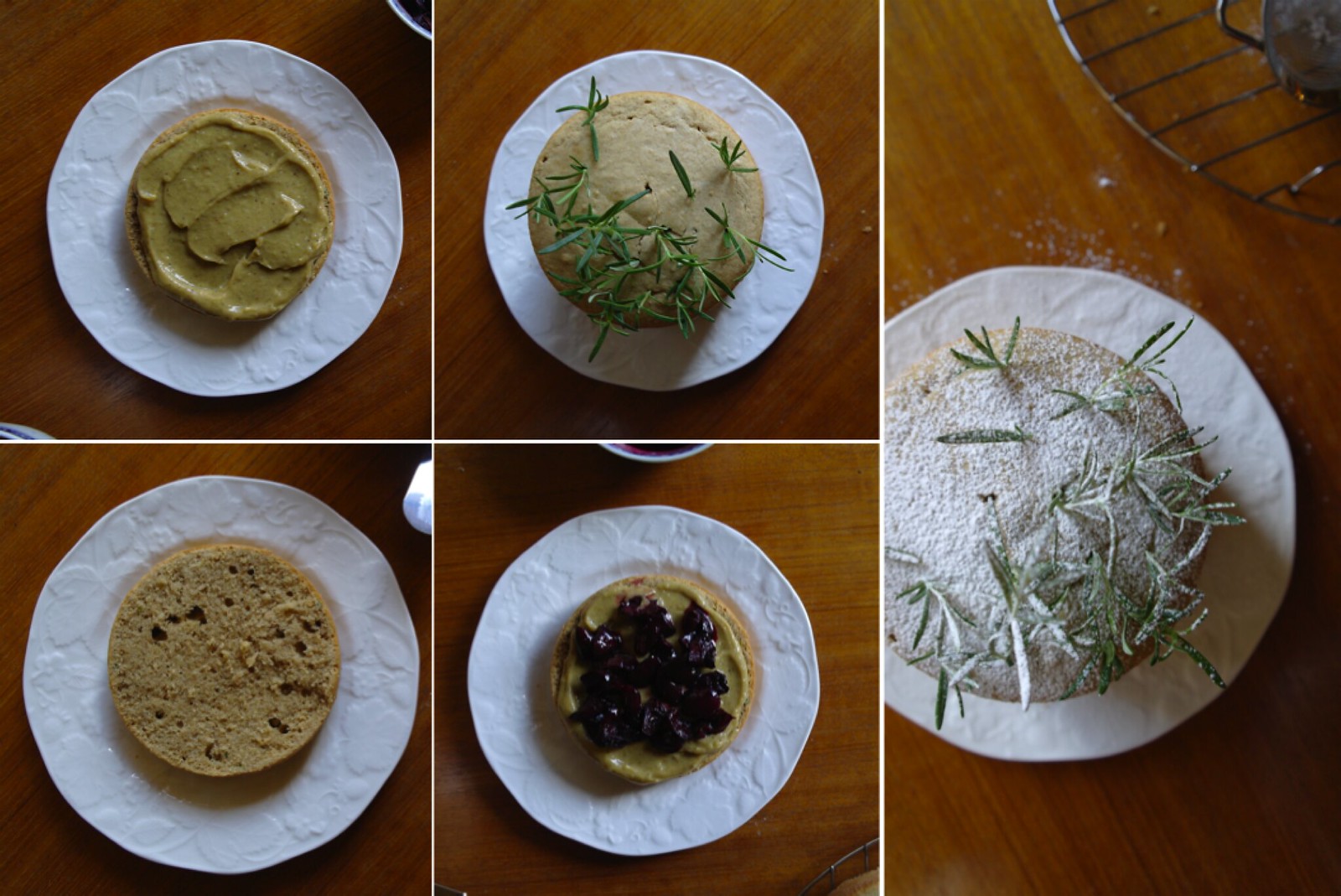 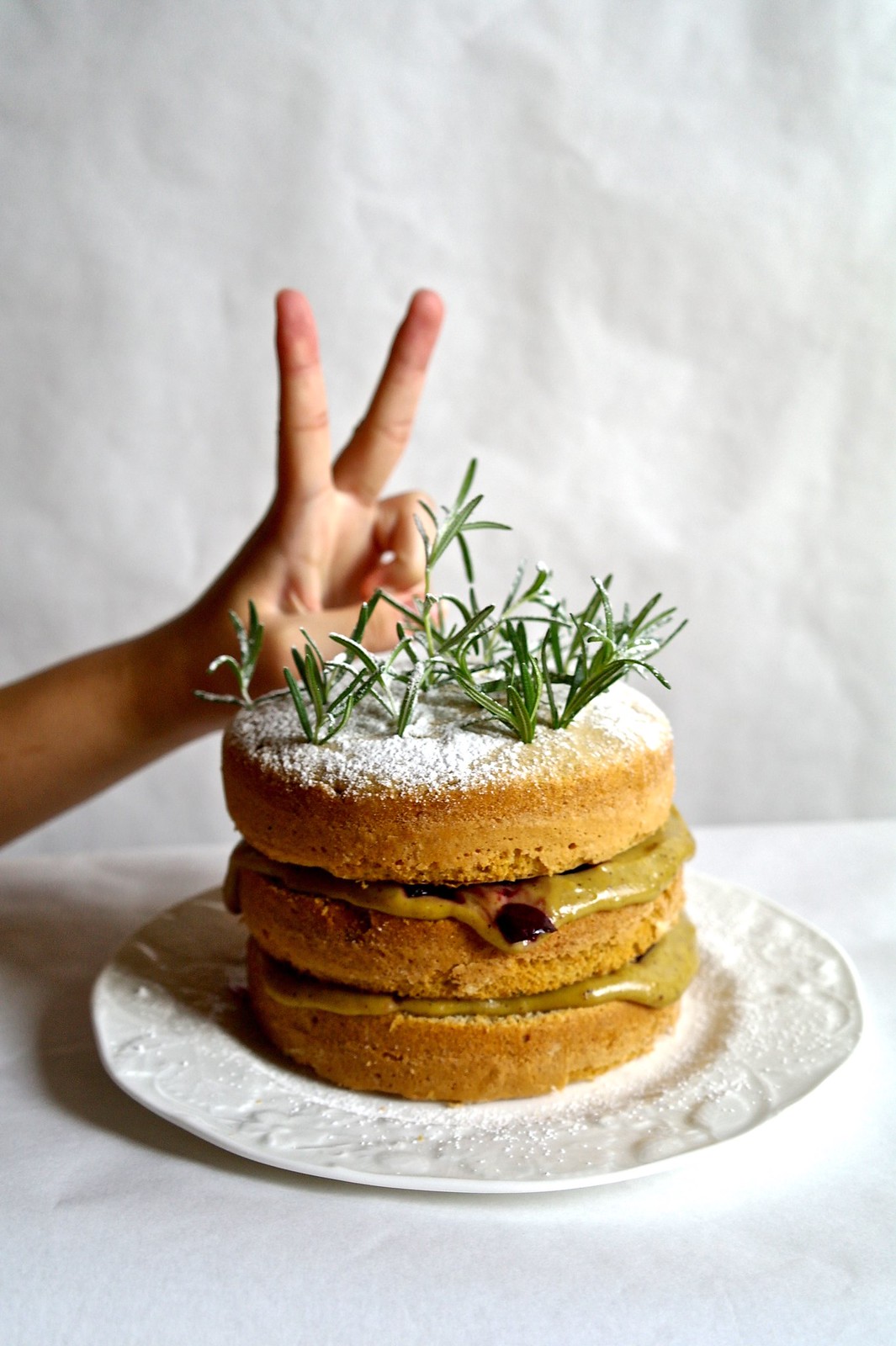 (Here is The Cousin being cheeky.)

But the top did not work out how I wanted it to. I was envisioning a few very tall and proud stalks of rosemary, like skinny snow-dusted coniferous trees. Unfortunately, the stunted and light-starved rosemary plant was having none of this. I decided to compensate for the absent elegance and majesty of the original design by using a handful of short rosemary sprigs (i.e. the rosemary field-of-weeds cake).

The cake had a very nice texture–a bit fluffier, sandy almost, and drier which was appropriate given the sloppiness and moisture of the pastry cream. Splitting the dry-ingredients and the butter-ingredients into thirds and mixing each layer separately just before baking was much more successful than last time’s succession of tough and world-weary cakes. I also tried using some sourdough starter in the style of a sourdough cake I recently saw. 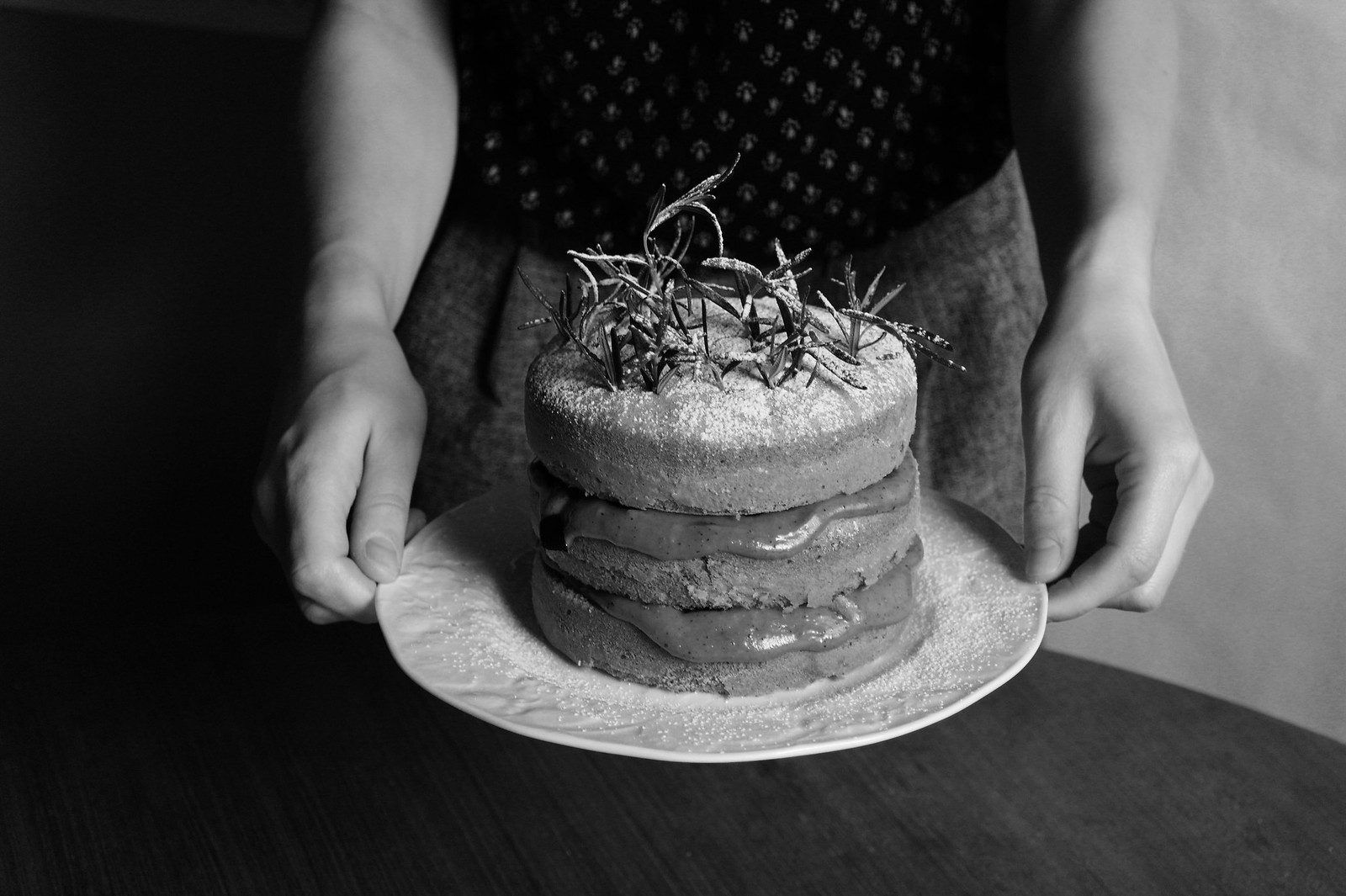 (We tried some artsy photos as well…with mixed results.)

Remarkably, all the flavours seemed to come out–it was fragrant with coffee and somehow you could ascribe coriander and rosemary as well.

I also really enjoyed the cherries. They were quite intense, stewed together with a bit of coffee and brandy. I think they also would have been quite nice on their own with some heavy cream! 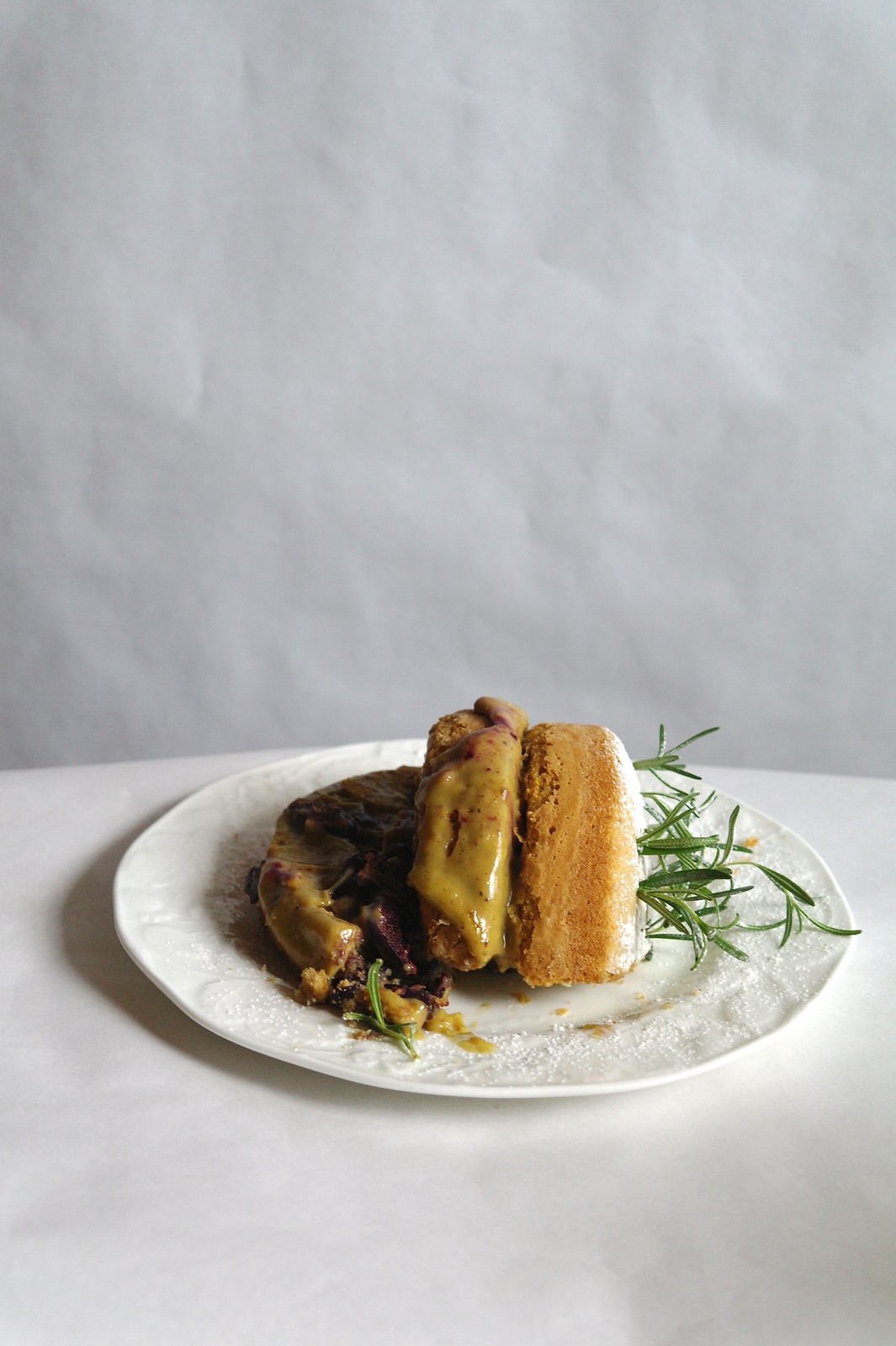 I thought I would bring this to the linkup party Fiesta Friday, hosted by the lovely Angie, the Novice Gardener. It’s been a while (and likewise I also made this cake months ago…)–the last one I attended was back in September, over two and a half months ago. I haven’t looked around too much yet, but just scrolling through the page has revealed a lot of familiar blogs, and maybe some new ones? I’ll look forwards to meeting and visiting some of you!

Makes 1 3-layer 5″ cake. We served eight from it. The coriander and coffee were a bit spontaneous, something I remembered from a suggestion and some advice-! As was the sourdough starter, after seeing this sourdough carrot cake!

This cake is not too sweet so it’s rather nice. Further adapted from a previous adaptation of Rose Levy Beranbaum’s All Purpose Downy Yellow Cake from the Cake Bible.

Preheat oven to 350. Line a 6″ cake pan with parchment paper, butter, and flour.

Cream butter, add sugar and cream until light and fluffy. Beat in eggs one at a time. Then add the sourdough starter and beat very hard until it is nicely combined (if the butter starts to cool down and clump up, warm up the mixture a bit over a pot of steaming water and keep beating). Beat in the salt and vanilla.

Whisk together the flours, baking powder, coriander and rosemary.

Divide the butter mixture into three, by mass. Do the same for the flour mixture.

Bake the cakes one third at a time: Add half the flour to the butter mixture. Add two tablespoons of coffee. Add the remaining flour. Scrape into the cake pan, and bake for around 18 minutes.

Let the cake cool for a couple minutes in the pan, then remove and let it cool on a wire rack. Wash the pan, butter, flour, and line with paper.

Repeat to bake the remaining layers.

This pastry cream is adapted from my other adaptations of pastry cream on here (some yet to be published and others quite published) and I really can’t keep track. It ended up being looser than I intended…a bit like last time, so unfortunately I didn’t learn from my mistakes!

Whisk together egg, cornstarch, and sugar until light. Heat milk and cream until scalded, add to egg mixture whisking. Return to a saucepan over moderate heat and cook, whisking continuously, until thickened.

Press through a sieve. Beat in the praline paste until smooth.

The more cherries the better!

1 bowlful of cherries, pitted and quartered

Add all ingredients to a small saucepan. Cook gently until cherries are softened but not mush.

Slice the top off of two cake layers to even the surface. Spread with half the pastry cream, top with one third of the cherries (drain the juice). Add a second layer and repeat.

Place the last layer on top, poke the rosemary sprigs into the crevasses of the cake and dust generously with icing sugar.