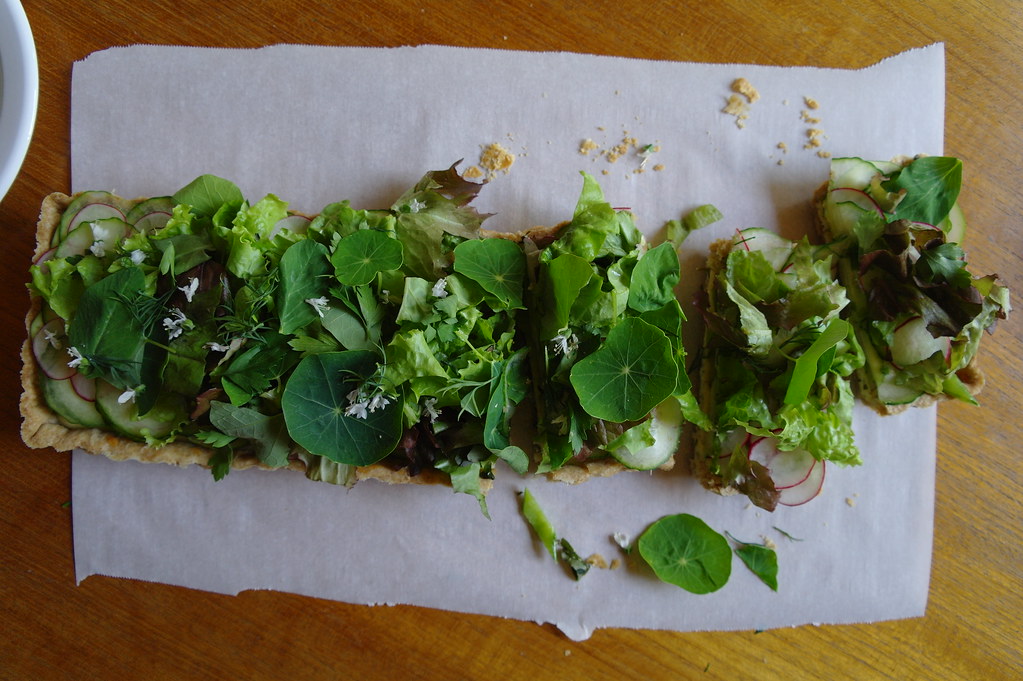 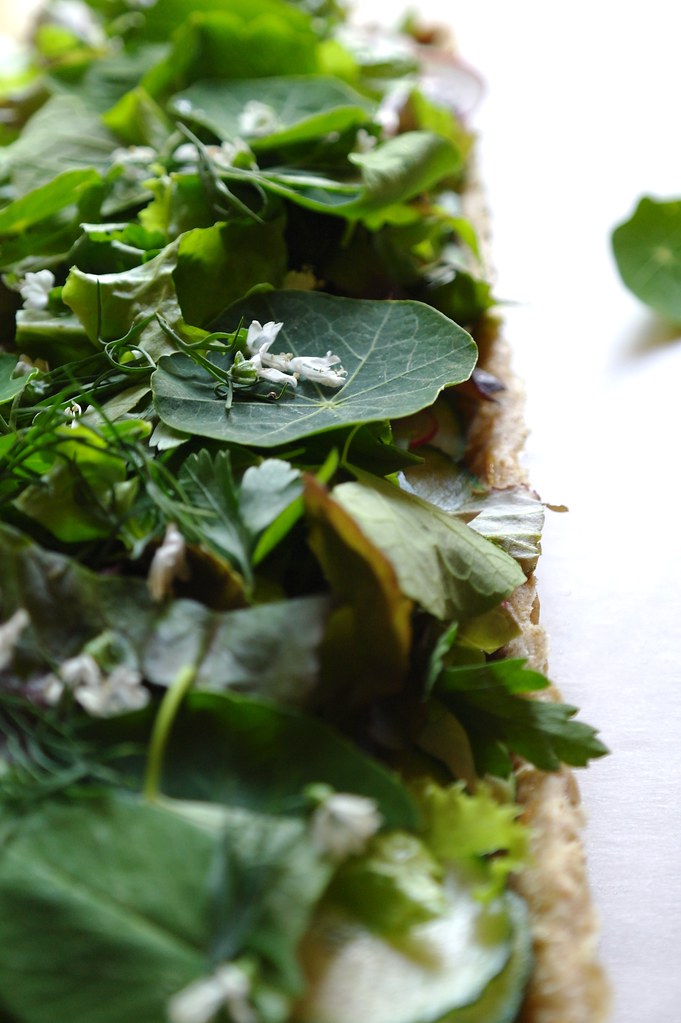 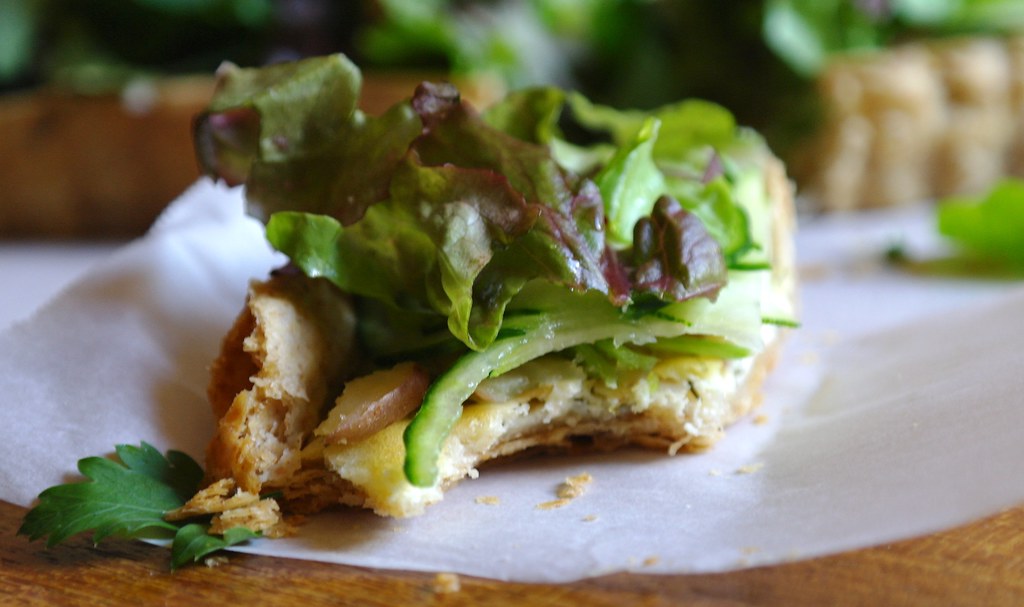 This tart is based off one from one of my favourite food blogs, the Little Library Cafe. All the recipes take some inspiration from literature. Sometimes it is right out of the story (see Matilda’s massive chocolate cake), sometimes it is a reinterpretation or reimagination (this lemon and almond cake with “time”–or rather, thyme–from the Amber Spyglass).

I enjoy all of the posts, but this one, Mr. McGregor’s tart, was one of my favourites – it takes the inspiration and then transforms it, projecting it into a seamless and perfectly natural extension of the literature. We go from his bountiful garden to a lush and generous tart, either of which Peter Rabbit would probably quite enjoy. 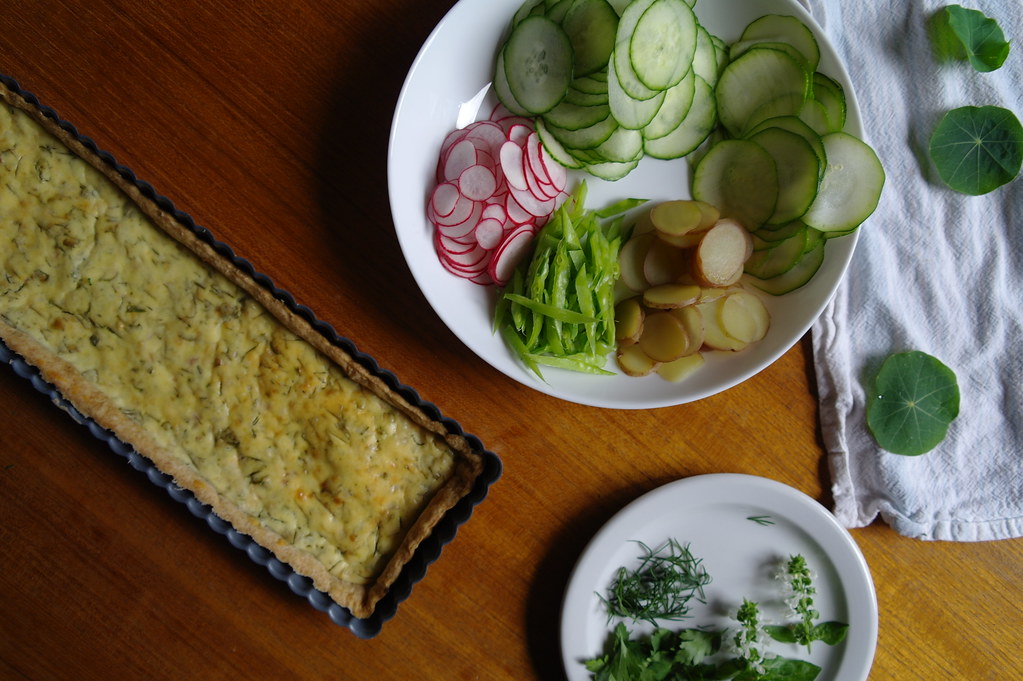 The tart can feature whichever vegetables you have on hand, thinly shaved and sliced on top, and whichever herbs, mixed into the filling. It looks as though the layer of vegetables is quite fluffy, for the most part with all the leaves, but it is at a decent proportion to the tart base and filling. I think I might have put on a bit much, but the most enjoyable thing about this tart is how centred it is on the generous amount of vegetable piled on top. 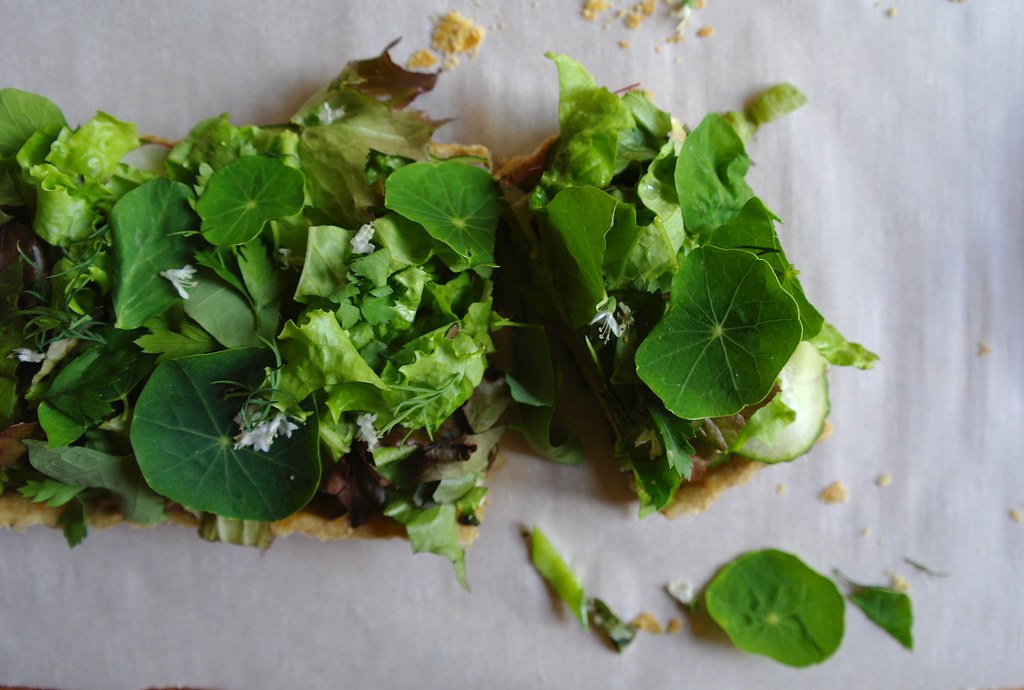 The layer of vegetables isn’t seasoned, however, when you eat it in a bite with the salty filling, the amount of seasoning is very good. Though, I might consider putting a slightly less dense layer of vegetables on the bottom…there I piled on the potatoes and peas and cucumbers and radish and zucchini.

Hopefully it’s not too late to post a summer-y vegetable tart. I’ll bring it to Fiesta Friday, Angie’s (the Novice Gardener) weekly food party anyhow (a bit earlier than usual!). This week is co-hosted by Effie (Food Daydreaming) and Steffi (Ginger and Bread)  so I know it’ll be absolutely lovely (as it is every week!). 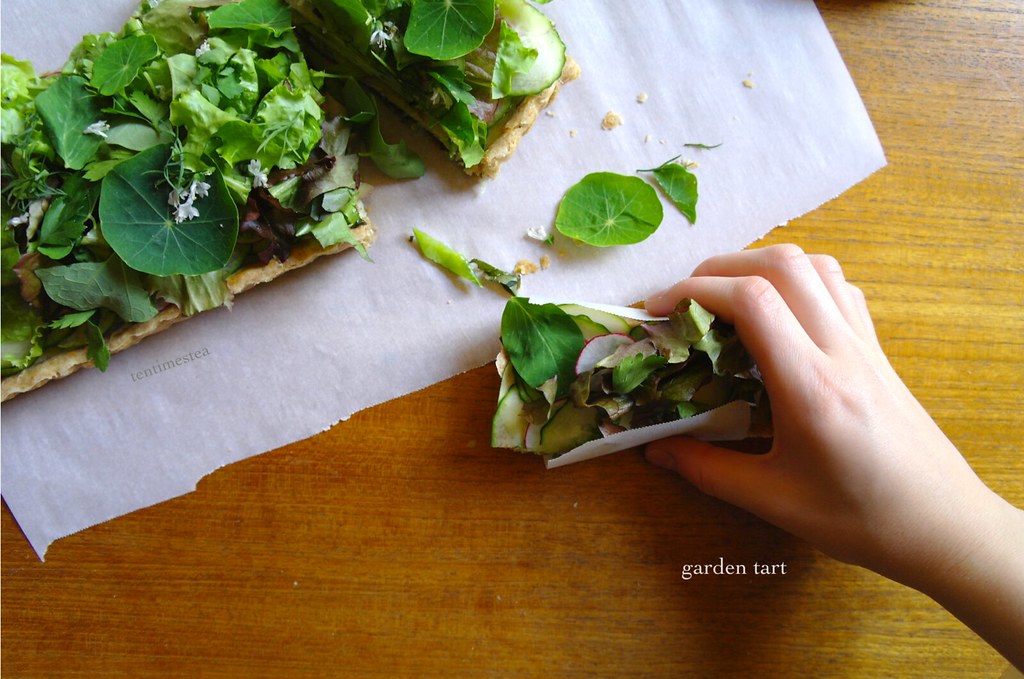 To line and fill one long tart pan.

Chop the shallots finely and cook in butter until soft and translucent.

Beat the cheese and eggs together until smooth, then add the shallots.

Pick the leaves from the thyme, and chop the parsley leaves, chives, and dill. Add to the cheese mixture.

Roll out the dough 1/4″ thick on a floured surface. Drape into the pan, press in, and remove the excess. Spread the cheese mixture on the bottom.

Bake 35 minutes or until the filling it very set and perhaps lightly browned on top, and the crust is fully cooked.

half young zucchini (younger the better)

Thinly slice the potatoes and cook until tender in salted water. String the snow peas and slice thinly on the bias. Use a mandoline on the thinnest setting to slice the zucchini, cucumber, and radishes. Chop the lettuce leaves, tear large nasturtium leaves and pea shoots into pieces. Pull the parsley leaves from the stem and pull apart the dill sprigs into small fronds.

Lay the slices of potato on the tart base, followed by the snow peas. Then layer on the sliced zucchini, then cucumber and radish. Finish by lightly piling some of the lettuce, nasturtium leaves, and pea shoots. Garnish with the parsley, basil flowers and dill.

Slice into pieces and serve.