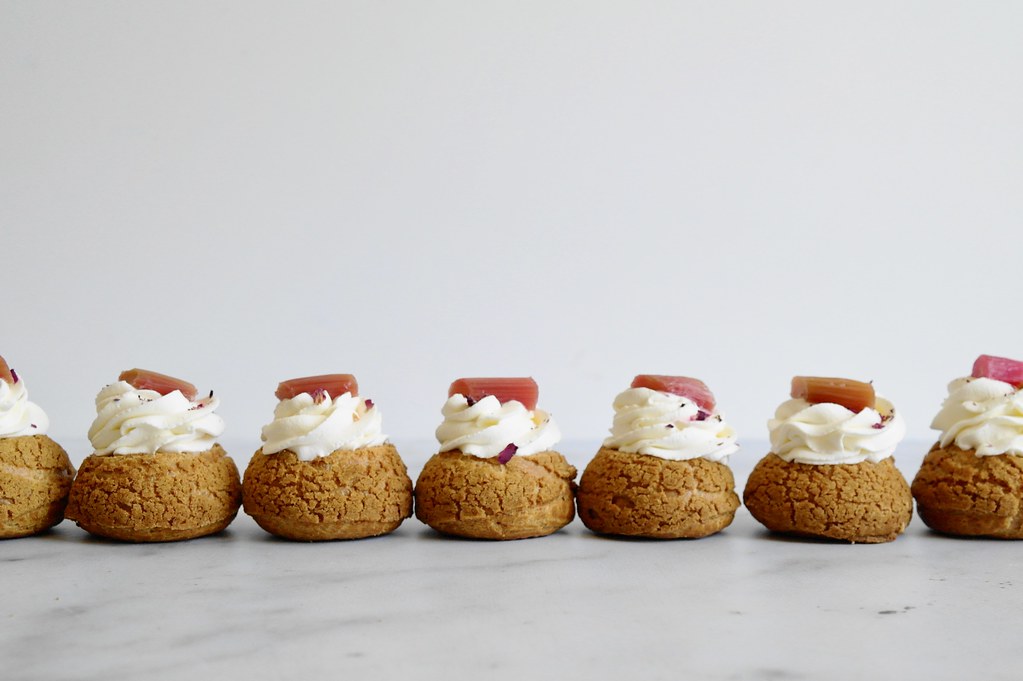 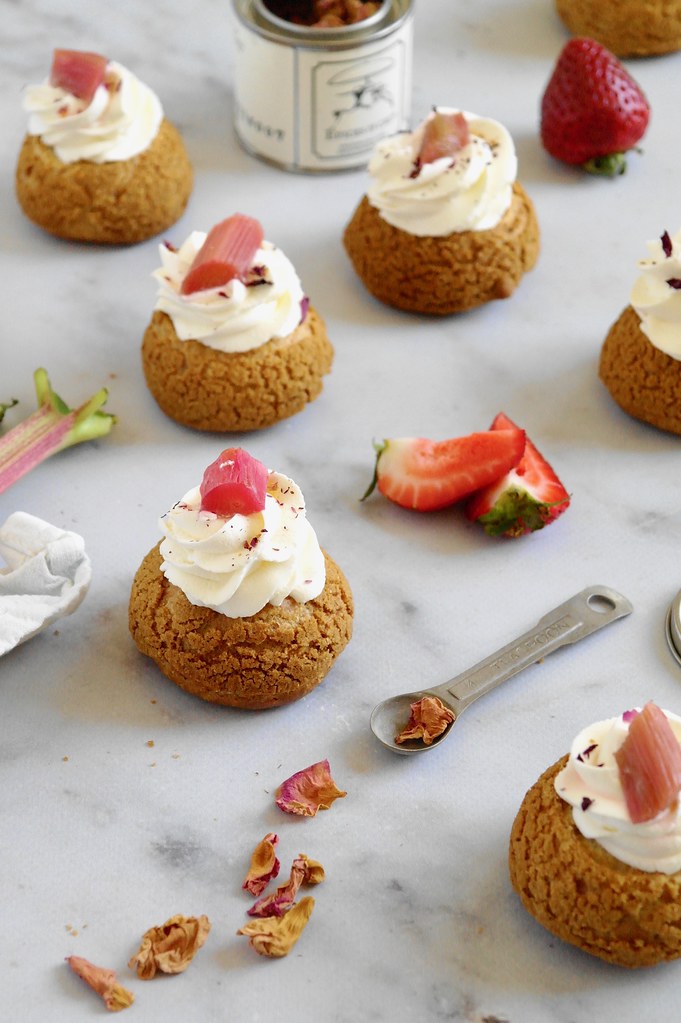 Generally I am slow at posting what I make (average delay of a couple months to a year). This is no exception: rhubarb season has passed, but I’ll slip this in anyways… and there may be more rhubarb recipes coming even later!

These cream puffs are filled with a slightly tart and rather buttery rhubarb and rosewater curd, which I thickened with a bit of gelatin to help it hold its shape. As a more refreshing counterpoint, I piped a small dollop of loose strawberry jam in the centre. Lastly I piped a couple swirls of whipped cream over top and finished with a slice of poached rhubarb.

While I enjoyed the filling, I think layers of rhubarb jam and a vanilla rose pastry cream would do the trick just as well, if not better. Rhubarb is quite mild in flavour so it doesn’t come across very strongly in the form of a curd. 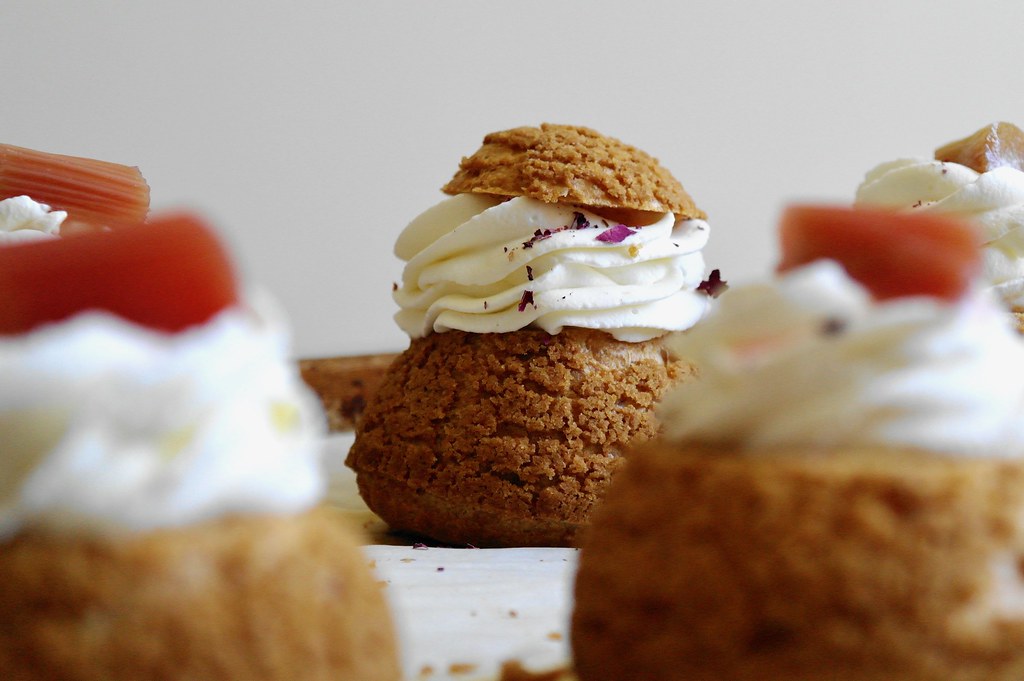 One of the last times I made cream puffs, I spent the course of several paragraphs complaining about how my craquelin did not completely cover the puff. There are a couple of solutions: easiest is to recognize that incomplete coverage more noticeable with a coloured craquelin – on the other hand, plain craquelin blends in quite well with the colour of the cream puff itself.

As for actually maximizing the coverage: it seems to require a bit more attention to the dimensions of the pastry and the craquelin. This time I cut the craquelin about 0.5cm larger than the size to which I piped the choux. I expect this is not a hard and fast absolute relationship, but a 0.5cm size difference works quite well for choux pastry piped to 4.5cm diametre.

Essentially, you want a craquelin round that is big enough to cover the unbaked choux pastry. Next time watch a batch of choux a craquelin as it bakes. First the craquelin will soften in the heat of the oven, the edges will droop and it will drape down to cover the cream puff. Where it lands, it will adhere, so it is at this step we want it to completely cover the mound of choux pastry. As the choux pastry expands beneath the craquelin, the cookie layer will fragment apart to accommodate the pastry’s growth.

The trickiest part of all of this is actually just finding the right size cutters. Look at all the circular things in your kitchen – bottle tops, jars, cookie cutters, ring molds. To trace 4.5cm circles for the choux I used the cap that once came from a bottle of amoxicillin (banana-flavoured, huzzah), and found a cookie cutter that measured 5cm across for the craquelin. 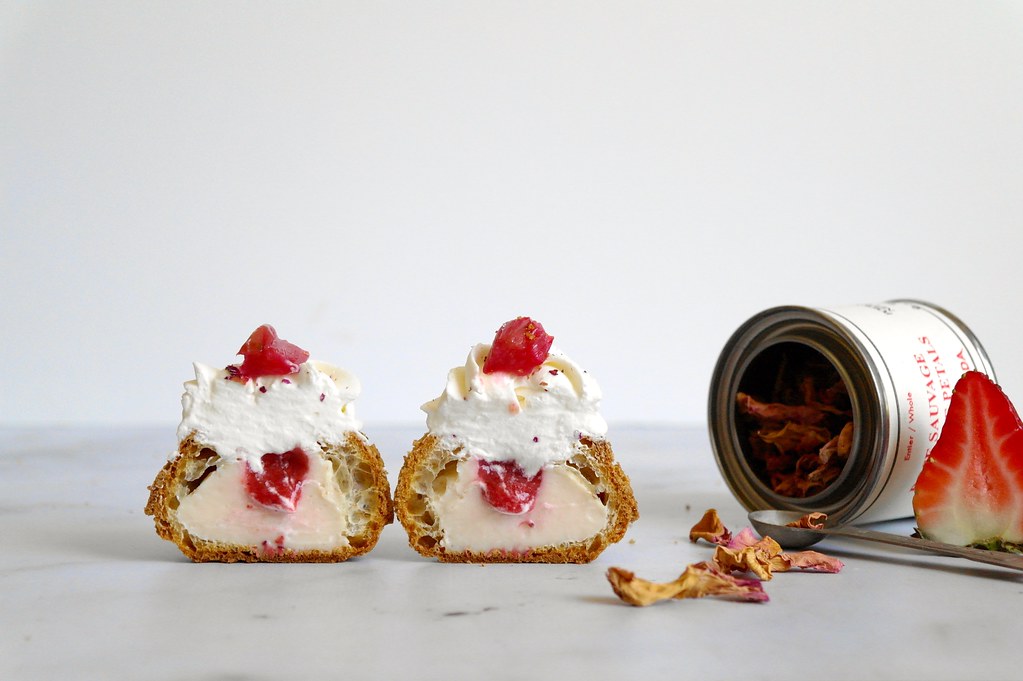 NOTE: When it comes to rhubarb curd, unless your rhubarb is rather pink, the colour can turn out rather yellow due to all the egg yolks. This time around my rhubarb was pink enough that I didn’t need to boost the colour. However, other times when the rhubarb is a bit lacking in colour I do one of the following: 1) use some strained strawberry puree in place of some of the rhubarb juice or 2) throw some dried hibiscus flowers into the rhubarb curd as it cooks or or 3) stir a bit of pomegranate juice in the rhubarb curd at the end.

For the craquelin, mix all ingredients together until it forms a cohesive dough. Place the dough between two sheets of parchment and roll out to a thickness of 1-2mm. Slide onto a pan and freeze until firm.

For the choux pastry, preheat the oven to 400F. Line a baking pan with a sheet of parchment paper – on the backside, trace twelve 4.5cm circles.

Place the butter, milk, sugar and salt in a saucepan and bring to a boil. Add the flour and quickly mix in with a wooden spoon. Lower the heat and continue to cook the mixture until it forms a ball. Remove the pastry from the heat and let cool a bit before adding the egg.

Beat the eggs in a small bowl. Add a bit at a time to the pastry. Assess the consistency of the dough after each addition of egg and stop once you’ve achieved the right consistency. I find it easiest to begin beating in the eggs with a wire whisk and then transition back to stirring with a wooden spoon once the batter loosens. The dough should be shiny, but not fluid (if its something a bit new to you, look up a video or a more detailed tutorial for the right consistency – such as looking for the “triangle” of dough!). Importantly, you don’t need to use all the egg – or you may need a bit more or less!

Transfer the pastry to a piping bag fitted with a large round tip. Pipe mounds of pastry onto the 4.5cm circles. To make the size consistent, I position the piping bag a little ways above the pan (1-2cm or so – it will be quite natural!) and pipe until the mound of dough nearly fills out the circular guide drawn on the parchment. I avoid lifting the piping bag further up as I pipe – if you do that, you end up with a larger and taller mound of pastry and the size will not be as consistent.

Take the craquelin out of the freezer and cut 5cm circles from the dough. Top each puff with a round of the craquelin.

Bake for 10 minutes at 400F, then decrease temperature to 375F and bake about 30 minutes more or until well browned. You can rotate the puffs after they’ve been in the oven for 20-25 minutes or so, once there are no worries of them deflating. As soon as you can handle the puffs, cut a small slit on the bottom of each puff to let the steam release and let cool on on a wire rack.

For the strawberry jam, combine the chopped strawberries, sugar and a spoonful of water in a small saucepan. Cook until strawberries are soft. Add the pectin and bring the mixture to a full boil. Remove the jam from the heat and puree with an immersion blender (alternatively, use a food processor). Transfer to a container and chill completely.

Then make the rhubarb juice. Place the chopped rhubarb in a saucepan along with around half a cup of water. Bring to a boil then simmer gently until the rhubarb very soften throughout. Try not to stir too much, especially as the rhubarb becomes more delicate. Pour the mixture into a jelly bag and allow the juice to drip out. Once the rhubarb mass in the jelly bag has cooled enough to handle, also squeeze to extract as much juice as possible.

Measure the amount of rhubarb juice – we want 180g (or mL) or 3/4 cup. You’ll probably have more, so estimate by how much you’ll need to reduce the juice to obtain the right amount (rhubarb is not super strong tasting so it’s best to reduce down the juice for a stronger curd. For instance, I ended up with one cup so I tried to reduce the juice by 1/4. Transfer the juice to a small saucepan and simmer to reduce, then remeasure.

For the rhubarb rose cream, in a saucepan combine the rhubarb juice with the sugar and eggs. Whisk together and start warming up over medium heat. Melt in the butter a chunk at a time. (NOTE: at this point, observe the colour of your curd! The rhubarb I was using was sufficiently red that my mixture was still a pale pink, but it always depends on the rhubarb you have. If yours has lost any pinkness, refer to the note at the beginning of the recipe for ways of making pinker rhubarb curd).

Once the butter is melted in, lower the heat and cook gently (don’t let it boil!) until curd is thickened. Take off the heat and pass through a strainer. Stir in the rosewater (at this point you can taste for amount of sugar and rosewater). Chill the cream.

Melt the bloomed gelatin in the microwave. Whisk a bit of the curd into the gelatin until smooth (if it lumps, microwave to remelt all the gelatin) and add back to the rest of the curd, whisking it in thoroughly. It’s easiest to fill the puffs before the cream sets, so use within an hour.

To assemble, slice off the top of each puff. Spoon the rhubarb cream into each puff to fill them about 1/2 cm from the top.

To garnish, whip the cream until stiff with a bit of granulated sugar and the vanilla extract. Transfer to a piping bag fitted with a star tip. Pipe swirls of cream on top of each puff.

Crumble some dried rose petals and sprinkle over the cream.

Place a piece of poached rhubarb on top of each puff. I made the poached rhubarb by slicing up a stalk into ten pieces and simmering it with sugar in water for around 4 minutes (2 minutes on each side), then allowing it to cool in the syrup. Rhubarb can disintegrate easily if overcooked, so keep to these times!