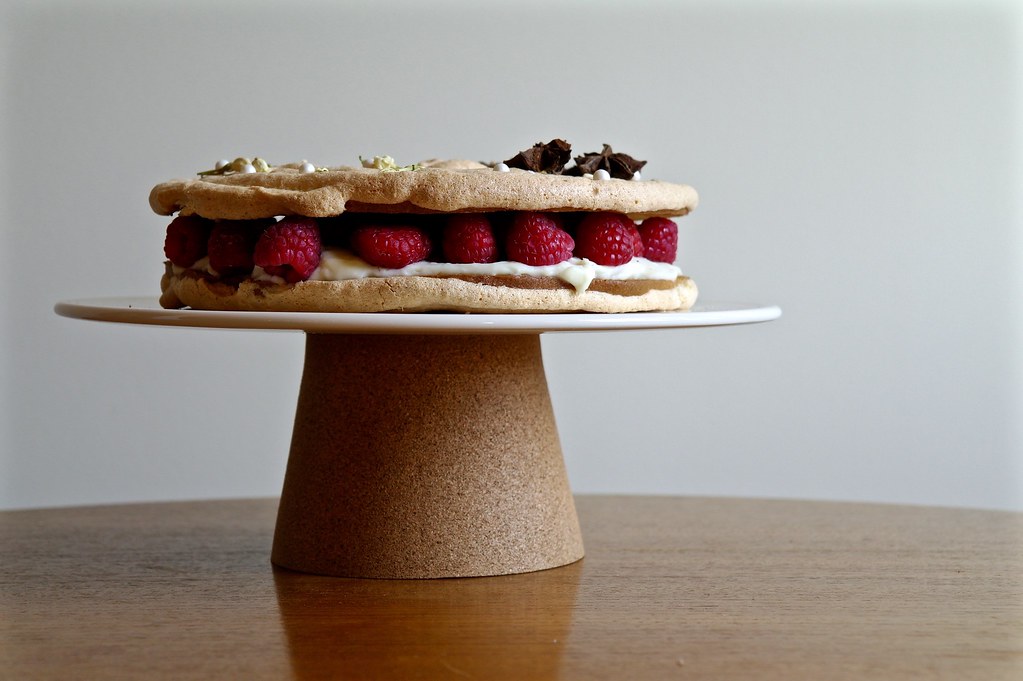 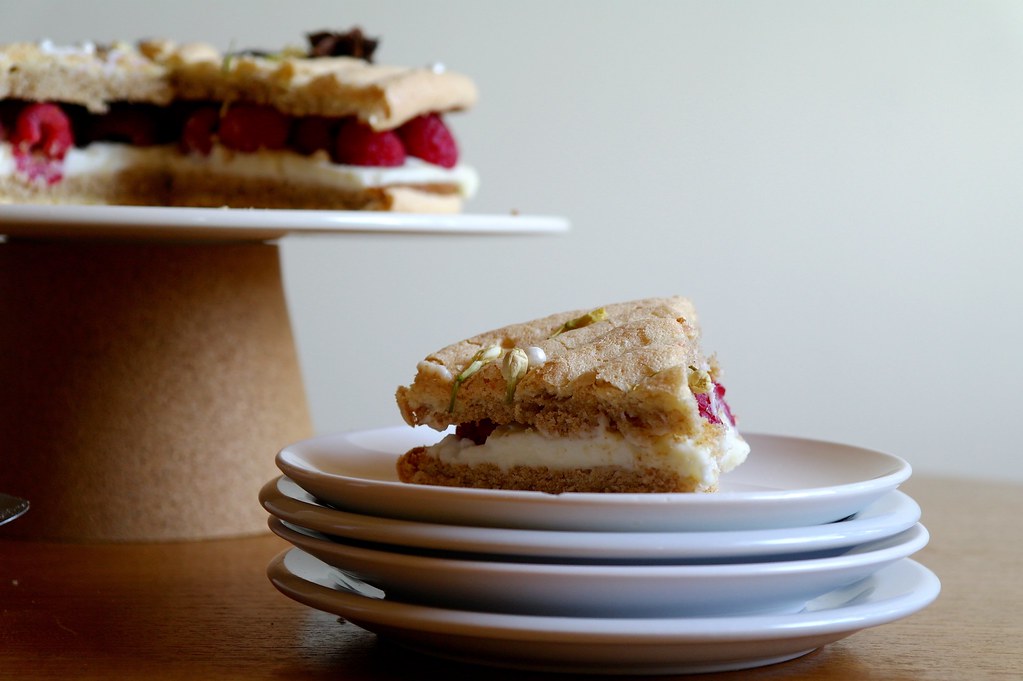 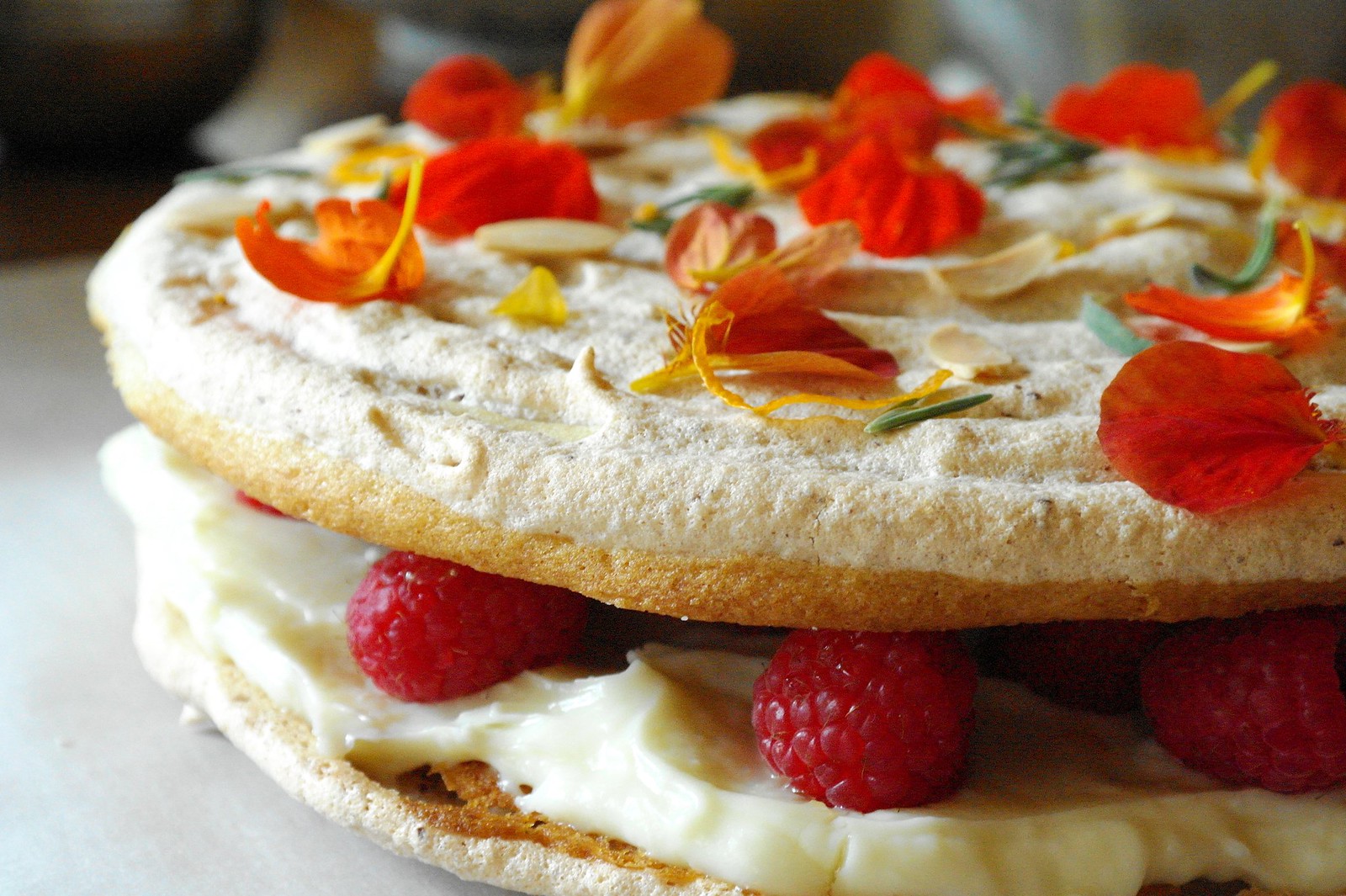 So I’ve been telling myself this for the past few weeks and yet nothing much has happened. I think I’ve developed this reticence either in the form of a clinging sloth-like laziness I haven’t managed to shake off, or blog-shyness, just as bad as when I first started blogging. Perhaps it’s both combined

I did have some rather good reasons to not blog: exams and travels. Now it’s back to routine, and hopefully I’ll be able to integrate ten times tea back into the schedule as well. (Say, do you have a blogging schedule? Is it helpful? ) 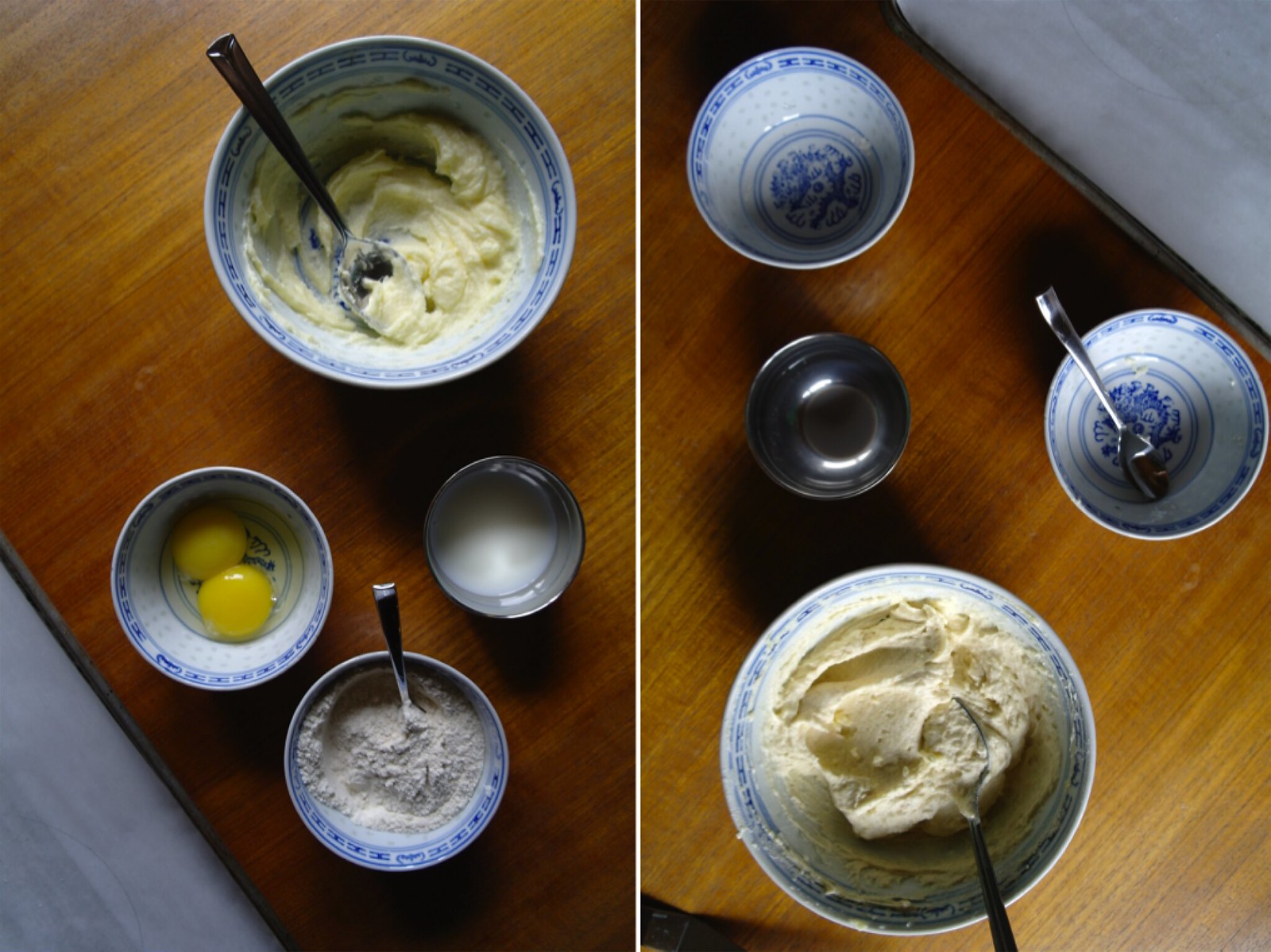 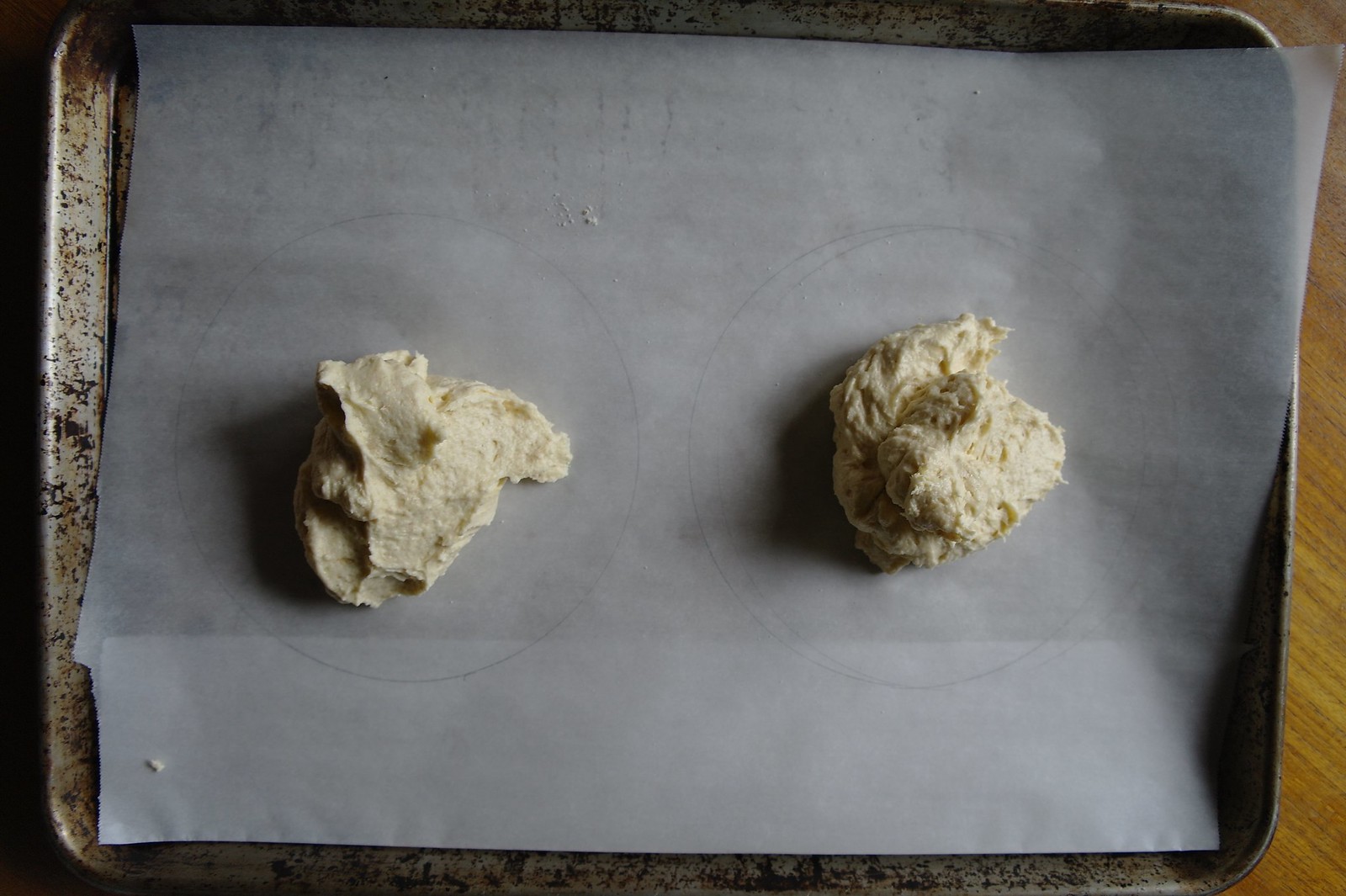 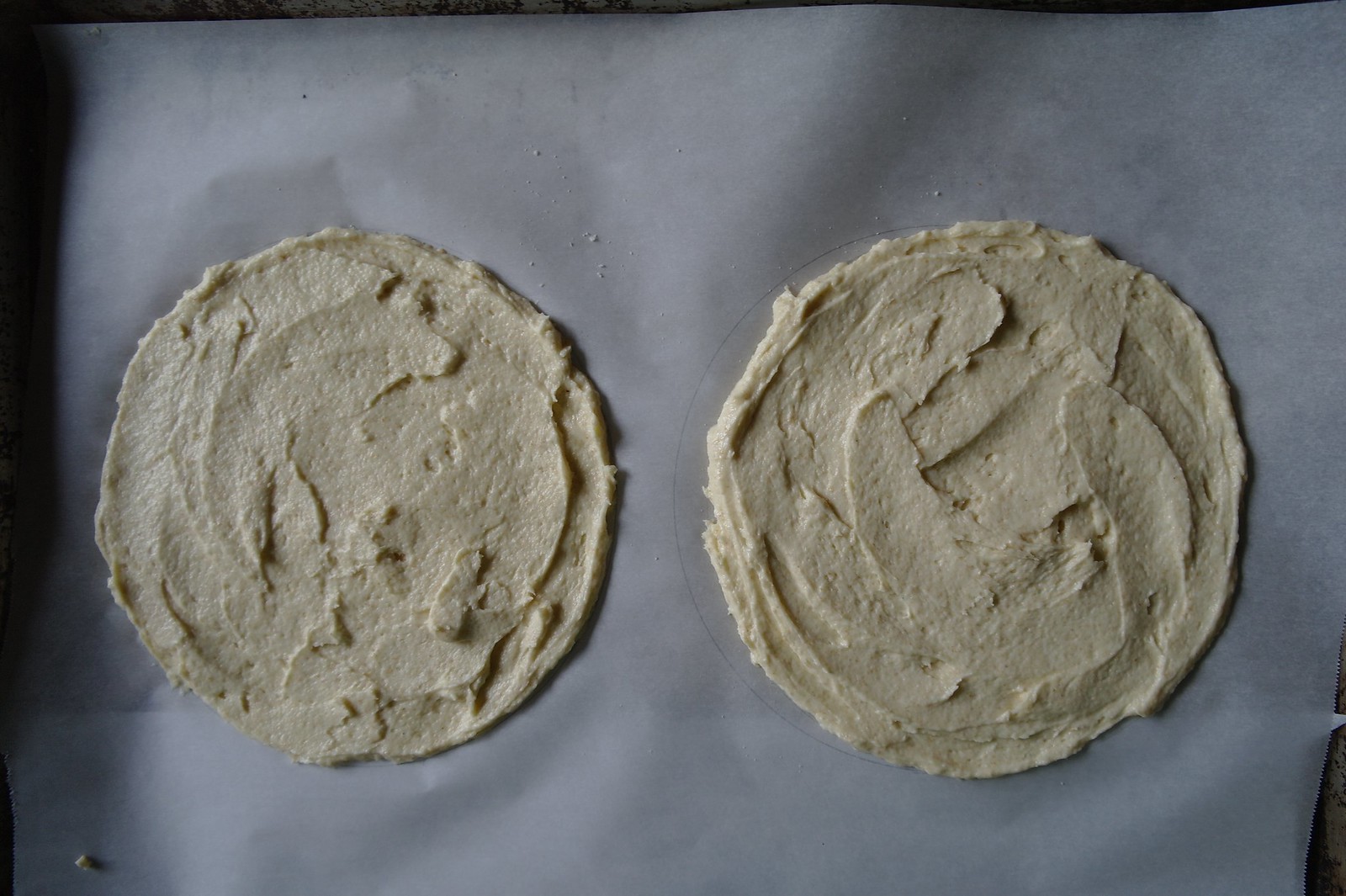 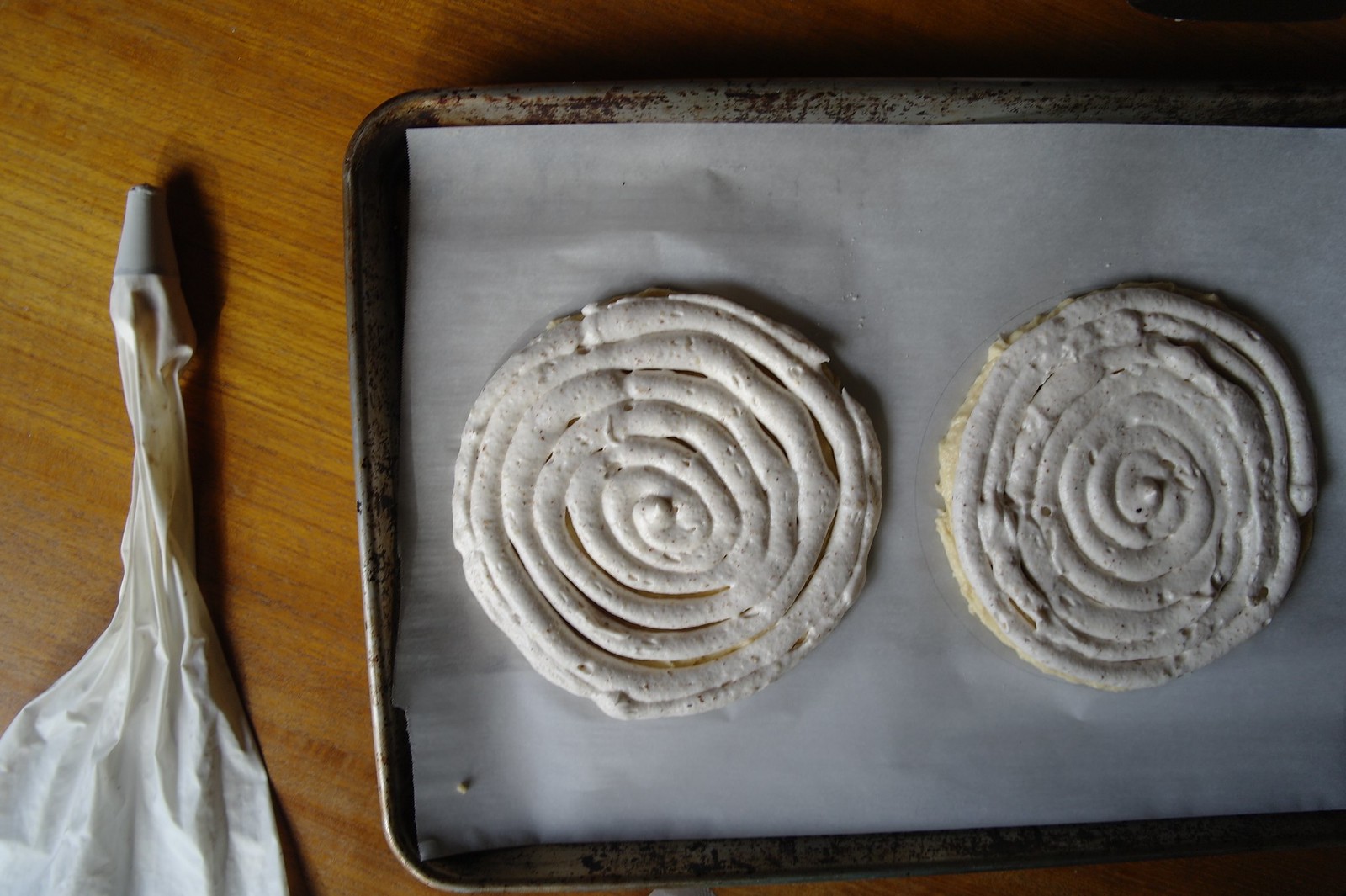 This may be one of my favourite cakes that I’ve made.

The fact shouldn’t have surprised me, I suppose. Apparently the kvæfjord cake is fondly considered as the world’s best cake (not to mention, also as a testament to the Norwegian spirit.) This is a version I’ve adapted, with anise, cardamom and raspberries. 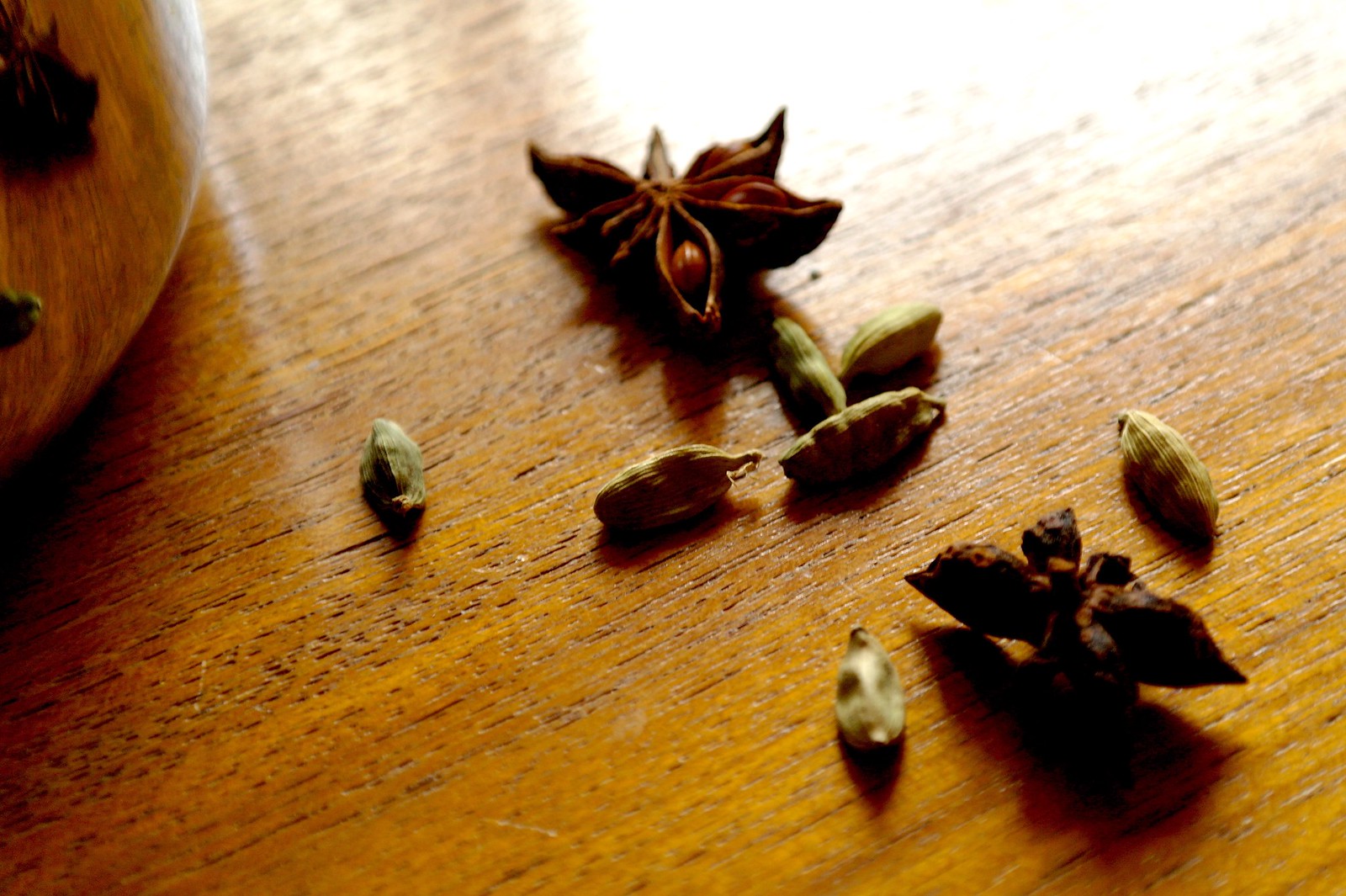 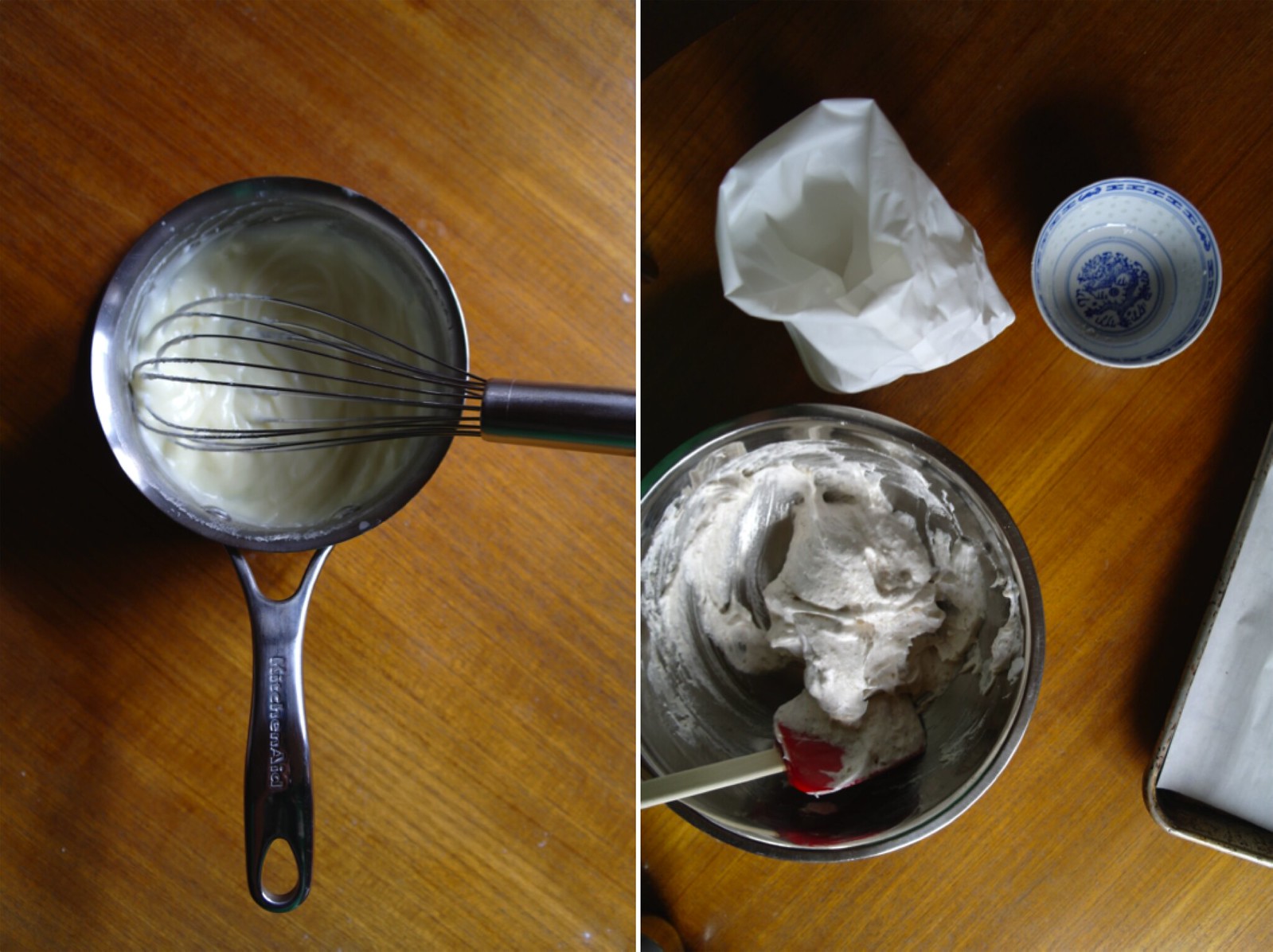 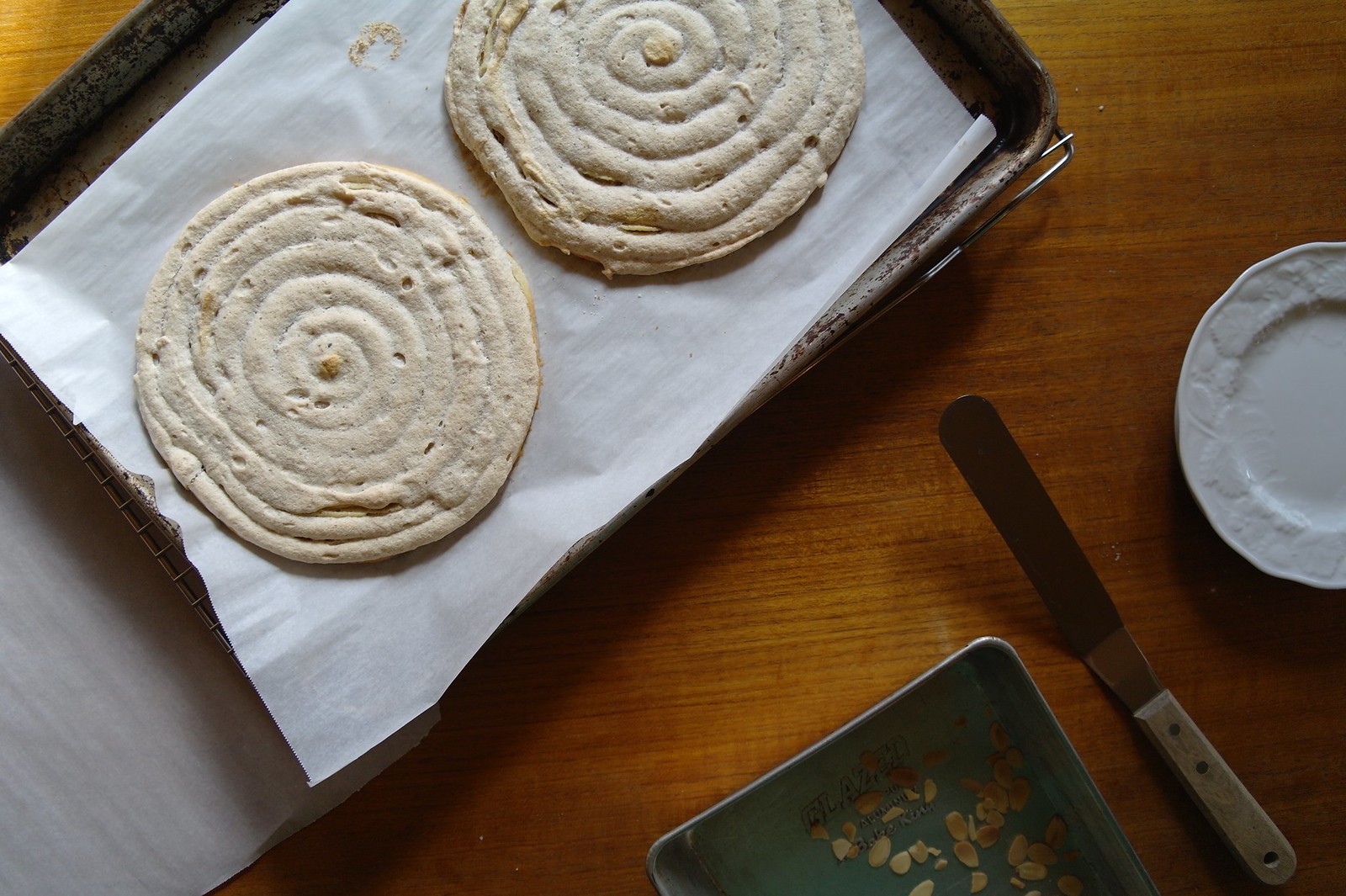 Recently, I think I’ve fallen for anise. Anise is one of those things that I used to pretend I liked (such as bittermelon and Stilton, both of which I still must pretend I like). I’ve changed my mind since then. I love anise in combination with milk and with chocolate, and here I also used cardamom–I think the two spices get along splendidly. 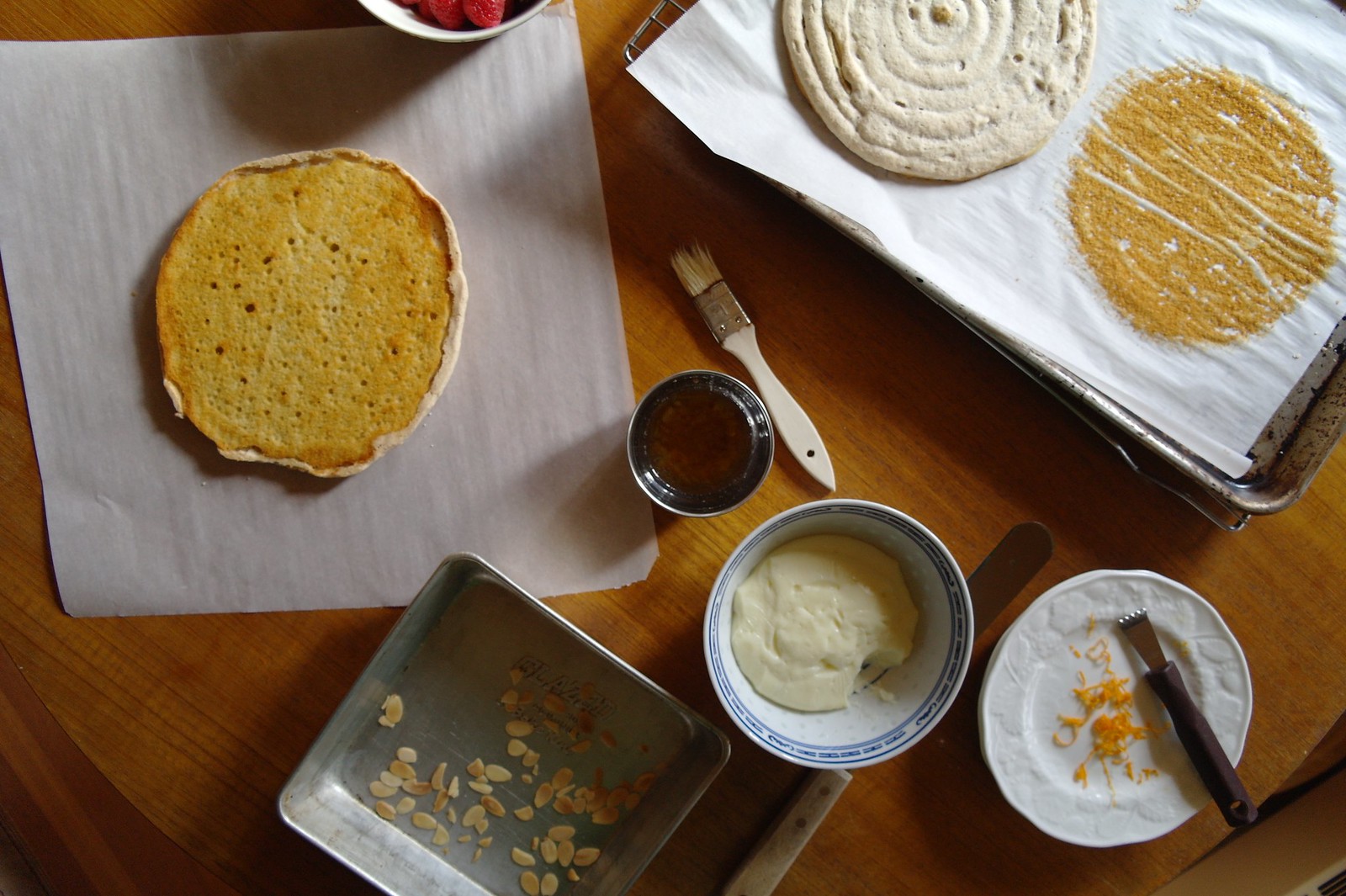 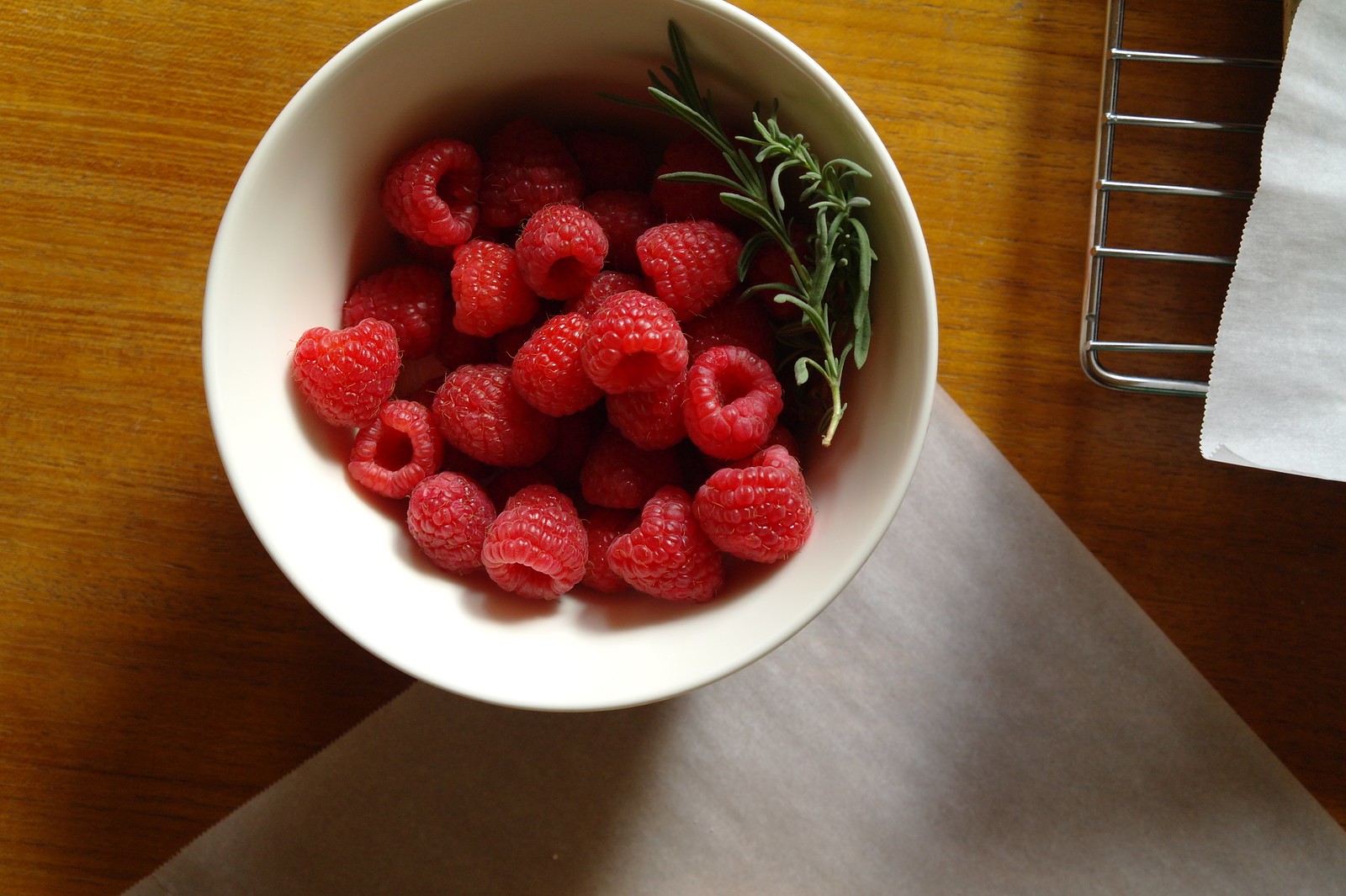 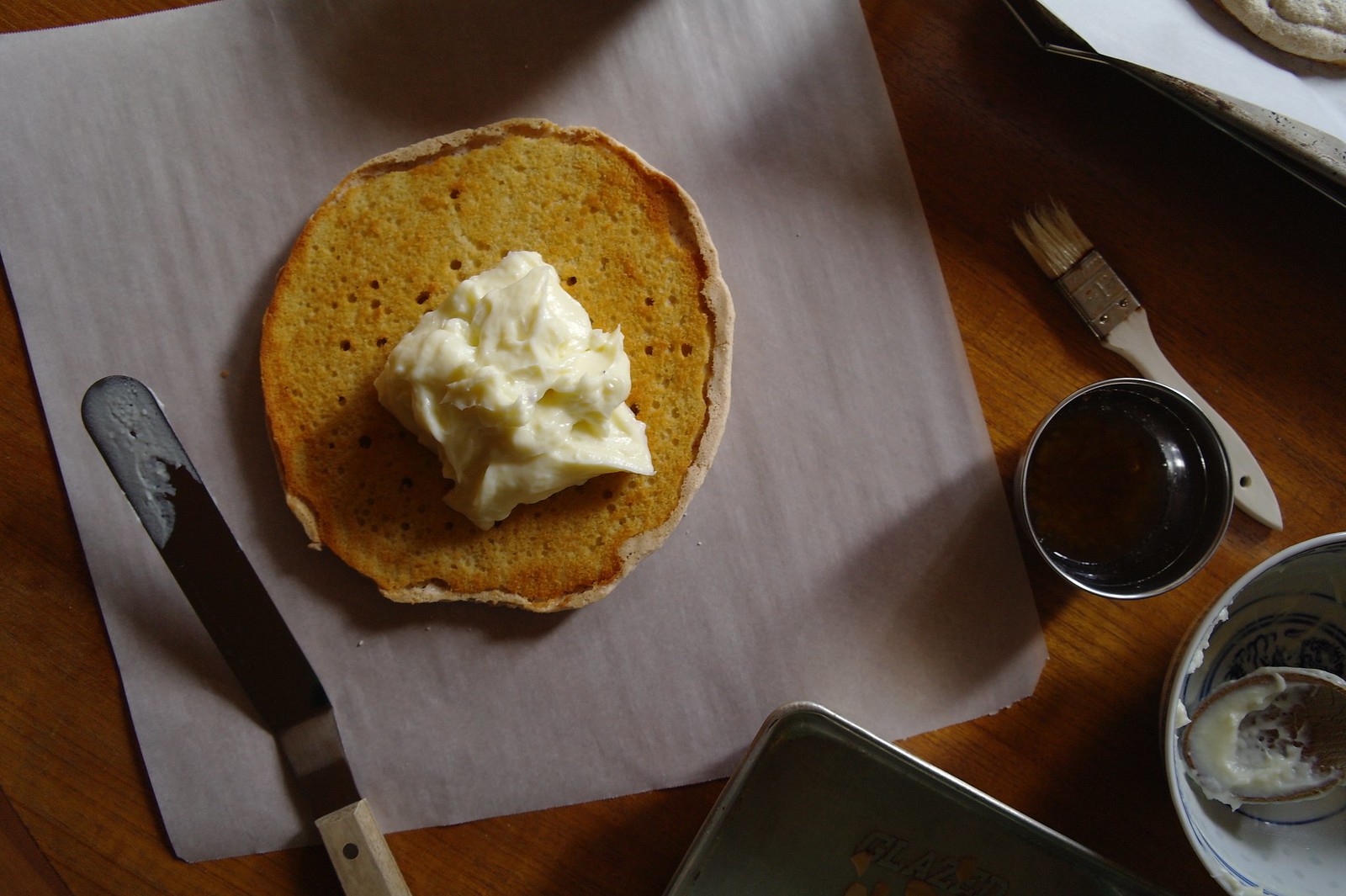 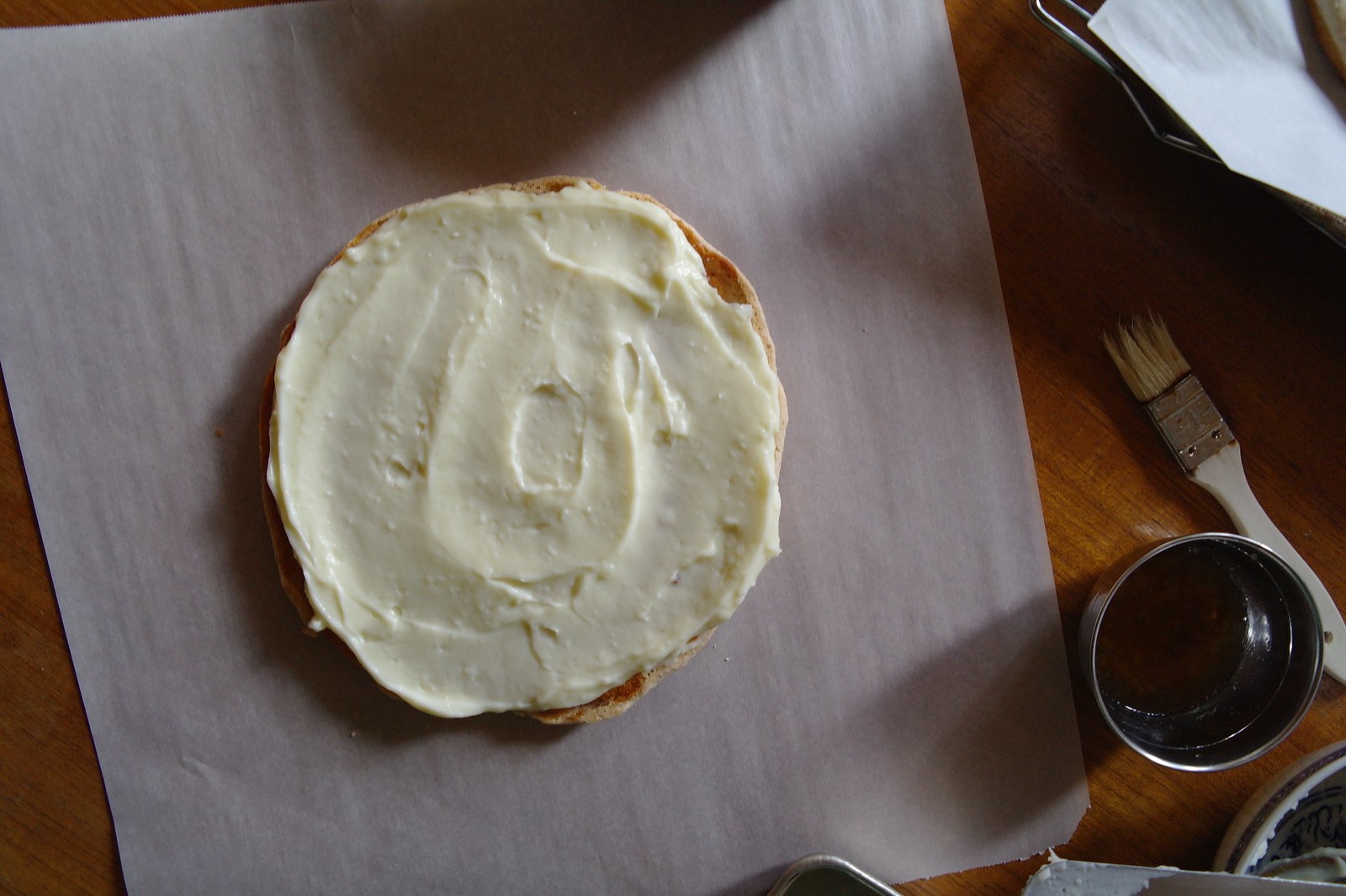 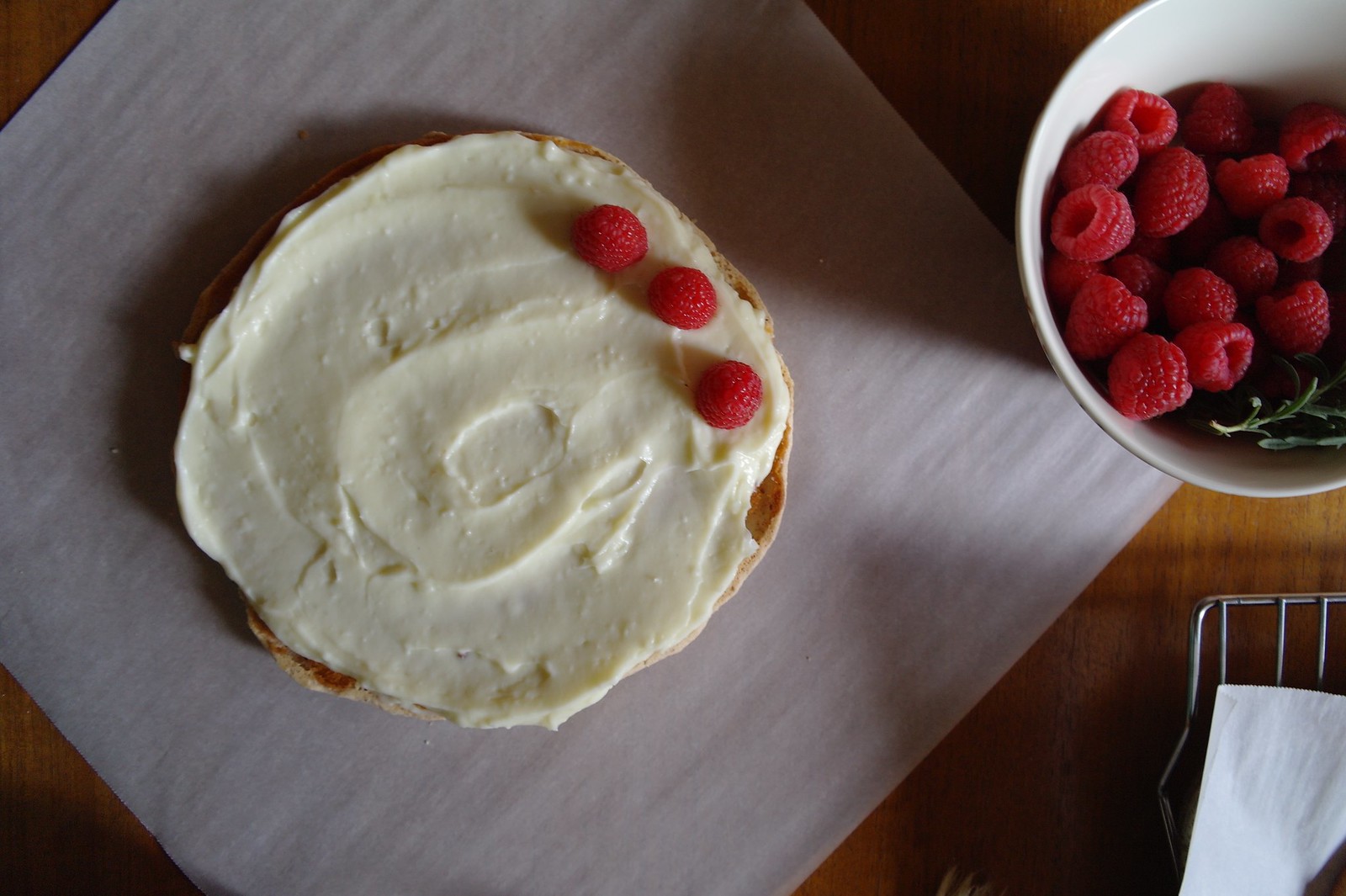 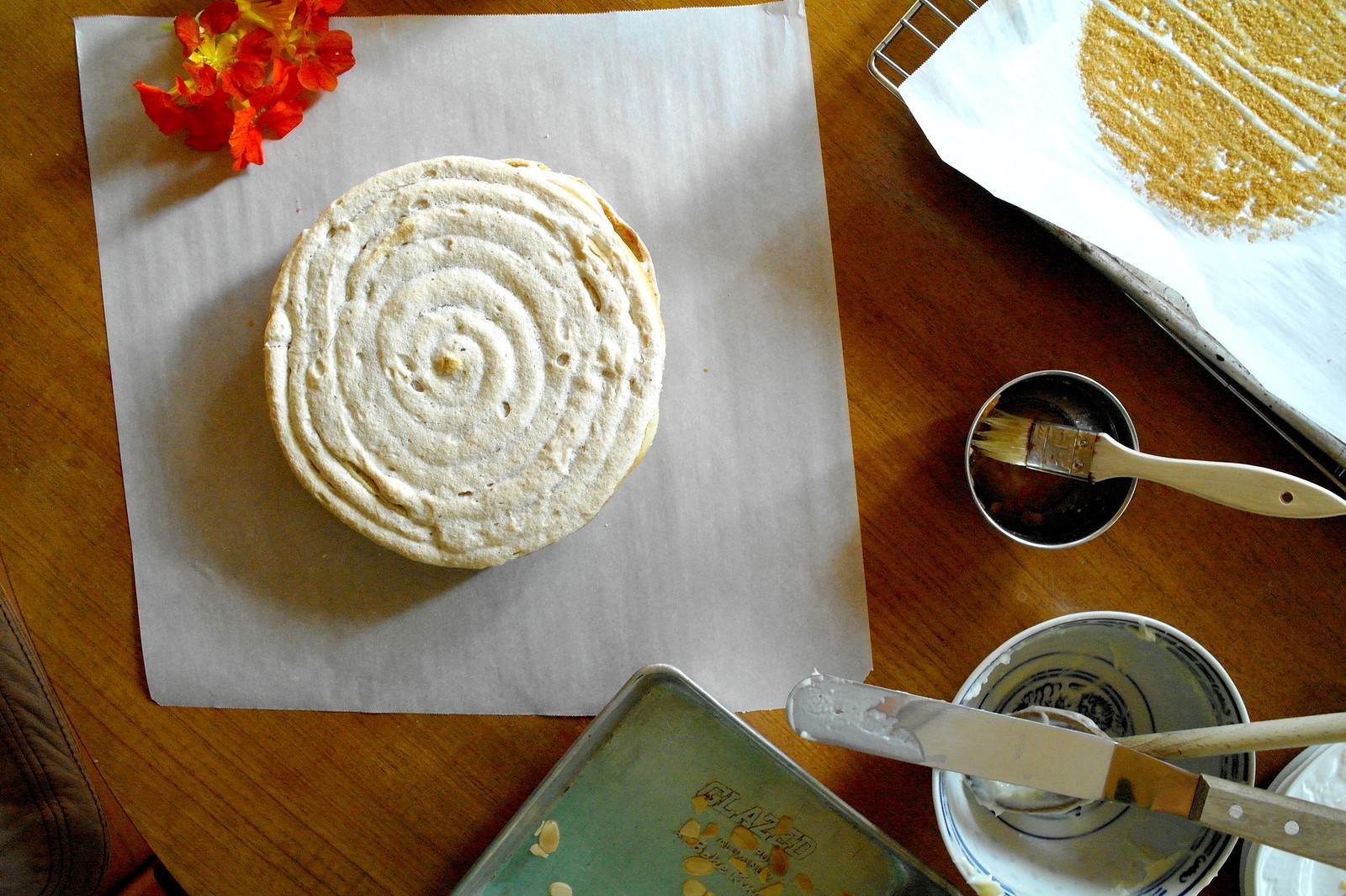 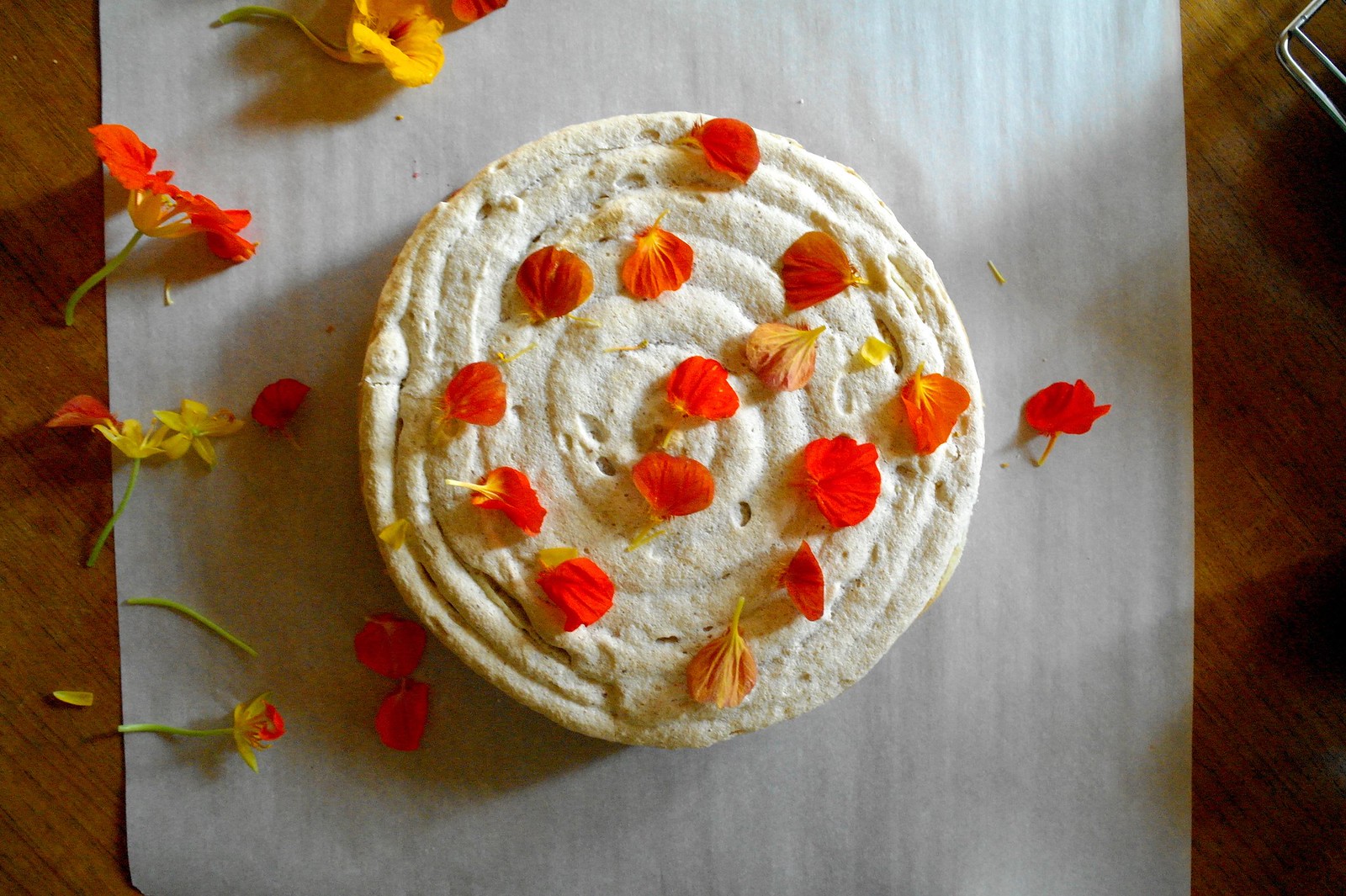 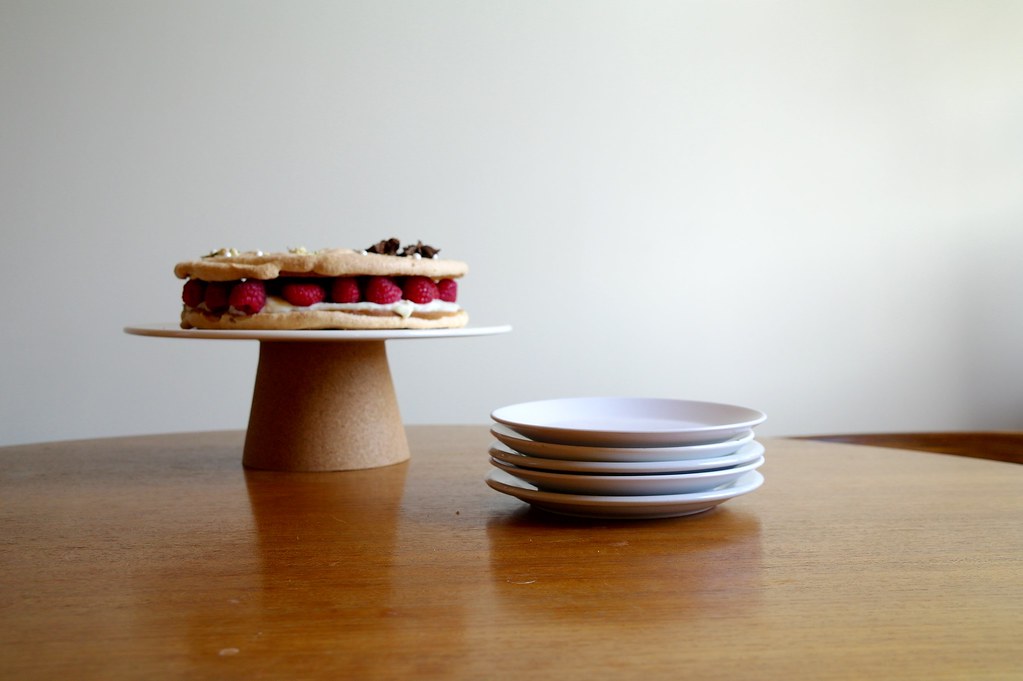 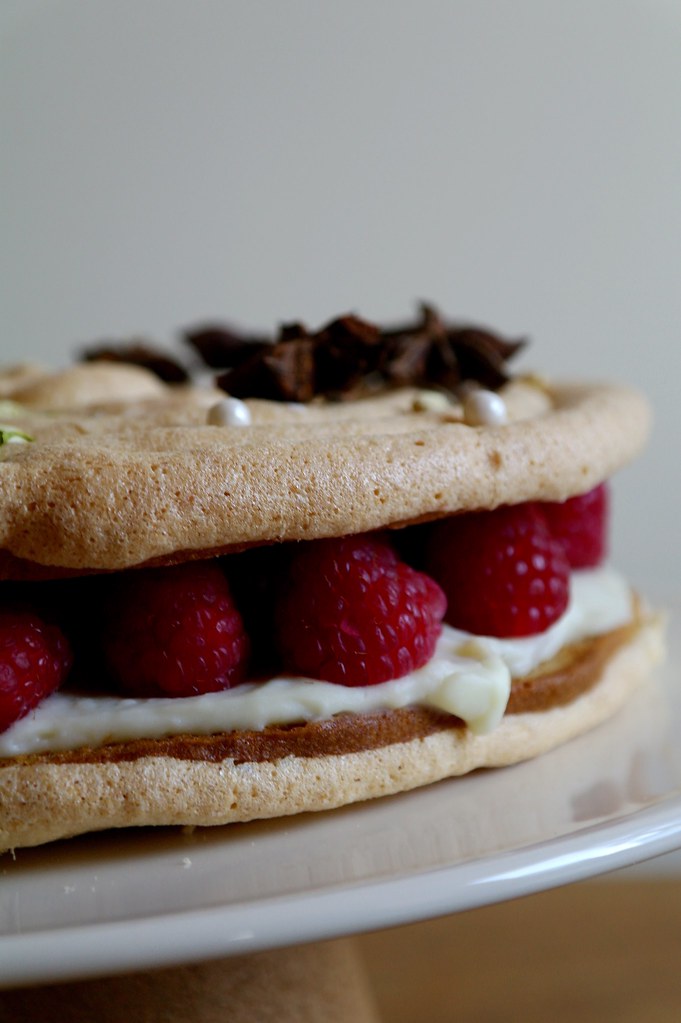 The base is a very buttery and tender cake with a layer of crisp meringue, and in between, piled with fruit and pastry cream. With the thin layers of cake and meringue, the overall result is a delicate and light cake. Texturally, it’s delightful having so many different components, and the raspberries ensure it’s also a bit refreshing.

I found the cake is good just made or after being chilled–everything comes together a bit better and the top layer still retains a slight, slight crispness. It’s analogous to the transformation of a macaron before and after refrigeration, though the cake pre-refrigeration is deserves more credit! 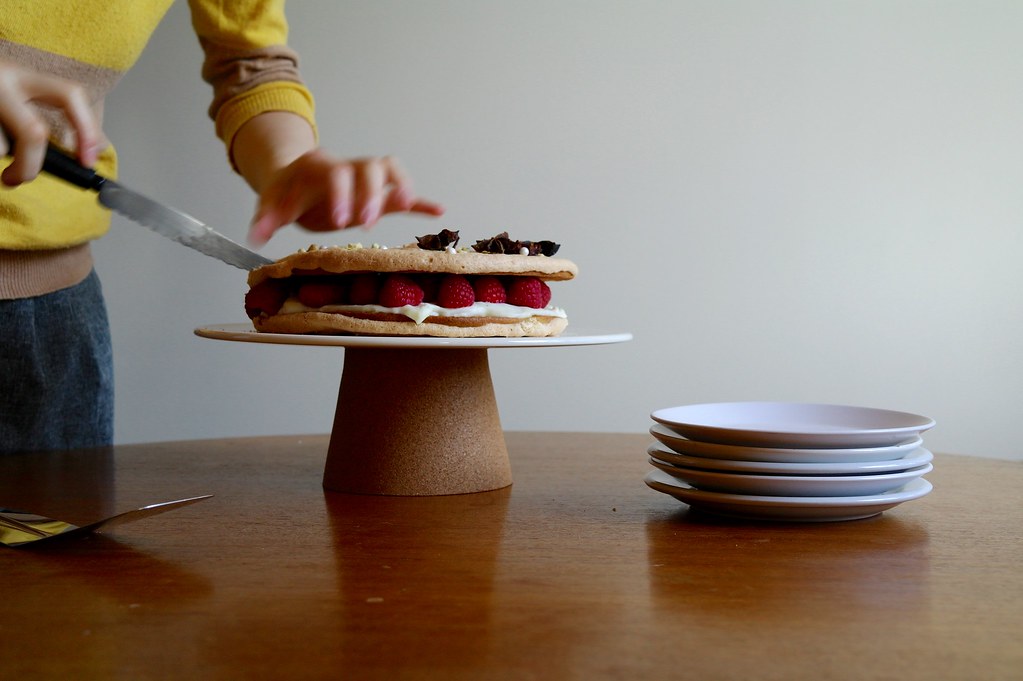 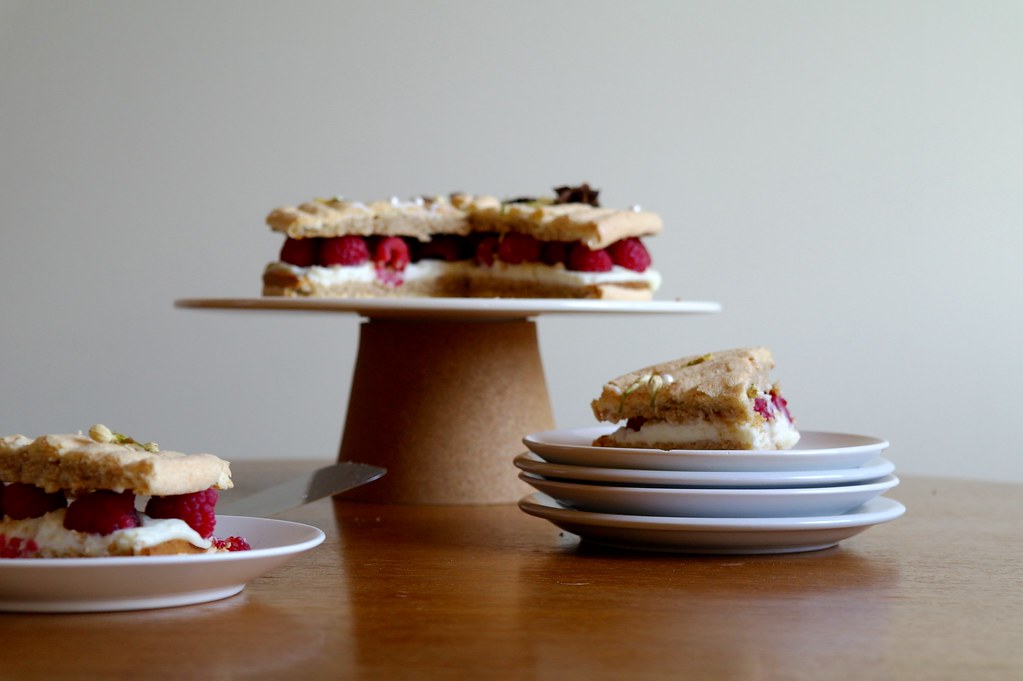 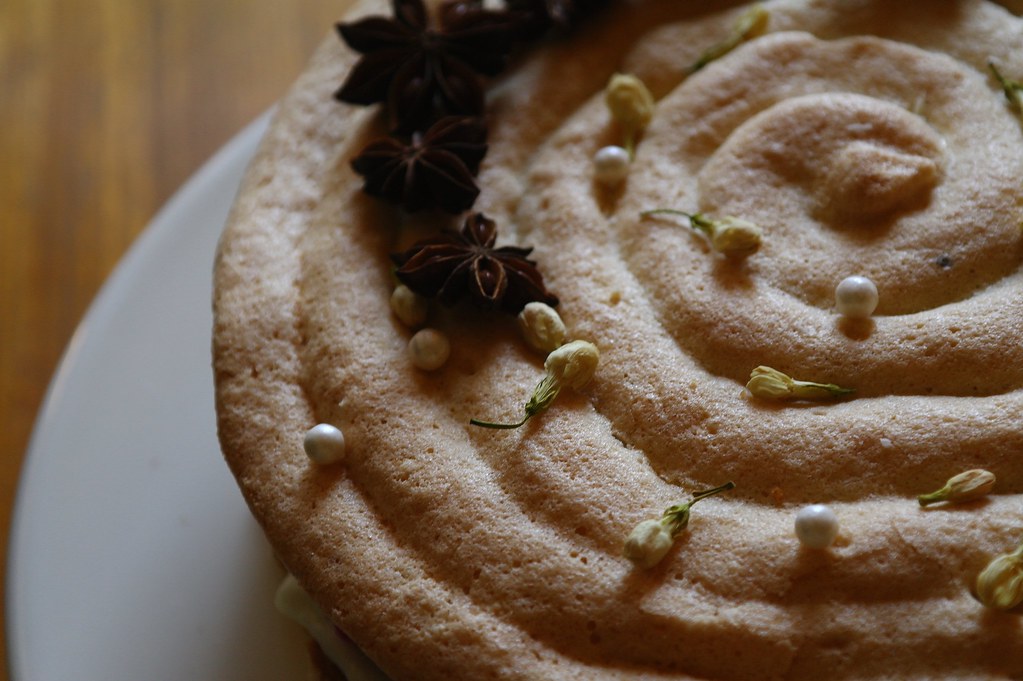 There are two sets of pictures here (you can differentiate the end products by the flowers or miscellaneous things on top) because I’ve made the cake twice and with some minor tweaking the second time. I’m quite happy with it.

As for future returns to the cake… the meringue could be made with different nuts (say pistachio or walnut), the cake could take some different flavours (easy shots are matcha or cocoa powder), the cream of course could be infused with any number of things or have a bit of liqueur, and swap in whatever fruit happens to be around. 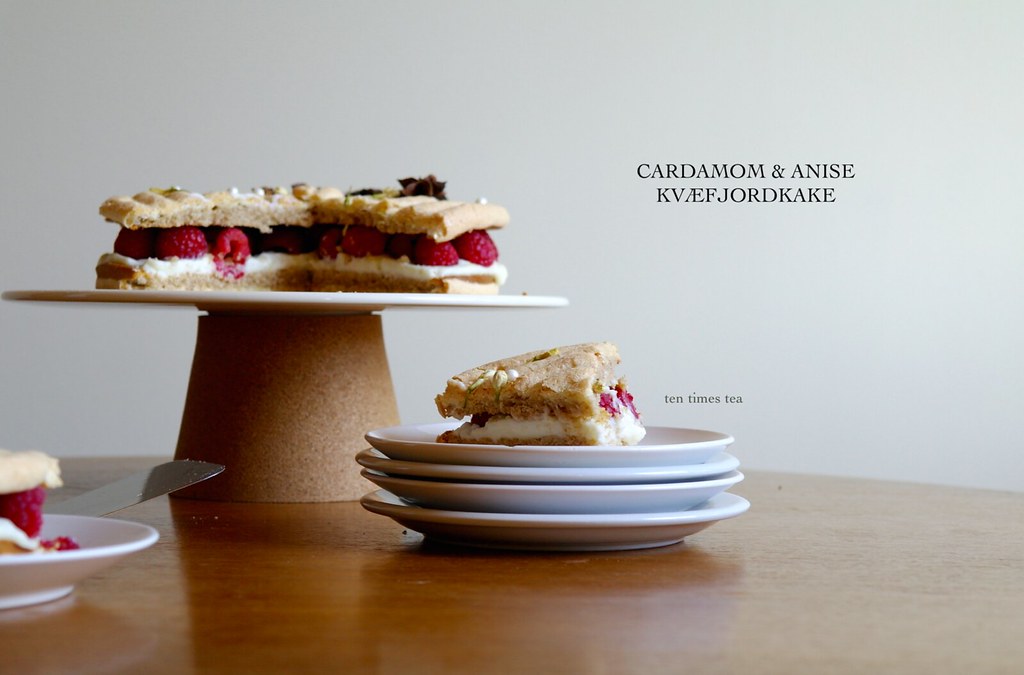 Adapted from Norwegian Cakes and Cookies by Sverre Sætre. The meringue is piped overtop of the cake batter, and then the whole thing baked all together. To prevent the cake from being too tough or the meringue from collapsing (neither of which happened despite my usual bumbling and slow actions, so perhaps it’s not that big a concern), it’s useful to coordinate the two components. For that reason, I have made one set of instructions for both the cake and the meringue.

You’ll have extra meringue. I think you could scale it down to 2 egg whites, but you might be a bit short.

Preheat the oven to 375F. Line a pan with parchment paper and trace two 18-cm diameter (7″) circles. Alternatively, to prevent the circles from running together, do this step on two separate pans.

At this point, if you have a stand mixer, you can start beating the egg whites (for the meringue), beating them until frothy and then gradually adding the granulated sugar (for the meringue). Divide the cake batter in half, and spread out each half with an offset spatula, into a thin even circle, following the lines you traced earlier on the parchment.

Return to the meringue, beating the egg whites until they hold stiff, voluminous, smooth peaks. Whisk the almond and icing sugar to loosen the mixture, and fold into the egg whites. Fill a piping bag fitted with an Ateco 804 or Wilton 2A tip (equivalent courtesy of this handy reference). Slowly pipe a spiral overtop of each cake layer.

Bake for 20-30 minutes or until the bottom of each cake layer is nicely golden, and the meringue crust is crisp and set. If you have extra meringue (which you will), you can pipe some test meringues on the side–the outside will be crisp and the inside still soft.

Heat the milk and cream with the spices until it comes to a boil, turn down, cover, and let steep for 30 minutes. Remove the spices.

Whisk together the egg, cornstarch, and sugar. Heat the milk until steaming, whisk a portion into the egg mixture, and then transfer the egg mixture to the saucepan. Continue cooking, whisking constantly, until the cream thicken. Press through a sieve if necessary, and place the mixture in a bowl, cover and let cool.

Place some sliced almonds in a pan and set it in the oven after the cake is baked–it can toast as the oven cools down.

To assemble, choose one cooled cake layer to be the bottom. Place it upside down, spread generously with the cream, dot with berries.

Place the second cake half right side up to sandwich the mixture. Cover your horrendous piping (not that you will have to worry about this) with toasted almond slices, long curls of orange peel, lavender leaves, and nasturtium petals OR star anise, jasmine flowers, and dragées.

In other kvæfjord cakes, Food52 has a gorgeous, high and puffy banana-spice version! Wow!